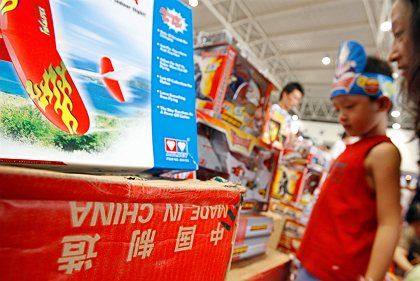 China has said it will introduce new rules to improve the safety of its toys, as the country's massive industry faces international condemnation over its exports.

It was her first major trip abroad, and the European Union's commissioner for consumer protection, Meglena Kuneva, found much of what she saw in China delightful. She was led through factories where cheerful seamstresses produced cuddly teddy bears for European children. In pristine laboratories, white-clad scientists demonstrated the care China takes to ensure that the goods that leave its shores are safe. It was a pretty presentation -- but Kuneva didn't buy it 100 percent.

The EU envoy had reports in her possession that showed the Chinese in an entirely different light. They depicted a country that regularly dumps cheap and hazardous toys and food products on Europe, and an export nation with a strong interest in European consumers' money but a somewhat weaker concern for their desire for products that are safe.

Reports in the media over the last few weeks about problems with Chinese products are enough to discourage almost any consumer from making a trip down to the department store or supermarket. American toy producer Mattel recalled 1.5 million toys made in China because of fears they might contain hazardous levels of lead paint; some of those toys made it onto German store shelves. Children's crayons were discovered with a heavy-metal content 17 times higher than the level allowed. Toy telephones were imported from the Middle Kingdom with volume levels high enough to damage children's hearing. At present, one in two of the consumer products the EU finds fault with originates in China. Inspectors detected problems more than 300 times this year alone.

China will likely rise to the rank of the world's leading export nation next year, but many consumers are less than satisfied with its products. Just a few weeks ago, an electronics distributor from Tübingen in southern Germany had to remove a Chinese remote control from his catalog because the device caught on fire when it was tested.

Foods imported from Asia can also pose a danger to supermarket customers. Leading German consumer safety group Stiftung Warentest recently took a closer look at 25 Asian sauces. The test results were sobering. Out of the Chinese-made sauces alone, five contained dilutents which are carcinogenic and can cause genetic damage.

A Problem Which Can No Longer Be Ignored

The problem has grown to such proportions that politicians can no longer ignore it. The EU is one of China's most important trading partners. Goods worth €48.8 billion ($67.3 billion) were sold to Germany alone in 2006. In the United States, the second-largest market for Chinese products, junk goods from Asia have long been a front-page issue.

Just a few weeks ago, an American food company pulled the vegetarian snack "Veggie Booty" from the market because it was suspected of containing salmonella-infected ingredients; more than 50 children had gotten sick. This spring, thousands of dogs and cats died because a pet food produced by the Binzhou Futian Biology Technology Company contained the toxic substance melamine, which had been added to create the appearance of higher protein content.

So far, the leadership in Beijing has responded to the criticism from abroad with a mixture of ignorance and severe penalties. For example, Chinese authorities rejected US complaints about tainted toothpaste as "unscientific." Shortly thereafter, Zheng Xiaoyu, the former director of China's State Food and Drug Administration, was executed for corruption. 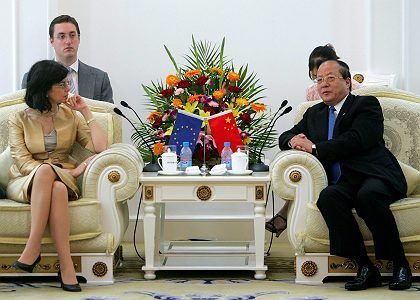 EU Consumer Protection Commissioner Meglena Kuneva in talks with Li Changjiang, minister of China's General Administration of Quality Supervision, Inspection and Quarantine. "I don't want to use the word sanctions," she says, "but Europe would not hesitate to impose them if necessary."

Consumer Protection Commissioner Kuneva now wants to ensure that the Chinese government forces companies in the country to observe stricter safety standards. To this end, Beijing was granted access to the European early-warning system for hazardous products in 2006. The Chinese minister in charge of product safety, Li Changjiang, has assured the Europeans he will present a detailed report by October on how his government plans to get a handle on the problem.

If the EU isn't satisfied with the report, European Commission President Jose Manuel Barroso will raise the issue himself with Chinese Premier Wen Jiabao, probably during his visit to China in November. "I don't like to use the word sanctions," consumer protection chief Kuneva says, "but Europe will not hesitate to impose them if necessary."

'China Must Adhere to our High Standards'

All the reports on dangerous food out of China have also dismayed Germany's own minister for consumer protection, Horst Seehofer. China must "adhere to our high standards," he has said. A six-page memorandum from his ministry states that the EU-wide warning system for food hazards has registered 23 cases of contaminated goods from China this year alone -- more than twice as many as during all of 2006. Even Germany's BND foreign intelligence agency has gotten involved with the issue. It has informed Seehofer's ministry that 60 percent of all counterfeit medication on the European market originates from China.

But imposing strict sanctions on China would be difficult, since the country is an important client for German exporters. German heavy-equipment manufacturers alone exported goods worth €7.5 billion ($10.4 billion) to China in 2006. Overall last year German companies racked up sales worth €27.5 ($37.9 billion) from shipments to China alone.

When Pushed in Corner, Chinese Fight Back

The sensitivity of the Chinese when it comes to outside pressure is illustrated by several cases involving the United States. The Americans recently put an import ban in place on some types of fish, and US Secretary of Commerce Carlos Gutierrez demanded that Beijing impose stricter controls on its exports. The communist leaders reacted promptly -- imposing an import ban on US pork and chicken, allegedly because of prohibited animal feed additives.

For now, German Consumer Protection Minister Seehofer is counting on China to take steps on its own to increase product quality levels. Until then, he hopes, controls by European authorities will ensure that toys tainted with heavy metals don't end up in shopping baskets too often. He says the inspection system has shown itself to be effective.

For example, the Lower Saxony State Office for Consumer Protection and Food Safety examined 1,500 imported goods for hazardous substances -- just 25 of them came from China. "The country was not the focus of our interest," a spokeswoman admits.

But even when authorities do identify a problem case, a comprehensive, long-term inspection process does not always automatically follow. Several years ago, a growing number of peanuts began showing up which were contaminated with aflatoxin, a carcinogenic substance produced by a species of fungus. Inspections were intensified for a brief time, but now only one in ten shipments from China is controlled, just as before.

Even when German labs do discover hazardous substances, provincialism can stand in the way of effective action. Last summer, inspectors in the city of Wolfsburg examined suspicious crawfish from China in one supermarket and found the product was contaminated with a strictly prohibited antibiotic, chloramphenicol, and not for the first time. State authorities determined that the product came from one of the supermarket chain's central warehouses in the neighboring state of North Rhine-Westphalia. They warned authorities there, but little action was taken. Local inspectors didn't feel it fell within their area of responsibility since the crawfish had been imported via the Netherlands and had also been processed there.

"We can't allow German federalism to prevent effective monitoring," says Sylvia Maurer from the Federation of German Consumer Organizations -- leaving aside the fact that regulation in the Netherlands is apparently lax as well. While the guidelines for what is allowed to enter EU are set in Brussels, inspections in Germany are carried out by the federal states. They sometimes perform the task well; sometimes they don't. It's a problem that the European Commission has already pointed out in a number of internal reports. Unfortunately, EU member states have "no harmonized approach to official inspections."

Ultimately, it is up to the diligence of local inspectors to ensure that people are protected from poisonous products from China. During one routine inspection, food inspectors in the state of Baden-Württemberg discovered the pesticide isofenphos -- illegal in Europe -- in Spanish bell peppers. In the course of their investigation, they discovered the poison had likely been shipped from China to Europe in mineral water bottles. It was then used to combat an insect infestation in the Andalusian vegetable growing region of Almeria -- on the cheap.

Sometimes the EU seems to make it easy for Chinese low-cost manufacturers to get their hazardous goods to European consumers. For example, many people believe that Europe's "CE" label on household appliances is only allowed to be printed on products that have been subject to official inspections. But in reality, any producer can slap this label on his cheaply made toaster or water wings if he is of the personal opinion that all EU guidelines have been followed. It's an open invitation to deceit. "The CE label," says consumer protector authority Maurer, "is abused by Chinese companies unscrupulously."