The black pickup truck races through the narrow streets of Aleppo's historic center. Old men are sitting in the shade in front of their houses as if it were peacetime. Yassin skillfully maneuvers the truck around them. The young fighter with the Free Syrian Army (FSA) is wiry, tall and has his head almost completely shaved.

He speeds through the Bab al-Nasr, a gate that was once part of the city wall of ancient Aleppo. "We just captured this area today," he shouts over the engine noise. "The government troops had to retreat toward the center of the city." Yassin comes to an abrupt stop in an arcade.

Driving any farther would be deadly. "Snipers can see into this arcade. They're just around the corner on the right, very close by," he says. A grenade coming from the Citadel, an imposing medieval fortress on a hill, hisses through the air above the neighborhood and lands farther back. "The soldiers up there won't be able to hold out much longer," Yassin says. "They're not getting any supplies. We have them surrounded."

Yassin is a member of the Liwa al-Tawhid, or Brigade of Unity, part of the FSA. The brigade operates primarily in the eastern and central sections of Aleppo. Like most of the fighters with Liwa al-Tawhid, Yassin is from the surrounding area and didn't know his way around the city when the FSA advanced into Syria's economic capital about three weeks ago.

The battle for Aleppo, Syria's largest city, is of critical importance for the Syrian rebellion -- as well as for the future of the country and possibly the region, as well. President Bashar Assad has declared the struggle for Aleppo the "mother of all battles," and his troops are fighting with everything they have. The military controls the center of the city, the north and the far western section, while the rebels have taken hold of the other half. If Assad's troops do not drive them out, they could turn Aleppo into the seat of a rebel government.

Yassin ducks as army snipers fire across the street. He grabs his assault rifle, runs out from the protection of the arcade and fires back two or three times. Other rebels are positioned across the street. They provoke the soldiers by setting posters of Assad on fire and tossing them into the street.

Civilians keep getting caught in the middle of these unpredictable firefights. Three men and a boy carrying shopping bags are on their way home, and they have to cross the street, directly through the line of fire. They start running together. A bullet hits the oldest man in the left arm. Yassin zips over to him in a white car, pulls him into the passenger seat and speeds back. The wounded man moans, but luckily there is a hospital less than 10 minutes away, in the Shaar neighborhood.

The nurses there place the man on a chair and begin cleaning the exit wound. A girl, perhaps 3-years-old, lies dead on the floor next to the chair, her face and clothing covered with gray dust. The child's feet were torn off by an aerial bomb dropped by Assad's forces. At the moment, no one has time to tend to the body.

Assad's jets are attacking rebels in the city with increasing frequency, dropping bombs and firing rockets and aircraft cannon. They also attack at night, and there is no protection against them, especially for children, women and the elderly. Hundreds of people are fleeing the city every day, creating a stream of Syrian refugees that is even further destabilizing the region. According to the Reuters news agency, Jordanian and Syrian troops clashed on Friday night when refugees were trying to cross the border.

In Aleppo, rebels and army forces waged an especially fierce battle over the Salaheddin neighborhood last week. Nur al-Islam, a 24-year-old English teacher, is sitting in front of a computer nearby, at a desk in a police station that now serves as the headquarters of an FSA unit. Fighters on the steps in front of the building are preparing six welded steel pipes packed with explosives. The improvised bombs are capable of destroying a tank, as long as they can be brought close enough.

Nur al-Islam has become accustomed to such scenes. She works for the rebels as a computer expert, and she also organizes accommodations, distributes food and bandages the wounded. She is one of the few women among the rebel ranks.

Her parents still support Assad, says al-Islam. "But I was sympathetic with the opposition from the very beginning. I can't understand why my parents want to give up freedom. But Aleppo is a stronghold of Assad supporters."

A group of fighters show up to stand guard. They have brought with them five wounded men and a dead one.

Al-Islam goes outside to photograph the body with her cell phone. The fighters want to remember their fallen comrades, but there are many of them. They have to be photographed so they won't be forgotten. 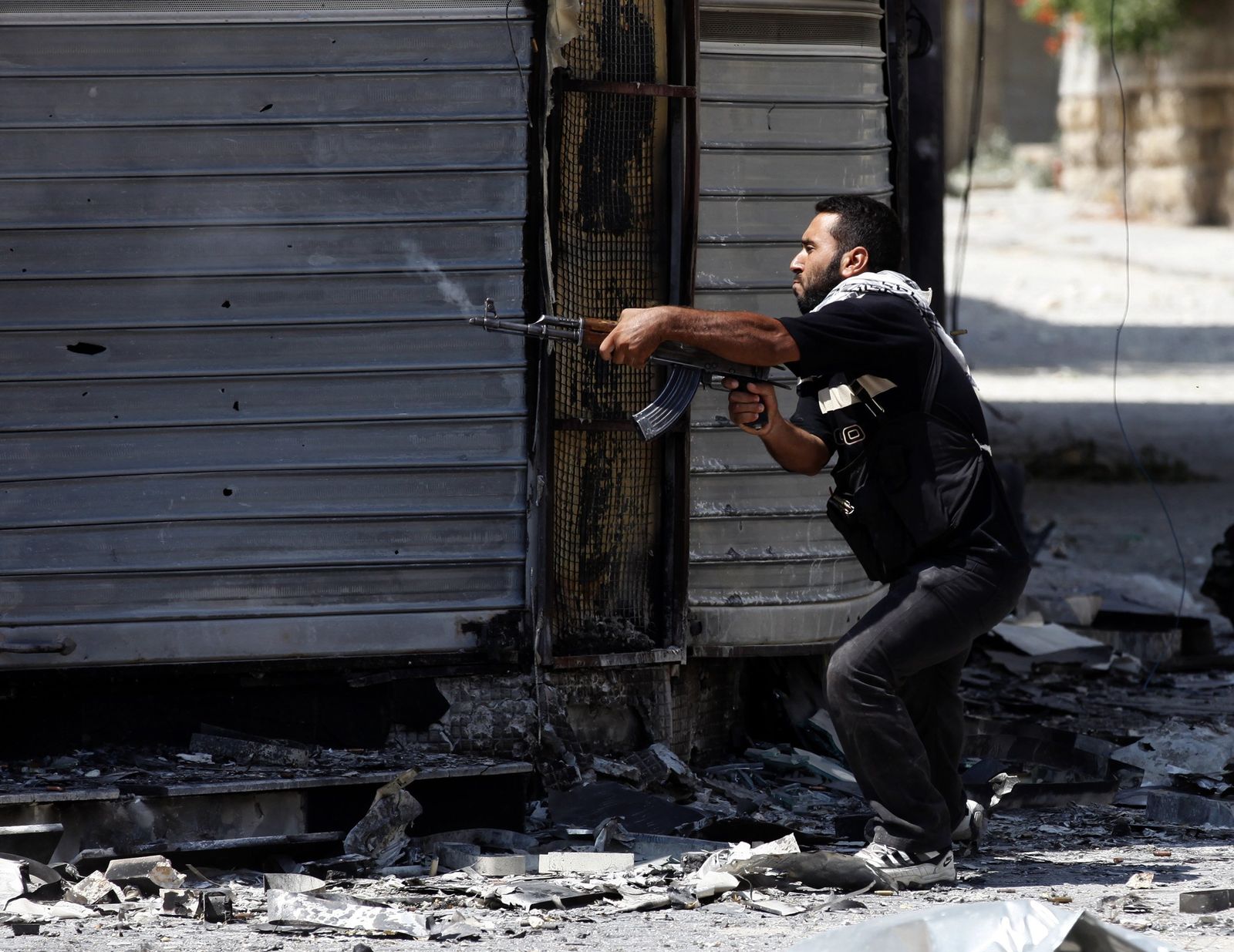