To get into the in Cancun, you first have to go through a chain-link fence, then pass police and soldiers with machine guns. Once you get that far, you find yourself in the middle of the conference -- and a participant in a gigantic experiment in civilization.

At UN climate summits, thousands of people are locked up in spaceship-like convention centers for two weeks. Then they are jammed into over-stuffed halls with no natural light, and are forced to survive on wilted sandwiches. They are worn down with endless acceptance speeches completely lacking in any substance. Their defenses are broken down through a bombardment of working groups and abbreviations. Meanwhile they are placed under ever-increasing time pressure.

Can such an experiment really end in success? Can it get 194 countries to agree on limits for how much oil, coal and gas they are allowed to consume, how much cheap meat they can produce and how much forest they can cut down for quick cash? Is it possible within this artificial environment to find a solution to the question of how many degrees the Earth should be allowed to warm up over the next few centuries?

Make no mistake: It is a huge step forward that such conferences have been taking place since 1994. Climate summits demonstrate that people are indeed able to think beyond the immediate future -- after all, the issue here is not finding the appropriate response to an acute emergency, but about coming up with intelligent preventive measures. And the fact that Americans work with Africans, Germans with Indians, and Chinese with Brazilians at such summits is a sign that collective cooperation is possible despite many differences. That alone is a great -- albeit fragile -- achievement.

A Symbol of Western Extravagance

But in the Moon Palace in Cancun, where the political negotiations are being held, it is easy to forget all of that. Even the venue can seem like a travesty. The Moon Palace is a luxury hotel whose pools, bars and sterile lawns cover an area that was previously home to species-rich mangrove forests. Ironically, questions of survival that affect millions of people are being discussed in a place that symbolizes Western extravagance. It's no wonder that, in this artificial five-star environment, there is not much direct talk about disappearing rainforests, polluting power plants and starving people. The problems are concealed behind pleasant-sounding acronyms like LULUCF, AWG-LCA and REDD.

The negotiating process has become so complicated that even Todd Stern, the US's chief negotiator, was forced to admit earlier this week that he didn't have an overview of the current situation. 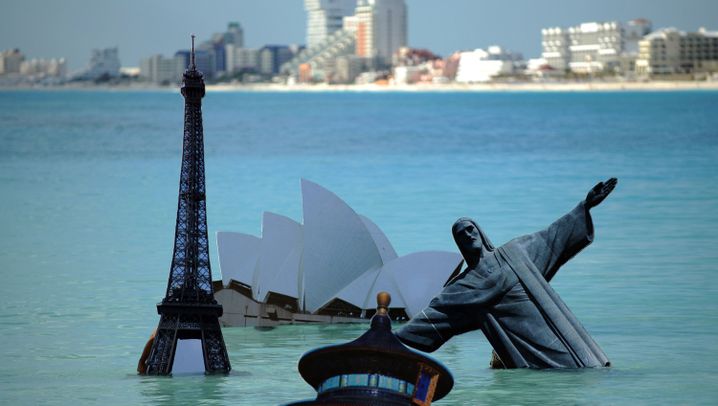 The climate negotiations have split into many different branches and become grotesquely complicated. It's a development that especially benefits those who do not want to see progress being made. It already puts poor countries with small delegations at a disadvantage, because they can not simultaneously attend the many dozens of parallel forums.

In addition, the negotiation process involves the exact opposite of the sustainability that is invoked here hundreds of times every day. The negotiators -- the people who do the real work -- look grayer and grayer every day. In the end, everyone is so exhausted and burned out that decisions come to depend partly on pure physical stamina -- as if the climate summit were an Olympic event.

Is the UN Summit the Right Format?

The drawbacks of the summit approach can also be seen in the language used. Most of the documents are worded as if they had been drawn up by a sect of overzealous lawyers. Even experts struggle to decipher them. That, too, is another factor that works to the benefit of those who want to block any progress.

But all the complications and problems would be fine if the climate summit could, in its 16th year, actually come closer to finding real solutions, such as upper limits for CO2 emissions, new business models to preserve rainforests and coral reefs, and technology transfer from rich to poor countries. Cancun is probably the last summit that could prove this is even possible. The level of impatience, frustration and cynicism increases with each unsuccessful conference that passes. And the UN approach to climate protection becomes more vulnerable with every pseudo-compromise that is reached.

Achim Steiner, the head of the UN Environment Program, said on Thursday that there are actually two summits in Cancun. One involves the official negotiators. The second summit involves concrete action on the ground and takes the form of the many forums and presentations that happen away from the actual negotiations. It involves, in other words, what environmental groups, companies and individual governments will do. That doesn't sound very promising for the official summit. Steiner also said that he hoped that at some point there would be a summit "without acronyms."

German Environment Minister Norbert Röttgen already said that "the United Nations as the format for such negotiations would be called into question" if there is no overall agreement in Cancun. He is a big fan of the United Nations and its summits, but Röttgen recognizes that it is possible that the limits of what can be achieved under the current approach might already have been reached long ago.

Locked Up on an Oil Rig

Some people now want to bring together only the biggest CO2 emitters, in a format such as the G-20, instead of inviting 194 countries, which always includes a few troublemakers. But that would inspire resentment from the rest of the world against this elite club -- after all, climate change will have the strongest effects on the poorest countries.

Another option would be to abandon the political approach altogether. Instead, negotiations would involve just those industries actually causing the unwanted emissions, such as agriculture, the automotive industry, or steel mills. But then there would be a lack of a legally binding international commitment.

There are even more radical proposals that involve locking up a few hundred negotiators in a kind of climate-protection prison -- perhaps on a unused oil rig -- with bad food and little sleep, until they have found a sustainable solution. But it is doubtful if a constructive working environment would exist under such conditions.

So how could the summit be improved? First, the UN officials and national environment ministers need to accept that the limits on growth also apply to environmental summits. These events do not become better and more important through bringing more and more people together and opening up ever more channels of negotiations. The famous principle of "small is beautiful" could also apply to climate summits. Simplicity and clarity would be the fundamental principles, and would be strictly adhered to. In Copenhagen, people praised the 40,000 participants and the hundreds of parallel negotiations -- and look how that ended up.

In the Middle of the Niger Delta

They could, for once, take place in a location where climate change is visible, such as on an island in the Pacific that is at risk of disappearing, in a slum in India, in the rainforest, or in the middle of the oil-contaminated Niger Delta. That would bring the delegates down to earth, and would also give normal citizens of the world a better view of what they are doing. That would help end suspicion that a tiny, elite group of people are trying to impose something on everyone else.

With such a format, it would also be a chance for the negotiators to work together with the people in the region -- preferably over real meals. Instead of the usual industrial plastic sandwiches, there should be regional food, freshly prepared from local natural resources. Other goals of the new format would be stimulation for the senses, clarity, intelligibility and trust.

In today's meetings, bureaucrats are simply commandeered out of their ministries and locked together in a room. In the future, before they get down to business, the negotiators could take joint tours of glacial landscapes, rainforests or any of the many sites where there have been environmental catastrophes. That would bind them together and would help to build up the trust that was so bitterly missing in Copenhagen.

Delighted to Be Leaving

Personal trust is the most important and, at the same time, the rarest commodity at a climate conference. The anonymous and gigantic format for negotiations has not succeeded in generating that trust. Naturally that's mainly due to the real problems of the real world. But one can still ensure that the individuals who are making important decisions about the environment at least get to know each other.

To make the texts more understandable, one could present them to people from the general population -- preferably the children and young people who will be making the decisions in the years to come. The negotiators could then explain what it is all about. Only when these auditors can understand the texts should they be put up for a vote. And one could incorporate a day when the negotiators have to swap positions: for example, the Chinese would negotiate on behalf of the US, the Indians for Germany, the Germans for the Ethiopians. That would help everyone see the world from a different point of view.

Maybe if a summit were organized in such a way, it would work better. The savvy summit regulars would laugh out loud at such proposals and would brush them aside as idealistic.

Still, when they leave the artificial world of the Moon Palace and its chain-linked fence behind them on Friday or Saturday, they will have a bad feeling about whether or not the climate-change resolutions they reached were really enough, and they will only have read and understood a portion of them.

They will, however, be delighted to be leaving the summit. That is not a good sign for the largest and most important family reunion that humanity has to offer. 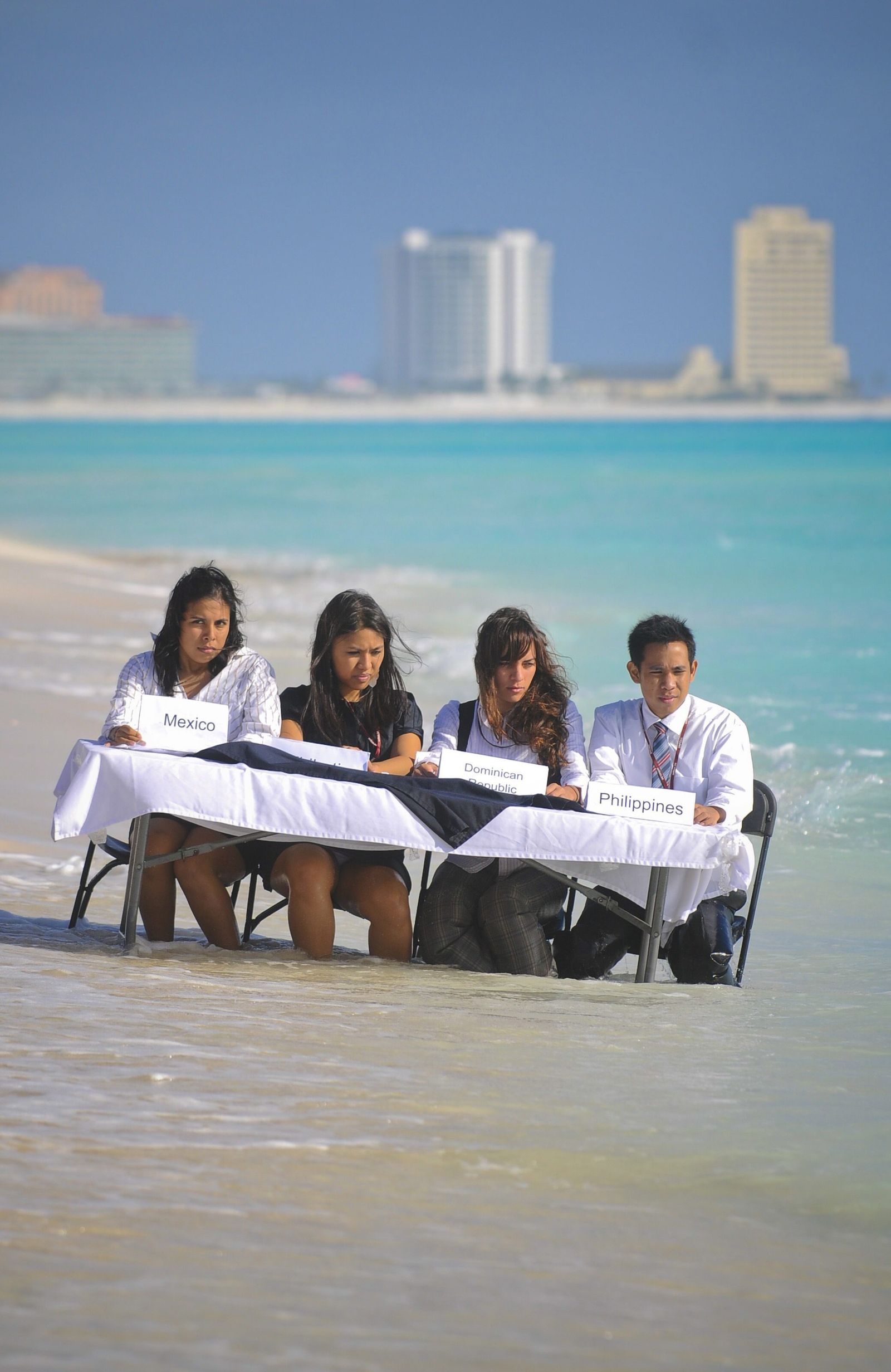 Activists protest at a beach in Cancun on the sidelines of the UN Climate Change Summit.