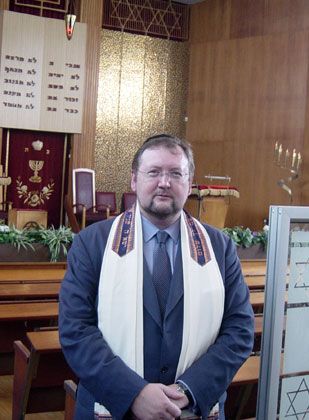 Rabbi Walter Homolka: "The Catholic Church does not have its anti-Semitic tendencies under control."

Around the world, millions of Catholics are celebrating Good Friday, when they commemorate the crucifixion of Jesus Christ. But for many Jews, this year's ceremonies leave a bitter aftertaste, due to a controversial new version of a prayer that many claim is anti-Semitic.

Last month, the Vatican announced that Pope Benedict XVI had revised the so-called "Good Friday Prayer for the Jews" which forms part of the Tridentine Mass, often referred to as the Latin Mass. The new version, translated from the Latin, reads: "Let us also pray for the Jews: That our God and Lord may illuminate their hearts, that they acknowledge that Jesus Christ is the Savior of all men."

Several leading Jewish organizations, including the Anti-Defamation League, the American Jewish Committee and the International Jewish Committee on Inter-Religious Consultations, have strongly criticized the new wording of the prayer. However only the very small minority of Catholics who celebrate the Good Friday mass in Latin will actually hear the allegedly anti-Semitic version of the prayer.

The new wording is similar to the original version of the prayer, which read: "Let us pray also for the faithless Jews: that almighty God may remove the veil from their hearts; so that they too may acknowledge Jesus Christ our Lord."

This original version was toned down at the 1962-1965 Second Vatican Council which introduced many far-reaching reforms of the Catholic Church, including replacing the Tridentine Mass with vernacular liturgies. The Good Friday Prayer then became: "Let us pray for the Jewish people, the first to hear the word of God, that they may continue to grow in the love of his name and in faithfulness to his covenant."

In contrast to his predecessor Pope John Paul II, who was feted for his efforts to build bridges with other religions, Benedict has succeeded in alienating members of other faiths on several occasions since he took office in 2005. He offended Muslims with a 2006 speech at the University of Regensburg in which he quoted a Byzantine emperor who described Islam as violent. Many Jews were disappointed with Benedict's 2006 visit to Auschwitz, having hoped for a stronger message on the Church's role in the Holocaust. More recently, Jewish groups criticized Benedict's meeting with a notoriously anti-Semitic Polish priest in August 2007. The latest incident is likely to further jeopardize efforts to promote Catholic-Jewish dialogue.

SPIEGEL ONLINE talked to German rabbi Walter Homolka about why he considers the prayer to be offensive and the likely damage to Catholic-Jewish relations.

SPIEGEL ONLINE: Mr. Homolka, you -- and around 1,600 rabbis worldwide -- are sharply protesting the Vatican's revival of the Latin Good Friday Prayer, which reads: "Let us also pray for the Jews: That our God and Lord may illuminate their hearts, that they acknowledge that Jesus Christ is the Savior of all men." Do you consider Benedict XVI to be anti-Semitic?

Walter Homolka: He is trying to focus on the specific aspects of his church -- that's his duty. But in this case he has lost his sensitivity. It is insulting to Jews that the Catholic Church, in the context of Good Friday of all things, is once again praying for the illumination of the Jews, so that we can acknowledge Jesus as the savior. Such statements are made in a historical context which is closely connected with discrimination, persecution and death. Given the weight of responsibility that the Catholic Church has acquired in its history with Judaism, most recently during the Third Reich, this is completely inappropriate and must be rejected to the utmost degree.

SPIEGEL ONLINE: What is the effect of Benedict's new version of the Latin phrase?

Homolka: He indicates that he believes that the path to salvation, even for Jews, can only go through Jesus, the savior. This opens the floodgates for the conversion of Jews. The Internet is already full of comments by conservative, right-wing Catholics who say: "Wonderful, now we finally have the signal to convert the Jews." This kind of signal has an extremely provocative effect on anti-Semitic groups. The Catholic Church does not have its anti-Semitic tendencies under control.

Homolka: He is accepting them, at the very least.

SPIEGEL ONLINE: Isn't the current version of the prayer harmless compared with the original version from 1570, which was used for centuries? It suggests that the hearts of Jews are veiled, that they wander in darkness and that they are blinded and perfidious.

Homolka: I consider Benedict's version, too, to be more than unfortunately worded. He is making, on a central liturgical occasion, namely the Good Friday liturgy, a theological statement that Jews cannot help but perceive as aggressive and crass. Throughout history, Jews have repeatedly been subjected to persecution and death on Good Friday. Christians have often translated the message of Good Friday into the question: "Where are the murderers of Christ?"

SPIEGEL ONLINE: But wasn't this danger eliminated long ago?

Homolka: In 2006, the chairman of the General Rabbinical Council of Germany, Rabbi Henry Brandt, expressed himself in very clear words to (leading German theologian) Cardinal Walter Kasper. He said that any approach to the possibility of a mission by the Church to convert Jews is essentially a hostile act -- a continuation, on a different level, of Hitler's crimes against the Jews. These are strong but honest words. The Catholic Church should acknowledge the fidelity of God, who abides by his choice of the nation of Israel as his chosen people.

SPIEGEL ONLINE: Very few German parishes will use the Latin version of the prayer. Isn't your protest exaggerated?

Homolka: The issue is not where this extraordinary form of the prayer will be used. The pope, by choosing the wording himself, has made an important, precedent-setting change and has given it his personal seal of approval. In doing so, he deprives the acceptable 1970 form of the prayer of its credibility. The pope could simply have used that text for the Tridentine Mass: "Let us pray for the Jewish people, the first to hear the word of God, that they may continue to grow in the love of his name and in faithfulness to his covenant."

SPIEGEL ONLINE: Christianity is a missionary religion. Isn't it logical that it would also seek to convert Jews?

Homolka: No, because the controversial Good Friday Prayer completely ignores the unique status of the Jews as God's chosen people. God called us Jews to be a "light for the nations," so we certainly do not require illumination by the Catholic Church. The younger sister has clearly struck the wrong chord here.

SPIEGEL ONLINE: Jesus himself was of course a Jew and he proselytized among the Jews.

Homolka: Jesus put forward his arguments within the context of an internal Jewish dialogue. What the Church turned this into was something completely different. It made Jesus the rabbi into a deity. On top of that, it claims that the crucifixion of this rabbi is relevant to my personal salvation. Such teachings would have been news to Jesus.

SPIEGEL ONLINE: You see the new Good Friday Prayer as an offence to many Jews. With his speech in Regensburg, Benedict also hurt the feelings of many Muslims. What's behind all this?

Homolka: I cannot imagine that these were simple slips. What we have here is a captain on the bridge of his supertanker. A new course was set with the Second Vatican Council. Now the captain wants to turn around and set another new course within a short period of time. And one or two explosive devices are needed to get the ship into its new position. For the pope, the Church of the Second Vatican Council has lost too much of its power to retain the faithful, and university theology has become too feeble. This is why we are seeing these massive changes in the Catholic Church.

SPIEGEL ONLINE: But there have also been positive developments in the Catholic-Jewish relationship: the Catholic Church's admission of guilt, Benedict's visit to the Cologne synagogue and his meeting with Vienna's chief rabbi, Paul Chaim Eisenberg. And he also visited Auschwitz.

Homolka: In Auschwitz, he put forward a view (of the Holocaust) which made it sound as if neo-pagan forces had descended upon the German people and seduced them. After the Holocaust, Rabbi Leo Baeck drew a very different conclusion: What is the value of a church that could not assert God's fundamental teachings during the Third Reich? This makes the claim to absolute truth exhibited by Christianity seem rather absurd.

SPIEGEL ONLINE: Nevertheless, after World War II the Catholic Church sought to develop a good relationship to the Jewish people. Rome acknowledged that Christianity comes from Judaism, that Judaism possesses a promise of salvation from God, and that Jesus was a Jew.

Homolka: Yes, but there are also contradictory signals. During the canonization of Edith Stein, who was murdered (by the Nazis) because she was a Jew and was then elevated to martyrdom by Christians, part of the Catholic Church's aim was to make a Catholic out of a Jew. And now we have this affront with the Good Friday liturgy. I accept it when someone makes a personal decision to change faiths -- and this applies to both sides. The Christian-Jewish dialogue has come to terms with that. But a collective expectation of Judaism to acknowledge Jesus as savior is a heavy imposition.

SPIEGEL ONLINE: What is the point of a dialogue in the first place, if it is clear from the beginning that the two sides will ultimately be irreconcilable?

Homolka: The purpose of the dialogue is not unification or incorporation. We want to learn to understand each other. That includes avoiding insults like the one we have received in the form of the pope's Good Friday Prayer. I am afraid that, on the Jewish side, Jews will begin voting with their feet, and people will withdraw from the dialogue.

SPIEGEL ONLINE: How can things continue?

Homolka: Good Friday this year will be a black day in relations between Jews and Catholics. We are still waiting for a promised explanation from the Vatican. Four Jewish speakers have already cancelled their participation in the German Catholic Convention. Nerves are raw on the Jewish side. A few months ago, (Jewish intellectual) Micha Brumlik warned of an "ice age" and now it has arrived. Relations between the Catholic Church and the Jewish community suddenly face a crucial test of the sort that hasn't been seen in decades.

Interview conducted by Alexander Schwabe. Translated from the German by Christopher Sultan.