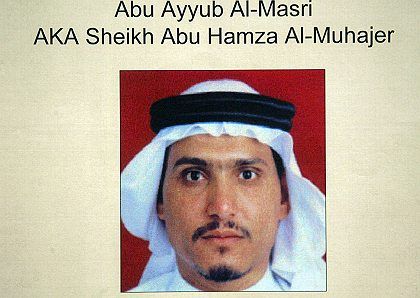 Abu Ayyub al-Masri may have been killed on Monday in Iraq.

Officials in Iraq on Tuesday have announced that Abu Ayyub al-Masri, the leader of al-Qaida in Iraq, has been killed. According to reports received by the government in Baghdad, al-Masri may have been killed in a battle between two insurgent groups, but the account could not be verified and the US has likewise said they could not confirm the death. Details about when and where al-Masri might have been killed are likewise sketchy.

Iraq government spokesman Ali al-Dabbagh said the report was based on "intelligence information." He added that "DNA tests should be done and we have to bring someone to identify the body. We will make an official announcement when we confirm that this person is Abu Ayyub al-Masri. The Iraqi government will work to identify him."

The initial confusion surrounding the reports of al-Masri's demise are fitting, given how little is known about the al-Qaida leader. When he took over from Abu Musab al-Zarqawi in June 2006, the US army said al-Masri had trained together with al-Zarqawi in Afghanistan and that he had close relations with Osama bin Laden's deputy Aiman al-Zawahiri. But hardly any information about al-Masri was ever confirmed; nobody really even knows where he might be from, although al-Masri means "the Egyptian."

In recent weeks, altercations between different insurgent groups have been on the rise. Bin Laden's troops in Iraq have shown a preference recently for going after Shiite groups and other Muslims rather than focusing their energies on American troops. The group's strategy, originally developed by al-Zarqawi, has been to transform Iraq into a civil war battlefield, thus providing a cover of chaos from behind which the Islamists could operate. In early April, the Islamic Army in Iraq accused al-Qaida of killing up to 40 of its fighters, though al-Qaida leaders have since tried to patch up the rift.

Tribesmen in Anbar Province in western Iraq say they have been fighting against al-Qaida militants for weeks and say they have killed dozens.

In Washington, meanwhile, a report by the US State Department released on Monday indicates that terrorist attacks spiked by 25 percent last year, a jump which was largely fueled by violence in Iraq. The annual review of global terrorism indicated that there were some 14,000 attacks in 2006 claiming more than 20,000 lives. Two-thirds of those who died lost their lives in Iraq. In 2005, there were 3,000 fewer attacks claiming 5,800 fewer lives.