The timing is deliberately symbolic. Ten years ago, after Western military forces drove the Taliban regime and al-Qaida forces out of Kabul, Germany hosted a conference of Afghan delegates aimed at choosing a transitional president at the Hotel Petersberg, the government-owned conference center on a hill overlooking Bonn that has been dubbed the "German Camp David."

The Americans nominated the Pashtun chieftain Hamid Karzai as their favorite. Cold and hungry as he hunkered down in a mountain hut outside Kandahar, Karzai, speaking on a satellite phone, agreed to assume the role.

Next Monday, Afghanistan's future will once again be on the agenda in Bonn, the former German capital. This time around, though, Karzai will be attending in person as the Afghan head of state and the conference's chairman. His delegation will be staying up in the Hotel Petersberg. Down on the Rhine River, around 100 delegates will gather in Bonn in the former seat of the Bundestag, Germany's parliament. There, plans call for them to agree on a document that commits the international community to providing the country with support for at least another decade after the last foreign combat troops have withdrawn in 2014. Such activities would include additional civil-reconstruction assistance, the training and financing of security forces with around roughly 350,000 soldiers and police officers, and investments aimed at improving the country's long-term economic prospects.

Everything sounds so pleasant and hopeful. In assuming responsibility for organizing this massive conference, German diplomats confronted an arduous but commendable task. In the process, Michael Steiner, a former ambassador who now serves as Germany's strong-willed but competent special representative for Afghanistan and Pakistan, has proven to be a talented impresario.

At the moment, almost the entire international community agrees upon two points. The first is that the war against the Taliban cannot be won militarily, and that all international forces would like to get out of Afghanistan as swiftly as possible. The West grossly underestimated the challenge it would face in the country. For the war-weary United States alone, the toll since late 2001 is almost 2,000 dead and 10,000 wounded soldiers, not to mention the cost of the war, currently $110 billion (€82 billion) per year.

Second, there also appears to be a consensus that Afghanistan needs to reach a degree of internal stability that will prevent it after 2014 from sinking into the kind of civil war and chaos that ensued when the occupying Soviet forces withdrew in February 1989. Not long thereafter, Moscow cut off the aid funds it supplied to President Najibullah, its puppet, for his security forces, triggering the collapse of his government. The resulting slaughter by the mujahadeen cost tens of thousands of lives in Kabul alone. "If Afghanistan goes downhill," says one leading conference attendee, "then the entire region could face an explosive situation, particularly if the crisis spills over into Pakistan, as an unstable nuclear power."

However, in Pakistan, a Muslim nation with a high potential for extremist behavior, turmoil could erupt at any moment. There, strong anti-Western sentiments have been approaching the boiling point, especially since the recent NATO helicopter attack that left 25 Pakistani soldiers dead.

To protest the attack, Pakistan's government has said it will no longer participate in the Bonn conference. The decision is far from welcome. In their planning simulations, diplomats view Pakistan as the most unpredictable regional player. Until now, Islamabad has been unwilling to make any decisive step toward fostering a process of reconciliation among Afghanistan's domestic players or renouncing its support of insurgents there. A significant part of the Taliban, including the militants of the Haqqani network and the Afghan warlord Gulbuddin Hekmatyar, continue to have strong ties with the Pakistani intelligence agency ISI.

No Peace without Pakistan

Still, if Pakistan refuses to cooperate, there can be no peace in neighboring Afghanistan. Pakistan is something of an unpredictable wild card, and it could frustrate all of the ambitious declarations of intent made at the conference in Bonn, including the hope of fostering internal dialogue within Afghanistan. Incidentally, progress there will only be made once all of the rival ethnic groups and relevant social forces -- including women -- feel that they are appropriately represented at the table.

Yet another element of uncertainty is the ethnic makeup of certain institutions in Afghanistan, such as the security forces. The police and the army are dominated by the Tajiks and Uzbeks, two ethnic minorities that sided with the Northern Alliance during the civil war. They continue to be viewed as the hated enemy by many Pashtuns, Afghanistan's largest ethnic group, who see themselves as the "true" Afghans and who make up the main pool from which the Taliban recruits its fighters.

However, in the eyes of the conference's participants, it is the Americans who bring the greatest amount of uncertainty into the great game in Afghanistan. No one knows what their long-term goals there really are. Indeed, what seems to be missing in Washington is decisive guidance from above. President Barack Obama and Secretary of State Hillary Clinton are clearly trying to bring a respectable end to America's entanglement in Afghanistan. The official line is that a few thousand US soldiers operating out of supply camps could fulfill the pledge to continue training Afghan security forces after 2014 as well as to keep fighting Islamist terrorists and the drug mafia in the region.

At the same time, however, there are also strategists from influential schools of thought and other players within the Department of Defense who believe that it will be necessary for the United States to maintain a long-term presence in the region, given developments in Iran, Pakistan and China as well as the factor of the natural resources of Central Asia. What's more, at least three major military bases would need to be kept in Afghanistan: one in Mazar-e-Sharif in northern Afghanistan; another in Bagram, near Kabul; and another in Kandahar in the south. From the latter, the United States could continue to launch its drone missions, which have been very successful at fighting militants in the region along the Afghanistan-Pakistan border. There are plans for all these activities to continue under the innocuous-sounding auspices of a "strategic partnership."

Making Afghanistan Master of Its Own Destiny

Karzai, who has withstood several assassination attempts, is a master of survival, and it is unclear whether he would sign off on such a deal. The insurgents refuse to enter into peace negotiations, let alone discuss the formation of a national unity government, as long as American soldiers are still stationed in the country.

Indeed, if the conference in Bonn intends to be anything more than a smokescreen event providing moral justification for the upcoming withdrawal from Afghanistan, the international community will have to abandon the sense of superiority it has so far displayed, as well as its pretensions to instill Western values in a society that continues to be based on a deeply rooted patriarchal tribal structure. Likewise, the necessary new insights should include the realization that those in power in Kabul cannot be prevented from making political arrangements with the insurgents. By continuing to demand that they be allowed to maintain bases in Afghanistan, the Americans could torpedo this process.

Indeed, one of the constants in Afghan politics has always been its constantly shifting alliances. In the end, the Afghans have to be allowed to determine their own fate. And this has to take place in the context of a system of government that reflects the cultural traditions of Afghans themselves -- not our own. 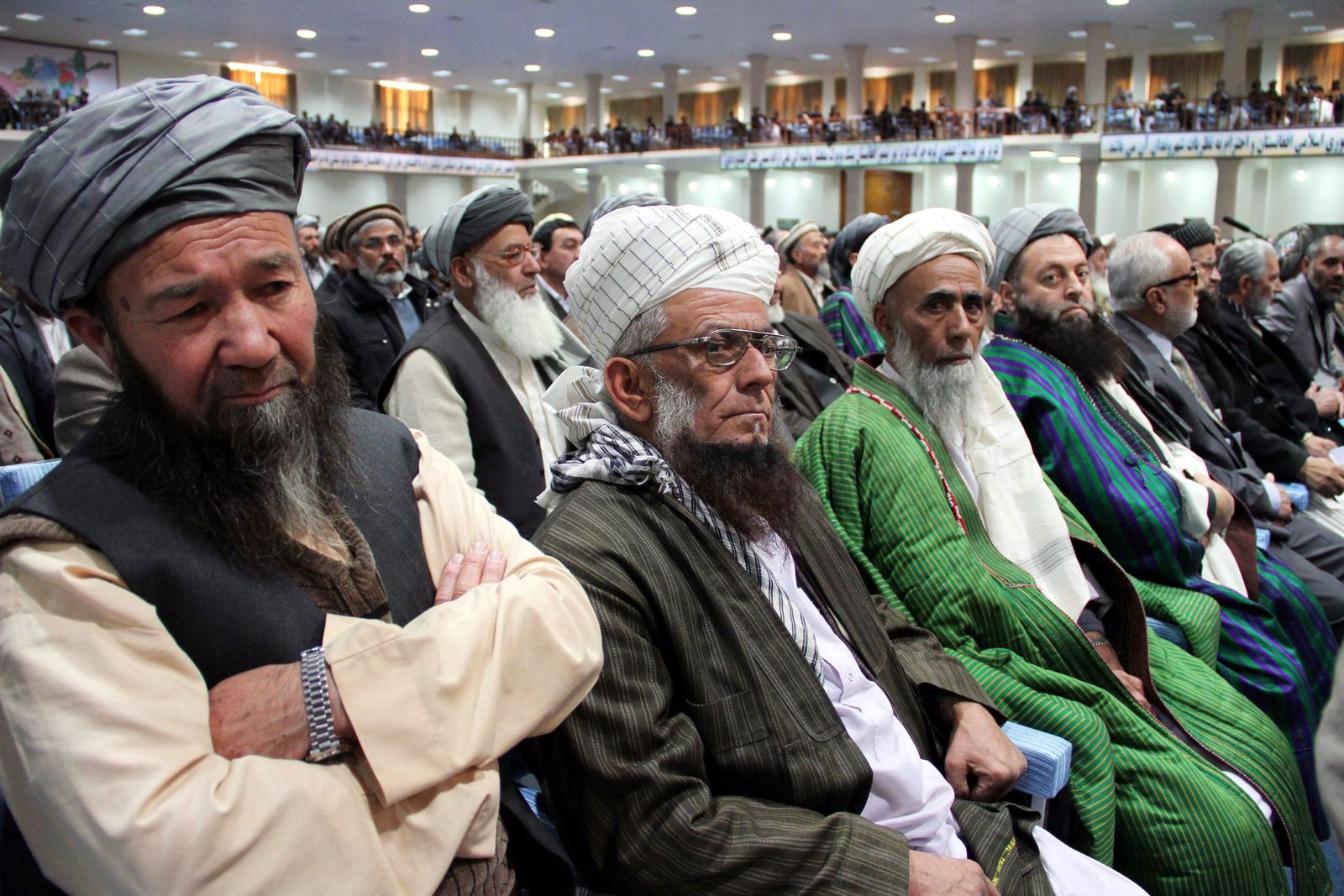 Afghan delegates listen to a speech by President Hamid Karzai in Afghanistan in November.