When Fatou Bensouda traveled to New York for the United Nations General Assembly in September, all appeared right with her world. And her press release in conclusion was routine, stating that she had successfully strengthened support for the International Criminal Court (ICC) by talking to heads of state, cabinet ministers and high-ranking diplomats "to highlight the work of my office in investigating and prosecuting the most serious crimes."

Just a few days later, she found herself surrounded by controversy. A series of articles in DER SPIEGEL and other European media partnered with European Investigative Collaborations (EIC) had shed light on some uncomfortable truths. Luis Moreno Ocampo, Bensouda's predecessor in The Hague, had owned offshore companies in Caribbean tax havens, allowed himself to be exploited by the West in the 2011 Libyan conflict and, at the end of his term with the ICC, signed up to some highly dubious advisory roles with clients that included a Libyan oil billionaire who used to be close to the Gadhafi regime. Finally, it was alleged that two members of Bensouda's staff had been secretly working with Ocampo, one of them supplying him with insider information from the ICC.

Fatou Bensouda did her best to distance herself from the Ocampo affair and initiated an investigation into the activities of the two staff members of her team. Her office also released a statement claiming that she had avoided contact with Ocampo since assuming office. "We would like to restate for the record the fact that the Office of the Prosecutor has not sought advice, communicated or collaborated with the former Prosecutor," the statement read. In subsequent days she reiterated her statement. Workers in the halls of the ICC referred to the scandal as "Ocampogate" and it didn't appear as though the current chief prosecutor was in any way implicated.

Her vehement disavowal, though, could now cause her problems. Internal documents leaked to French investigative platform Mediapart and examined by DER SPIEGEL paint a very different picture. They suggest that in fact Bensouda had a very close, trusting working relationship with her predecessor, writing to him on one occasion that he could contact her at "any time" and, on another, that she was "very grateful" for his help. During the ICC's investigation into crimes against humanity and war crimes in Colombia, she even sent confidential documents to Ocampo, who was active in the country as a consultant.

A comparison of Bensouda's official statements and her email exchanges with Ocampo lead to the inevitable conclusion that the ICC's chief prosecutor has repeatedly not told the truth.

'Can We Talk? I Am Worried about Kenya'

Originally from Gambia, Bensouda was promoted from Ocampo's deputy to his replacement as chief prosecutor in summer 2012 and took over a number of his investigations, including several that were highly fraught. In 2011, Ocampo had issued summons to Uhuru Kenyatta, now the President of Kenya, and other government officials in response to violence following alleged electoral manipulation in 2007.

Ocampo maintained his interest in many of these cases even after his term at the ICC had ended. And Bensouda was happy to brief him. In February 2013, a good six months after she had assumed office, he got in touch with her to ask: "Can we talk? I am worried about Kenya." But instead of citing her duty of confidentiality, Bensouda wrote back: "Thanks Luis. I tried again to call you today. I would like to discuss with you before taking a decision." Shortly thereafter, Bensouda announced that she would be dropping the case against one of Kenyatta's associates.

Ocampo also kept close tabs on the case against Colombia. As a consultant in the peace process, he supported the mediation between the government and FARC rebels. Bensouda was simultaneously continuing the investigation he had launched into war crimes perpetrated in the course of this longstanding conflict.

On July 23, 2013 Ocampo wrote to her saying "I need to understand your views on Colombia. I am going there in September." "Okay," she replied. "I will send you a summary." A few weeks later she forwarded Ocampo a letter from her private email address that she had previously sent to the president of the Colombian Constitutional Court.

In the letter, she outlined her legal position regarding the peace negotiations in Colombia. Bensouda's office has issued a statement defending the move, writing: "The letter was already in the public domain as it had evidently been leaked to the media in Colombia."

Bensouda May Have Been Influenced

The documents in DER SPIEGEL's possession indicate that the ICC's chief prosecutor sought the advice of her predecessor on several occasions and perhaps allowed herself to be influenced by him. Another example: In 2015, Ocampo began working with Yazidis from Iraq. Thousands of members of this religious minority had been persecuted by Islamic State, with many Yazidi women taken captive and raped, while their husbands were murdered. Ocampo declared his willingness to help the Yazidis bring a case before the ICC. In public, he stated that he was not in a position to approach the court directly because of his previous role as chief prosecutor and that his aim was merely to explain the legal procedure to them.

Nonetheless, he got in touch with his successor to arrange a meeting between Yazidi activists and Bensouda. "Hi Fatou. Can we talk? I would like to explain to you the Yazidi case and ask you what to do about it," he wrote on September 3, 2015. "Dear Luis, I hope you are well. Of course we can talk. Perhaps Saturday evening will be good for you. You can call me from 8.00 p.m. my time. Have a nice weekend and looking forward to speaking with you," she replied. Documents show that this conversation did in fact take place.

Ocampo followed up a few days later, telling Bensouda that the Yazidis' representatives were waiting for a response regarding the hoped-for meeting in The Hague. "Dear Luis, I just discussed the matter this evening," she replied. "I was having some scheduling issues but think I can make it for next week."

The meeting between the Yazidi representatives and Bensouda took place on September 24 to discuss a possible ICC investigation into atrocities committed by Islamic State. She had hoped to keep the meeting secret to avoid raising expectations. But Ocampo advised the Yazidis: "We should do the press conference. It is the most important thing." Reuters later reported on the meeting between the chief prosecutor and the Yazidis in The Hague. Emails show that Bensouda was annoyed.

In response to a request for comment from DER SPIEGEL, Bensouda sent a statement last Thursday saying that she has "explicitly asked the previous Prosecutor to refrain from any activities that might be perceived to interfere with the activities of the office, or bring its reputation into disrepute." It was a similar statement to the one issued when the allegations against Ocampo first emerged.

But her protestations that she has had no contact with her predecessor since assuming office have vanished. "Some contact might have occurred," she now concedes, though seeks to play it down. Any exchanges she may have had with Ocampo were "only sporadic and exceptionally rare." Really? The documents viewed by DER SPIEGEL contain dozens of emails she wrote to her predecessor.

Moreover, it was not until the Ocamapo affair came to light that Bensouda publicly distanced herself from him. When DER SPIEGEL visited the ICC chief prosecutor in The Hague several weeks ago, she had nothing bad to say about him. Asked about his dubious consultancy work with the Libyan oil billionaire Hassan Tatanaki, she described it as "a good thing." Her wall is decorated with photos of different ICC investigative teams. "You see, Luis is here, here also," she pointed out, smiling. It now seems that she too has been enveloped by the Ocampo affair. 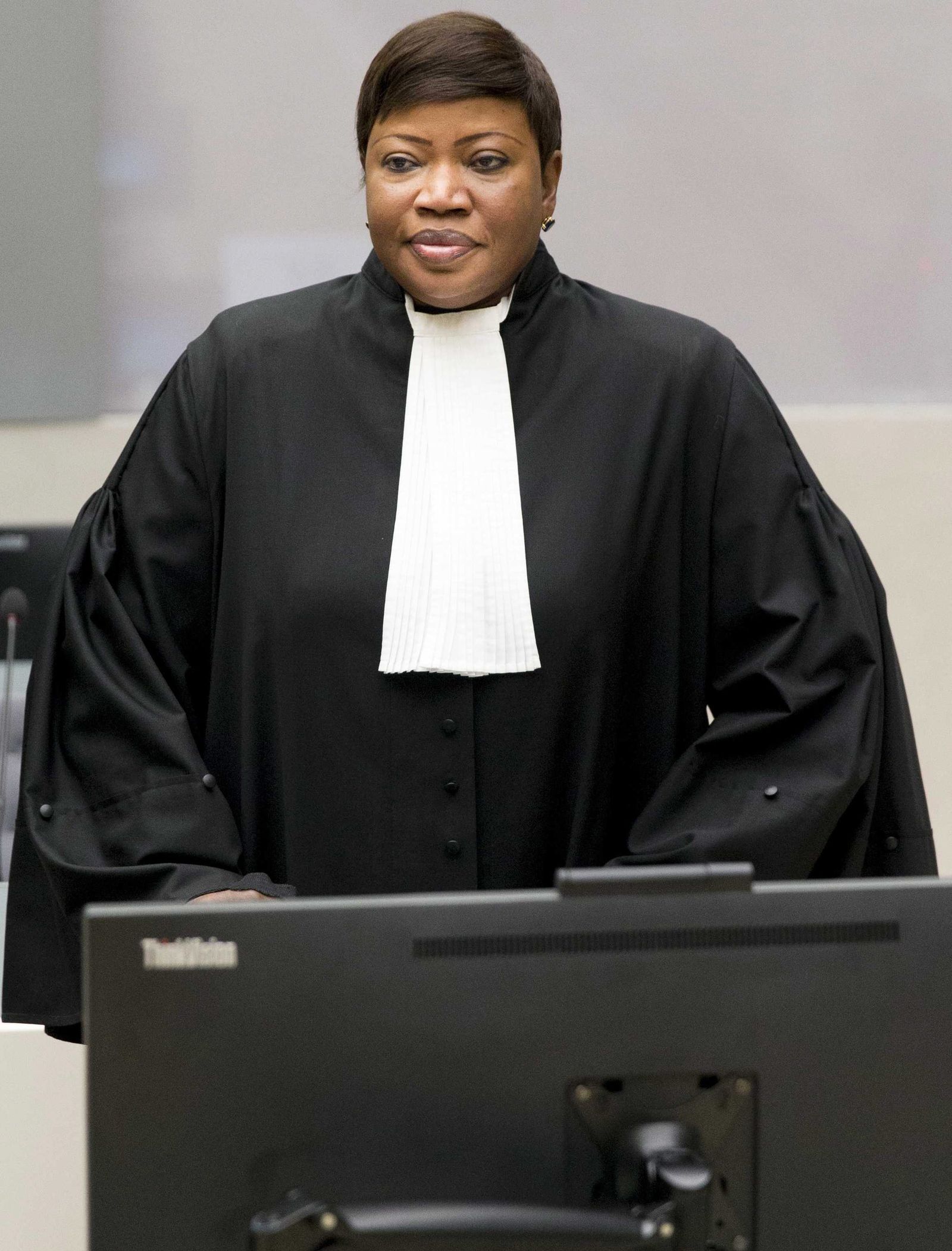