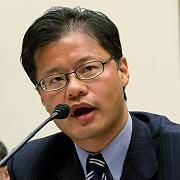 Yahoo CEO Jerry Yang: "It was clear we had to do this for them."

While no amounts were named, the gesture speaks volumes. On Tuesday, American Internet giant Yahoo agreed to settle a lawsuit brought against the company by jailed Chinese dissidents Shi Tao and Wang Xiaoning and to provide them with "financial, humanitarian and legal support."

In recent weeks, Yahoo -- which the suit accused of helping the Chinese government to jail and torture the two regime-critical journalists -- has been the subject of intense scrutiny by the United States Congress, where a penal lambasted the Silicon Valley company for collaborating with an oppressive regime. After a contentious hearing before the panel last week attended by family members of the convicted men, the company moved to settle.

"Having met with the families, it was clear that we had to do this for them, for Yahoo and for the future," said CEO Jerry Yang. The company also announced that it will set up a humanitarian fund for Chinese regime critics and their families.

The World Organization for Human Rights USA, which along with a family member filed a suit on behalf of the two dissidents in a California district court in April, reported that Shi Tao and Wang Xiaoning and their families are satisfied with the settlement and that they have dropped their case.

The journalists had used Yahoo as a platform to disseminate material critical of Beijing's communist regime, and the company disclosed information about their Internet activities to the Chinese authorities. In Wang's case, this amounted to e-mails with attached articles on democratic reforms. Shi Tao published a government document with details about a ban on media coverage of events marking the anniversary of the Tiananmen Square massacre.

In 2004, China sentenced the men to 10 years imprisonment following convictions on charges of disclosing state secrets and "incitement to overthrow the state." The men claim they were tortured in prison.

The human rights organization believes Yahoo was prompted to take action after being sharply criticized during a Nov. 6 congressional panel meeting. The panel accused the company of being "at best inexcusably negligent" and at worst "deceptive" with evidence it had given to the House Foreign Affairs Committee a year ago.

In a statement, Yahoo claimed to be shocked by the fact that the men landed in jail. Nonetheless, the company has consistently refused to accept any responsibility for arrests, maintaining its position that it had been obliged under Chinese law to forward e-mail correspondence to the government on request.

Last week's congressional hearings took a close look at the case of Shi Tao. At the time of his arrest, Yahoo admitted to having forwarded information to the Chinese government but refused to acknowledge a connection to the arrests. Two years later, in February 2006, Michael Callahan, Yahoo's executive vice-president and general counsel, told a congressional hearing that he had had no idea why the Chinese authorities were interested in Shi Tao.

Last week, Callahan admitted to the congressional committee that Yahoo employees had indeed been informed about the nature of the government's interest but that this only came to his attention after he testified before Congress.

The Yahoo case has cast a spotlight on the perils of multinational Internet companies doing business in countries that do not respect the right to free speech. And in the minds of many critics, including House Foreign Affairs Committee Chairman Tom Lantos, a California Democrat, companies should "resist any attempts by authoritarian regimes to make them complicit in cracking down on free speech, otherwise they simply should not do business in those markets."

Lantos also criticized Yahoo for taking too long to resolve the controversy over its Chinese businesss dealings. "It took a tongue-lashing from Congress before these high-tech titans did the right thing and coughed up some concrete assistance for the family of a journalist whom Yahoo had helped send to jail," Lantos said. "What a disgrace."