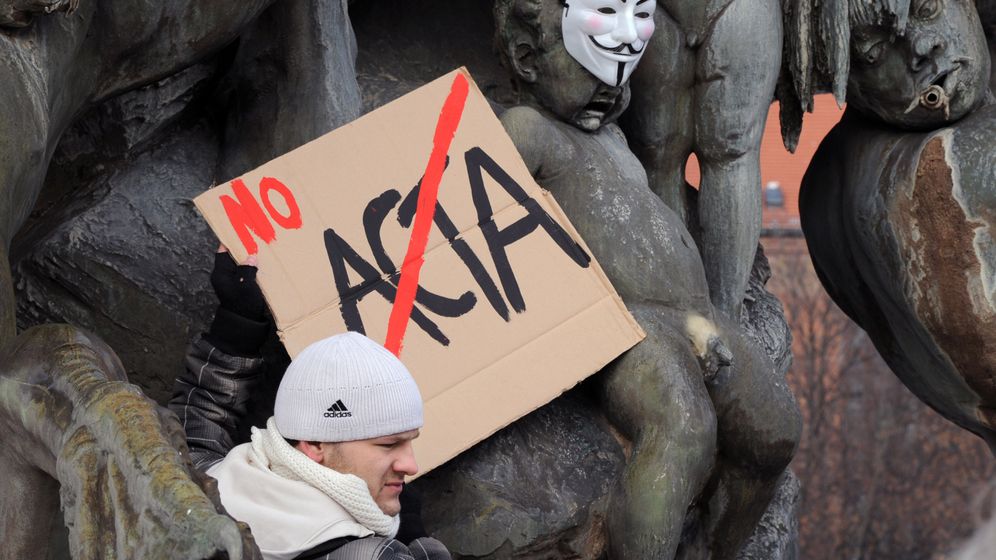 Many of them were wearing sinister-looking plastic masks, the trademark of the "Anonymous" hacker movement. About 100,000 people, most of them young, demonstrated for a free Internet on Saturday, Feb. 11, in more than 50 German cities. They carried signs with slogans like "Stop ACTA, the Internet GDR," a reference to communist East Germany, or "Put ACTA ad acta," a play on a Latin phrase used in German which means to file something away for good.

Their fury was directed against the Anti-Counterfeiting Trade Agreement. Under the agreement, all European Union countries and 10 other countries will agree to fight copyright violations more effectively. The music and film industry, in particular, hopes that ACTA will provide them with more power to take action against Internet piracy, which costs them billions in lost sales each year.

However, it is still unclear how exactly the fight against intellectual property theft is to be conducted. ACTA remains oddly vague, merely "encouraging cooperation between service providers and right holders." It is left up to each signatory nation to decide for itself how to implement the provisions of the agreement. It is this lack of clarity that awakens the suspicions of the Internet community. There is even the feeling that the agreement was devised in secret negotiations, and with the substantial involvement of lobbyists for the film and music industry.

So far, France and Great Britain have taken the most radical steps in combating data piracy. In France, more than 600,000 users have already been warned against illegal downloads, with a "three strikes" model providing for the denial of Internet access for a year to repeat offenders. For many Internet users, this feels as excessive as turning off the heating in someone's home if they are caught riding the subway in winter without a ticket.

In Germany, copyright holders have urged for years that providers like Deutsche Telekom be held responsible for the information users exchange through their services. For this reason, critics fear that ACTA could turn providers into the sheriffs of the music and film industry. It is conceivable, for example, that providers could be required to install monitoring filters that would scan video streams for illegal content -- not unlike the filters used for political censorship in China.

But it's completely unclear whether the situation could actually become that serious, leaving politicians and journalists all the more surprised by the vehemence of the protests that erupted so abruptly. Even the protesters themselves are stunned. For years, it was thought that getting people interested in the issue of ACTA would be impossible, says Markus Beckedahl, a net activist from Berlin who co-founded an organization called Digitale Gesellschaft (Digital Society) about a year ago. "The combination of European Union policy, copyright and technology sounds incredibly dull. In theory, it ought to be fatal for any campaign."

But that wasn't the case at all, and now the German government seems helpless in the face of a storm of protests. Because of the controversy, the cabinet has postponed the ratification of ACTA. The coalition government in Berlin is disoriented. The public resistance prompted Justice Minister Sabine Leutheusser-Schnarrenberger, a member of the pro-business Free Democratic Party (FDP), who had initially supported ACTA within the cabinet, to reverse her position -- to the great surprise of Chancellor Angela Merkel and the other ministers.

Consumer Protection Minister Ilse Aigner, a member of Bavaria's conservative Christian Social Union (CSU), was similarly divided. "The course of events shows that it is never too early to use transparency and civic participation to avert public mistrust," says Aigner. "The European Commission should have conducted the ACTA process more transparently and it should also have placed the key documents on the Internet earlier." As it happens, it was actually a senior official in her own ministry, Robert Kloos, who had formally given the nod to the agreement on behalf of Germany in Brussels in mid-December.

In particular, younger parliamentarians in the coalition parties -- the center-right Christian Democratic Union (CDU), its sister party the CSU and the FDP -- are now determined to bring down ACTA. CSU politician Dorothee Bär says: "ACTA is an attack on freedom on the web."

These are strong words for a relatively banal agreement. As it is, the resistance against ACTA already has hysterical overtones. The protests were fueled by the activist group Anonymous, when it struck fear in the hearts of Internet users with a propaganda video viewed by millions. The clip suggests, among other things, that a person who takes a paid cooking class and then divulges a delicious chicken recipe to his girlfriend could be thrown in prison. "The Internet as we know it is on the brink of destruction," warns the video.

This is greatly exaggerated, of course. On the other hand, it is not unreasonable to suspect that ACTA is intended to pave the way for closer monitoring of Internet users, as evidenced by the French model. The only question is whether this would even be technologically feasible. Methods to circumvent the censors' filter programs, like fully encrypted data tunnels, have been around for some time. Consequently, the most important outcome of ACTA is that it could lead to a senseless technological arms race.

Even critics of ACTA are opposed to dubious services like the German filesharing site kino.to or megaupload.com, which have allegedly profited from the illegal copying of movies and music. But the operators of both sites were arrested some time ago. It wasn't necessary to have ACTA for that.

Many valid objections of members of the European Parliament and computer experts were ignored during the years of consultations over ACTA. A legal opinion concluded that the agreement is burdened with 16 legal defects. Many law professors, including Reto Hilty, the managing director of the Max Planck Institute for Intellectual Property and Competition Law in Munich, signed the opinion. They are opposed to its overall direction.

"ACTA focuses one-sidedly on sanction possibilities without sufficiently mentioning the legal protection guarantees for citizens," says Axel Metzger, a law professor from the northern German city of Hanover. "ACTA takes the wrong approach," he argues, "because it does not adequately balance two important legally protected interests against one another: the protection of intellectual property, on the one hand, and the private sphere and civil rights, on the other."

Instead, Metzger and many of his fellow legal experts advocate the pragmatic updating of existing copyright law, as was already practiced in the past -- when, for example, photocopiers or CD burners were first introduced. When publishers and the music industry complained about the new technologies eating into their margins, copyright associations and lump-sum copying fees were introduced. This made sense, because of the impossibility of monitoring the individual act of copying something.

So what should modern copyright law look like? There is a widespread consensus that the creative achievements of filmmakers, musicians, writers and inventors are worthy of protection. The only question is whether this truly necessitates pressuring the providers to monitor the communication of their customers. Wouldn't a lump-sum remuneration, which could be charged to every Internet connection, be an easier solution?

It also hasn't been determined yet which political party will gain the support of the new protest culture. Will the Pirate Party, which campaigns for Internet freedoms, be the only beneficiary of the movement? The Greens, in particular, are under pressure in light of the new European citizens' movement on the Internet. The fight against ACTA could help the protesters forge a political identity for themselves, just as the fight against permanent storage sites for nuclear waste did for the environmental movement in Germany.

But even the Greens are divided over whether the period of protection for artistic works should be shortened. Agnes Krumwiede, a Green Party politician and pianist, is vehemently opposed to the idea. "We are the party of the writer Heinrich Böll and the artist Joseph Beuys," referring to two prominent German intellectuals who supported the party in its early days.

Even activists are at odds over how much of a threat to Internet freedom ACTA actually poses. Net activist Beckedahl, for example, finds the popularity of the Anonymous propaganda video surprising. "It would be better if we took a close look and made our own, precise proposals on how to reform copyright law." He is sure about one thing, however. "Anyone who ignores this protest movement," says Beckedahl, "will be swept away by public opinion in the next elections."

The European Parliament begins debating ACTA at the end of the month, and it could vote on the agreement by the end of the summer. But support for it is crumbling among individual countries. Slovakia, Poland and the Czech Republic have already suspended ratification of the agreement. It is quite possible that ACTA will fail.

Ironically, it is an American media conglomerate that is benefiting from the anti-ACTA protests. The Anonymous masks so popular among the protesters are from the film "V for Vendetta." Time Warner makes money on every mask sold.