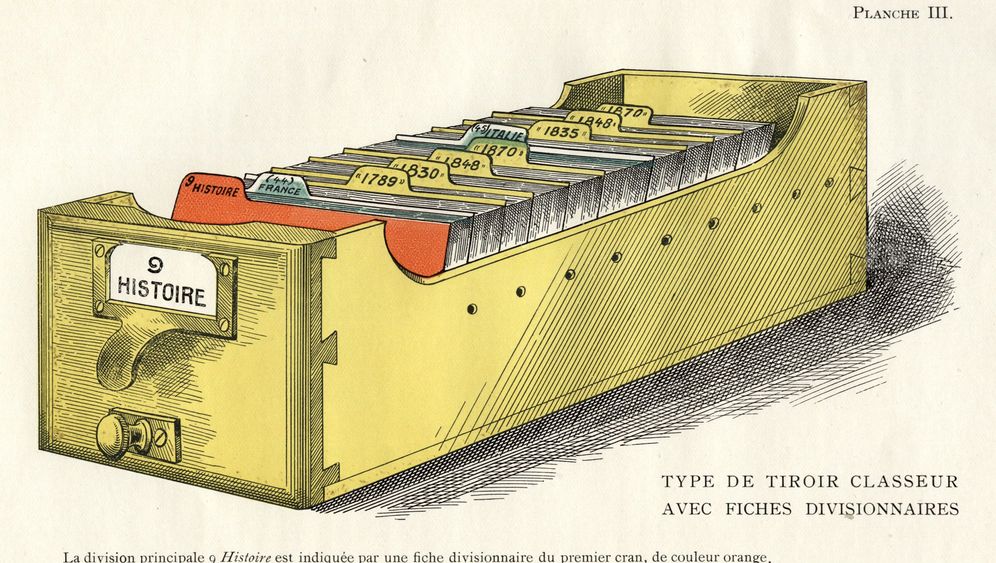 The world's first search engine is made of wood and paper. Specifically, it consists of rows of dark brown cabinets about as tall as a person, filled with boxes of index cards. "Sixteen million index cards," notes Jacques Gillen, laying one hand on a cabinet handle.

Gillen is an archivist at the Mundaneum, the institution that operated this gigantic catalogue in the 1920s. Inquiries came into Brussels by letter or telegram, as many as 1,500 of them a year, and the answers were then found by hand, a process that sometimes took weeks. The project was something like a paper Google, but developed decades before the Internet and without the benefit of computers.

Belgian librarian Paul Otlet created the Mundaneum. A trained lawyer from a wealthy family, Otlet wanted to map out the world's knowledge and preserve it in his wooden cabinets. He envisioned collecting all of the books ever published and interlinking them using an archival system he developed himself.

Gillen, the archivist, fishes an index card out of a box. From the jumble of numbers written on the card, he can decipher dozens of pieces of information about the book to which the card refers. Many modern researchers agree that with this archival system, developed around the turn of the last century, Otlet essentially invented hypertext, the network of links that help us navigate around the Internet today. "You could call Otlet one of the original minds behind the Internet," Gillen says, placing the card back in its box.

Otlet first developed the idea of a global knowledge "network" in 1934. At a time when radio and television were still in their infancy, he tried to develop multimedia concepts to improve opportunities for cooperation among researchers. Otlet wrestled with the question of how to make knowledge accessible across great distances. He used a combination of index cards, telephones and other equipment to approximate what is possible today with any computer.

Similarly, without the aid of electronic data processing, Otlet developed ideas whose application we know today under names such as Web 2.0 and Wikipedia. Yet Otlet's name and his work are largely forgotten. Americans Vannevar Bush, Ted Nelson and Douglas Engelbart are considered the minds behind hypertext and the Internet, while the remains of the Mundaneum collection spent decades rotting in dilapidated attics.

The Mundaneum began in the early 20th century as a dazzling success story. Otlet and his colleague Henri La Fontaine, who later won a Nobel Peace Prize, had been working on the project since 1895. The Mundaneum, which opened its doors in 1920 in a grand building in the heart of Brussels, was a mixture of public museum and meeting place for scholars, with an enormous catalogue of information, as well as an archive.

The archive contained not only books, but also countless newspapers, posters and more than 200,000 postcards, as well as samples of everything from airplanes to telephones. There was so much material that it soon threatened to overwhelm the project. But Otlet and his colleagues were on a mission, convinced that the global dispersal of knowledge could promote peace. To these ends, they worked in close collaboration with other research institutions abroad.

A Paperless Way of Spreading Information

Alongside his passion for collecting, Otlet worked on new ideas for the paperless dissemination of knowledge. He saw books as nothing more than "containers for ideas," ones which could be replaced by more practical media, for example graphics and diagrams, of which he himself produced countless examples. These saved space because they could be recorded on microfilm, and had the added benefit of being internationally comprehensible. Otlet also hoped to use audio and film to make it possible to transport information faster, further and more easily.

Otlet collected all of these ideas in his 400-page book "Traité de documentation." He laid out the concept of an academic conference that could be broadcast by telephone, and wondered, "Why not send images, too? It could be called 'radio telephotography!'" Otlet also saw gramophones as a way to archive and reproduce spoken information.

"We recently found a text written in 1907, in which he talks about mobile telephones," Gillen says, as he gingerly packs away Otlet's fragile original outlines.

Radio, at the time a new medium, was especially fascinating for Otlet because of its ability to transmit information wirelessly across long distances and to reach an unlimited number of receivers. For him, it was one step toward fulfilling the dream he formulated in 1934 for a "universal network that would allow the unrestricted dissemination of knowledge."

Anyone sitting at home "in an armchair," Otlet suggested, would be able to access the current state of global knowledge. Developments anywhere in the world could be recorded as soon as they happened, "in this way becoming a flexible image of the world, its mind, its true duplicate." Otlet described this as a "mechanical, collective brain."

A Loss of Funding and the Nazi Invasion

Despite these visionary ideas, Otlet's Mundaneum suffered a harsh setback in 1934 when it was forced to close after its financial backers in the Belgian government lost interest in the project. When the Nazis marched into Brussels in 1940, they removed the collection from the "Palais Mondial" in the city's center and exhibited Nazi artwork there instead.

Otlet's vision of peace through knowledge had failed and he died in 1944, impoverished and bitter. It wasn't until 1968 that American researcher W. Boyd Rayward discovered parts of the collection. Rayward researched further, eventually managing to reopen the Mundaneum in 1998, on a somewhat smaller scale and located in the provincial town of Mons, about 30 kilometers (19 miles) outside of Brussels. Here, archivist Gillen and his colleagues are still sorting through masses of documents that amount to six kilometers (four miles) of archival material.

More than 60 years after his death, many of Otlet's ideas have become reality, and researchers and Internet experts are taking an interest in his thoughts on the "mechanical brain." Otlet's conception of a dynamic body of global knowledge, one which requires constant additions and is shaped collectively, bears clear similarities to the concept behind the online encyclopedia Wikipedia. Similarly, Otlet had thoughts on how to incorporate into his networked catalogue of knowledge different annotations that would correct mistakes or reveal contradictions.

Charles van den Heuvel at the Royal Netherlands Academy of Arts and Sciences, though, warns against warns against such comparisons. According to van den Heuvel's interpretation, Otlet was proposing a system in which knowledge would be laid out hierarchically; only a small group of scholars would organize the information, and changes and annotations would not be blended into existing information, as Wikipedia does, but would complement them.

Otlet's proposed network far surpassed the World Wide Web with its hypertext structure. Otlet didn't just want to connect various pieces of data with one another, he also wanted the links themselves to carry meaning. Many experts agree that Otlet's idea demonstrates many parallels to the concept of a "semantic network," which aims to make it possible for computers to utilize the actual meaning of data, allowing them to interpret information and process it automatically.

Projects attempting to create a semantic network could benefit from a look at Otlet's ideas and at his thoughts on hierarchy and centralization in this context, van den Heuvel suggests.

The staff at the Mundaneum in Mons is currently digitalizing Otlet's work, in order to make it available online. This process may take quite a long time, Gillen warns, but when it's done Otlet's vision will finally come true -- his collection of knowledge will be available to the world, paperless and open to all.