SPIEGEL ONLINE: Your Highness, many groups from in and outside Bahrain called for the Formula 1 race that was held last weekend to be cancelled. Can you justify the fact that it took place?

Khalifa: I was very happy that it took place, despite all the negative comments we saw before the Formula 1 race. I was there and saw the whole race. It was a happy event for all Bahrainis.

SPIEGEL ONLINE: In the meantime, the protests in your country are continuing. The opposition claims the government's reforms do not go far enough and that you aren't really interested in a dialogue.

Khalifa: First of all, this is a movement of people which, in the modern world, we call a "terrorist group." This movement is supported by Iran and Hezbollah. What we are facing is exactly what the Americans are facing with terrorism.

SPIEGEL ONLINE: Are you comparing serious Bahraini opposition groups like Al Wefaq with a terrorist network?

Khalifa: I am specifically talking about all those who are calling for violence and destruction. About those who are burning tires, throwing Molotov cocktails at police and are terrorizing the rest of this country.

SPIEGEL ONLINE: So you reject a dialogue?

Khalifa: We are open to dialogue. Our door remains open, but those who say they want dialogue have to remember that the participation of all sectors of Bahraini society is needed in order for these efforts to bear fruit. But let's not forget, we have offered the opposition a dialogue in the past and they walked out of it. The king has gone a long way in making many offers to them, but in the end they told us they had to wait to see what Iran would tell them. Now we are experiencing daily violence on our streets. If I were to ask the Americans to engage in a dialogue with terrorist organisations, such as al-Qaida, what do you think they would say?

Khalifa: Reforms? If only this truly were about reforms. We started reforms a long time ago -- earlier than any other Arab country. The king also made clear he wanted to continue with further reforms. We also have a very sophisticated welfare state in Bahrain that offers its citizens free education and health care, subsidizes housing and living allowances -- and even includes unemployment benefits. I hold the opposition's religious leader, Issa Qassim, responsible for everything that is going on in this country, especially for all the people who have been killed. And Qassim is taking his orders from Iran.

SPIEGEL ONLINE: People are protesting every day in the suburbs of the capital city of Manama. These demonstrations often end in altercations between the police and protesters. How would you like to resolve the situation in your country?

Khalifa: We have to apply the law against everyone who broke it. These people are destroying public property and they are attacking police and Asian expatriate workers. It is our duty to protect all people in Bahrain. We are a multicultural society and we do not want that to change.

SPIEGEL ONLINE: Does this mean you will use more police force against the protestors?

Khalifa: We do not want bloodshed in this country. Our police are only here to protect the people and not to attack or kill them. So far, we have shown a great deal of patience with the opposition. We made mistakes on our side, but the king brought in the Bassiouni Commission (an independent panel led by Egyptian-American human rights expert Cherif Bassiouni to carry out an inquiry into the protests and resulting violence), which was very critical of our past actions. We have accepted (the report) and have now implemented some of (the commission's) recommendations. We are currently processing other proposed reforms through the parliamentary process and constitutional court. But has the international community ever questioned the opposition or held them accountable for their actions?

SPIEGEL ONLINE: Abdulhadi al-Khawaja, the most prominent member of the opposition, who is currently in jail in your country, has been on a hunger strike for almost 80 days. His condition is very bad.

Khalifa: I beg to differ with you. His condition is not as bad as you say. According to the doctors attending to him on a daily basis, he takes liquids. The Danish ambassador visited him recently and said he was satisfied with the treatment being provided to him.

SPIEGEL ONLINE: Why don't you release al-Khawaja or extradite him to Denmark, where he lived in exile for a number of years and also has dual citizenship?

Khalifa: In Bahrain, the executive branch does not interfere in the judicial process. He has been accorded due process of law. He is a Bahraini citizen, and extraditing him to Denmark is against Bahraini law.

SPIEGEL ONLINE: But a number of international human rights groups and Western countries claim that your security forces are continuing to abuse protesters and opponents of the government.

Khalifa: I do not think these accusations are legitimate. How do Western police deal with unlawful and violent protests? Are they just letting protesters there throw stones and Molotov cocktails? When it comes to national security, human rights aren't the most important thing. Or did the Americans and their allies think about human rights when they marched into Iraq and Afghanistan?

SPIEGEL ONLINE: The opposition in your country are just asking for more rights, particularly those within the Shiite majority of Bahrain's population.

Khalifa: The opposition is only looking for excuses, abusing demands for "more rights" and "democracy" to turn Bahrain into a second Iran. We have Sunni and Shiite ministers; and we have Shiites who are very rich. It simply isn't true that the Shiites in Bahrain are poor and oppressed. They left parliament, they blocked our roads and they put this nation in jeopardy. They hung effigies of myself, the king and the crown prince with nooses around our necks and signs saying, "Death to Al Khalifa." This is democracy.

SPIEGEL ONLINE: The opposition groups are demanding that you resign from your post as prime minister and say it could be the first step toward stopping the protests. When will you listen to their calls and step down?

Khalifa: This is for the king to decide. My duty was and remains to protect this country, and I will do this until the last day of my life. Believe me, if my position alone were the reason for the unrest, then I would have already stepped down from my office last year. But this is just a further excuse from the opposition. I am very proud of Bahrain's achievements and the role I have played in realizing them. We have also established Bahrain as a multiethnic and multicultural country, and the majority of our people are against the efforts of those who seek to sow the seeds of division.

SPIEGEL ONLINE: But the fact is that you have governed since 1971, making you the longest-serving prime minister in the world. That's very unsual for a democracy.

Khalifa: So what? Democratic systems are very different. The system in Thailand is different from Russia, and the form practiced in Germany differs from that of the United States. So why can't we also be different?

SPIEGEL ONLINE: Some countries in the Arab world have already changed: Tunisia, Libya and Egypt, for example.

Khalifa: Do you think I am happy to see what has happened in all these countries? This is not an "Arab spring." Spring is connected with flowers, happy people and love -- not death, chaos and destruction. And how did Britain react when the country experienced its own "Arab spring" last year when young people started to steal and attack?

SPIEGEL ONLINE: You mean the riots in London and other cities? But the British weren't asking for more rights.

Khalifa: Just because people in Bahrain claim to be acting in the name of democracy does not make their actions any less bad than what happened in Britain last year.

Khalifa: Saudi Arabia has never put pressure on us. We are members of the Cooperation Council for the Arab States of the Gulf and it was our right to ask our allies for help. When the Americans went into Iraq and Afghanistan, they also asked their allies for help and no one said a word about it. But we got criticized when we did. 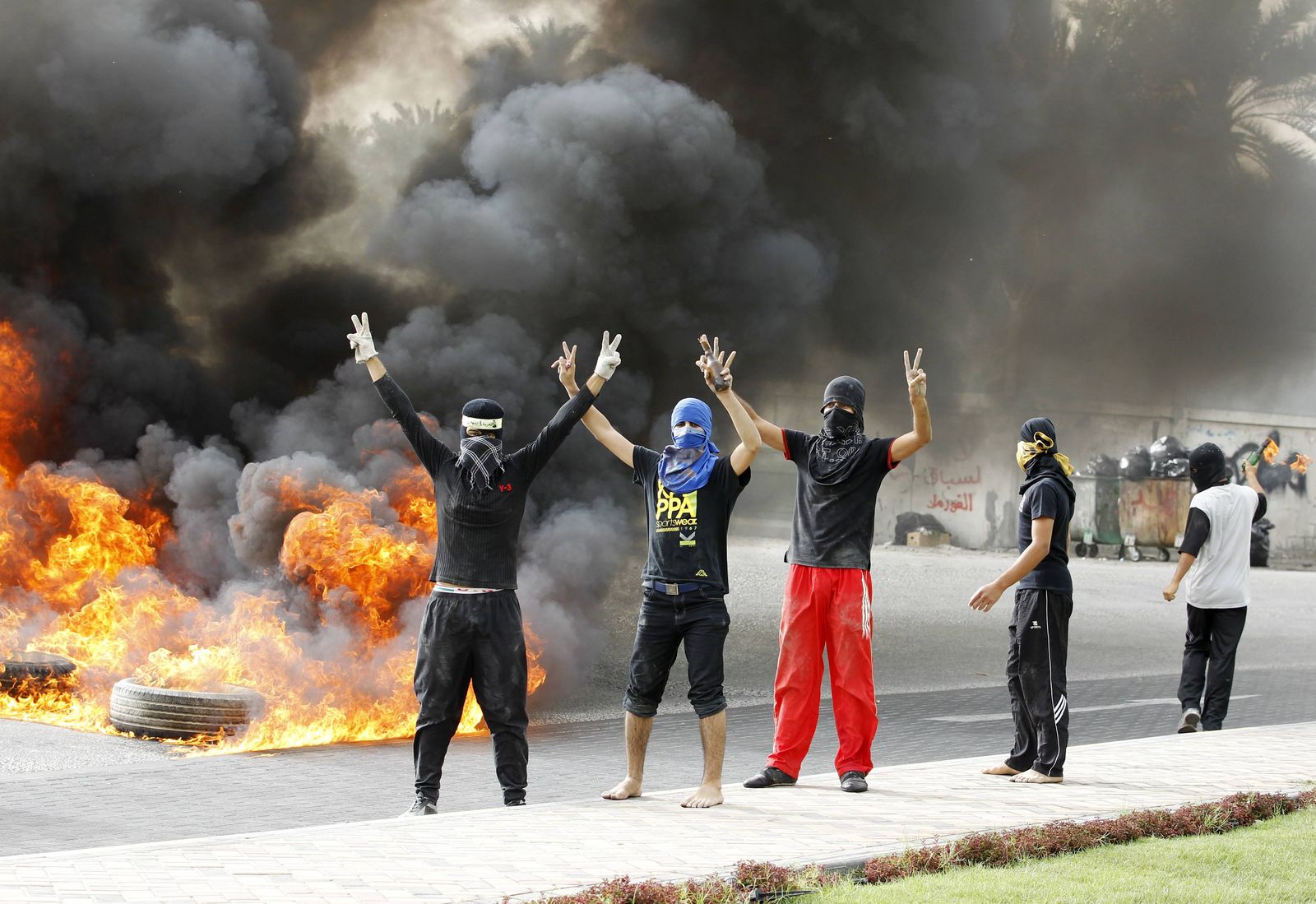 Unrest in Bahrain: "We are facing is exactly what the Americans are facing with terrorism."