Storch: I'm not aware of any studies showing that floods happen more often today than in the past. I also just attended a hydrologists' conference in Koblenz, and none of the scientists there described such a finding.

SPIEGEL: But don't climate simulations for Germany's latitudes predict that, as temperatures rise, there will be less, not more, rain in the summers?

Storch: That only appears to be contradictory. We actually do expect there to be less total precipitation during the summer months. But there may be more extreme weather events, in which a great deal of rain falls from the sky within a short span of time. But since there has been only moderate global warming so far, climate change shouldn't be playing a major role in any case yet.

SPIEGEL: Would you say that people no longer reflexively attribute every severe weather event to global warming as much as they once did?

Storch: Yes, my impression is that there is less hysteria over the climate. There are certainly still people who almost ritualistically cry, "Stop thief! Climate change is at fault!" over any natural disaster. But people are now talking much more about the likely causes of flooding, such as land being paved over or the disappearance of natural flood zones -- and that's a good thing.

SPIEGEL: Will the greenhouse effect be an issue in the upcoming German parliamentary elections? Singer Marius Müller-Westernhagen is leading a celebrity initiative calling for the addition of climate protection as a national policy objective in the German constitution.

Storch: It's a strange idea. What state of the Earth's atmosphere do we want to protect, and in what way? And what might happen as a result? Are we going to declare war on China if the country emits too much CO2 into the air and thereby violates our constitution?

SPIEGEL: Yet it was climate researchers, with their apocalyptic warnings, who gave people these ideas in the first place.

Storch: Unfortunately, some scientists behave like preachers, delivering sermons to people. What this approach ignores is the fact that there are many threats in our world that must be weighed against one another. If I'm driving my car and find myself speeding toward an obstacle, I can't simple yank the wheel to the side without first checking to see if I'll instead be driving straight into a crowd of people. Climate researchers cannot and should not take this process of weighing different factors out of the hands of politics and society.

SPIEGEL: Hans Joachim Schellnhuber, director of the Potsdam Institute for Climate Impact Research, outside Berlin, is currently Chancellor Angela Merkel's climate adviser. Why does she need one?

Storch: I've never been chancellor myself. But I do think it would be unwise of Merkel to listen to just a single scientist. Climate research is made up of far too many different voices for that. Personally, though, I don't believe the chancellor has delved deeply into the subject. If she had, she would know that there are other perspectives besides those held by her environmental policy administrators.

SPIEGEL: Just since the turn of the millennium, humanity has emitted another 400 billion metric tons of CO2 into the atmosphere, yet temperatures haven't risen in nearly 15 years. What can explain this?

Storch: So far, no one has been able to provide a compelling answer to why climate change seems to be taking a break. We're facing a puzzle. Recent CO2 emissions have actually risen even more steeply than we feared. As a result, according to most climate models, we should have seen temperatures rise by around 0.25 degrees Celsius (0.45 degrees Fahrenheit) over the past 10 years. That hasn't happened. In fact, the increase over the last 15 years was just 0.06 degrees Celsius (0.11 degrees Fahrenheit) -- a value very close to zero. This is a serious scientific problem that the Intergovernmental Panel on Climate Change (IPCC) will have to confront when it presents its next Assessment Report late next year.

SPIEGEL: Do the computer models with which physicists simulate the future climate ever show the sort of long standstill in temperature change that we're observing right now?

Storch: Yes, but only extremely rarely. At my institute, we analyzed how often such a 15-year stagnation in global warming occurred in the simulations. The answer was: in under 2 percent of all the times we ran the simulation. In other words, over 98 percent of forecasts show CO2 emissions as high as we have had in recent years leading to more of a temperature increase.

SPIEGEL: How long will it still be possible to reconcile such a pause in global warming with established climate forecasts?

Storch: If things continue as they have been, in five years, at the latest, we will need to acknowledge that something is fundamentally wrong with our climate models. A 20-year pause in global warming does not occur in a single modeled scenario. But even today, we are finding it very difficult to reconcile actual temperature trends with our expectations.

SPIEGEL: What could be wrong with the models?

Storch: There are two conceivable explanations -- and neither is very pleasant for us. The first possibility is that less global warming is occurring than expected because greenhouse gases, especially CO2, have less of an effect than we have assumed. This wouldn't mean that there is no man-made greenhouse effect, but simply that our effect on climate events is not as great as we have believed. The other possibility is that, in our simulations, we have underestimated how much the climate fluctuates owing to natural causes.

SPIEGEL: That sounds quite embarrassing for your profession, if you have to go back and adjust your models to fit with reality…

Storch: Why? That's how the process of scientific discovery works. There is no last word in research, and that includes climate research. It's never the truth that we offer, but only our best possible approximation of reality. But that often gets forgotten in the way the public perceives and describes our work.

SPIEGEL: But it has been climate researchers themselves who have feigned a degree of certainty even though it doesn't actually exist. For example, the IPCC announced with 95 percent certainty that humans contribute to climate change.

Storch: And there are good reasons for that statement. We could no longer explain the considerable rise in global temperatures observed between the early 1970s and the late 1990s with natural causes. My team at the Max Planck Institute for Meteorology, in Hamburg, was able to provide evidence in 1995 of humans' influence on climate events. Of course, that evidence presupposed that we had correctly assessed the amount of natural climate fluctuation. Now that we have a new development, we may need to make adjustments.

SPIEGEL: In which areas do you need to improve the models?

Storch: Among other things, there is evidence that the oceans have absorbed more heat than we initially calculated. Temperatures at depths greater than 700 meters (2,300 feet) appear to have increased more than ever before. The only unfortunate thing is that our simulations failed to predict this effect.

Storch: Certainly the greatest mistake of climate researchers has been giving the impression that they are declaring the definitive truth. The end result is foolishness along the lines of the climate protection brochures recently published by Germany's Federal Environmental Agency under the title "Sie erwärmt sich doch" ("The Earth is getting warmer"). Pamphlets like that aren't going to convince any skeptics. It's not a bad thing to make mistakes and have to correct them. The only thing that was bad was acting beforehand as if we were infallible. By doing so, we have gambled away the most important asset we have as scientists: the public's trust. We went through something similar with deforestation, too -- and then we didn't hear much about the topic for a long time.

SPIEGEL: Does this throw the entire theory of global warming into doubt?

Storch: I don't believe so. We still have compelling evidence of a man-made greenhouse effect. There is very little doubt about it. But if global warming continues to stagnate, doubts will obviously grow stronger.

SPIEGEL: Do scientists still predict that sea levels will rise?

Storch: In principle, yes. Unfortunately, though, our simulations aren't yet capable of showing whether and how fast ice sheets in Greenland and Antarctica will melt -- and that is a very significant factor in how much sea levels will actually rise. For this reason, the IPCC's predictions have been conservative. And, considering the uncertainties, I think this is correct.

SPIEGEL: And how good are the long-term forecasts concerning temperature and precipitation?

Storch: Those are also still difficult. For example, according to the models, the Mediterranean region will grow drier all year round. At the moment, however, there is actually more rain there in the fall months than there used to be. We will need to observe further developments closely in the coming years. Temperature increases are also very much dependent on clouds, which can both amplify and mitigate the greenhouse effect. For as long as I've been working in this field, for over 30 years, there has unfortunately been very little progress made in the simulation of clouds.

SPIEGEL: Despite all these problem areas, do you still believe global warming will continue?

Storch: Yes, we are certainly going to see an increase of 2 degrees Celsius (3.6 degrees Fahrenheit) or more -- and by the end of this century, mind you. That's what my instinct tells me, since I don't know exactly how emission levels will develop. Other climate researchers might have a different instinct. Our models certainly include a great number of highly subjective assumptions. Natural science is also a social process, and one far more influenced by the spirit of the times than non-scientists can imagine. You can expect many more surprises.

SPIEGEL: What exactly are politicians supposed to do with such vague predictions?

Storch: Whether it ends up being one, two or three degrees, the exact figure is ultimately not the important thing. Quite apart from our climate simulations, there is a general societal consensus that we should be more conservative with fossil fuels. Also, the more serious effects of climate change won't affect us for at least 30 years. We have enough time to prepare ourselves.

SPIEGEL: In a SPIEGEL interview 10 years ago, you said, "We need to allay people's fear of climate change." You also said, "We'll manage this." At the time, you were harshly criticized for these comments. Do you still take such a laidback stance toward global warming?

Storch: Yes, I do. I was accused of believing it was unnecessary to reduce greenhouse gas emissions. This is not the case. I simply meant that it is no longer possible in any case to completely prevent further warming, and thus it would be wise of us to prepare for the inevitable, for example by building higher ocean dikes. And I have the impression that I'm no longer quite as alone in having this opinion as I was then. The climate debate is no longer an all-or-nothing debate -- except perhaps in the case of colleagues such as a certain employee of Schellnhuber's, whose verbal attacks against anyone who expresses doubt continue to breathe new life into the climate change denial camp.

SPIEGEL: Are there findings related to global warming that worry you?

Storch: The potential acidification of the oceans due to CO2 entering them from the atmosphere. This is a phenomenon that seems sinister to me, perhaps in part because I understand too little about it. But if marine animals are no longer able to form shells and skeletons well, it will affect nutrient cycles in the oceans. And that certainly makes me nervous.

SPIEGEL: Mr. Storch, thank you for this interview. 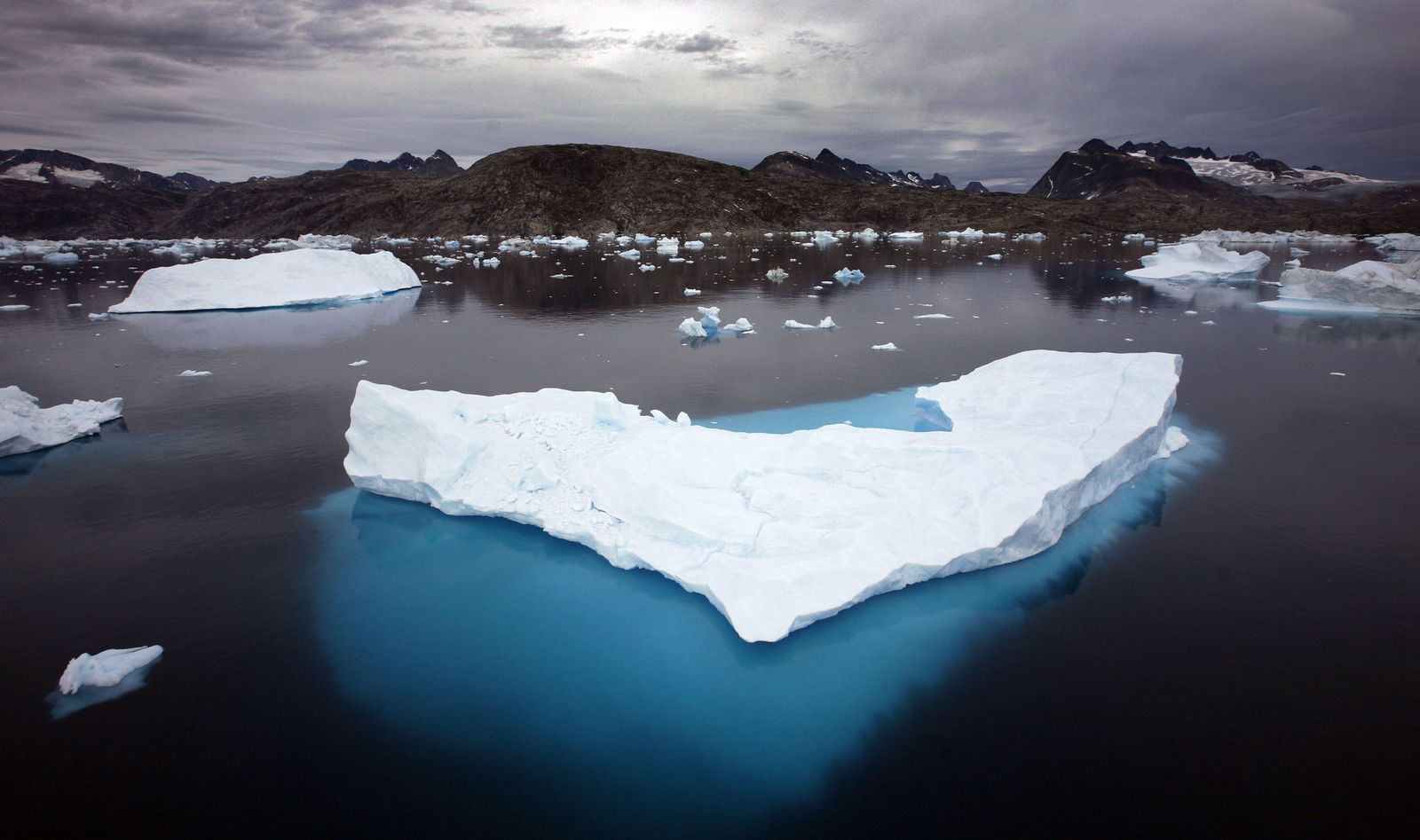 Icebergs float in a bay off Ammassalik Island, Greenland. Scientists are puzzled as to why global warming has not risen in parallel with greenhouse gas emissions.