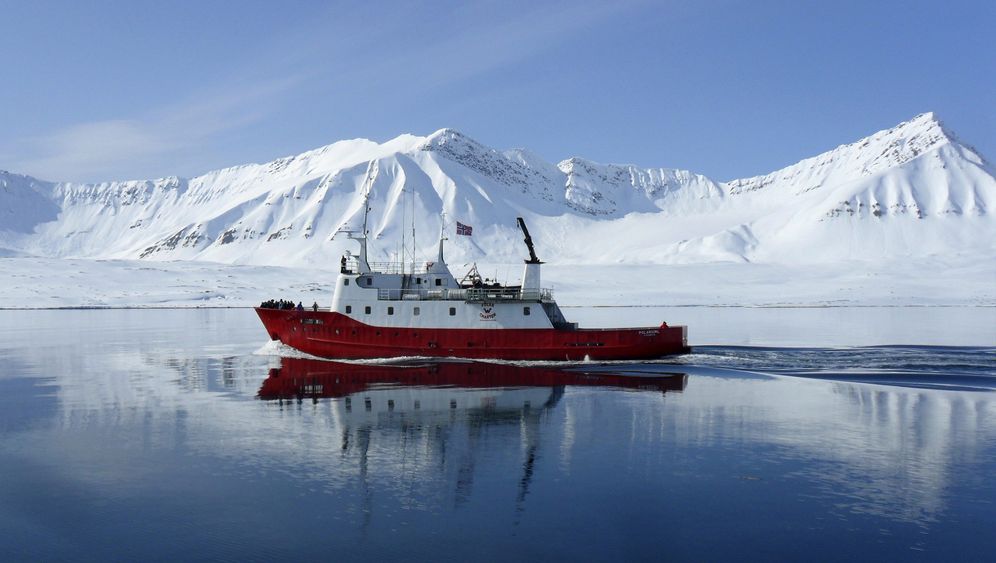 September 16, 2012 was a historic date. According to the statistics of the National Snow and Ice Data Center in the US, Arctic sea ice shrank to cover an area of just 3.41 million square kilometers (1.32 million square miles) on that day. It was the lowest coverage measured since the beginning of satellite observations in 1979 -- some 760,000 square kilometers lower than the previous record minimum in 2007. The extent of the shrinkage indicates that the Arctic is changing at a breathtaking pace; a new ocean is opening up.

At the same time, interest in both shorter shipping routes through the far north and Arctic mineral deposits is growing. Norway is one of the five countries bordering the Arctic that can benefit from their proximity to the region's presumed riches. The decades-long exploitation of oil and natural gas in waters further south has made the country extremely wealthy -- and hungry for more. At the same time, polar countries like Norway have to deal with increasing pressure from politicians and environmental groups, which complain about the risks of resource extraction and would like to see them remain untapped.

In an interview with SPIEGEL ONLINE, Norway's new Foreign Minister Espen Barth Eide talks about the politics of resource extraction in the region.

SPIEGEL ONLINE: Minister Eide, do you see yourself as representing a reckless country?

Eide: No, not at all. On the contrary.

SPIEGEL ONLINE: An environmental committee of the British parliament recently called drilling for oil and natural gas in the Arctic a "reckless gold rush."

Eide: The exploitation of Arctic resources will happen. It has always been our key policy to make sure that the rules are clear, both on who owns what and on how to exploit resources. The Arctic is not special in legal terms; it is just an ocean. The area is of course ecologically vulnerable. But it is possible to have responsible drilling.

SPIEGEL ONLINE: Some European politicians and environmentalists find it too risky and demand a moratorium on drilling there.

Eide: Our technology has moved away from the traditional offshore platforms. Now most installations are sub-sea, where there is no weather and the conditions are very stable. When drilling is done responsibly, there should be no problems. The Russians, the Canadians, the Americans and all other countries must apply the highest standards.

SPIEGEL ONLINE: The Antarctic is protected by a special treaty. In the Arctic, the coastal states object to a similar pact. Could you imagine certain parts of the region being protected as an environmental sanctuary under international law?

Eide: Some people have the misconception that the Arctic is similar to the Antarctic, a common heritage of mankind. But whilst the Antarctic is a continent, the Arctic is an ocean. And it is governed by the law of the sea. It is an area of opportunity. Sometimes it is helpful to contrast what's going on in the Arctic with the South China Sea. This attractive area has no agreement on the rules of the game. In the Arctic there is very little room for violent conflict and a lot of room for cooperation.

SPIEGEL ONLINE: So, what about an environmental sanctuary in the High North?

Eide: We need no specific rules like the ones that apply to Antarctica. The Arctic is not something completely unique compared to other waters. The Law of the Sea applies, and is also adequate to meet environmental concerns.

SPIEGEL ONLINE: The fate of the Arctic affects the whole planet. Do you understand that non-Arctic states also want to have a say in the region?

Eide: The Arctic is an ocean that connects three of the most dynamic regions in the world, East Asia, Europe and North America. It is becoming increasingly clear that it is not the end of the map. There is an incredible increase in the interest from East Asian countries.

SPIEGEL ONLINE: So far, the five Arctic coastal states have shown little willingness to accept additional players at the table.

Eide: The coastal states have some issues that only concern themselves. We are talking mainly about territorial claims in the Arctic. For all other questions, the main forum is the Arctic Council with eight members and many observers. Norway, more than other members, is open to the idea of increasing the number of observers.

SPIEGEL ONLINE: The European Union has long sought to become a permanent observer to the Arctic Council -- so far without success. Among other countries, Canada vetoed the plan. Will the EU's demand be granted approval at the next meeting?

Eide: The question is under discussion -- and it requires consensus. But Norway would like to see this happen.

SPIEGEL ONLINE: For a long time, the Arctic Council did not pass binding rules. But recently it passed a search and rescue treaty, and an agreement on oil spill response is on the way. Will the council also agree on binding requirements for oil and natural gas producers?

Eide: We are discussing it. But let us not overburden the Arctic Council with too many issues that can be solved in other existing bodies like the International Maritime Organization, for instance. There is also a big difference between oil and natural gas. Gas does not present the same local environmental dangers as oil.

SPIEGEL ONLINE: The CEO of the French company Total has proposed a ban on drilling for oil in the Arctic, but not for natural gas. Would this be an option?

Eide: We have developed the most advanced technology for subsea drilling in the Arctic. It is much safer than it used to be. People still have this vision of Exxon Valdez or the Gulf of Mexico or our Norwegian oil accidents in the 1970s. But the new technology makes operations much more secure.

SPIEGEL ONLINE: What Shell is planning to do in Alaska is classical drilling with platforms, not subsea production.

Eide: I am saying that it is possible to produce in a more modern way. That does not mean that everybody does it. In general, every concerned country should exploit the resources only in a way that it can manage. If you do not have the appropriate technology, you should not pursue exploitation.

SPIEGEL ONLINE: Russia has shown intense interest in the Arctic, while the US has remained largely passive. Will Russia become a hegemonic power around the North Pole?

Eide: Half of the Arctic is bordering Russia. By definition it is the biggest player when one looks at the coastline. We would of course be concerned were Russia to establish a broad hegemony in the Arctic. This is one of the reasons why we want to make sure that there are international agreements and organizations in place.

SPIEGEL ONLIEN: And what about China? This summer, the country sent its ice-breaker Snow Dragon through the ocean.

Eide: We used to have a very good dialogue with China on Arctic issues. Now this has stopped for a variety of reasons. But it is not that we have issues with China; it's the other way around. We welcome China in the Arctic; it is as welcome to sail in international waters as everybody else. But this case also shows why we need clear rules. And it is one of the reasons why I think that Russia will continue to support the law of the sea. The alternative is that a number of powerful states would exploit resources in a way that everyone, including Russia finds acceptable.