SPIEGEL ONLINE: One year ago, a suicide bomber killed three Germans and several Afghans at a market in Kunduz. Did you order the bombing?

Haqqani: That was the most successful strike of our mujahedeen in Kunduz since the collapse of the Taliban. Our intelligence passed on a message to the bomber, who had been waiting a week for such a golden opportunity to carry out an attack. The bomber was a resident of Kunduz.

SPIEGEL ONLINE: The three Germans killed weren't even combat troops, they were army employees in charge of purchasing refrigerators for the troops' kitchen.

Haqqani: It is not important what kind of soldiers they were. What's important is to kill and hammer out the Germans in Kunduz. The Germans are the most important enemy in the north and because they are stationed in Kunduz, the city will soon become the Kandahar of the north.

SPIEGEL ONLINE: What exactly are you planning?

Haqqani: We are going to banish the Germans to their bases more and more. If they leave their bases, we will be waiting for them with improvised explosive devices (IED) and fedayeen (suicide bombers) on every road. Because of its historical jihad background and its fundamentally anti-Western and anti-American sentiment, Kunduz is an important place for the Taliban movement.

SPIEGEL ONLINE: Who was responsible for the most-recent attempted attacks on German soldiers?

Haqqani: You just don't understand: There is no need for special orders anymore. The mujahedeen are just doing what they are responsible for doing. To kill and attack Germans is the goal and that is clear to everyone. The entire chain and network is responsible.

SPIEGEL ONLINE: Who do you take your orders from? From the Taliban's Peshawar shura or from the Quetta shura?

SPIEGEL ONLINE: What is your primary goal for this year?

Haqqani: Our spring offensive, named "ABRAT" ("teach the enemy a lesson"), is still running and the results so far have been good. We have carried out seven suicide attacks in Kunduz and engaged in combat of varying degrees of intensity 150 times with German and Afghan troops. We are implementing new techniques. But it would not be prudent to tell the newspapers and magazines of the enemy about our secret military strategy. But the new weapons include IEDs, rocket-propelled grenades (RPG) and our own special weapons, the Faedayan (suicide bombers). They will have to carry many more bodies in coffins on their shoulders if they don't come to the realistic conclusion that their forces must withdraw from our country. We view these soldiers as being the stooges of the Americans and Jews.

SPIEGEL ONLINE: NATO and US troops have reportedly already killed one-third of the Taliban commanders. There are still many more on their target list. Do you fear you could be the next?

Haqqani: That is the propaganda of the enemies. Yes, we lost some key commanders such as Mullah Dadullah, Osmani or Mansoor Dadullah, but just look at the history of the Taliban between 1995 and 1996. Back then we also lost two important main commanders -- Mullah Mohammad and Mullah Borjan -- but we still took control of Kabul and almost all of Afghanistan.

SPIEGEL ONLINE: How many suicide bombers are now ready to be activated under your command?

Haqqani: The bombers are our weapons of choice because the Germans and all the others are afraid of them. This is the strength of mujahedeen and of course we will strike more Germans in Kunduz -- more even than we did in the last couple of years. Our bombers are unchallenged and unstoppable.

SPIEGEL ONLINE: The Koran prohibits suicide. So how are you able to manage to convince large numbers of faithful to die for the Taliban cause?

Haqqani: The holy Koran forbids committing suicide, but it does not forbid the fedayeen. There is a huge difference. Suicide is when a person kills himself without any ultimate goal, but fedayeen strive for the ultimate goal, Islam. There are many examples of this in our history. The United States and international community are always talking about human rights. But what about Guantanamo and Bagram? Are the people there being treated according to these values? With the help of the holy Koran and important clerics, we have proven there is no doubt about the justification of suicide attacks.

SPIEGEL ONLINE: How do you justify the fact that suicide bombers also kill thousands of innocent civilians, most of them faithful Afghan Muslims?

"The Germans Are Viewed as Invaders"

Haqqani: We do not justify it, Islam does. Even if the head of state promised him millions of dollars, you couldn't convince someone in Germany to kill his enemy by conducting a suicide attack. But in our region we have a culture of jihad and with a single call and within a single day, dozens would be ready. We didn't attack any other country. We are only defending our own country. We are confident that we will win this war sooner or later. We are prepared for a war that could last a few decades, but we are sure that the West will start to leave Afghanistan in 2010 and that many countries will pull their troops out. 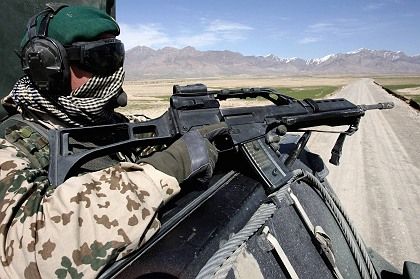 A Bundeswehr soldier in Afghanistan: "Stop the Germans"

SPIEGEL ONLINE: Do you have any sympathy for the victims of this terror? Most are innocent civilians. And many NATO soldiers come with the honest intent of helping to reconstruct your country.

Haqqani: If the victims are Muslims, then we have sympathy for them and their families. We know that their deaths are important for the success of Islam and Allah, and we honor them as faithful and believers.

SPIEGEL ONLINE: But these victims do not die willingly -- they were maliciously murdered.

Haqqani: The Afghans do not hold the Taliban responsible for such collateral damages because they know that the Taliban doesn't have enough high-tech weapons at its disposal. For example, in the Kunduz market attack, we are not using the technology Germans and Americans have available to them. Instead the Afghans condemn the invaders for killing innocent men, women and children despite their precision weapons. My guidance to the people of Kunduz is that they should avoid meeting or getting near the Germans or people from other foreign countries. Those who work for the invader in any capacity will be seen by the Taliban as enemies, just like the Germans, the Canadians and the Americans.

SPIEGEL ONLINE: The majority of the residents of Kunduz greeted the arrival of the Germans with great joy after the Taliban were driven out.

Haqqani: Who says the majority want the Germans in Kunduz? Please go out and talk to people. They are fed up with false authorities, violence and a corrupt government system. They are registering the fact that these criminals meet with the Germans at the airport, drinking wine and dancing with girls they bring in from Tajikistan. The Germans are backing the most-hated warlords, smugglers, governors and officials.

SPIEGEL ONLINE: The Afghans were at times conservative but also a liberal people. The strict form of Islam imposed on the country by the Taliban, though, in no way represents Afghanistan's culture.

Haqqani: If, according to your claim, the people in Kunduz really didn't want the Taliban, then they wouldn't be able to live amongst them and the local population wouldn't provide (the Taliban) with food and shelter. We are much more popular than the Germans in Kunduz. We are viewed as freedom fighters for the people there. The Germans, on the other hand, are viewed as invaders, and no one who is truly an Afghan in their hearts would so much as offer a glass of water to them.

SPIEGEL ONLINE: Many former Taliban and warlords today support the government of Afghan President Hamid Karzai. Why don't you do the same in order to help get your country back on its feet again?

Haqqani: We will never accept the fact that 40 nations of infidels attacked us. The law is on our side. We have the right to fight for our self-determination and our independence. It is the will of Allah and our religion. Our morals demand that we resist the virus of the foreigners.