SPIEGEL: Mr. Chalabi, how close have fighters from Islamic State come to Baghdad?

Chalabi: They are 26 kilometers away. That is menacingly close, but the situation is calm at the moment and Islamic State has not made any more advances on Baghdad. Thank God.

SPIEGEL: Do you believe they will attack?

Chalabi: The extremists have long since brought their terror to Baghdad. Islamic State has sent its suicide bombers, has detonated explosives in front of our homes. I could show you parts from a car bomb that rained down on our roof not long ago. But Islamic State will not attempt to attack Baghdad militarily. Of the six million residents in the city, four million are Shiites. And almost every adult Shiite in the city owns a weapon. Islamic State well knows that it would be ground down by a brutal house-to-house fight.

SPIEGEL: Nevertheless, many Baghdad residents have fled while others have at least begun making preparations.

Chalabi: Such reports are exaggerated. We are not panicking because we know that Islamic State cannot conquer the capital.

SPIEGEL: Until recently it also seemed impossible that Islamic State might overrun Iraq's second largest city. But now, Mosul is under the control of the jihadists.

Chalabi: Yes, but the situation was different in Mosul. There are Arabs, Kurds, Turkmens and Yazidis living there, all of whom have suffered under the sectarian central government. They feel excluded and cheated out of participation in the government. What happened there was predictable. Six months earlier, we already had clear indications that Islamic State was preparing to attack. The Islamists have long been levying their own taxes in Mosul, totaling some $5 million per month. As early as January, Kurdish President Masoud Barzani warned the government of an impending disaster.

SPIEGEL: And the government did nothing?

Chalabi: No. Maliki saw Islamic State as a way to exert pressure. If I am not re-elected, terror will befall you -- that was his message.

SPIEGEL: Would Islamic State have been able to conquer even more territory if the autonomous Kurdish government not gone on the attack?

Chalabi: The Kurds' achievement was outstanding, both militarily and diplomatically. European governments recognized this and abandoned their resistance to weapons deliveries. Germany, too, acted correctly. Now, we need a joint military leadership so that the Kurds and the army can retake Mosul.

Achmad Chalabi, 69, became notorious as the man who delivered false information regarding Saddam Hussein's alleged possession of weapons of mass destruction prior to the 2003 US invasion. Chalabi has long denied responsibility. More recently, he was seen as being a possible successor to Iraqi Prime Minister Nuri al-Maliki, but the post was ultimately given to Haidar al-Abadi, who took office last week.

SPIEGEL: The Kurds believe they are closer than ever to having their own state. Are you concerned about secession?

Chalabi: The Kurds know that they won't achieve their own state by force of arms but through international recognition. And they have certainly heard what the German foreign minister said in connection with the arms deliveries: There is no Kurdish state. But that shouldn't prevent the Kurds from continuing to develop their own institutions. Still, the best thing for them would be to remain a part of Iraq, but in return we must treat them with respect -- their nationality, their language and their culture.

SPIEGEL: And if that isn't enough for the Kurds?

SPIEGEL: In Syria, Islamic State is fighting against opposition groups rebelling against President Bashar al-Assad, who has left them alone as a result. But now, the jihadists are also endangering the regime. Do you believe that Assad regrets not having gone after Islamic State earlier?

Chalabi: No, I don't. Yes, the Islamists are now the only ones that can offer significant resistance. After taking over Mosul, Islamic State sent 75 trucks full of weapons captured from our army to Syria. But Islamic State also weakened all those forces that could have been dangerous for Assad. As such, he was able to concentrate on solidifying his power in metropolitan areas like Damascus and on the coast. Now we are faced with the question: Who is the lesser evil?

SPIEGEL: And what is your answer to that question?

Chalabi: I think it is clear. We need a united front against Islamic State and Assad happens to be the decisive power that can fight them. But the situation is preposterous because we also have to respect the calls for change. I would be in favor of a dignified change.

SPIEGEL: A senior American diplomat in Baghdad told us that Islamic State fighters are "sociopaths led by psychopaths."

Chalabi: That may apply to the fighters from the West who feel excluded in Europe and come here for that reason. But the leaders are former officers in the Iraqi army or professors. They are not psychopaths, they know exactly what they are doing, are very well organized and have a strict hierarchy.

SPIEGEL: What is so fascinating about Islamic State that hundreds of Sunnis are rushing to join?

Chalabi: Islamic State isn't corrupt. That makes it very attractive in a country like Iraq. And of course many are attracted by its military success. For the first time, the Sunnis have an effective fighting force. For Sunnis, Islamic State has a function similar to that of Hezbollah for Shiites. Before they conquered Mosul, Islamic State had maybe 10,000 fighters, but now they have many more. Their recruitment rate is enormously high: Each month, some 2,000 men are trained. And their success radiates to Jordan, Libya and the Arabian Peninsula -- even as far as Mali and Pakistan.

SPIEGEL: Yet the backbone of Islamic State is the Sunni clans that Maliki basically forced into revolt.

Chalabi: Many Sunnis joined Islamic State because they felt they were being treated poorly. Winning back their trust is the primary task of the new government. That will be difficult, but it is possible.

SPIEGEL: Where will the next battlefield be?

Chalabi: Islamic State is following a clear strategy. First, it wants to solidify its power in Iraq and Syria. Then, their fighters will try to advance to Syria's Mediterranean coast. If they are successful, that will be seen as their next great triumph. And then, their target will be Jordan, where things will be easy for them. Already, Islamic State has broad support in many cities there. And when they get there, it will once again come as a great surprise to everybody.

SPIEGEL: Why were we so wrong about the situation in Iraq and Syria?

Chalabi: You thought Islamic State was just a bunch of gunmen and underestimated their strategic and military abilities. When Sunni clans near Fallujah rebelled at the beginning of the year, Islamic State in Syria sent just 150 fighters. Now, the extremists control a huge area in Iraq. Until the US airstrikes began, they were able to move about completely freely.

SPIEGEL: US President Barack Obama announced his intention to expand airstrikes on Islamic State fighters to Syria. Do you welcome this declaration of war on the terrorists?

Chalabi: I hope we can take advantage of this new, forward-looking approach. It is shameful, but without American support, Islamic State would have taken over many more places in Iraq. Just yesterday, they wanted to capture the Haditha Dam, but airstrikes kept them from doing so. Now, our army has to make the best use of this assistance.

SPIEGEL: Do you believe that the US can stop Islamic State just with airstrikes?

Chalabi: No, effective ground troops are necessary as well. The anti-Islamic State coalition has to be totally realistic on that score.

SPIEGEL: You wouldn't be opposed to ground support?

Chalabi: The US is already supporting us with around 1,000 specialists. But it should stay at that. I am opposed to a larger military intervention with ground troops. That wouldn't be helpful.

SPIEGEL: When the last American soldier was pulled out of Iraq in 2011, Obama said that the country was a sovereign, independent and democratic state. Was that a lie, or a colossal misjudgment?

Chalabi: At the time, the president was prepared to do anything to get out of here. He had promised to withdraw the troops during the campaign and he had to fulfill that pledge, no matter what the price.

SPIEGEL: When you look around today, at the terror, the human suffering, the economic misery, do you still believe it was worth it to get rid of Saddam Hussein? And do you regret providing false information to the US to justify the 2003 invasion?

Chalabi: I don't regret anything. And we didn't provide any false information. We provided the Americans with three informants and also gave them our own assessment. But the decision to invade was one the Americans made on their own. And, as difficult as the situation in Iraq currently is, it was still right to topple Saddam Hussein. We had no future under him. Today, we at least have hope that better times are coming.

SPIEGEL: Mr. Chalabi, thank you for this interview. 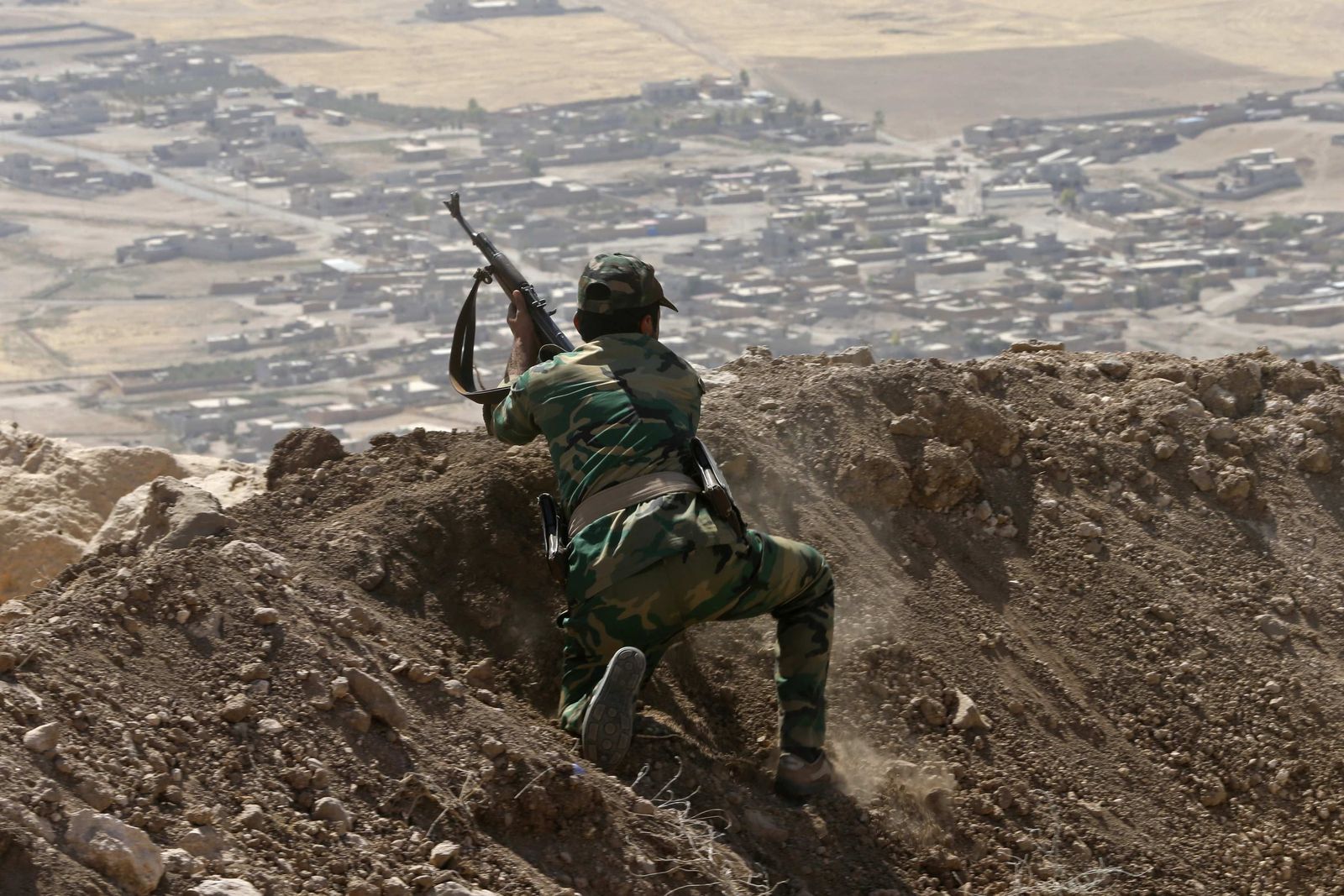 A Kurdish Peshmerga fighter moving into position in a battle with Islamic State.