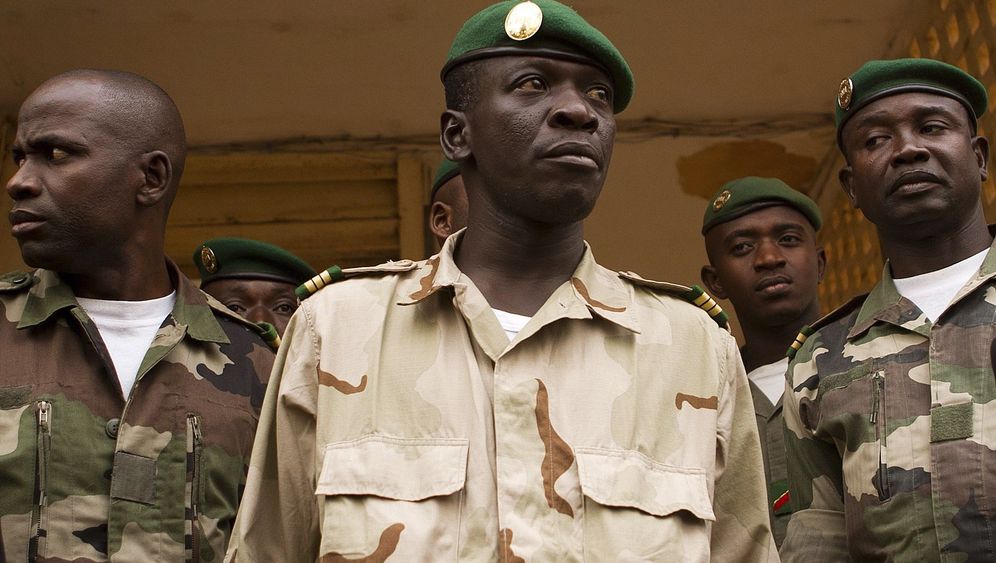 Captain Amadou Sanogo says he is just a simple soldier. But unofficially, the 40-year-old has been Mali's strongman since he led a coup in late March last year, toppling the government of President Amadou Toumani Touré. Sanogo went on to suspend the constitution, and then put power in the hands of a transitional government in response to international pressure, though he remains Mali's de facto leader.

In the weeks that followed, Islamists took over northern Mali. Now, the formerly unstable yet democratic country is in danger of becoming the next Somalia. Despite the troubles that have followed the coup, Sonogo tells SPIEGEL that he rescued the country.

SPIEGEL: Mr. Sanogo, do you regret plunging your country into chaos with the coup you staged a year ago?

Sanogo: What are you talking about? I saved the country! We were on the verge of ruin at the time.

SPIEGEL: But it was only after you assumed power that the Islamists established a reign of terror in the north and introduced Sharia law. That couldn't have been your objective, could it?

Sanogo: The Malian army had already been overrun by rebellious Tuareg fighters before that, which is why I intervened. This army is a disaster, completely pathetic. It lacks equipment, and it's poorly trained and corrupt. We have officers with no schooling at all. A wounded, ordinary soldier can die on the street without anyone helping him, while a general's son is flown to Germany and treated in a first-class hospital just for having a headache.

SPIEGEL: You yourself were trained in the United States.

Sanogo: I attended an infantry school, completed various military courses and worked as an interpreter. America is great country with a fantastic army. I tried to put all the things I learned there into practice here.

SPIEGEL: How does your coup fit into that?

Sanogo: Coup isn't a nice word. I prefer to say that I performed a necessary medical operation. The former president, Amadou Toumani Touré, didn't recognize that the country was sick and needed to be healed. But a patient who refuses to take medicine will die. And that's what happened in Mali. The old regime was sick and now it's dead. I helped it die more quickly in order to make a new beginning possible.

SPIEGEL: What was the sickness?

Sanogo: Touré was no democrat. It was already clear before the elections that he was going to be president, and he rigged the election. Where is this sort of thing done? So I overthrew him and appointed a transitional president, and now we are waiting for truly democratic elections.

SPIEGEL: That isn't quite true. Although voter turnout was low, observers concluded that it was a fair election. But please tell us this: How exactly does a coup work?

Sanogo: I won't tell you that. Perhaps I'll talk about it later, but all I can say now is that every coup is different. There is no sure formula.

SPIEGEL: Still, you didn't manage to liberate the north from the Islamists. For that reason, French troops have been in the country for the last two-and-a-half months, and now the German military is also going to train Malian soldiers.

Sanogo: The French are welcome, and so are the Germans.

SPIEGEL: That hasn't always been your position.

Sanogo: You shouldn't believe the media. I'm pleased about the foreign soldiers, and it doesn't bother me that they are from the former colonial power. The main thing is that the Islamists are gone. We would never have been able to do it alone.

SPIEGEL: How dangerous are the Islamists for Mali and the entire region?

Sanogo: Extremely dangerous. These guys came from all kinds of countries to establish a base here. They wanted to use Mali to calmly prepare attacks on Europe. That's why the fight against terrorism is an international matter, not just a Malian problem.

SPIEGEL: The Islamists have withdrawn from the cities into the desert. How long will the fighting last?

Sanogo: The conflict is far from over, which is why the foreign troops must remain in the country. If they withdrew, everything would start all over again. Our army isn't capable of controlling this huge area without help. And the troops from the Economic Community of West African States (ECOWAS) can't do it alone, either.

SPIEGEL: The north has been a trouble spot for decades.

Sanogo: It's true that the Tuareg are constantly rebelling. They did in the 1960s, in 1990 and in 2007. But this time a new form of terrorism was added to the mix. Most of all, the Islamists had weapons and lots of money. Both of these things are most certainly not coming from Mali, but from abroad. We are concerned that there are sleeper cells that have withdrawn to countries like Niger and are just waiting to strike again.

SPIEGEL: Do you see differences between the Tuareg and the terrorists?

Sanogo: If a Tuareg joins an Islamist group, he is a terrorist. It's that simple.

SPIEGEL: A new president is to be elected in July. Will you accept the winner, or could there be another coup?

Sanogo: If the elections are conducted correctly, I'll stay out of it.

SPIEGEL: You won't run for office?

Sanogo: I have no political ambitions, and I won't run. But if I did, I would stand a good chance of winning, because I'm very popular with the people.

SPIEGEL: Mr. Sanogo, thank you for this interview.