On Sunday, Formula One racing is set to return to Bahrain, but the country and opposition are divided over the event. Wefaq, the leading Shiite opposition group, has said it is not opposed to staging the race. Jasim Husain, a former member of parliament and representative of the group even visited the racetrack on Thursday to give the event a boost.

Still, hundreds of protesters in the country are calling for three "days of rage" to begin after Friday prayers to stop the race. They fear the prestigious event will provide a PR coup for a government that is guilty of serious human rights violations. Bernie Eccelstone, the face and voice of Formula One, has even described Bahrain as a "quiet and peaceful" country.

Since the uprising in February 2011, at least 50 people have been killed in violence between security forces and some within the country's majority Shiite population. While some opposition groups are calling for reforms within the current system, some protesters, like al-Khawaja, are seeking to topple the royal family of King Hamad bin Isa Al Khalifa, which is Sunni and has ruled for more than 200 years.

Zainab al-Khawaja, the 28-year-old daughter of Abdulhadi al-Khawaja -- a protest leader detained by Bahraini officials -- has played a prominent role in protests since her father's arrest. A Bahrain military court convicted Abdulhadi al-Khawaja last June of plotting to overthrow the royal family and sentenced him to life in prison. For almost 70 days, he has been on a hunger strike. Although a government spokesman says he is being provided with around-the-clock care and that he "is taking, with his consent, the necessary nutrients," a number of human rights groups fear he could be near death and are calling for him to be freed.

Last week, human rights group Amnesty International called for al-Khawaja's "immediate and unconditional" release, saying in a statement that Bahrain's "determination to persecute him seems to override any consideration for justice or humanity." The group described his imprisonment as "unfair" and alleged he and 13 other prominent opposition activists are being "held solely for peacefully exercising their rights to freedom of expression and assembly, and who have not advocated violence."

Human rights abuses in Bahrain have come under the more intense focus of the international community since February 2011, when thousands of demonstrators protested in the capital of Manama for political reforms. The country's rulers quickly moved to quash the rebellion and prevent the Arab Spring from spreading into Bahrain. Security forces arrested thousands who participated in the Pearl Square protests.

In June, the king appointed a special commission led by Egyptian-American human rights expert Cherif Bassiouni to carry out an inquiry into the protests and violence. The commission issued a report in November identifying human rights abuses and also prescribing steps the government should take to remedy the situation, which the king agreed to implement. However, the group Human Rights Watch claims that "Bahrain's rulers have not fully carried out" the commission's "key recommendations." The organization says investigations have not been conducted into senior officials implicated in torture and unlawful killings and that military court verdicts against protest leaders "whose sole offenses involved free expression and peaceful assembly" have not been overturned.

In the case of al-Khawaja, who has a turbulent relationship with the royal family, the government has accused him repeatedly in the past of seeking to overthrow the monarchy. Al-Khawaja and his family were forced to go into exile in Denmark during the 1980s and they were only allowed to return to the kingdom in 2001 under a decree issued by King Hamad.

Some Western and Arab intelligence services accuse al-Khawaja and some other activists in Bahrain of having received military training in Iran and of maintaining close contact with Hezbollah. "They speak in the name of human rights, but as a matter of fact their mission is a political one," an American security official said. "We are extremely worried about the contacts they have with some questionable groups and figures." Al-Khawaja's daughter Zainab has denied such claims, saying she does not believe her father received training in Iran and that her family receives "no support" from Hezbollah.

In an interview with SPIEGEL ONLINE, Zainab al-Khawaja says her father is very "weak" after being on a hunger strike for more than two months, that "he has trouble speaking" and that her family fears "he might fall into a coma soon." She also discusses the ongoing protests against the government and repeats the protesters' demand that this weekend's Formula One race be cancelled as it was in 2011.

SPIEGEL: Protesters in Bahrain are calling for the cancellation of the Formula One race, which is scheduled to take place this Sunday. Why are you protesting against this international sporting event?

Zainab al-Khawaja: This big sporting event has been used by the regime to trick the world. The people in the West are supposed to believe that Bahrain is a country whose people live a life of peace, but we suffer under a regime that does not want to hear our screaming. The people of more than 20 villages are participating in the protests. They are fed up with the fact that they cannot express their opinions freely.

SPIEGEL ONLINE: Will you continue with your protests, even if the race proceeds?

Al-Khawaja: We will not keep silent, even if the Formula One is taking place. We will protest for human rights and freedom.

SPIEGEL ONLINE: It is largely Shiites who are protesting against the ruling Sunni royal family of King Hamad bin Isa Al Khalifa.

Al-Khawaja: I am Shiite and proud of it. But the green bracelet I am wearing on my right arm, and which identifies me as a Shiite, does not symbolize that I believe I am superior. I am first and foremost a Bahraini.

SPIEGEL ONLINE: Your 50-year-old father, Abdulhadi al-Khawaja, is the most famous human rights activist in the kingdom. He was arrested one year ago and has now been on a hunger strike for over 60 days. Do you have any hope that he might be released soon?

Al-Khawaja: The only crime my father has committed is that he is a human rights activist who is demanding freedom and democracy. That's why he has been arrested, interrogated and tortured. We are not expecting any justice from the trial (at the court of appeals) that will take place soon.

SPIEGEL ONLINE: Did your father want to overthrow the regime?

Al-Khawaja: He called for democracy in Bahrain. Even I was arrested. It was reason enough for the security forces that I tried to visit my father in the military hospital. I was interrogated for two days.

SPIEGEL ONLINE: But the king has acknowledged that mistakes were made, and he has even begun introducing reforms.

Al-Khawaja: These are miniscule changes compared to the crimes the regime has committed against people who have protested peacefully for their aims. Some have paid for this with their lives. I am not proud of the King of Bahrain, in whose name people have been killed.

SPIEGEL ONLINE: But the protests didn't remain peaceful. Some of the demonstrators resorted to violence.

Al-Khawaja: It is a reaction. We don't want peace over freedom. We will choose freedom over peace. We will go on with our fight for self-determination and democracy. But if things continue the way they are, I expect the situation to become more violent.

SPIEGEL ONLINE: Are you calling for people to stop attacking police and to stop throwing stones and Molotov cocktails?

Al-Khawaja: No, I will not stand against the victims' reaction. It really amazes me when people ask if I will condemn it. I will not.

SPIEGEL ONLINE: The motto of this Formula One race is: "UNIF1ED -- ONE NATION IN CELEBRATION." Will that be possible?

Al-Khawaja: It is simply not the case that we are celebrating. The Bahraini people are in a lot of pain and they don't feel that the government is listening. More than 20 villages are protesting on a daily basis.

SPIEGEL ONLINE: But it seems as though the numbers of protestors have recently been declining.

Al-Khawaja: During the march on March 9, tens of thousands of protestors went out onto the streets.

SPIEGEL ONLINE: This happened after Shiite cleric Sheik Isa Qassim, the highest religious authority for Shiites in Bahrain, called in his Friday sermon for people to join the protests.

SPIEGEL ONLINE: Some Shiites who were fired from their jobs at the racing circuit for several months because they protested at Pearl Square are now back at work. They say they hope the Formula One race will take place because it would help them economically.

Al-Khawaja: The protests in Bahrain did not take place because of a shortage of bread. This is an issue of pride and dignity. People are sick and tired of living in a country where they cannot speak about what is on their mind. I am speaking out, but we are paying a high price for it.

SPIEGEL ONLINE: The Shiite workers at the circuit who are now back at their jobs say they want the race to take place so that their country can heal.

SPIEGEL ONLINE: In June, the king commissioned Cherif Bassiouni to carry out an inquiry into the protests and the resulting violence. The king promised to implement the commission's recommendations regarding a police reform and reform of the judiciary. Do you consider this commission to merely be a "cosmetic change"?

Al-Khawaja: The commission was brought in and paid for by the king. Why did the king convene it? To start the healing? To turn to a new page? The independent commission the king brought in said that prisoners were tortured and mistreated and that people who were for freedom of speech should be released. But have they been released?

SPIEGEL ONLINE: You don't consider the reforms taking place to be sufficient. Do you want the regime to be overthrown?

Al-Khawaja: I want self-determination. If that means having a constitutional monarchy as the first step, fine. But, in the end, people in Bahrain should have the right to vote and choose their president. A single family should not be allowed to rule on its own.

SPIEGEL ONLINE: Both the king and the crown prince have suggested they would open the doors to a dialogue with the opposition. Would you agree to that?

Al-Khawaja: A dialogue sounds like a great idea, but we don't think the government actually wants one. The royal family lied in 2011 when they said they were ready for dialogue. Now we have suffered even more and we will not give up our rights.

SPIEGEL ONLINE: Was it not the king who released prisoners and allowed your family to return to Bahrain from Denmark?

Al-Khawaja: Yes, we were allowed to come back after spending much of our lives in exile.

SPIEGEL ONLINE: The government claimed your father had sought to overthrow the regime.

Al-Khawaja: If someone is calling for democracy, he is calling for an end of a dictatorship and if this is the will of the people, this could also mean overthrowing the regime. 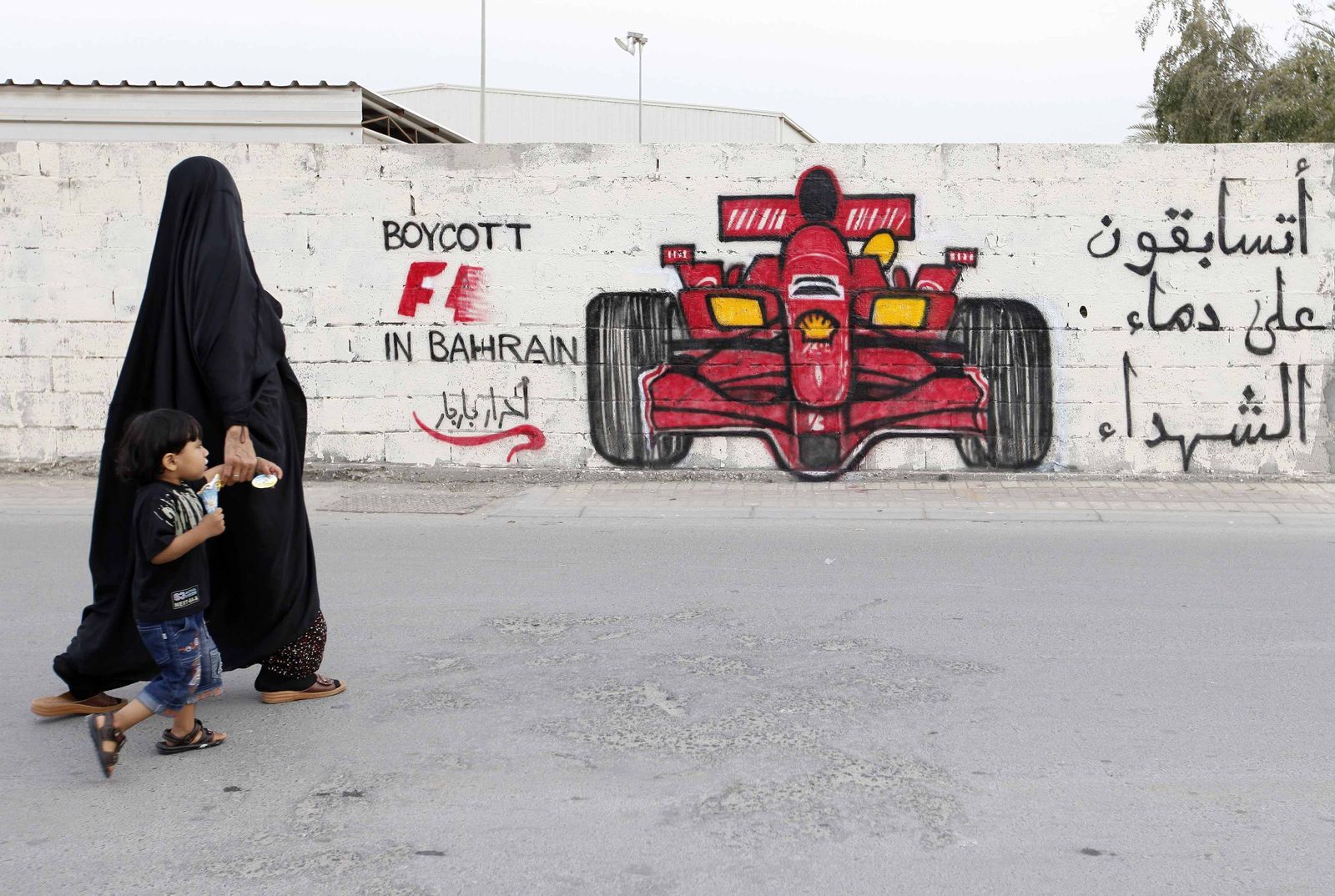 A woman and her child pass in front of anti-Formula One graffiti in the village of Barbar, Bahrain.