SPIEGEL: The attacks in Paris had many similarities with 9/11: Both were apparently planned in regions under the control of terrorists. Will we see an intervention in Syria like the one that took place in Afghanistan after the Sept. 11, 2001 attacks?

Rhodes: While the impact in Paris is on par with how people in New York felt after 9/11, there are important differences between al-Qaida and ISIL (Islamic State of Iraq and the Levant, another name for Islamic State). The President believes that the lesson we have to take away from the last decade is that ground invasions and occupations of countries in the Middle East are not the most effective way of addressing terrorism, because they are costly and difficult to sustain, but also because you are going to need a mixture of anti-terrorism efforts and local political stability and partnership in these countries. Instead of a response that would involve a ground invasion with essentially the international community taking ownership of all events on the ground in Syria, we believe it is better to pursue the approach that we are taking: military action and strikes, but we're supporting forces on the ground that can ultimately hold territory that is taken from ISIL while trying to pursue political resolution to a civil war inside of Syria.

Rhodes: That's entirely a decision for the French. We are already in a military operation with the French in Syria. Many NATO countries are part of the ISIL coalition, but they're going to have different roles in the counter-ISIL campaign. This will not look like Afghanistan, where you had a significant investment of ground forces from different NATO countries.

SPIEGEL: Would NATO forces in Syria send the wrong signal?

Rhodes: Yes. It's not simply a reluctance to commit ground forces. It's a belief that that's not a sustainable approach. Were you to introduce significant foreign ground forces, they might be able to push ISIL out of an area, and when we hold that area, would that lead to a situation like we had in Iraq where you end up fighting a terrorist insurgency? The sustainable approach is for people to take and hold their own communities with our support.

SPIEGEL: Can you imagine a situation in which President Obama would authorize American troops on the ground in Syria?

Rhodes: He has authorized Special Forces, although they won't have a role in which their mission is to engage in combat with ISIL. We don't think that, in the long term, foreign forces can occupy and govern these countries. We've taken that lesson from the Iraq war. If you look at the origins of ISIL, it was al-Qaida in Iraq and their integration with the Iraqi insurgencies. At some point, the cycle of conflict has to be broken.

SPIEGEL: The only really effective force in Syria that might be able to take territory from ISIL seems to be the Kurdish People's Protection Units (YPG), which are affiliated with the PKK. Why doesn't America offer the Kurds additional support with heavy weapons?

Rhodes: We have seen that in northern Syria, we have been able to make progress against ISIL by arming those forces and providing coordinated air strikes. One of the things that's going to be important, though, is that it is not simply Kurds, but also Sunni Arab forces that are part of the advance against ISIL around Raqqa and in eastern Syria. The US Special Forces contingent that we recently announced would go into Syria has been, as one of its principal missions, helping to facilitate the success of those operations by providing advice.

SPIEGEL: In Vienna, diplomats from the Middle East, Russia and the West are discussing a possible political solution for Syria. Is it not necessary to establish a similar forum for the coordination of military activities -- even with Russia and Iran?

Rhodes: I certainly would not envision any military cooperation or coordination with Iran. In terms of Russia, what we have established with them is the ability to de-conflict our operations so that we have channels of communication and we can avoid operating in the same areas in ways that could prove dangerous. That is not at the level of coordination. It's at the level of de-confliction at this point. Thus far, we have seen the majority of Russia's strikes in Syria against non-ISIL opposition targets. We have urged the Russians to focus their military efforts on ISIL.

SPIEGEL: In the wake of the Paris attacks, there have been discussions in Europe about whether refugees pose a threat. What's your view?

Rhodes: We believe it's important that, even as we are focused on this sort of terrorism, there is a humanitarian challenge, and it's going to be important for there to be a continued focus on how we're providing assistance to displaced people and recognizing the enormous challenges associated with the refugee flows. We recognize that this is going to continue to be difficult, but there has to be a process by which you can focus on intelligence that disrupts terrorist plotting and identify who is a threat, but when you have displaced families, that there's some safe haven for people who are incredibly vulnerable. There is going to have to be some continued investment in terms of welcoming Syrian refugees to different countries who are in the coalition, including the United States for that matter. This is an area where President Obama has much admiration for what Chancellor Merkel has done thus far.

Ben Rhodes, one of Obama's closest advisors, is deputy national security advisor for strategic communications and speechwriting. He wrote Obama's famous speech to the Muslim world in Cairo and has helped shape Obama's foreign policy. 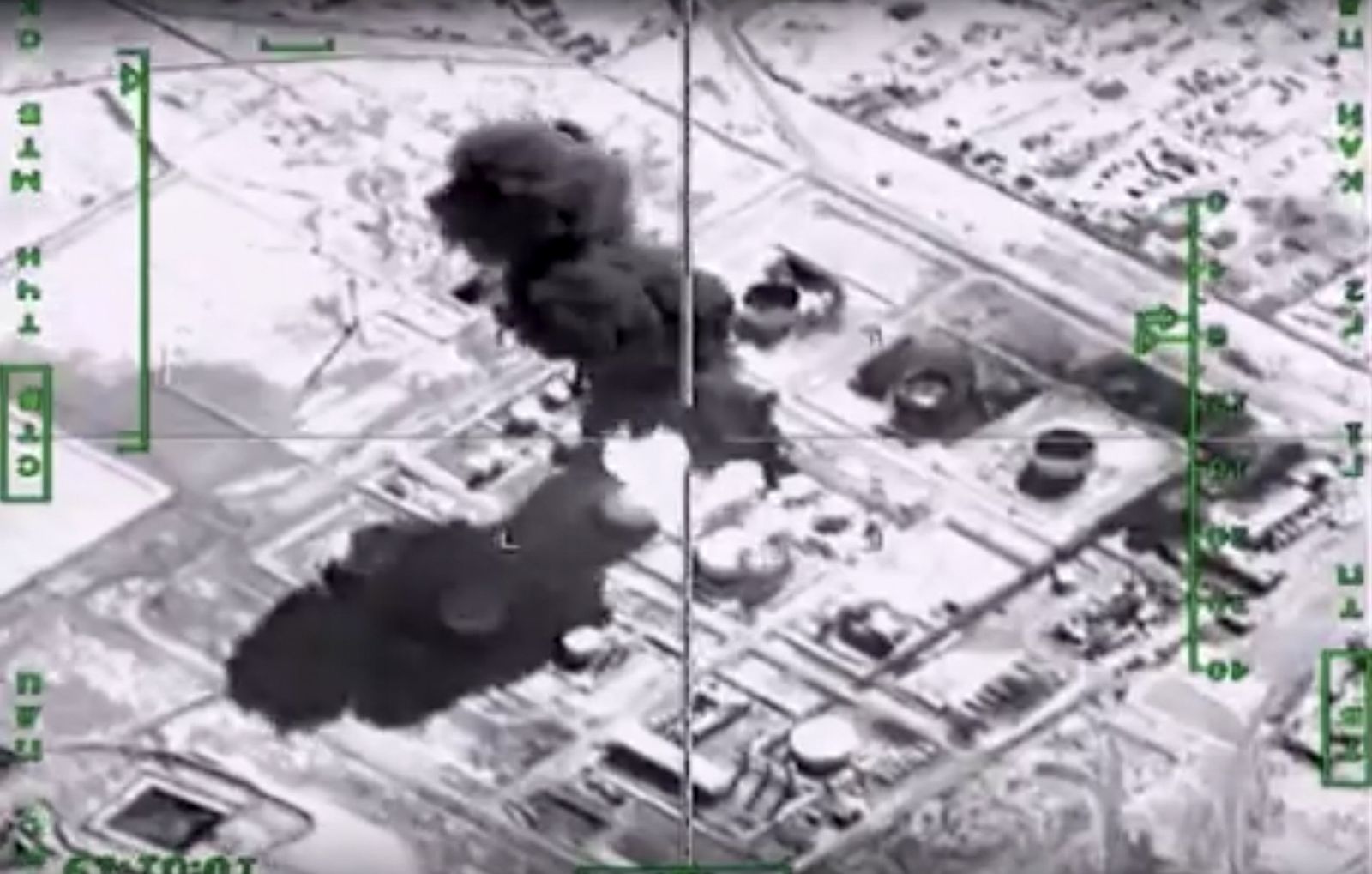 A Russian photo showing an attack on a supposed Islamic State oil facility in Syria.