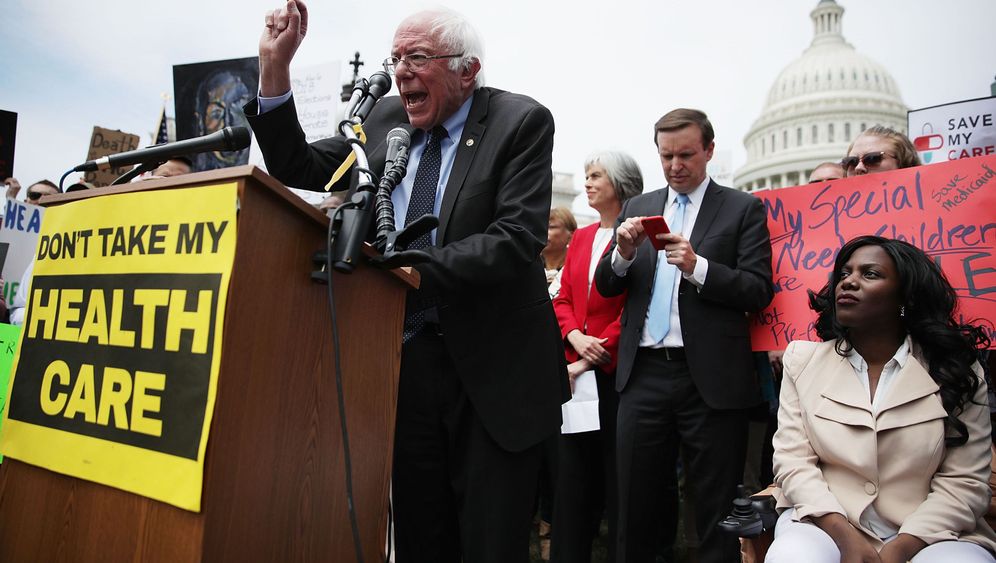 Photo Gallery: A Leader on the Left

The heart of the resistance looks like a dilapidated Best Western somewhere in the American heartland: plush, blue wall-to-wall carpeting, a floral-patterned sofa and a table with tourism brochures. An oil painting of a North American forest hangs on the wall.

It's the Washington office of Bernie Sanders, senator from the state of Vermont. He is the man many voters would have preferred as the Democratic Party's presidential candidate instead of Hillary Clinton. Sanders, 75, inspired young people throughout the country and is now considered to be one of the leaders of a movement that calls itself the "resistance" in opposition to President Donald Trump.

Wednesday of last week had just been another crazy day among many others in current American politics. While Trump was traveling abroad, more new revelations had emerged about Russian involvement in the election. The previous day, the administration had presented a budget that would, in the eyes of its critics, devastate America's social safety net. Harldy a day goes by under Trump's leadership that isn't characterized by chaos and scandal.

Sanders is sitting deep in a chair in his Senate office, his face with its usual slightly reddish tint. He is wearing a loose, dark blue suit and a striped tie.

Has he ever lived through such dramatic times? "I think this is a unique moment in modern American history," he says in his characteristic Brooklyn accent. "What you have is a president who is moving our country in an authoritarian direction, in a way that we have never really seen."

Is Trump in his eyes an autocrat, or does he simply fail to understand the constitutional limits of the presidency? "The answer is both," Sanders replies. "I think he has authoritarian tendencies. The fact that he feels comfortable with authoritarians like Russian President Vladimir Putin, Philippine President Rodrigo Duterte and others around the world, suggests to me that he is an authoritarian-type personality." Trump, says Sanders, is also working "hand in glove" with the "billionaire class to move this country in a very oligarchic direction."

Instead of looking at his interlocutor when answering questions, Sanders gazes at the wall with an expression of deep concentration. When he gets worked up, he waves both arms in the air. This man, who inspired so many people last year, isn't exactly a cheerful person. He seems like a maverick who, despite his age, has a youthful smile. He speaks clearly and directly, and while he may come across as a little bit stiff in the process, it is what makes him authentic to his fans.

Are America's institutions strong enough to resist Donald Trump? "Good question!" Sanders snarls, looking pleased. "We certainly hope so, but he is trying to attack those institutions." When Trump attacks the press and tries to intimidate it, he wonders, "will the media remain strong and be willing to take him on? I think at this point, they have. Will the judiciary remain independent? I certainly hope that they will."

He says he is now working to drive "right-wing Republicans" out of Congress in next year's midterm elections and Trump's unpopularity is already putting pressure on Republican candidates throughout the country. By-elections are scheduled in some traditionally Republican districts in the coming weeks, and suddenly the Democrats have a higher chance of winning some of them.

Many Trump opponents, however, don't want to wait until 2018. They want the president removed from office because of his attempt to stop the FBI's investigation into his campaign team. But Sanders is reserved when it comes to impeachment. "You have to allow the facts to go where they go," he says. "If we are premature on that, if we are so-called 'jumping the gun,' making conclusions that are not yet based enough on facts, I think that could be counterproductive. The goal is to bring the American people as a whole along in a bipartisan way."

The essence of his argument is that he doesn't want people to believe that this is just a political attack on Trump and that he wants to bring Republicans along. "If Bernie Sanders says something, people say, 'Well, you don't like Donald Trump.'" That, he adds, is why it's a good thing that former FBI Director Robert Mueller has been appointed as special counsel. "You have somebody who a lot of people respect," says Sanders.

In his opinion, would the Democrats be making a mistake by focusing solely on Russia? If everything is about Russia, says Sanders, many people will say: "Hey, all of that is interesting, but you know what? I can't afford health care. I don't have a job. My kid can't afford to go to college. Why don't you pay attention to our needs?"

"I think we have got to do both, and I am doing my best not to simply get involved in the Trump controversies, but to stay focused on his disastrous budget, their disastrous health-care plan, and more importantly, bring forth a progressive agenda, which can excite working people and young people all over this country," Sanders says.

Trump is 'Fraud and a Liar'

He goes on to talk about Trump's budget draft, which he says "provides trillions in tax breaks for the top 1 percent, while making massive cutbacks in programs for the elderly, the children, the sick and the poor." He wants to fight Trump on his health-care plan, which, according to calculations by the Congressional Budget Office, would result in 23 million people losing their health insurance by 2026.

In many respects, his agenda sounds like a call for a European social welfare state, which has never before existed in theUnited States. It would include things like universal health care and a free college education.

Bernie Sanders is quite familiar with a portion of Trump's voters. Many of them were also drawn to him last year, especially blue-collar voters in the Midwest, some of which ended up voting for Trump instead of Hillary Clinton after he promised them that he was going to "renegotiate" free trade agreements and rebuild American industry. When Sanders met people who couldn't decide between Trump and himself, he told them that Trump is a "fraud and a liar" and that he would not keep his promises, "which, of course, turned out to be true." Sanders also says it is a myth that Trump's voters will never abandon Trump, no matter what he does. But he believes his voters are sensitive to the fact that "this guy came in and everybody is picking on him."

Sanders himself was never a member of the Democratic Party. He calls himself a socialist, a part of the political spectrum that has long been shunned in the United States. When asked how the Democrats lost the blue-collar vote to a billionaire, he has plenty to say. This is, after all, his main issue.

"Over the years, the Democratic Party became a party which was heavily influenced by big money interests," he says. That explains why many blue-collar voters in the country said: "Well, Democrats talk a good game, but in reality, they are also on the side of the wealthy and powerful." When all that came together, says Sanders, many people thought: "We don't really like Trump, but we'll give him a shot."

The Democrats, he says, were particularly short-sighted on one issue. "Under Obama, the economy improved, absolutely." Notwithstanding that, "there are pockets all over this country -- in the Midwest, in the South, where workers were actually worse off at the end of Obama's eight years than when he came in." Then he says bluntly: "Democrats did not pay attention to that reality. Trump did." But even though Sanders still isn't a member of the party, he has changed the Democrats through his candidacy and he believes they should take a page from his own movement.

His book, "Our Revolution: A Future to Believe In," came out in German this week. It is a testament of sorts to his unexpectedly successful presidential campaign. Large sections of it are devoted to his political vision, but it is also a kind of autobiography. He describes growing up in Brooklyn as a child of Jewish parents. His father's family, which came from Poland, had been murdered by the Nazis and the memory of the war and of the Holocaust, he writes, shaped developments in his own life.

He describes how he began his career in the state of Vermont, where he ran unsuccessfully for a seat in the U.S. Congress, then was elected mayor of Burlington thanks to a rainbow coalition of environmentalists and trade unionists. Finally, a lifelong political outsider, he found himself at the center of an anti-establishment movement last year.

Is it true that he didn't even know the word "millennial," the designation for the young generation he had inspired so much? "That's true," says Sanders. And how did he manage to inspire it so much? "That is a good question, and you know what? I still don't know the answer. I honestly don't." He says that he has just read a book about Hillary Clinton called "Shattered," a relentless inside view of her election campaign. Sanders says he was surprised to read "that you needed three speechwriters to tell you why you're running for president. I don't need somebody to tell me why. If I didn't know why I was running in the first place ...  You know, you've got to know what you stand for."

The book describes how many people were involved in Clinton's first speech, and that until the very end, her campaign was still pondering the question of why exactly she wanted to be president. "That's pretty incredible. So, we knew from day one." He wrote his first speech himself, he says, with some editing help. Is he ruling out running for president again in 2020? "What I always say when I'm asked this question is that it is premature and that it is a question that the media focuses on too much."

He must go, he says, with a friendly handshake. He's back on TV a short time later. This time, talking about the "grotesque, immoral budget," and healthcare reform. He seems upstanding, serious and angry.

3 Bilder Photo Gallery: A Leader on the Left 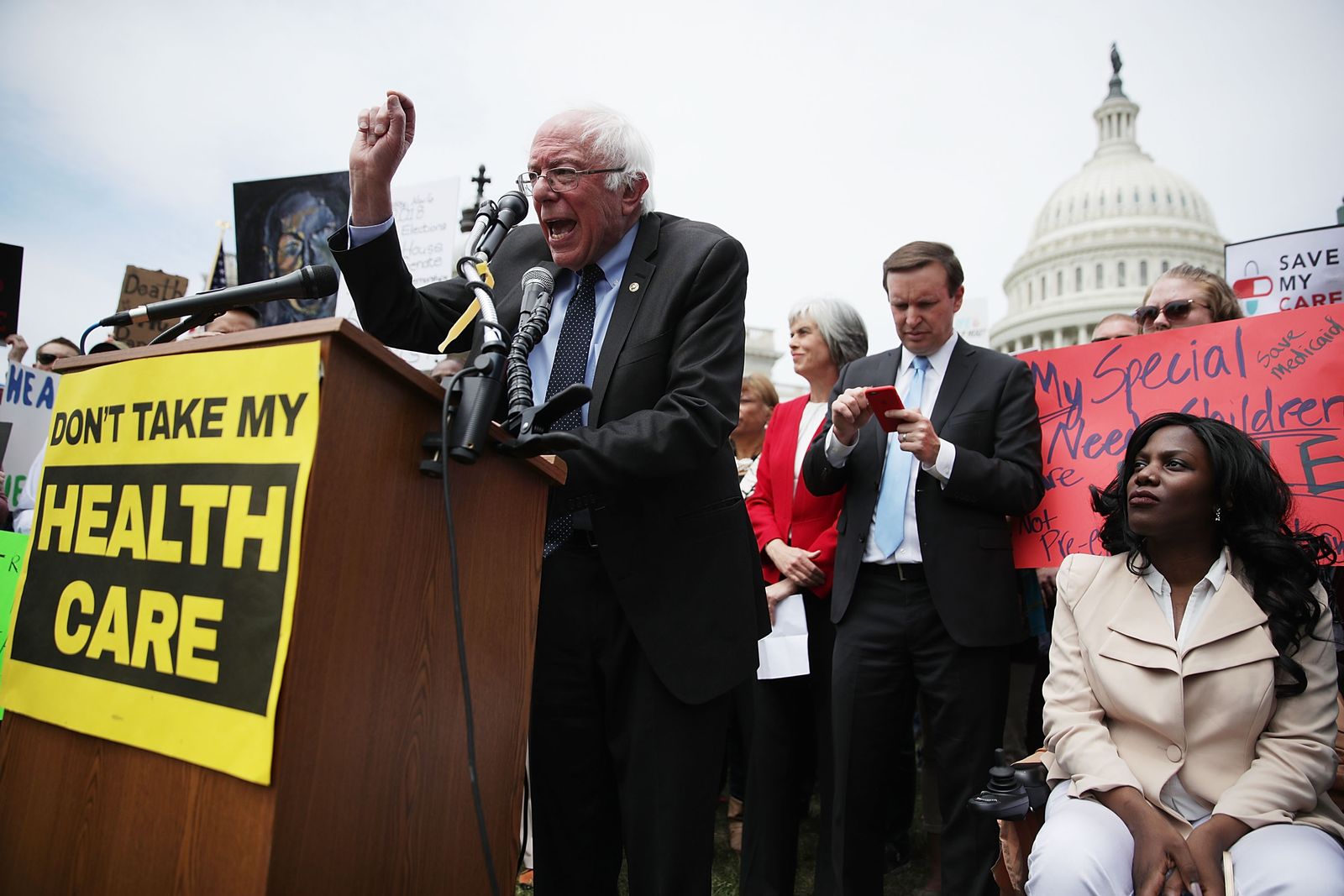 Vermont Senator Bernie Sanders at a rally against President Donald Trump's proposal to reform the country's health policies. During the Democratic primary for the most recent U.S. presidential election, he energized many young Democrats with his calls for socialist policies.