SPIEGEL ONLINE: Minister Freeland, your German counterpart Heiko Maas said recently that even during your first meeting, the two of you were finishing each other's sentences. It seemed like love at first sight.

Freeland: I was delighted Heiko said that because it is true. I think Minister Maas has emerged as one of the leading voices in the world in calling for the return of the rules-based order, which is in jeopardy right now. He also underlined that liberal democracies all around the world are under attack and that we have to build momentum against that. I totally share this view.

SPIEGEL ONLINE: It's the danger that brings you together?

Freeland: These dangers are at the core of our foreign policy at the moment and they should be for every government right now. It's a moment where we all have to stand together. We feel very connected to Germany in this regard. Heiko really took the leading role in this debate and was very frank. People in Germany might underestimate the impact of German foreign policy; many people in Canada think the same about ours. The truth is, though, that the world takes Germany very seriously.

SPIEGEL ONLINE: Strengthening democracy is not exactly a controversial position. But how can that be done now that the U.S., the largest Western power, has left the club?

Freeland: I would disagree with the premise. We cannot and must not say the U.S. has ceased to be a liberal democracy. It is still one of the largest liberal democracies worldwide. Canada is and will always be extremely close to the United States. The U.S.-Canada relationship goes far beyond any current dispute with the White House because our people are closely connected on a daily basis. We know them to have a vibrant and strong democracy.

Freeland: There are clearly issues where we -- and this is true of Germany as well -- hold a view the current White House does not share. We disagree with some of Donald Trump's decisions, especially the withdrawal from the Paris Agreement to fight climate change. We will work more closely with our European partners now. But at the same time, we continue telling our American friends that the door is open to come back to the agreement.

SPIEGEL ONLINE: Currently, your government is negotiating with Washington on a new free trade agreement, to which Mexico will also be a party. Yet Trump has called Canada's steel industry a national security threat. How are negotiations possible against such a background.

Freeland: The claim by Trump that Canada poses a threat to U.S. national security is absurd given the fact that under U.S. law, Canada is part of the U.S. defense-industrial complex. Still, we are encouraged by the progress Mexico has made in negotiations over a new free trade agreement and are optimistic that Canada can join that deal.

SPIEGEL ONLINE: In light of Washington's withdrawal from the Iran deal and the sanctions the U.S. has imposed against all companies that continue to do business with Tehran, Germany has proposed an international payment system that is independent from the U.S. dollar. Do you support this idea?

Freeland: First of all, Canada stands for the fact that international deals are valid once they have been agreed upon, regardless of whether a new government comes into power. We also, of course, inherited some deals from our predecessors which we didn't like that much. But Canada's word has to be good and reliable.

SPIEGEL ONLINE: Still, the Iran deal has become much weaker as a result of the U.S. dropping out. Does the world need a new payment system free of the U.S. dollar, thus circumventing sanctions imposed by Washington?

Freeland: I think it's something which we have to think about very carefully. It's an issue which is rather more important for European companies than for those from Canada.

SPIEGEL ONLINE: In a tweet a few weeks ago, you demanded the release of Saudi Arabian blogger Raif Badawi and his sister Samar. Did you expect the Saudis to retaliate by recalling their ambassador to Canada and breaking off all relations with your country?

Chrystia Freeland, 50, has been foreign minister in Prime Minister Justin Trudeau's cabinet since January 2017. A former journalist who once reported extensively from Ukraine, she is a member of Trudeau's Liberal Party. Because of her work as a journalist, Russia continues to forbid her from entering the country. Last week, she opened the annual Ambassadors Conference in Berlin at the invitation of German Foreign Minister Heiko Maas.

Freeland: Canada is a strong supporter of the Universal Declaration of Human Rights. Every single person in the world has unalienable and fundamental rights. Canadians - like Germans - are very lucky to live in an open society. We feel a strong moral obligation to speak up about people whose rights are being violated in other places.

SPIEGEL ONLINE: How long can you withstand the diplomatic and economic pressure coming from Riyadh?

Freeland: Canada believes that engagement is the most effective path for productive relations with other countries. For Canada, this engagement will always include speaking up for human rights. Sometimes, we have been criticized by those who say that it is inappropriate to comment about human rights issues in other countries and that we need to be concerned about our own failings. That is right. In Canada, for example, the treatment of indigenous people is far from being solved. We have no problem with being criticized for that. Likewise, if we see a human rights problem in another country, we will take the liberty to speak up about it.

SPIEGEL ONLINE: How worried are you by the fact that an increasing number of Canadians are supporting the conservative politician Doug Ford, the so-called "Canadian Trump?"

Freeland: Mr. Ford won the elections to become premier of my province. In the two meetings I have had with him since the elections, he has been supportive of our government's approach to the NAFTA negotiations with the U.S. and Mexico. Nevertheless, I am a liberal and Mr. Ford is not, so there are issues on which we disagree. One is climate change. My government thinks that there should be a cost on pollution. Another point is my strong belief in an open society, openness to both trade and immigrants. Diversity is a strength. One of the most worrying things we are seeing right now is the argument that diverse societies are impossible and that people can only live in their own ethnic tribes.

SPIEGEL ONLINE: In Canada, rumors have been making the rounds that you might one day succeed Prime Minister Justin Trudeau.

Freeland: (laughs) Well, I am older than he is, and he is fantastic. 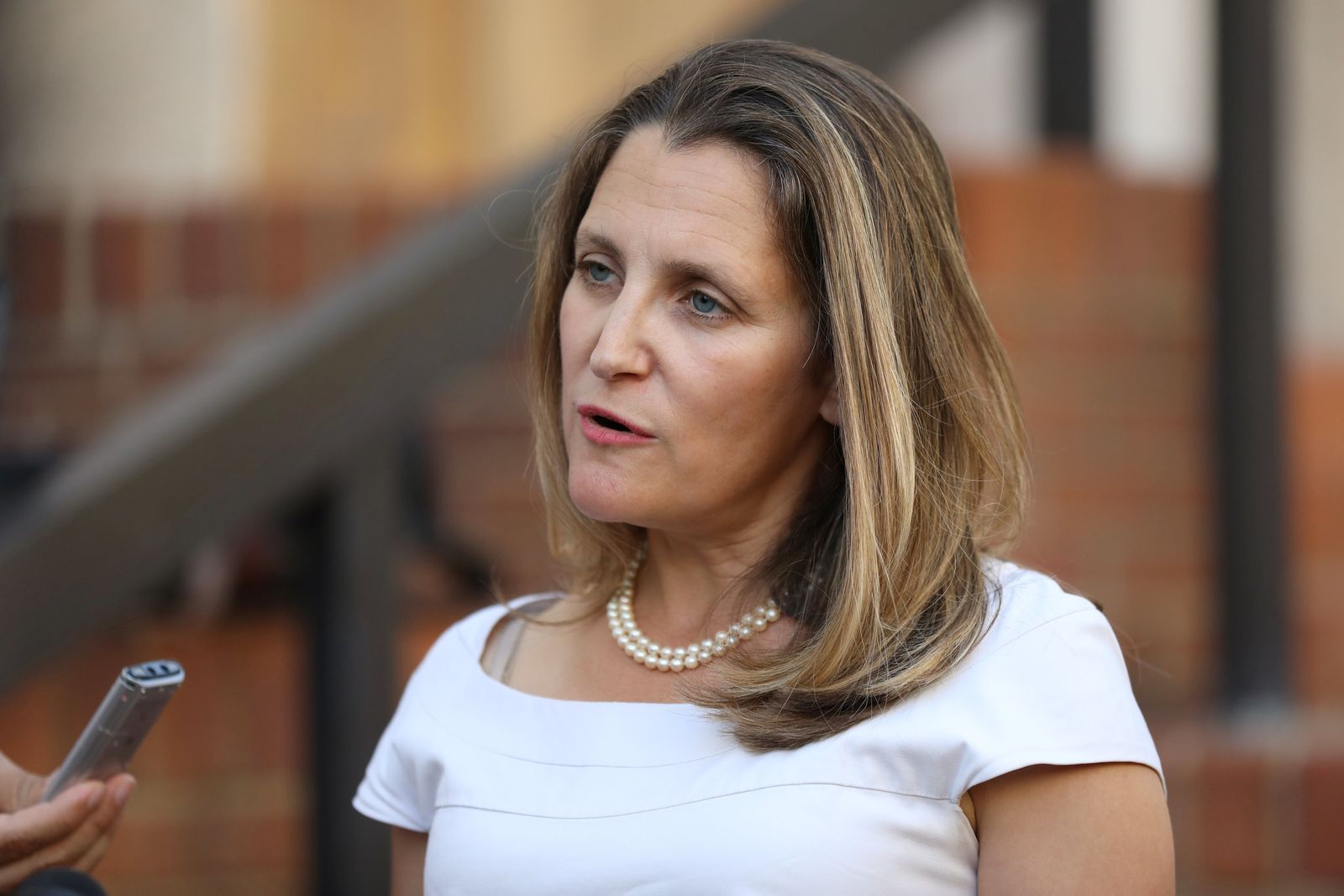