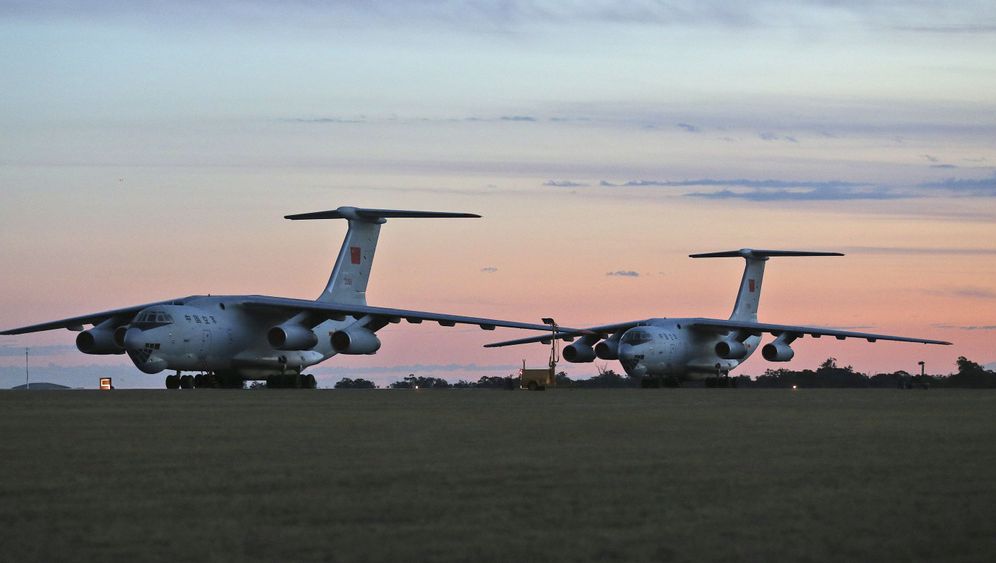 Photo Gallery: The Search for MH370

Palmer: There's no evidence at all for terrorism. All the information that has been disclosed publically so far is consistent with a purely mechanical cause.

SPIEGEL: Are those pilots in your view heroes or failures?

Palmer: I believe they had a major malfunction and tried to deal with it. And they were unable to.

SPIEGEL: The copilot says: "All right, good night" to Air Traffic Control. Just two minutes later the transponder is switched off along with other equipment and the airplane basically goes into cloak mode. Could this not be an indication for a sinister plot from within the cockpit?

Palmer: Not necessarily. There might have been an electrical fire that took out the transponder, the radios and even more equipment.

SPIEGEL: Of which there was no indication at all just two minutes earlier?

Palmer: Maybe the problem was unfolding, but the pilots hadn't realized it yet. Things can happen quickly. There could have been a major short circuit in the system. A fire in the electronics equipment bay just below the cockpit would explain the radio loss. Of course, we don't know what initiated the fire -- a meteor? A bomb? Bad wiring?

SPIEGEL: Then they changed their heading, all without declaring an emergency.

Palmer: In an emergency, pilots will try to aviate, navigate and communicate. In exactly that order. They might have been too busy dealing with the fire for any communication attempt. Just 40 minutes into the flight, they probably decided to go back to Kuala Lumpur which makes perfect sense.

SPIEGEL: Apparently, they changed their heading a second time -- in a northwesterly direction.

Palmer: That heading is consistent with an attempt to land at a diversionary airport on Pulau Lankawi, which has a very long runway and no terrain in the way. This would be a sensible course of action, especially at night with severely compromised equipment.

SPIEGEL: What is a fire like in the cockpit?

Palmer: It's the most critical emergency we can have. Think of Swissair Flight 111, which went down over Nova Scotia on Sept. 2, 1998. This was an MD-11 that had a fire in the overhead panel in the cockpit. The fire was due to improper wiring in the in-flight entertainment system. The crew did what they could, but within 15 minutes after noticing smoke, they had crashed. The cockpit literally turned into an oven, melting everything.

SPIEGEL: MH370 never landed on Pulau Langkawi. Instead it went up to 45,000 feet, well above its certified maximum. A little later, it plunged down to 23,000 feet. What does that tell you?

Palmer: Some experts have said that the captain might have tried a last resort attempt to extinguish the fire. That's why he climbed into thin air. This theory shouldn't be discounted. But my best guess is this: Everyone on the flight deck was incapacitated by now. The autopilot was off. The airplane was just flying on its own.

SPIEGEL: How is that possible?

Palmer: The 777 is a fly-by-wire plane. There are flight-control computers within the fuselage that will stabilize the airplane whatever it does. It will try to maintain the speed that the captain has selected. All by itself, it will pitch the nose down if the speed falls. It will pitch the nose up if it gets too fast. These computers will also make sure there is no banking in excess of 35 degrees.

SPIEGEL: So it is possible everything failed but the flight control computer?

Palmer: There are four sets of flight control computers on the 777, the so called "actuator control electronics." If just one is working, it will control the airplane -- it's wandering around, reacting to turbulence, wind, temperature changes. I wouldn't expect it to go as high as 45,000 feet, but I'm not surprised either.

SPIEGEL: So you have a ghost plane that flies itself to the southern part of the Indian Ocean …

Palmer: Exactly. Until the fuel runs out. We can't know whether the passengers witnessed all this or if they had lost consciousness as well.

SPIEGEL: How does an airplane crash without fuel? Does it go down smoothly like a glider or will it hit the water hard at a steep angle?

Palmer: It will probably seem like a very normal descent, as normal descents are made with idle power, but it would be too steep and fast for a smooth water landing.

SPIEGEL: Will there ever be proof for your theory?

Palmer: Only if they find the airplane, the voice- and the data recorders. Otherwise, this will go down as aviation's biggest mystery since the disappearance of Amelia Earhart in 1937 over the Pacific.