DER SPIEGEL: Mr. Kalın, Mustafa Kemal Atatürk, the founder of the modern Turkish state, once issued the doctrine: "Peace at home, peace in the world.” In the early 2010s, Turkey’s slogan was "zero problems with the neighbors.” But Turkey has had many problems with its neighbors in recent years and seems isolated. Do you see things similarly?

Ibrahim Kalın: No. We are living here geographically in a location where many cultures and geopolitical interests meet. You cannot feel alone in such a situation, and definitely not isolated. We are engaged in Europe, in the Balkans and the Mediterranean. Moreover, President Recep Tayyip Erdoğan is probably the head of state who has made the most visits to Africa. Of course, there are also problems: The fact that the EU accession process isn’t progressing for us has led to great frustration.

Kalın, 50, has been spokesman and chief foreign policy advisor to Turkish President Recep Tayyip Erdoğan since 2014. The historian and expert on Islamic philosophy studied in Malaysia and Washington, where he also earned his doctorate. The conversation with DER SPIEGEL took place in his Istanbul office in the historic Dolmabahçe Palace – the former residence of the sultans, located on the Bosporus, where state founder Mustafa Kemal Atatürk died. The latter’s photo hangs behind the desk in Kalın’s simply furnished office, next to that of President Erdoğan. Beyond his political career, Kalın is known for his passionate playing of the Bağlama, the Turkish stringed instrument.

DER SPIEGEL: One could also say that there are serious tensions with the EU.

Kalın: One could, yes. But we can overcome those. Those are disagreements of opinion among allies. We have also had tension-filled phases with Germany, but we have moved beyond them. We have cooperated with the U.S. in the fight against terrorism – though sometimes Turkey’s needs were not considered. For example, when the Americans in Syria supported the PKK’s local offshoot, the YPG. We cannot accept that.

DER SPIEGEL: You had a good relationship with Donald Trump. His successor, Joe Biden, called your president an autocrat. What is your view of him?

Kalın: That was an unfortunate statement during the election campaign. President Biden later set the record straight during a personal meeting. The Americans simply don’t understand that Turkey sees the Syrian PKK offshoot as a national threat. A further issue of conflict between us is the Gülen organization (which the Turkish government has accused of playing a leading role in organizing the attempted coup of 2016) is free to operate in the U.S. That raises questions and burdens the relationship between allies.

DER SPIEGEL: In recent years, Turkey has repeatedly led partners to question whether it still stands by NATO – by purchasing Russian air defense systems, for example.

The article you are reading originally appeared in German in issue 40/2021 (October 2nd, 2021) of DER SPIEGEL.

Kalın: We are a strong member of NATO and are fully and completely committed to it. We have often taken part in its missions. We want to see NATO as a strong alliance. Problems among members should not weaken it.

DER SPIEGEL: There is a debate in Europe about whether it should become more independent of America. How do you see that?

Kalın: America is an important actor. But I criticize the Europeans for looking first towards Washington when they make many decisions. It doesn’t show political leadership. Nobody is saying that the Europeans should leave America out of their decisions. But Europe is a strong continent – politically and economically very significant. It should be more influential and independent when it comes to geostrategic decisions – but instead it remains in the shadow of the U.S.

DER SPIEGEL: The U.S. has now established AUKUS, an Indo-pacific alliance with the UK and Australia. Where do you see Turkey in the West’s competition with China?

Kalın: We would prefer it if this competition remains constructive. If it becomes destructive, third parties suffer: the Asian countries, but also Europe. Instead of choosing a side, we should establish a win-win situation. We need to cooperate, especially in pandemic times.

DER SPIEGEL: Your government has recently grown closer to countries with which it has long been in conflict: Egypt, the United Arab Emirates, Israel, Saudi Arabia. Your conflict with Greece is also calming down. Is it a return to the "zero problems” motto?

Kalın: Of course. One can also have relationships without agreeing on every subject. After all, we have common interests. But why should we live in unrelenting tension with Saudi Arabia?

A Turkish-Russian military patrol in Syria

DER SPIEGEL: The 2018 murder of journalist Jamal Khashoggi in the Saudi consulate in Istanbul could be one reason.

Kalın: Sure, that was the reason for the conflict. Something quite terrible happened. But Saudi Arabia has worked through the matter legally. Now we need to concentrate on where we can work together.

DER SPIEGEL: You have been in conflict with Egypt since 2013, when a military coup overthrew the Muslim Brotherhood regime.

Kalın: Yes, we had conflicts with Egypt – but it is an important country in the region, with which we have historic and cultural ties, also through trade. The same is true for the other countries you named. When our relationships normalize, the entire region benefits.

DER SPIEGEL: What role do you want to have in Afghanistan in the future? Turkey has taken part in the NATO mission since 2001. And now, after the West’s withdrawal, your country has left its embassy personnel there.

Kalın: We want to help the Afghan leadership get the airport operating again. We said that from the start. The technical consultations on this have already begun, together with the Qataris. But that is frustrating, because the new leadership is not capable of making quick decisions. Everything is taken to the Shura Council, the highest governing body. And they currently need to make a lot of decisions simultaneously.

Ibrahim Kalın is one of President Erdoğan's closest confidants.

Kalın: Right now, we are concentrating on enabling the new Afghan leadership to be able to stand on its own two feet instead of formally recognizing it. We talk to them about problems that already existed before the transfer of power – the economic situation, security problems, border security, migration. The way the Taliban came to power has made everything more difficult. And the way the Americans left has created great chaos. We expect that the Taliban will establish a more inclusive government. The recently presented government has not fulfilled the expectations of the international community. But we need to be realistic in our expectations.

DER SPIEGEL: Do you anticipate large movements of refugees from Afghanistan?

Kalın: It’s not comparable to the large movement of refugees from Syria. But that can change if the economy in Afghanistan collapses. Our country has already gone far beyond its capacities. We have already taken in about 4 million Syrians. We are doing everything to secure our border, are working with Iranian border security, have built a wall, electronic surveillance systems, installed cameras, built observation posts. Now the international community, the U.S., the UN, need to act. We cannot take in any more people.

DER SPIEGEL: Is there a past decision you regret? In Syria, Turkey initially backed the insurgents offensively against Bashar al-Assad, then later concentrated on the fight against the YPG.

Kalın: Foreign policy is not static. Every time has its decisions, they are always made under the conditions at the time. But sometimes those you set out with leave you on your own halfway through. Until all of Syria got out of control and thousands of people died, we were in favor of dialogue with the regime – but it didn’t want to listen and continued with its attacks on its own people. At the time, there was a conference called Friends of Syria in Tunis. There, Hillary Clinton said that America would support the opposition. Shortly thereafter, the Friends of Syria dispersed – and the opposition and the refugees were left on their own. The regime was able to commit all kinds of crimes. Barack Obama drew a red line that evaporated.

"We cannot take in any more people."

DER SPIEGEL: And now Turkish soldiers are stationed in Idlib. What is your goal, especially since the Syrian regime is supported by one of your closest partners, Russia?

Kalın: Ending the war in Syria is the task of the international community. Assad has lost all legitimacy, even if Russia and Iran see it differently. At the same time, we must work with them to provide humanitarian aid and prevent fighting. The UN’s Syria talks in Geneva have not produced any results.

DER SPIEGEL: What exactly do you expect from the Europeans when it comes to Syria?

Kalın: You can’t always cry "oh no” and look at the region when refugees are on the way – and then pull back into your own corner when the situation is relatively under control. Much more pressure needs to be applied to Assad, the opposition needs to be supported to a far greater degree. Not so that no refugees come "to us,” but because this is about people who need help. They need to see that the world hasn’t turned its back on them.

DER SPIEGEL: Do you expect the West to send in troops to protect the opposition in Idlib?

Kalın: No, it’s not about that. We suggested a security zone in 2015, and in 2016 and 2017. If there had been a no-fly zone then, not as many people would have been forced to leave Syria. That was a missed opportunity. Several of our European friends criticize us for having soldiers in Syria. But it should please them. We are keeping the people in the areas we control. Simply because we are there, 2.5 million people in those areas are not fleeing. Our friends in the West act as if we are an occupying power. We are not targeting Syrian soil, but we were forced to take this step – because of our own security and the security of the Syrians on the ground. Instead of getting thanks we are getting embargoes. Why? Because we are harming the PKK’s presence there.

DER SPIEGEL: The accusation is that your deployment in northern Syria is in violation of international law.

Kalın: The one breaking international law is Assad. And the PKK. Have these two problems been solved? Why is attention now turning to Turkey? For us, it is about our right to self-defense. If Russia and the U.S. have been granted the right to go into Syria, then we also have that right. 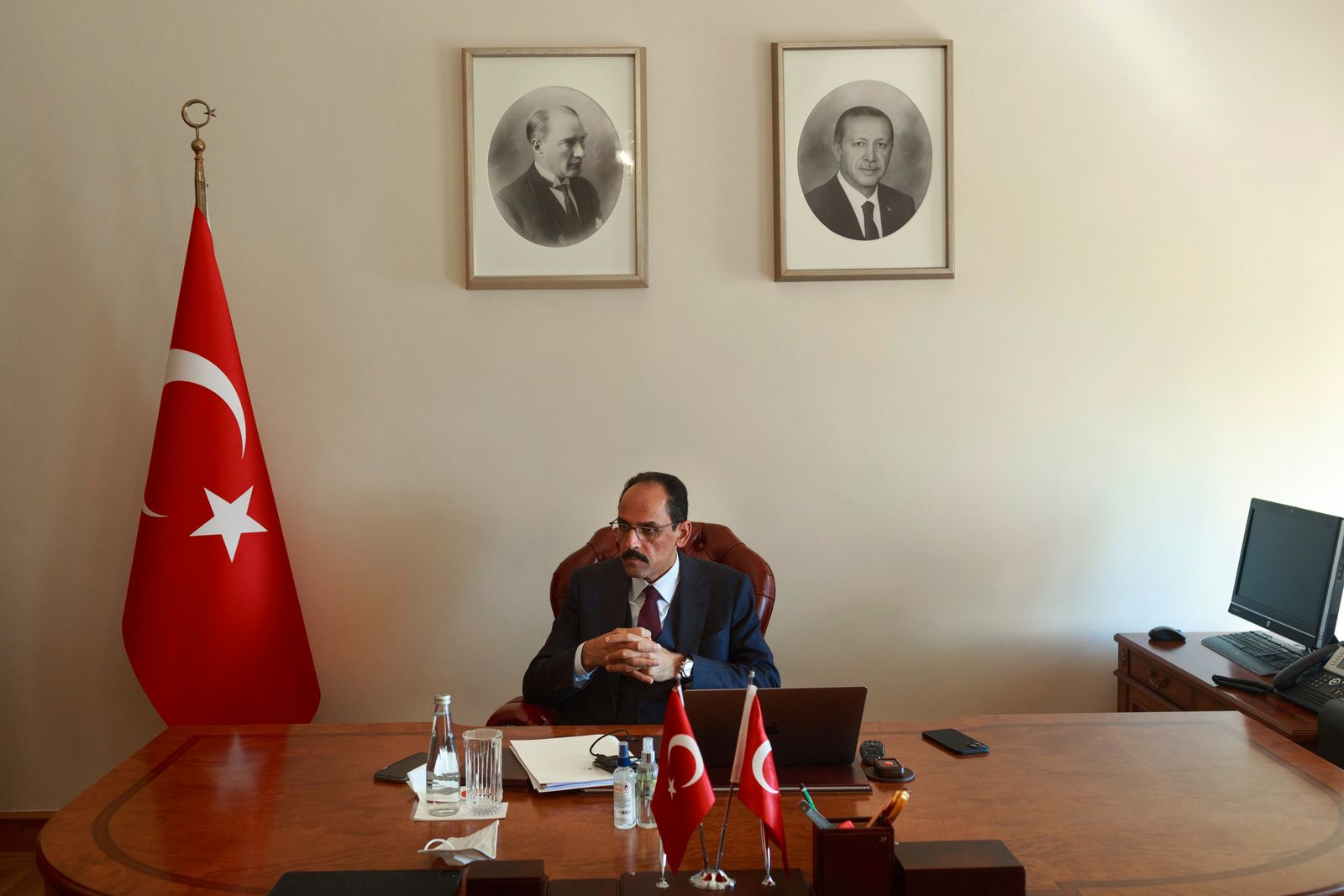 Ibrahim Kalın in his office in Istanbul 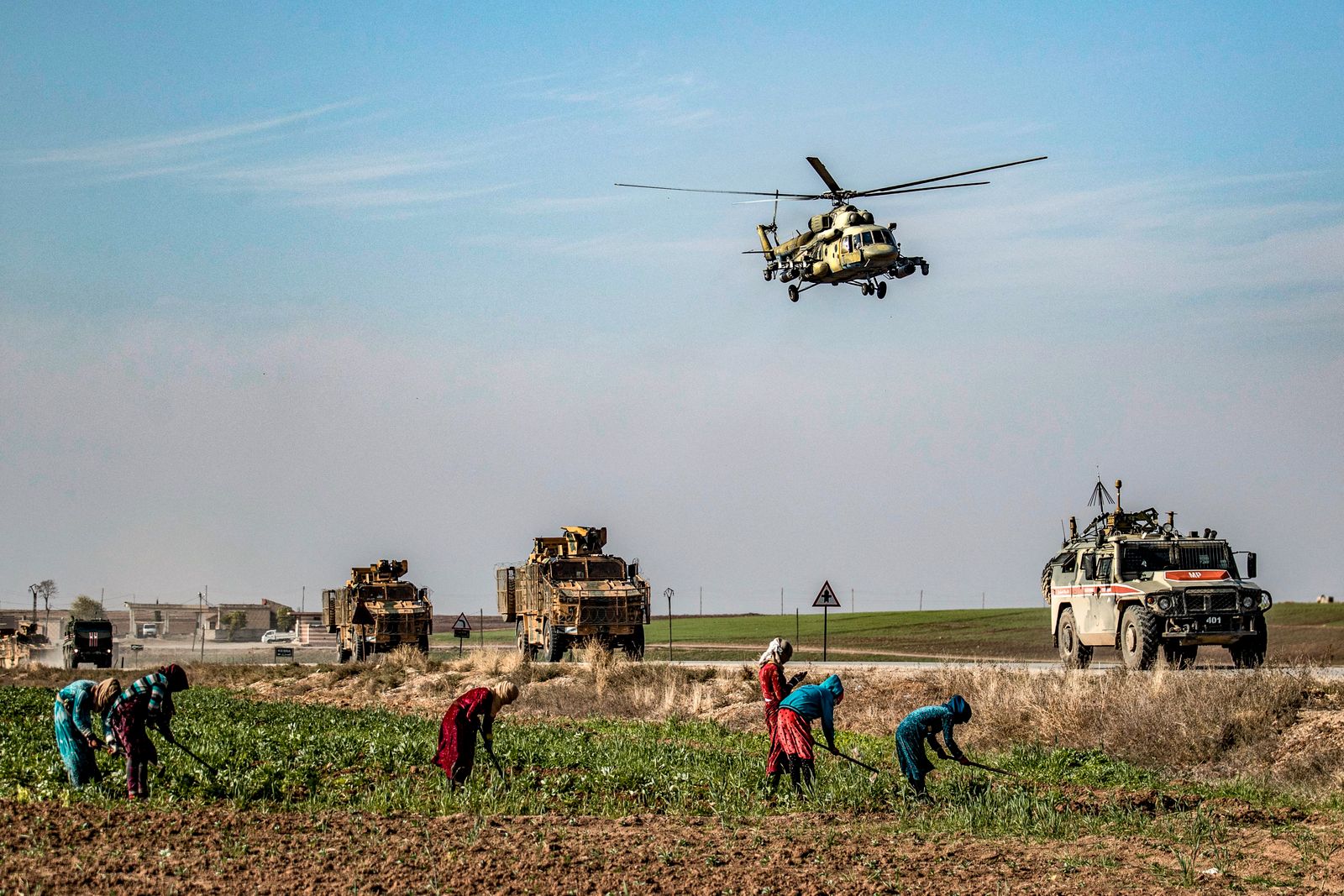 A Turkish-Russian military patrol in Syria 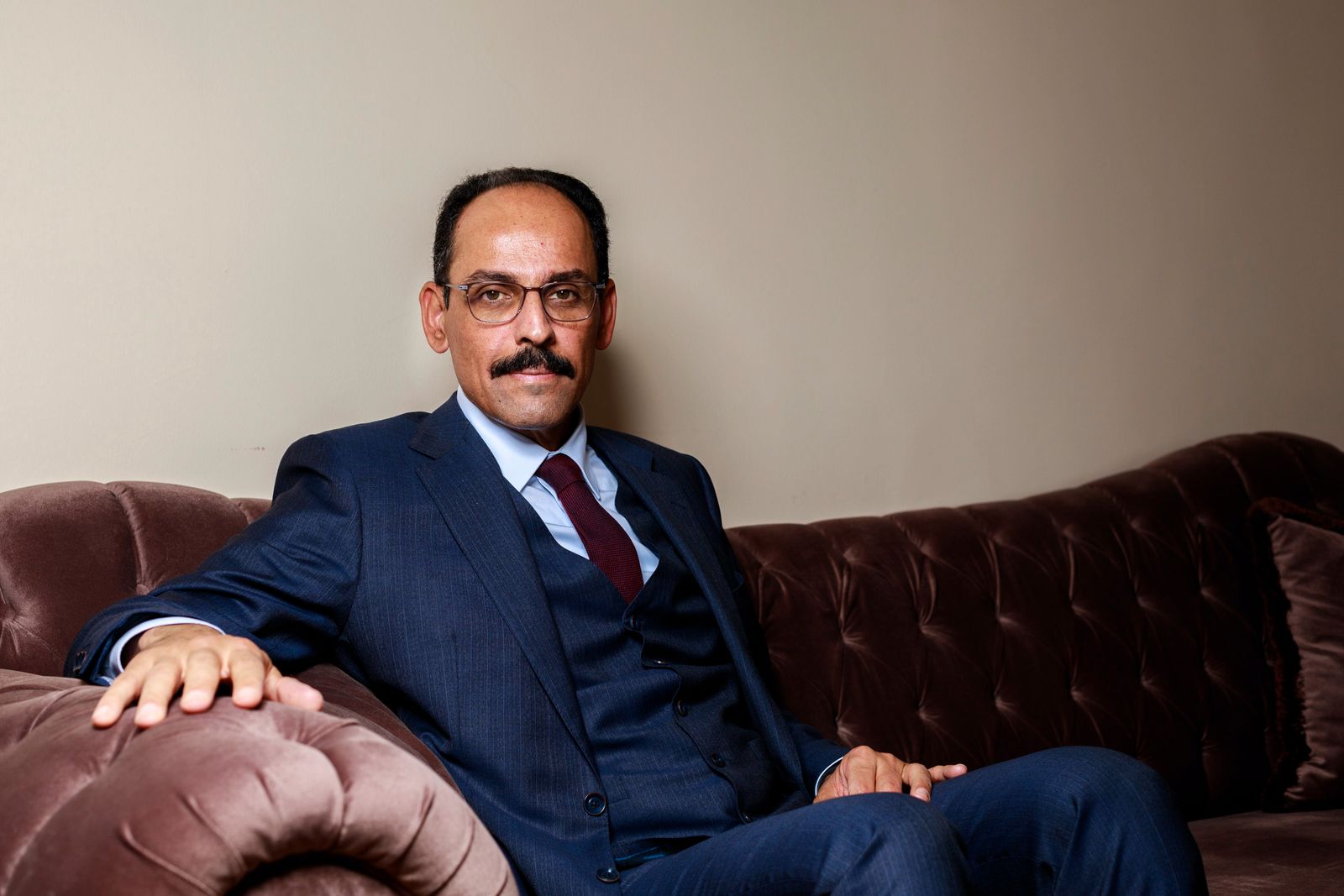 Ibrahim Kalın is one of President Erdoğan's closest confidants.