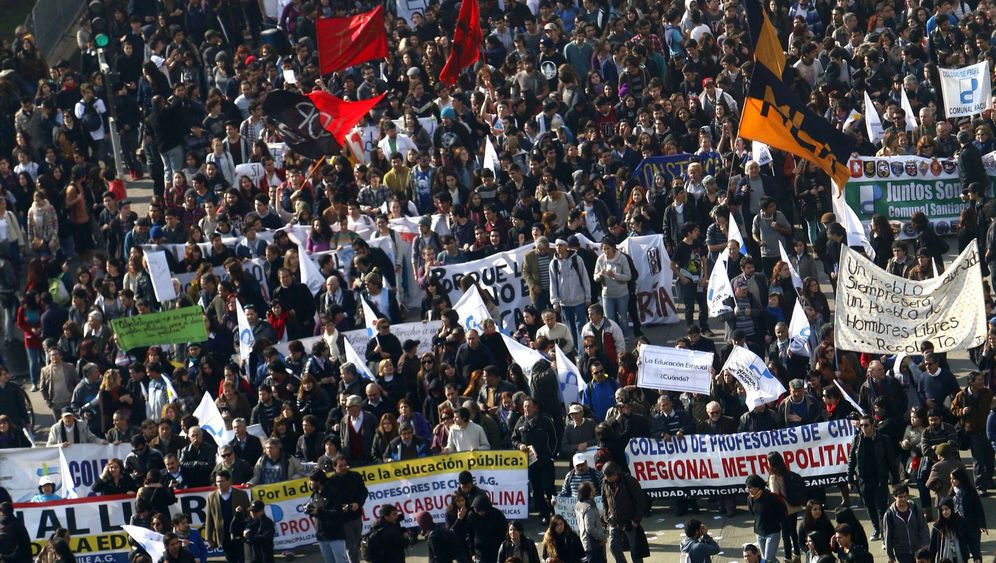 Last year, Michelle Bachelet, 63, was elected to be president of Chile for the second time. When the Socialist politician became the country's first female president eight years ago, she symbolized the country's transformation after the end of Augusto Pinochet's military dictatorship in 1990.

When she left office in 2010, she still had a popularity rating of over 80 percent. But she couldn't stand for re-elected because Chilean election law prohibits a president from serving two consecutive terms. A pediatrician by vocation, Bachelet is a single mother and is the daughter of Alberto Bachelet Martínez. Her father remained loyal to Salvador Allende, the Socialist president murdered after the 1972 military putsch. Bachelet would himself later die in prison following repeated torture.

During her first term as president, Bachelet succeeded in democratizing the country's military forces and provided support to victims of the dictatorship. At the end of 2013, Bachelet got re-elected to succeed the right-leaning politician Sebastián Piñera as president. Since then, both the political and economic climate in Chile has deteriorated. President Bachelet has nonetheless pledged to create greater social justice in free market Chile. She says she wants to provide all Chileans with access to education, health care and pensions. But her reform plans could face an uphill battle given the current economic stagnation. Her electoral coalition, known as Nueva Mayoría (New Majority), runs the gamut from the Christian Democratic Party to the Communists and represents the largest group in parliament. Still, it is insufficient to push through a new constitution, as has been proposed by Bachelet.

SPIEGEL interviewed President Bachelet in the run-up to her Oct. 27 state visit to Germany, Chile's "most important European trading partner." Her itinerary includes a meeting with Chancellor Angela Merkel.

SPIEGEL: Madame President, what condition was your country in when you began your second term in March 2014?

Bachelet: Chile has changed. The people have become more mature and they are more conscious of their rights. They want to participate and have a say about things such as if and where a power plant can be built.

SPIEGEL: Chile succeeded in transitioning from a military dictatorship to democracy. And yet there are still vestiges of the dictatorship. How do you plan to get rid of them?

Bachelet: We need to reform our constitution. The current one was written and passed in 1980 during the dictatorship. Some changes were made after the return of democracy, but its origins remain illegitimate. Instead of continuing to make fixes here and there, we need to undertake fundamental changes to our constitution to make it reflect the reality of our democratic society.

SPIEGEL: Could you cite an example?

Bachelet: We are currently changing the election law. Under the so-called binominal election right introduced by Pinochet, electoral success was only possible for the two largest political blocks, with small parties getting excluded entirely. This is of particular importance to young voters who desire other candidates. In addition, we will recommend that parliament move to decriminalize abortion in cases of rape or when there is a threat to the survival of the mother or the fetus. We also want to recognize the cohabitation of couples, regardless of their sexual orientation. Currently, that only exists for marriages between a man and a woman.

SPIEGEL: You have been in office for seven months, but you have yet to begin work on a new constitution. Nor do you have the two-thirds majority in parliament you would need to push it through. Is the plan in any way realistic?

Bachelet: I am not going to push ahead with the new constitution until next year. We need to have a broad debate so that the new constitution is representative of everyone. I am convinced that it cannot just be developed by an expert group. First, people at all levels will be given an opportunity to provide input. They should be allowed to express their opinions about the kind of society they would like to live in. How, for example, should the state deal with the business community or the environment? That's the kind of open process I would like to see. The issue at hand here is finding unity on the greater rules. Afterwards, a text will be developed and presented to parliament.

SPIEGEL: Fewer than half of those eligible to vote participated in the second round of the presidential election. Twenty five years after the end of the dicatorship, are the people of Chile growing weary of democracy?

Bachelet: The challenge is for us to reinvigorate the relationship with the people and to give state institutions new legitimacy. But this is also a universal phenomenon. There's also disenchantment with politics in Europe.

SPIEGEL: You're a Socialist, but during your first term, you made few changes to Pinochet's neo-liberal economic path. Are you going to change course now?

Bachelet: Even then, I made an effort to ensure social safeguards. But our economy has to grow -- and Chile, with a population of 17 million, cannot depend entirely on its domestic market. Which is why the decision to focus on exports, made at the beginning of the democratic era, was the correct one. We are continuing to do so. For a long time, Chile has been successful in combating poverty. But now we must focus more on fighting inequality.

SPIEGEL: How do you intend to do so?

Bachelet: I have embarked on a list of reforms. The first step is tax reform to create more revenues for social expenditures. Tax evasion will be combatted more effectively. Those who earn more will have to pay more. That will improve solidarity in our society.

SPIEGEL: Experts have warned that economic growth could collapse by half this year. The price of copper has dropped, which hurts Chile in particular. Is now really the time for tax hikes?

Bachelet: In the eyes of many business leaders, there is never an opportune moment for tax reform. Yes, the economy is losing momentum, but that is not because a handful of people are losing their privileges. Slow growth did not first begin during my term in office; the market downturn is making itself felt around the world. My government has responded with an agenda aimed at raising productivity. We are also investing substantially in infrastructure -- the plan calls for €20.5 billion ($26.3 billion) by 2021.

SPIEGEL: Since 2011, university students in Chile have been holding protests to demand social reform and free access to education. What has your response been?

Bachelet: All boys and girls should have the opportunity to receive a high-quality education, no matter what part of the country they live in and irrespective of whether their parents are rich or poor. It is the state's duty to make sufficient money available for the establishment of good public schools. A well-educated youth is crucial so that Chile can continue to grow economically.

SPIEGEL: Still, many students don't believe your reforms go far enough and have resumed protesting. In addition, there have been almost 30 bomb attacks this year, the most recent one even resulting in several injuries. Anarchist groups have claimed responsibility. Does the bombing campaign represent a serious threat?

Bachelet: We have seen bomb detonations for years, for example those targeting cash machines. They have rarely had a political motive behind them, however, and were mostly criminal in nature. Others were carried out by opponents to the system who sought to attract attention to themselves, but they represent a tiny minority in Chile. Still, we are taking the most recent attacks very seriously. Those who place bombs near subway stops or restaurants put human lives at risk. That is terrorism. We have placed all necessary means at the disposal of public prosecutors to investigate this type of crime and are in the process of introducing an anti-terror law in parliament.

SPIEGEL: How can the anger of many young people be explained? Does it have to do with the fact that many of them are too young to have experienced the dictatorship?

Bachelet: Our reforms will fundamentally change the lives of many young people. There are many young parliamentarians, district councilors and mayors in my coalition and in other parties. They will hopefully be able to re-instill trust in politics among those in their age group.

SPIEGEL: On Monday, you are coming to Germany for a state visit. When you meet with Chancellor Angela Merkel, will you speak about your common experiences in East Germany, where you both worked as natural scientists?

Bachelet: I know the German chancellor from previous meetings during my first term and admire her strength of leadership. But our common experiences from East Germany have never been a topic of conversation. We spoke about foreign policy and about how we can make progress in development cooperation.

SPIEGEL: Are there new joint proposals?

Bachelet: Renewable energies, mining and infrastructure improvements are our largest joint projects. Germany is our most important European trading partner. But we also want to learn from Germany how its model for vocational training works. We badly need it in Chile.

SPIEGEL: Latin America has been predominantly leftist in recent years, but conservatives are on the rise in many countries. Do you think you could soon be the last Socialist in office in the region?

Bachelet: On such a large and diverse continent, political change is natural. We are all united in the fight against poverty and inequality. The fact that we are making progress on gender equality can be seen by the fact that in Latin America, we have more women in the highest state offices than you Europeans.