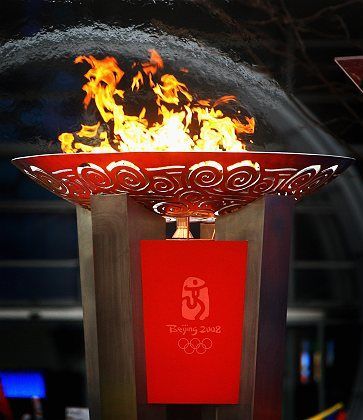 China's human rights record has been a focus in the run up to the Olympic Games.

China's government has come under massive international criticism over its human rights record in the run-up up to the Olympic Games in Beijing this summer. China wanted to use the Olympics to show the world a new, modern face but the plan seems to be backfiring as Western countries sharply criticize China's handling of protests in Tibet last month. Some have even openly considered boycotting the Games.

SPIEGEL spoke to prominent human rights activist Liu Xiaobo about the current situation of human rights in China and the prospects for change.

SPIEGEL: A few months before the Olympic Games, criticism is mounting against the Chinese government -- both for its activity in Tibet and the fact that it throws human rights activists such as Hu Jia in jail. Did Beijing underestimate the consequences of hosting the Games?

Liu: I don't think so. The leadership knew that the conviction of Hu Jia would ruffle feathers. But it wasn't reckoning with the protests in Tibet. Now the entire world has its eyes on China. The response of European countries has been especially tough, much tougher than the US response. That surprised Beijing.

SPIEGEL: Why did Beijing want to host the Olympics in the first place?

Liu: The Party leader at the time, Jiang Zemin, wanted to show the world China's new status. And in winning the bid, the leaders could show the people how strong the government was. Plus, the leadership wanted to use the Games to strengthen nationalist sentiment. After June 4, 1989

Liu: its legitimacy was seriously weakened. The party was desperate to boost patriotism.

SPIEGEL: The Communist Party continues to claim that the Games have nothing to do with politics.

Liu: For the party, the Beijing Games are the biggest political happening of 2008. Everything revolves around them. This will be a huge celebration for the President Hu Jintao and the Premier Wen Jiabao.

SPIEGEL: In order to win the bid, Communist party functionaries promised more democracy. Did you believe them at the time?

Liu: No. I've heard the government say many nice things. But it did make some gestures, like writing human rights protection into the constitution -- that surprised me. And it improved the conditions for foreign journalists: It used to be impossible for you to meet with me personally. But there still hasn't been a real improvement in the human rights situation.

SPEIGEL: Does the government respond to pressure form the outside world?

Liu: Yes. If it didn't, the human rights situation would be much worse.

SPIEGEL: What would happen if the Games were boycotted?

Liu: That wouldn't be a good way to punish China. If the Games fail, human rights will suffer. The government would stop paying any attention to the rest of the world. I personally think: We want the Games and we want human rights to be respected.

SPIEGEL: What are you expecting in the coming months?

Liu: As soon as the torch reaches Western Europe, there will be protests. I think the government will respond to foreign pressure and criticism to diminish both. I hope they will decide to release Hu Jia prematurely, for health reasons.

SPIEGEL: What will China look like after the Games? More liberal? More open?

Liu: It will all progress very slowly. But the demands for freedom -- on the part of ordinary people but also party members -- won't be as easy to contain.

SPIEGEL: Do you think there could be a Chinese Gorbachev one day?

Liu: I can't imagine that. But the party will gradually open up. For instance, it has already set a time limit for political reforms in Hong Kong. And in four years time, there won't be a strongman to name the General Secretary at the party congress. That means that the various factions will have to develop better rules for naming their leader. But there won't be a timeline for political reform.