SPIEGEL ONLINE: Mr. Banga, how is the security situation for the people of Rutshuru?

Jules Simpeze Banga: We can't guarantee security 100 percent. We're searching houses and neutralizing the enemy -- they're hiding among the civilians, the FDLR, the government's troops and the Mai Mai. But things are safer now. 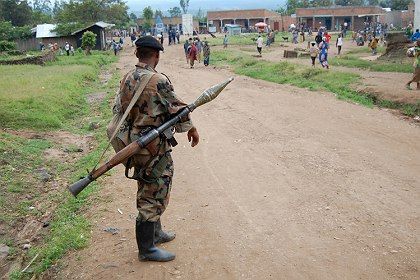 SPIEGEL ONLINE: You've been appointed by the rebels as the area's highest authority. What tasks lie ahead of you?

Banga: Once we've taken care of all the people carrying arms, we need to see about clean water. Cholera has broken out. The people are hungry, because they can't work their fields. We're working together with the aid organizations that have returned.

SPIEGEL ONLINE: In essence, you're replacing the Congolese government.

Banga: The government wasn't able to take hold here. Now the CNDP (editor's note: National Congress for the Defense of the People) is governing the region. But the area still belongs to the Congolese state, even if we don't have contact with the capital Kinshasa. We're calling for a meeting with the government.

SPIEGEL ONLINE: What are your demands for the government in Kinshasa?

Banga: We want direct negotiations. There are many foreign rebel groups in eastern Congo that are accepted by the government. Why are they fighting only us? That's unjust. We demand that Congolese refugees be allowed to return from neighboring countries. That's not possible as long as the government continues to work together with the FDLR (editor's note: the Hutu militia responsible for the 1994 genocide in Rwanda). If they don't accept that in the capital, then we will bring the war all the way to Kinshasa.

SPIEGEL ONLINE: How long do you think you can hold your position?

Banga: I can't name a date. There are rebel groups that have held an area under their control for several years. War doesn't follow mathematical rules. If the people accept us, then we'll be here 20 or 25 years.

'We're Looking after the People'

SPIEGEL ONLINE: So you argue that the people in Rutshuru are doing better under your authority than under the government?

Banga: The government's troops have maltreated the people, bombed them and exploited them. People died without anyone taking notice. We're looking after the people. Now at least they can sleep easily and safely. They're grateful to us for that.

SPIEGEL ONLINE: And how are matters with the refugees?

Banga: The people in Rutshuru share their bananas with them. That doesn't satisfy hunger, of course, but we're trying to improve the situation together with the aid organizations. At least we're making an effort -- unlike the government, which just let people die for years. We've opened the trade roads with Uganda again, after they were closed for three months.

SPIEGEL ONLINE: Why did you capture Rutshuru? There are no mines here to make profits.

Banga: It's not about gold, coltan ore or other resources. The international community has invested billions in our country. But nothing has reached the people here in the east. The ones who profited from the money, they didn't lift a finger.

'We Want to Liberate the Entire Country'

SPIEGEL ONLINE: Where are you obtaining your resources and money to pay for weapons and soldiers?

Banga: Did the government pay its soldiers? They went looting through the villages. Now we collect a tax from the people and use that to pay the administration. It's always had to get by with little money. Even MONUC (UN Mission in DR Congo) admits that we, as rebels, are more disciplined and don't rape.

SPIEGEL ONLINE: Is the CNDP a puppet of the Rwandan government?

Banga: Always the same story. All I can do is say clearly: We're independent. You could just as well claim the government's troops are puppets of the Western countries or of the Chinese. This is not about Hutus or Tutsis. In our unit there are Tutsis and Hutus, and in Kabila's army it's the same. I'm a Hutu, appointed by a supposedly Tutsi-dominated power. The CNDP has a national vision. We want to liberate the entire country. And if the people in Kinshasa want, we'll liberate them too.