SPIEGEL: Congressman, you visited Germany as a member of the Congressional Study Group on Germany. Do people expect too much from the United States?

Lewis: People expect us to be more of a leader when it comes to climate change and environmental protection. I agree we need to do more.

SPIEGEL: Did people expect America to change faster when Barack Obama got elected?

Lewis: It's not just the election, but his candidacy created this unbelievable wave of hope and optimism. People saw him as the embodiment of change and thought he would take us to another level. Not just American citizens but people all over the world.

SPIEGEL: Were expectations too high?

Lewis: We had these eights years of President Bush, and people saw Obama as someone who was prepared to turn the page. But the struggle for change does not just last a single term. Obama is trying to put the American people and the world community on a path to meaningful change for everybody. We need to be patient and resist frustration. He's not a dictator. He's the president. He can propose policy change and point to where we should go as a nation and as a world community. But he also has to secure the support of the American people and Congress. Some of us would like to go much faster.

SPIEGEL: Were you not surprised how quickly the political mood changed in the US?

Lewis: No. It's the first time in the history of the country that we have a black president. You have to understand that there are some people in our society that say he is not one of us. He may be down in the polls right now, but he will come back. Just like Bill Clinton came back. He's going to campaign his heart out.

SPIEGEL: Still, criticism is pretty widespread. Even some of his allies criticize him for being too elitist and for not pushing back hard enough against the populist movement represented by Glenn Beck and Sarah Palin.

Lewis: I don't see him as being elitist. He travels all over Washington and the country and gets a hamburger or a hotdog -- he meets with people where they are. When he became president, he inherited a tremendous number of problems. He inherited a miserable economy. He's trying. I see him as a hardworking, dedicated president.

SPIEGEL: How realistic was his goal to radically change the political tone in Washington? Today it seems as though it was a miscalculation.

Lewis: I don't think it was unrealistic. But there has been a deliberate, systematic effort on the part of certain forces in our country, and on the part of the other party, to destroy Obama's presidency. They do not want him to succeed. There are Members of Congress, leaders in both the Senate and the House, who are bitterly opposed to everything he does. If Obama says the sky is blue, they say "no, he's made a mistake. It's not blue."

SPIEGEL: That is exactly what he wanted changed.

Lewis: We're not even two years in the administration. It's too early to say that he's been a failure.

SPIEGEL: Some have said that it might actually be good for Obama's presidency if the Republicans were to gain a majority in either the House or the Senate in the midterm elections. That it might force the Republicans to abandon some of their most obstructionist strategies.

Lewis: I don't agree. I think if he's going to have any possibility of getting significant pieces of legislation through Congress in the next few years, he'll need a Democratic majority in both the House and the Senate.

SPIEGEL: But that's what we've had for the last two years, and it hasn't worked out well. If anything, the political tone in Washington has gotten worse.

SPIEGEL: Of course not. But the question is whether Washington would function better if the Republicans had a majority in either the Senate or the House. Would that not make them less inclined to be obstructionist?

Lewis: No. I think the Republican Party is going to the extreme. If it continues on the path it's on, it will continue to be a minority party for many years to come.

Lewis: The black masses in America love Barack Obama. Black candidates and black Members of Congress would love to have Barack Obama come and campaign for them. I wish I could get him to come down to Georgia to campaign for me, but he thinks my seat is safe. He is very popular. You cannot say anything negative about Barack Obama in the African-American community and get away with it.

SPIEGEL: Don't you feel that many expected him to deliver more than he has?

Lewis: When John F. Kennedy was campaigning, he said "when I become president, I'm going to use that pen to sign an executive order ending housing discrimination." People waited and waited. They started sending pens to the White House. But we didn't give up on President Kennedy. And little by little, he became a great champion of civil rights. So it's not time to give up on President Barack Obama. It hasn't even been two years yet. The struggle is not one that lasts just for one or two years. It is a struggle of a lifetime. Obama is setting something in motion that will pay off in the months and years to come.

SPIEGEL: Has there been any change in the African-American community brought on by his presidency?

Lewis: He has instilled a sense of hope. People need hope. I'll give you an example: I have a Congressional colleague from California who, out on the street one day, saw a young black man, as is the fashion these days, with his pants hanging down, showing his underwear. This young lady said to the man: "Pull up your pants. Son, pull up your pants for Barack Obama." The man pulled up his pants. Obama's candidacy and election said that it doesn't matter whether you're black or white, Latino, Asian American or Native American. You can be somebody. You can become president. You can become governor. You can become mayor. You can be what you want to be. That's important. There's a great sense of pride felt by many, many young people.

Lewis: I don't see a vast difference. A lot of people on the other side didn't like Bill Clinton for different reasons, and they tried to destroy him. But he hung in.

SPIEGEL: The radicalization of the right, in other words, isn't necessarily due to the US having a black president for the first time ever?

Lewis: In some quarters, it's true, people cannot get used to the idea that a person of color is president of the United States. People cannot get comfortable with the idea that so many people are coming from different parts of the world to America. In just a short time, America will be a minority majority, and that feeds some of the frustration.

SPIEGEL: Thank you very much for taking the time to speak with us. 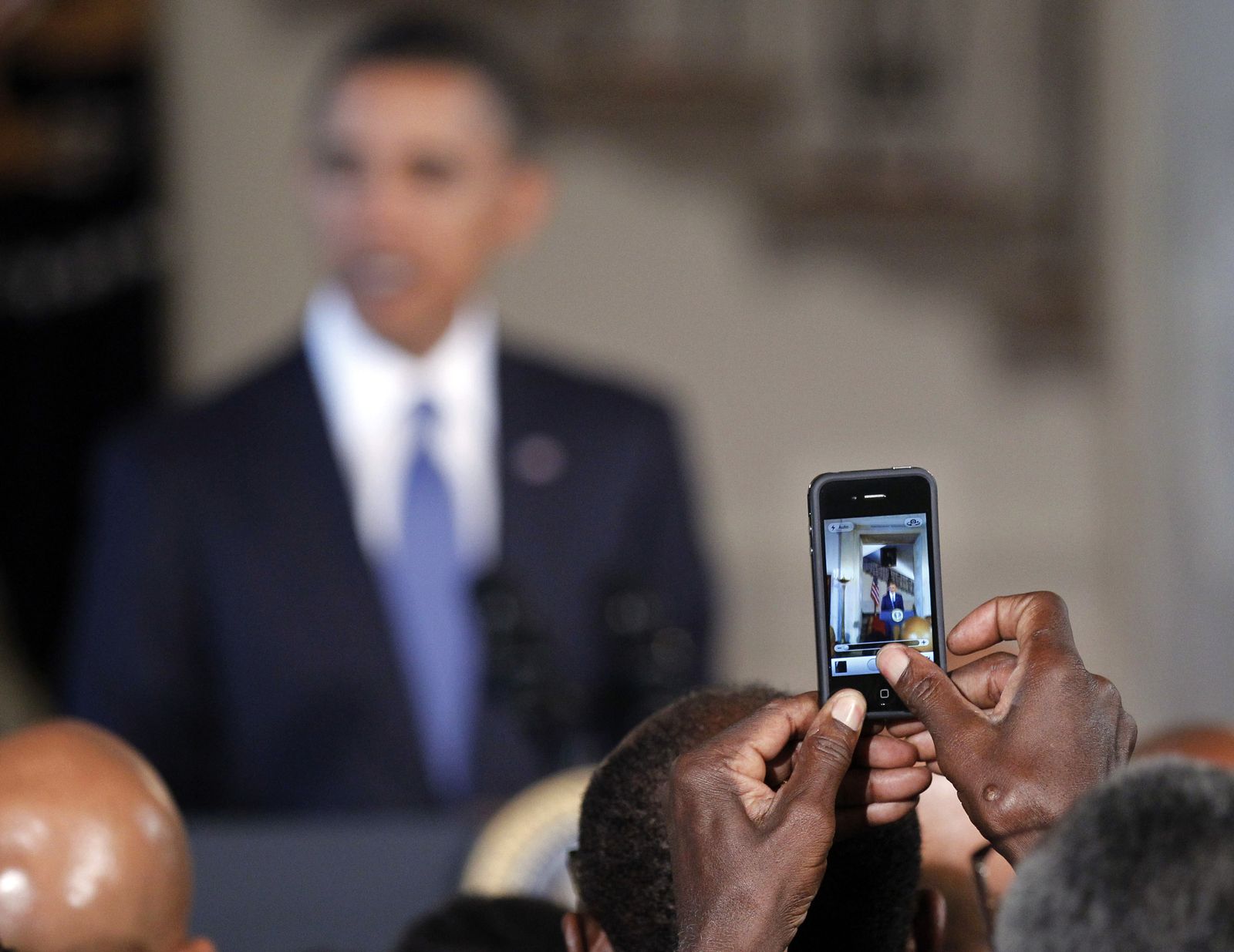 US President Barack Obama at the White House: "You cannot say anything negative about Barack Obama in the African-American community and get away with it."