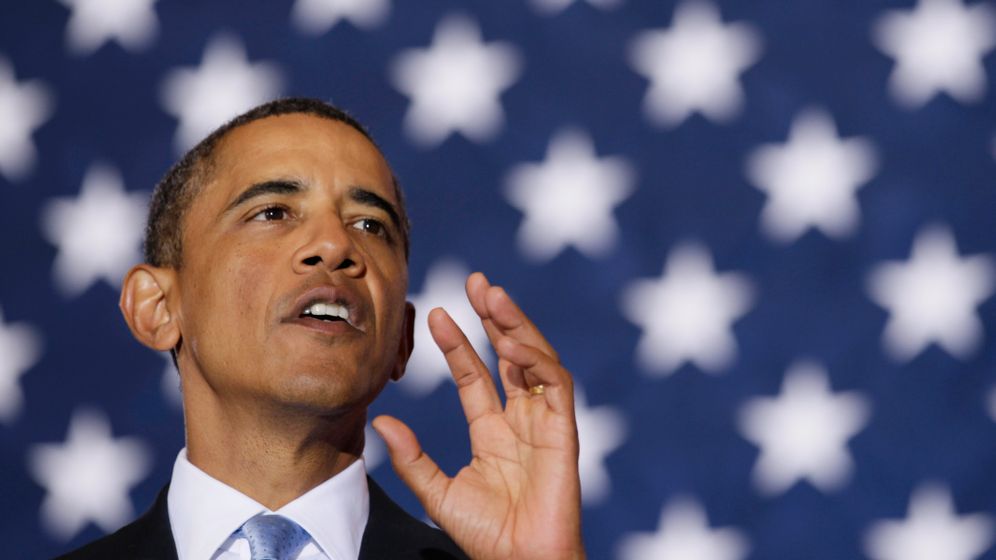 SPIEGEL: The American title of your Obama biography is "The Bridge". You describe the first African-American president as a bridge-builder between the political camps in America. But after two years in office, he is one of the most polarizing presidents of all time. How could that happen?

David Remnick: This drama of a young African American becoming president was enormously important and brought the country together. But that drama is over. Now it's the drama of difficulty in the prose of governing which doesn't have happy endings. Look, this is a president that came into office with shall we count the crises?

SPIEGEL: It would take up too much time.

Remnick: It would take up hours. And so has his rhetoric been heavily geared exclusively toward reconciliation and bringing the nation together? No, it hasn't.

SPIEGEL: But many Americans didn't just want a crisis manager. They saw in Barack Obama the leader of a movement that would change the country -- a sort of political messiah.

Remnick: It was part of Obama's political genius that somebody who is engaged in electoral politics could echo the prophetic voice. Somebody like Martin Luther King, Jr. or Mahatma Gandhi. That's not something a politician can usually do. Part of it had to do with a kind of attachment to a racial drama, a historical drama in the United States. But that's the campaign. Governing is harder.

SPIEGEL: So this magic only works once? And Obama will get punished at the ballot in November?

Remnick: I think it's intermittent. Even if that happens, it will help Obama in the long run that he is also a "shapeshifter." He speaks in a different way in the Oval Office to the entire nation than he does in Selma, Alabama, speaking directly to the African-American community, or to union workers in Ohio. That is another one of his gifts and I think it will help him find a way to reach out to angry voters.

SPIEGEL: Has that gift to adjust also undermined his credibility? In your book, you quote a Hillary Clinton aide who complains that Obama basically changed his life story in the presidential campaign, depending on the audience he spoke with. Does he not stand for anything?

Remnick: I quoted the Clinton aide not to agree with him but to get the point of view of the Clintons, how helpless they felt during their campaign against Obama. Do I think Barack Obama manipulated his life story in some pernicious way? No, I don't. Do I think he gave it its full poetic force? Yes.

Remnick: He did what politicians have done for centuries. They take the facts of their life and try to make it embody a national drama at a certain point in time. Lincoln did this. Obama did that when in his book he describes his upbringing as that of a disadvantaged African American even though he actually grew up under rather comfortable circumstances.

SPIEGEL: Many describe Obama as analytical and cool. But you point out that every chapter of his autobiography ends with him in tears. Can we assume that the current difficulties of his presidency are an emotional burden on him?

Remnick: To find out about his tears was surprising to me as well. But I am sure he has emotions, too. And for me to say he's faking anything, I would have to have evidence that he's faking. I don't. So we can assume he is emotional now as well.

SPIEGEL: Or fed up already with Washington? You write that Obama gets bored easily -- as a student, as a professor, even in the US Senate. In one of his first Senate meetings, he writes a note to an aide after a particularly boring speech by Senator Joe Biden. It says: Shoot me now.

Remnick: I don't find that a most attractive quality. To be transparently bored while being a senator for a very brief period of time seems odd to me and it speaks also to the fact that Obama has a considerable ego.

SPIEGEL: So he is human. That is established after two years in office.

Remnick: More than that. He is a politician. This fact should come as no surprise to anybody who examines his very first moments in politics. The first thing he does when he applies for office in Chicago is to get a competitor off the ballot with legal tricks. I don't know if Mahatma Gandhi would have done that.

SPIEGEL: You found a letter by Obama from his time as a community organizer in Chicago in which he writes that community organizing can be very frustrating. But sometimes something happens, about 5 percent of the time, and you see a hint of the possibilities. Do you think he has seen this hint in polarized Washington?

Remnick: No. I think dealing with the US Senate is very different from dealing with the electorate. America is now extremely fractious and dominated by the loudest voices on cable television and the Internet and Sarah Palin and Glenn Beck and all this stuff. And Obama somehow thinks he can overcome it because he is such a conciliatory character.

SPIEGEL: But he can't.

Remnick: He's wrong. That is his problem. He can't. Even a president cannot in a moment's time utterly transform the political and media culture that he's given.

SPIEGEL: When he was elected, US intellectuals were jubilant to welcome a reflective man into the White House after the Bush years. But now the Tea Party movement is scoring by being openly anti-intellectual again.

Remnick: It's certainly a relief to a lot of people that Obama shows no signs of the incuriosity displayed by his predecessor. Obama has proven his literary and intellectual firepower, it's true, but this can't be the center of focus, not even for literary intellectuals. It matters a great deal more that his decisions in a situation like Afghanistan lead to success -- or a minimum of catastrophe -- than it does that he is reading a novel by Jonathan Franzen. And, by the way, no president -- not Obama or anyone else -- is likely to read and write at the same pace as someone like Teddy Roosevelt, who somehow devoured hundreds of books a year while acing more than a few tests in the Oval Office. The aggressive anti-intellectualism of the Tea Party movement is another matter. People like Glenn Beck are not political analysts, they are circus barkers, fantasists trafficking in bogus history and ugly conspiracy theories. And, unfortunately, he has real influence on millions of people. Another unintended consequence of technology.