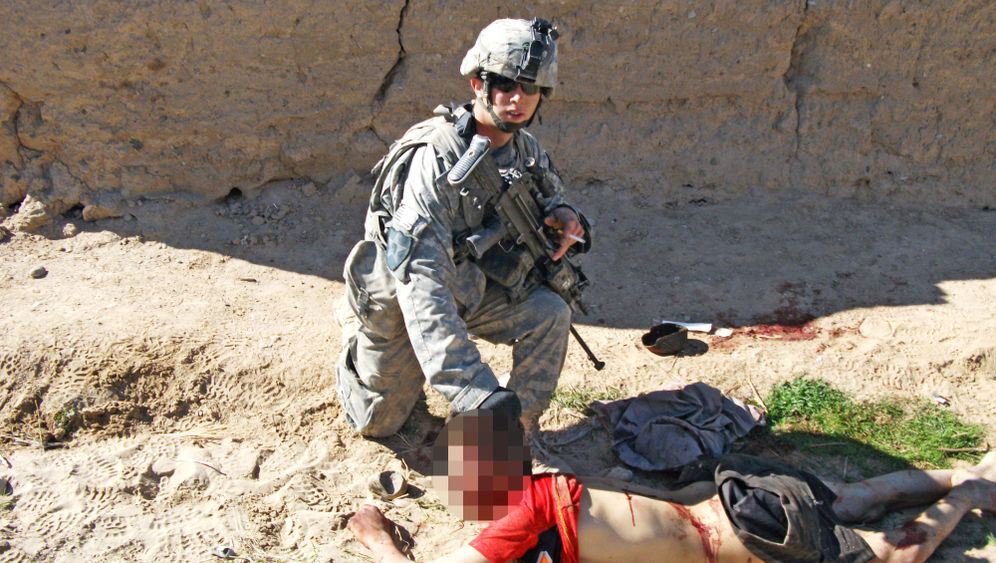 SPIEGEL: Mister Secretary, you are famous for your long list of "Rumsfeld rules" -- little pearls of wisdom you have accumulated over decades in government. Do you happen to have a rule that gives advice on foreign invasions?

Rumsfeld: Actually, I do. When you begin an invasion, a rule is "the mission should determine the coalition, not the other way around." You should not first assemble a coalition with many different views and then try to determine the mission. That leads to a lack of clarity as to the mission.

SPIEGEL: Is that the case with the current NATO invasion in Libya?

Rumsfeld: I think you can make that case. The United States did not articulate, to my knowledge, a clear mission. We started putting together a coalition, and then the coalition fashioned the mission. The coalition members cite humanitarian concerns, but as long as there is ambiguity about whether or not (Moammar) Gadhafi is going to stay or leave, there will be still more people killed. So from a purely humanitarian standpoint, that ambiguity is harmful -- and it can in fact be lethal. If you are part of Gadhafi's government or his military and diplomatic corps, you want to know what is going to happen if you want to support the rebels. As long as it is not clear that our intent is for Gadhafi to be removed from power, people are going to hold back. The longer they hold back, the greater the likelihood that more people will be killed.

SPIEGEL: Your successor, Secretary of Defense Robert Gates, has even stated that Libya is not of vital interest to the United States. Would you agree?

Rumsfeld: I am not going to comment on his statement. But if I look at the really important questions in that region, I see Iran, where there is a strong desire for a freer society and where people are repressed by a small group of ayatollahs. I see Syria, where we can see a similar desire of the people to be free. These two countries fund Hezbollah and other terrorist organizations and are hurting our efforts in Afghanistan and have been extremely harmful in Iraq. Then I also see large, important countries such as Egypt and Saudi Arabia. But the United States is doing things now in Libya.

SPIEGEL: Is Obama's promise of an American short-term engagement with no ground troops realistic?

Rumsfeld: It is hard for anyone out of government to comment on details like that. There is overt action, and then there is covert action. We have no knowledge of what we or the coalition countries may be doing along that line. The press always wants to know how many people will be killed or how much it will cost, but the answers to those questions are not knowable.

SPIEGEL: But it is precisely that kind of information which the American people would like to know. US surveys show that support for the Libya invasion is low. Obama has now transferred command to NATO, but is the alliance even capable of handling it?

Rumsfeld: Time will tell. NATO member states vary dramatically in their capability and in their political steadfastness.

SPIEGEL: Nevertheless, the US is now part of a broad coalition, a stark difference to the Iraq invasion that you were also, in part, responsible for.

SPIEGEL: You were never known as a big believer in Europe's military or its foreign policy. As Secretary of Defense in the Bush administration, you disparaged troublesome allies like Germany and France as "Old Europe."

Rumsfeld: I do not regret that comment. When I served as US Ambassador to NATO in the 1970s, the center of gravity in Europe was France and Germany. There were 15 countries in NATO, one of which, France, was only a partial member. In 2003, at the time I made my "Old Europe" comment, the center of gravity in NATO and Europe had long since shifted to the East. With the former Warsaw Pact countries joining NATO, the alliance has a different mix today. Some people were sensitive about my comment because they thought it was a pejorative way of highlighting demographic realities. Apparently they felt it pointed a white light at a weakness in Europe -- an aging population. Europe has come some distance since World War II in becoming Europe.

SPIEGEL: But you surely could not envision a common European foreign policy, could you? Take the example of Libya -- Germany abstained in the United Nations Security Council, while other nations like France and Britain have taken the lead on the invasion.

Rumsfeld: Oh, my goodness. I am going to leave the future of Europe to the Europeans.

SPIEGEL: Were you surprised that Germany didn't join the Libya coalition?

SPIEGEL: Because you can no longer be surprised by Germany?

Rumsfeld: At 78 years old, I am not surprised at much anymore. Germany has taken divergent positions before, so has France, so has England, so has the US.

SPIEGEL: After the German abstention at the UN, Foreign Minister Guido Westerwelle commented that Germany doesn't always have to stand on the side of its traditional allies. Berlin can look for new partners all over the world. Is this the end of the Westbindung (a term referring to Germany's foreign policy of aligning itself deeply with Western Europe and the Western World) that has been the bedrock of German foreign policy since World War II?

Rumsfeld: I did not read the tea leaves that way. I listened to it, and I said, Well, that is not new.

SPIEGEL: That sounds exceptionally gracious. During his address to the American people on Libya at the end of March, Obama pointed to the Iraq war. He said that regime change there took eight years, cost thousands of American and Iraqi lives as well as nearly a trillion dollars, and that is something the US cannot afford to repeat. Looking back, was the Iraq invasion too costly?

'It Is a Serious Mistake to Run Around and Discredit Karzai'

SPIEGEL: In the run-up to the invasion you created a so-called "parade of horribles" -- a list of worst-case scenarios, of things that might go wrong. How much of that has actually materialized?

Rumsfeld: Oh, not much of it, but some of it. I wanted to think of as many things that could go wrong if we took military action in Iraq, so I made a list. I said, Here are the kinds of things that conceivably can go wrong, where the intelligence might be inaccurate or where Saddam Hussein could do something that one had not expected. We did not anticipate that he would, for example, release 100,000 prisoners or that Baathists would start an insurgency with jihadists. The intelligence community did not predict an insurgency in Iraq. So you can plan for as many things as you can think of, but you cannot plan for everything. You have a plan, and the plan changes with the first contact with the enemy.

SPIEGEL: In any case, the Iraq war was a distraction from the first front in the war on terror -- the battle in Afghanistan.

Rumsfeld: That is not true. The fact of the matter is that we went into Afghanistan with the Northern Alliance and moved al-Qaida and the Taliban out. The Afghan people fashioned a constitution. They elected Hamid Karzai. The level of violence in 2003 and 2004 was going down. In the years of the toughest fighting in Iraq, from 2003 to 2005, the Taliban had all but given up the fight. But in late 2005 and in early 2006, they regrouped, got serious, tried to come back, and that is when we started working on it again.

SPIEGEL: Hamid Karzai, who was transplanted back into Afghanistan by the Bush administration, is still in office. Many consider his corrupt government to be one of the biggest obstacles to progress in Afghanistan.

Rumsfeld: I have no indication that Karzai is personally corrupt. There is corruption in almost every government in the world. Even US congressmen go to jail for it. It is a serious mistake for officials in the current administration to run around and discredit Karzai.

SPIEGEL: That may be, but the large Afghan Kabul Bank has basically served as a personal ATM machine for Afghanistan's elite. Documents obtained by WikiLeaks show that Afghan Vice President Ahmed Zia Massoud traveled to Dubai with $52 million.

Rumsfeld: Still, my attitude is that you should try to encourage someone like Karzai. We have seen three officials in the Obama administration publicly seek to weaken him. If you go back to the Vietnam War, the Kennedy administration did that to President Ngo Dinh Diem, and he ended up being killed. He was replaced by somebody who I do not think anyone thought was better. Look at Pakistan, a lot of criticism focused on General Pervez Musharraf. He went to work in his Army uniform, and the US said, "Oh, my goodness. That is not the way we do it. He should not go to work with his uniform on." He got thrown out. And who is in there now? I would not make a case that the leadership in Pakistan is better today than it was under Musharraf.

SPIEGEL: DER SPIEGEL has published photographs of a US Army " kill team" in Afghanistan. They show photos of American soldiers who appeared to have killed Afghan civilians without any reason. Do the photos remind you of the prisoner abuse committed by US soldiers in the Abu Ghraib prison in Iraq?

Rumsfeld: No. There is no comparison. No one was killed in Abu Ghraib.

SPIEGEL: One person was killed during interrogation there.

SPIEGEL: Measured in those terms, the public outrage this time has been more muted than it was after Abu Ghraib.

Rumsfeld: There is a different administration in office, and the media is not carrying the issue. Unless it is public, unless it is visible, unless it is hyped, why would people make an outcry? They only cry out when they see something before them day after day in the media, on the television and the radio and in the press.

SPIEGEL: You mean that this administration is less likely to be criticized? Hillary Clinton and Barack Obama, then US Senators, openly criticized you on Abu Ghraib, but now you hear less about the "kill team" case. Is that a double standard?

Rumsfeld: There is no question that that group of partisans in the US Senate back then hyped the Abu Ghraib issue enormously. That has not been the case today with the reports about the "kill team."

SPIEGEL: Why are your friends in the Republican Party not more outspoken in the criticism you have shared?

SPIEGEL: When you discuss your political record, you seem remarkably free of doubt. Is that another Rumsfeld rule? Never to show any regret?

Rumsfeld: There is nobody with an ounce of sense who is in (leading government positions) who does not regret something. I have taken the time, four years, to write an 800-page book about my work and I describe many regrets. I have included 3,500 memos on my website, www.rumsfeld.com, where you can go. I offered my resignation twice over the horrible prisoner abuse cases at Abu Ghraib. And you ask me that question, "Do you have any regrets?" Of course I do.

SPIEGEL: Mister Secretary, we thank you for this interview.