SPIEGEL: Mr. ElBaradei, you opposed the authoritarian rule of former President Hosni Mubarak. Now, it appears that you will play a significant role in the interim government put in place after military leaders overthrew the democratically elected president of Egypt. Should a Nobel Peace Prize laureate be part of such a coup?

ElBaradei: Let me make one thing clear: This was not a coup. More than 20 million people took to the streets because the situation was no longer acceptable. Without Morsi's removal from office, we would have been headed toward a fascist state, or there would have been a civil war. It was a painful decision. It was outside the legal framework, but we had no other choice.

SPIEGEL: Are mass demonstrations in Egypt more important than democratic rules? Is the message supposed to be that the street carries more weight than the parliament? 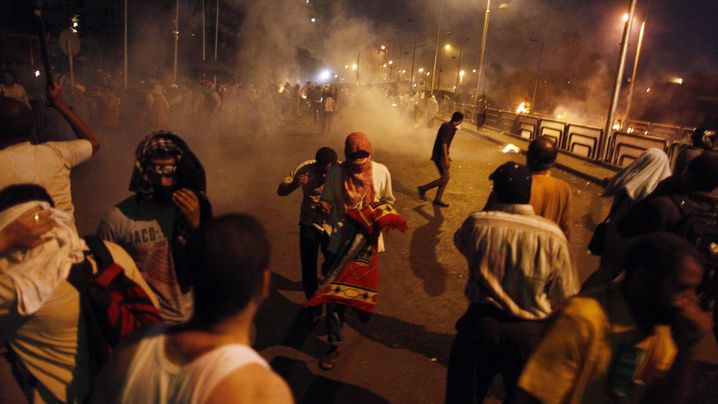 ElBaradei: No. But we didn't have a parliament. We only had a president who may have been elected democratically but who governed autocratically and violated the spirit of democracy. Morsi had targeted the judiciary, pressured the media and hollowed out rights for women and religious minorities. He abused his office to put his Muslim Brothers in key positions. He stepped on all universal values. And he drove his country into economic ruin.

SPIEGEL: Still, it was bizarre to see you sitting behind General Abdel-Fattah el-Sissi, the general who led the coup, together with Coptic Christians and radical Salafists.

ElBaradei: As you said, I was standing with the Coptic Pope as well as the Grand Imam of al-Azhar. Clearly something was terribly wrong with the country that needed to be fixed.

SPIEGEL: No matter how you justify the military's approach, it isn't democratic.

ElBaradei: You cannot apply your high standards to a country burdened with decades of autocratic rule. Our democracy is still in its infancy.

SPIEGEL: Can that justify the fact that hundreds of members of the Muslim Brotherhood are now in custody and the president was placed under house arrest? Many are calling it a witch hunt on the Islamists.

ElBaradei: It cannot come to that, and the military has assured me that there were no arbitrary arrests. For days, I have been demanding that we include the Brotherhood in the process of democratization. No one should be put on trial without a valid reason. Former President Morsi must be treated with dignity. These are the conditions of national reconciliation.

SPIEGEL: Many fear that the opposite is the case. In a SPIEGEL interview last year, you warned against the threat of a civil war.

ElBaradei: Which I saw coming. The military intervention was necessary, precisely so as to avoid a bloody confrontation. Even if emotions are running high, I hope that the threat of civil war has been averted.

SPIEGEL: Aren't you underestimating the Muslim Brotherhood's outrage and that of its millions of supporters? Why should they be interested in participating in elections anymore?

ElBaradei: Egypt is indeed deeply divided. Without reconciliation we have no future. The Muslim Brotherhood is an important part of our society. I very much hope that it will participate in the next round of talks. I will be the first to protest if the imperative of fairness isn't adhered to.

SPIEGEL: But wasn't it violated long ago?

ElBaradei: When I asked the generals, they assured me that many of the reports about arrests are untrue and that the numbers had been greatly exaggerated. They said that when there were arrests, they were made for good reasons, such as illegal weapons possession. And the Islamist TV stations were closed because they were fomenting unrest with their fatwas.

SPIEGEL: Aren't you putting too much trust in the military, given that it has often pursued its own interests in Egypt?

ElBaradei: The military did not force its way into power this time. It has no interest in taking an forward role in politics. The generals are aware that they are historically partly to blame for the disaster in which the country now finds itself. That's why I too don't absolve the army of responsibility.

SPIEGEL: But does the military listen to you? Aren't you concerned about being misused as a fig leaf?

ElBaradei: It's not a question of blind faith. The next meeting with the generals has already been scheduled, and at least they're listening to me. But the military doesn't get a free pass from me, either. My red line is this: I don't align myself with anyone who ignores tolerance and democracy. And they know that.

SPIEGEL: Is there a plan for the transition period?

ElBaradei: It's difficult to draw such a road map in advance. But there should be democratic elections in no more than a year. We need a new constitution that cannot be abused, and that establishes equality and freedom for each individual. I will be involved in drafting it. And we need functioning institutions, an independent judiciary and a separation of powers.

SPIEGEL: US President Barack Obama and US Secretary of State John Kerry called you and treated you like the future president.

ElBaradei: Yes, I spoke with both of them extensively and tried to convince them of the need to depose Morsi. But I don't see myself in the role of the future president. I want to use my influence to bring Egyptians together and help them reconcile -- as an eminence grise, if you will.

SPIEGEL: German Foreign Minister Guido Westerwelle is using the phrase "severe setback for democracy" to describe what most German politicians call a military coup. How do you intend to regain the lost trust of your partners in the West?

ElBaradei: The Germans should be the first to sympathize with us. They know how difficult it is to build a democracy following a dictatorship, and they were the first to be critical of Morsi's anti-democratic policies. Let me remind you of the employees of political foundations that were hauled into court during Morsi's rule. We are hoping for financial support from Berlin, but also for advice in developing our institutions in order to bridge the period until we have a new president. The most important thing is to provide an economic outlook for the courageous young people who took to the streets in such great numbers to fight for more democracy.

SPIEGEL: If the Muslim Brotherhood runs in the next election and wins, would you accept one of their members as the country's new leader?

ElBaradei: Yes, if they commit themselves to democracy, and if we have a constitution and a parliament that will prevent them from abusing their power the way Morsi did.