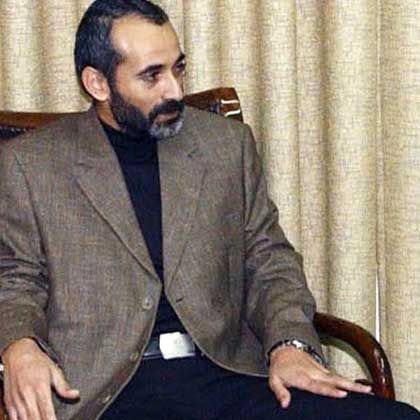 The killing of Bahaa Balusha's three sons in late 2006 sparked the street fighting between Fatah and Hamas gunmen that culminated in Hamas' seizure of Gaza last week.

SPIEGEL ONLINE: As the long-standing intelligence service coordinator of the Palestinian Authority (PA), you are at the top of the execution list of Hamas extremists. There have been six attempts on your life so far. On Dec. 11 of last year, your three sons were killed in an attack presumably carried out by militant followers of Hamas. Will you still return to Gaza?

Bahaa Balusha: I have left behind something very great in Gaza. My son Salam, three years old. My son Ahmed, five years old. And Usama, eight years old. The terrorists killed them before my eyes when I wanted to pick them up from school. The car was turned to a sieve by 250 bullets. I haven't shed a tear following their deaths, and I have also never visited their grave. I have sworn to visit their grave only when the terrorists have been defeated. I will return to Gaza to achieve that.

SPIEGEL ONLINE: For about six months you have warned that Hamas wants to seize power in Gaza. If you saw the coup coming, why did PA security forces not prevent it?

Bahaa Balusha: We knew this coup was planned, but we could not prevent it. That's mainly the fault of other countries: After Hamas won the elections in January of 2006, all foreign aid payments to the Palestinian Authority were discontinued, as a collective punishment. But we would have needed precisely that money in order to prepare our security forces to fight Hamas. We are the only ones who could have stopped Hamas, but we were not allowed.

SPIEGEL ONLINE: But the PA's security forces were still supported and trained by the West following the sanctions?

Bahaa Balusha: That's a lie, a complete lie. We received no more weapons from the United States, just a little training.

SPIEGEL ONLINE: Iran openly admits to supporting Hamas. What does Iranian support for the fundamentalist Muslim group consist in, exactly?

Bahaa Balusha: While we sat there empty-handed, Hamas armed itself using coffers full of money from Iran. We know several thousand Hamas fighters were trained in Iran, Syria and Lebanon. They come from various branches of the armed wing of Hamas and go by the name of "Qassam Army." There, they did not train for the struggle against Israel. Instead, they learned how to eliminate political enemies using explosives and raids. They learned how to kill there.

SPIEGEL ONLINE: Were there foreigners who came to Gaza in order to fight side by side with Hamas?

Bahaa Balusha: There is an al-Qaida cell in Gaza. We know this. There are some foreigners: Pakistanis, Sudanese, a small group of Yemenis. When the Israelis withdrew from Gaza, Hamas tore down the wall on the border with Egypt. It took a few days before the border was back under control. The foreigners took advantage of this moment to come to Gaza.

SPIEGEL ONLINE: How large is this group?

Bahaa Balusha: The number doesn't matter. It's the mentality that counts. During the Gaza coup, some foreigners were present at the Hamas command center and directed and guided the war from there. Other extreme splinter groups were also involved, one of them close to Hezbollah. A group that broke away from Fatah, the Ayman Jude Commando, has also joined the side of Hamas.

SPIEGEL ONLINE: A group close to al-Qaida called Fatah al-Islam has been fighting the Lebanese military in a Palestinian refugee camp in Lebanon for more than a month. Is the outbreak of violence in Gaza connected to the fighting in Lebanon?

Bahaa Balusha: Iran and Syria fear there will be an attack by the United States and Israel before the end of the summer, so they have built up extremist groups in Lebanon and Gaza, groups located right on Israel's doorstep and meant to prevent the United States from attacking. The political murders in Lebanon, the coup in Gaza -- everything points in the same direction. Next, there will be terror attacks in Jordan. It will be a hot summer.

SPIEGEL ONLINE: The Fatah militias in Gaza have had to acknowledge defeat. Their leaders are in exile in West Jordan, like you. Can Fatah take back power in Gaza? How would that be done?

Bahaa Balusha: Hamas will hold out for four months, no longer. Then it will be worn out by internal conflicts. Then, it will be gone. Hamas faces a serious problem: They have armed 100,000 fighters in Gaza and will not be able to keep them under control. When the question now becomes that of distributing power, everyone will demand their reward. Hamas leader Ismail Haniyeh is practically powerless already. No one listens to him any longer. The hardliners Haniyeh had to sacrifice in order to form a unified government with Fatah will take their revenge on him for having done this. That's especially true of Mahmoud al-Zahar, the former foreign minister, and of Said Siam, who was interior minister before being thrown out.