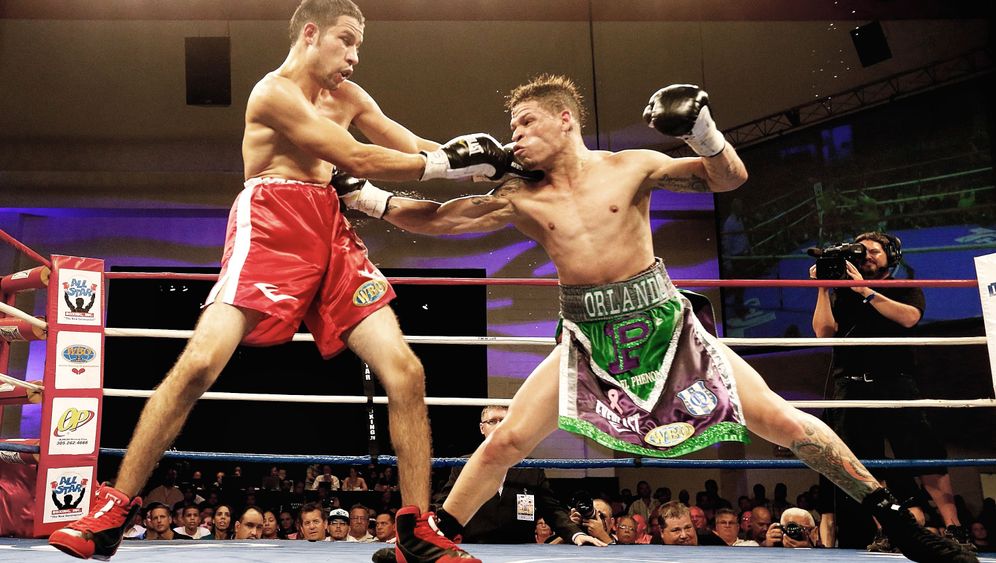 Photo Gallery: Coming Out in the Macho World of Boxing

SPIEGEL: Mr. Cruz, is it important as a boxer to conform to the image of a tough guy?

Cruz: Boxing is a sport that is largely dominated by machos, by men who think we have to conform to a very specific role model. The ideal boxer doesn't think too much, is raw and brimming with strength. I am also fascinated by strength, but for me style is a part of that.

SPIEGEL: At the beginning of October, you announced that you were gay. Then two weeks ago in Florida, you climbed into the ring for the first time since you came out. How did your fans and your opponent react?

Cruz: I had the feeling that the spectators accepted me. They kept calling out my name, much louder than during my earlier fights. My opponent, the Mexican Jorge Pazos, had said beforehand that what I did outside the ring was none of his business. I think that is the right attitude.

SPIEGEL: Once, when Pazos missed you, you shrugged your shoulders. Another time, you beat your chest wildly with your fists.

Cruz: Those gestures were my way of saying: "This is my ring, my moment. No one is going to take this away from me." My body language was also important because I wanted to prove to people that I am not a girl in the ring. I am a man in every sense of the word. That is how I want the spectators to see me.

SPIEGEL: So you do have to fulfill a few clichés about boxers?

Cruz: No, but being a bit macho is part of the game in the ring.

SPIEGEL: You have been a professional boxer for twelve years. Why did you come out at this particular point in time?

Cruz: I have earned myself respect as an athlete. I have only lost 2 out of 22 professional fights. I knocked out some of my opponents in the first round. But I never really received respect as a person. That's something I had come to realize over the past few years. The end of my boxing career is no longer that far off, and it was time for me to make peace with myself. And there was a second reason for me to come out: I hoped it would make me a better boxer.

SPIEGEL: How do you mean?

Cruz: Until now, I have kept my personal life and my career strictly separate from each other. No one was supposed to know that I'm gay. This game of hide-and-seek was incredibly strenuous and it took a lot of energy out of me. Now I'm hoping that I can put that energy into my training.

SPIEGEL: Did you fall in love when you were a teenager?

SPIEGEL: With a girl or a boy?

Cruz: With a girl, she was the great love of my youth. We split up when we were seventeen. She was the person who gave me my first kiss.

SPIEGEL: When did you realize that you were gay?

Cruz: I was 19 years old. I was boxing at the Sydney Olympic Games in 2000. I met a man there. And when I got home, I sensed that something in me had changed.

SPIEGEL: How did you feel about that?

Cruz: Awful, I was in a very bad state.

Cruz: Because I wasn't prepared for it. For a long time I didn't want to accept that I was gay. Better said: I couldn't accept it because I was too afraid. Homosexuals were discriminated against in Puerto Rico back then, sometimes even killed. I had a friend named José, but we called him Linoshka because he was a transvestite. He was stabbed to death in the street at the age of 19 by a homophobe because he had taken part in a gay-pride parade.

SPIEGEL: How did you handle it all?

Cruz: It was a painful path, but I was lucky in that my mother gave me her support. One year after the Olympics, I explained to my parents that I was gay. My mother told me she didn't care, and that she loved me. After that, we both cried for joy.

SPIEGEL: And your father?

Cruz: That was more difficult. He was never as sympathetic as my mother. In the meantime, my parents have separated. During my fight two weeks ago, my mother was sitting right next to the ring; my father was up in the stands. But I was happy that he was there at all.

SPIEGEL: For 12 years, you tried to keep your homosexuality secret. How did you do that?

Cruz: I acted a part. I sensed the suspicion. When other guys talked about a woman's backside, they'd pay close attention to see whether I joined in. So I played along: "Yeah, yeah, great ass." But inside me there was only emptiness; that wasn't me. Each time, I was denying my own self.

SPIEGEL: How did that feel?

Cruz: I had bad thoughts about myself because I wasn't being true to myself. Inside there was emptiness, and it felt as though I was being weighed down by five tons.

SPIEGEL: Were there people in the boxing scene who knew the truth?

Cruz: That's inevitable. Óscar de la Hoya, my former promoter, once asked me quite openly before a fight: "Orlando, tell me, are you going to tell people that you are gay?" There were other people standing around us too, boxers, managers. I was shocked and said: "No, I'm a man."

SPIEGEL: Did people put you down?

Cruz: Four years ago, I was fighting for the world championship title in Puerto Rico. The spectators bad-mouthed me; they called me a faggot. They told my opponent to pluck my feathers. In Puerto Rico, when you talk disparagingly about a gay man, you call him a duck. That's when I realized that something had to change.

SPIEGEL: That was the key moment for you?

Cruz: Exactly. In 2008, I moved from Puerto Rico to New Jersey. The distance did me good, also because I was able to prepare myself at leisure for my coming out.

SPIEGEL: How did you prepare yourself for it?

Cruz: First of all, I was forced recognize that I could not manage it alone. Three years ago, I went and got help from a psychologist, and we met every two weeks. He helped me to work out whether I really wanted to come out for my own sake, or whether I was being pushed into doing it. Only once it was clear to me that this was my most deep-seated wish was I was able to go through with it. Six months ago in New York, I met with the founder of an organization that fights for gay and lesbian rights. He helped me with the media relations work. He gave me tips for my press release, and we set up a Twitter profile especially for my coming out, which I now post to in English and Spanish.

SPIEGEL: Was your boxing team initiated into your plans?

Cruz: Of course. My promoter Tuto Zabala was very cautious at first. He asked all the important contacts whether anyone had problems with a gay boxer. He went to the television network Telemundo, which broadcasts all my fights in the US, and he talked to the boxing organisation WBO. They all indicated that my coming out was fine by them.

SPIEGEL: Were you nevertheless frightened?

Cruz: The preparations dispelled my fears, but I really was nervous and worried about what the reactions would be. I was prepared for a lot of nasty comments. But after I came out most people were happy for me. Professionals like world champion Miguel Cotto stood by me; he congratulated me. Ninety-five percent of the reactions were positive.

SPIEGEL: And the remaining five percent?

Cruz: The other day I was training at a boxing gym in Puerto Rico, and a group of boxers were standing next to me. They were talking about me and I could hear everything. One of them said to his pals: "Hey, we'd better not take a shower before going home today." That's totally ignorant. I'm a professional, an athlete. I go to the gym every day and I train hard. I don't go there to watch anyone in the shower.

SPIEGEL: Did you confront them?

Cruz: No. In the old days that would have made me angry. But now that I've come out, everyone knows the truth. That's like a protective shield against comments like that. Stupid remarks and jokes no longer hurt me, because I can stand by being gay. Nowadays I can even laugh at jokes about gays. Now I feel free, hungry and strong.

SPIEGEL: Have people outside the world of boxing also been in touch with you?

Cruz: Loads of them. There are messages from Venezuela, Poland and Australia in my mailbox. Even from Afghanistan. Many of the men who write to me have fallen in love with another man and don't know how to explain this to their families. I can offer advice because I know what it's like.

SPIEGEL: Do you know other professional athletes who are gay?

Cruz: If I did, I certainly wouldn't mention their names. But there are definitely many more homosexuals in sports than we think.

SPIEGEL: News of your coming out spread incredibly quickly. Were you expecting that?

Cruz: Even though I tried to be prepared for everything, it was more than I could cope with. Suddenly I was sitting on US morning TV shows. Producers were asking me whether I would be interested in a reality show about myself. I received offers to take part in a TV celebrity dancing show. Even my mother was interviewed by journalists.

SPIEGEL: Why did your coming out attract so much attention?

Cruz: It's not just because I'm a professional athlete. It is very unusual for someone from Latin American society to openly stand by his homosexuality. In my hometown, there are still lots of prejudices against gays. We are often not considered to be fully-fledged people. The family is sacred there; having children means more than anything else.

SPIEGEL: Englishman Justin Fashanu was the first and so far only professional football player to reveal that he was gay. After coming out in 1990, he constantly felt discriminated against, and later committed suicide.

Cruz: Of course, there are still some tough days ahead for me. But I have built myself such a strong network that I can be sure of always receiving support. Some 15 or 20 years ago it would not have been possible for me to come out. Back then, people still had such narrow views, but today many of them are more liberal. Being gay is no longer a taboo in many parts of society. That has affected sports, even boxing.

SPIEGEL: Since your victory against Jorge Pazos you have been considered a candidate to fight for the World Boxing Organization title. You could become the world champion.

SPIEGEL: Did you have many female admirers before coming out?

Cruz: Oh yes, I got lots of offers. The girls would come around after my fights wanting to flirt. They'd say: "Hey, you're so cute, come on Orlando."

SPIEGEL: What did you answer?

Cruz: Well, what do you think? I said: "Sorry, not with me. That doesn't work on me." I think there are a few girls who will be sad after my coming out. I'm almost a bit sorry about that.

SPIEGEL: Your last opponent had no problem with your homosexuality. What will you do if your next adversary is less tolerant?

Cruz: Oh, you know, there will be people like that, I'm sure. Someone will come along who calls me a faggot or a fairy. I'll say: "What? You call me a faggot? Okay, if you like. But you'd better watch out, because I'm the faggot who's going to kick your ass."

SPIEGEL: Mr. Cruz, thank you for this interview.