SPIEGEL: Madam Secretary, you once called the United States the "indispensable nation." What did you actually mean by that?

Albright: We coined that term after the presidencies of Ronald Reagan and George H. W. Bush, during which the American public had become tired and concerned about overextension abroad. President Bill Clinton and I felt America needed to be engaged, especially when it was in a mood to worry about itself more. So it was a term that was very important to make clear to the American people that the international system needed an engaged America.

SPIEGEL: Do the American people need another reminder? In this presidential campaign, both candidates have spoken more about nation-building at home than abroad.

Albright: Americans are tired after the war in Iraq and also after Afghanistan, which has been the longest war in American history. President Barack Obama has said that we need to spend more money at home.

SPIEGEL: Will we see a more isolationist America?

Albright: Oh no. The term "indispensable nation" still applies. However, there is nothing in the word "indispensable" that means going it alone, and so President Obama has long insisted on the need for partnership and alliance-building, particularly with Europe.

SPIEGEL: Yet in the recent presidential debate on foreign policy, Europe was barely mentioned. And when it was finally discussed, it was cited as a negative example of fiscal irresponsibility.

Albright: I was born in Europe and I would strongly disagree with the notion that the US is not paying attention to Europe. Because the United States has talked about rebalancing to Asia, there has been a sense by Europeans that we Americans care less about Europe. That is simply not true. Frankly, on a global scale Europe is no longer a problem in spite of the current euro crisis. Europe, rather, has to be part of the solution, as it was during the Libya intervention.

SPIEGEL: Currently, American foreign policy still seems fixated on the Middle East. Is that a stifling legacy of the Bush years?

SPIEGEL: Yet it is China, and not countries in the Middle East, that holds the vast majority of American debt. Would Washington not be better advised to focus more on relations with Beijing?

SPIEGEL: The Obama administration made a real effort to reach out to China. But when Obama traveled there, he received a cold welcome. Has China become more aggressive in its attitude toward the United States?

Albright: I do think the Chinese feel themselves to be a stronger global power. That is a statement of fact. If they did not, they would be misrepresenting themselves. What is interesting is to watch how they are currently changing their generational leadership, something that they thought was going to be a lot smoother than it actually is.

SPIEGEL: In a diplomatic cable released by WikiLeaks, your successor Hillary Clinton asked ruefully about the Chinese: "How do you deal toughly with your banker?" Are Americans resigned to the fact that they can no longer dictate global policy?

Albright: No. What distinguishes Americans from many people in the world is our kind of endemic optimism. However, there is a genuine question as to what happened to us during the George W. Bush administration. Why were we in Iraq? Why have we been in Afghanistan for more than 10 years? It is time to consider what the effect of those two wars has been on our national debt and our standing in the world.

SPIEGEL: In surveys, a majority of US citizens now say that China is more influential than America. Do Americans believe their country is in decline?

Albright: I do not think Americans feel that the US is in decline. We are still a "beacon of hope," a country that accepts diversity in a way that other countries do not. There is no other country like that; we are exceptional. We see demagogical campaigning by Governor Mitt Romney, saying that America is not as strong as it once was. But that simply unmasks his shallow and misguided understanding of foreign policy. President Obama has highlighted again and again that, in a more multi-polar world, America is stronger in partnership with growing powers.

SPIEGEL: Romney has attacked Obama for "apologizing for America around the globe."

Albright: It is an accusation that does not make any sense. I think that the United States is the strongest when we are realistic, when we respect the views of other countries. Under George W. Bush, the word "exceptionalism" was extrapolated to mean that we Americans are so special that we do not have to do anything other countries do. There was a very strong negative reaction worldwide to that attitude, which in many ways undermined America's reputation. And President Obama had to deal with the inheritance that he got and reconcile the world with US policy. I thought President Obama's speech to the Muslim world in Cairo -- and many other appearances -- did exactly that. So I find Romney's terminology insulting; it will lead us backwards not forward.

SPIEGEL: Still, Obama has not achieved peace in the Middle East, the US relationship with Russia and China remains troubled and the Muslim world still deeply skeptical of American leadership...

Albright: President Obama moved forward on a Strategic Arms Control Treaty with the Russians. He said he would get us out of Iraq. He has. He has made very clear that we will be out of Afghanistan by 2014. Osama bin Laden is dead. He has signed major trade agreements. He has worked on trying to change the relationship with Muslim-majority countries. These are huge problems that can not be resolved immediately, which is why President Obama needs a second term.

SPIEGEL: You were instrumental in convincing the US government to help end the Balkan wars in the 1990s. Why has America not yet intervened in Syria?

Albright: The West has done quite a lot in providing non-lethal assistance to opposition groups, trying to figure out how to help with the refugees and putting pressure on Assad. What is really quite upsetting is how Russia is stopping the process from moving forward.

SPIEGEL: Is that not just a convenient excuse? Would the West be willing to do more if Russia were on board?

Albright: People suggest the establishment of no-fly zones in Syria. But there is a real question as to whether it would work. There are also issues about what kind of weapons get into the hands of some of the rebels.

SPIEGEL: So the "beacon of hope" will just sit back and watch the Syrian opposition being slaughtered?

Albright: It is not just sitting back. This goes back to what I said earlier. Sometimes you have to push, but you have to also recognize what really is doable, short of invading another Muslim country. A flat-out military intervention, given the strength of the Syrian army, I am not sure is something that is doable.

SPIEGEL: Anne-Marie Slaughter, former director of policy planning at the State Department, caused a stir by resigning from her influential position to spend more time with her family -- and arguing in a widely-read article in the Atlantic that "women still can't have it all." As the first woman to become secretary of state in the US, what are your thoughts on her viewpoint?

Albright: I am of a different generation than Anne-Marie Slaughter, so I think that the expectations are always very different. I was a lot older when I became secretary of state and my children were grown up. The part that makes me unhappy is when women are judgmental about each other's choices. But since my time in office we have seen other female secretaries of state, such as Condoleezza Rice and now Hillary Clinton. My youngest granddaughter, when she turned seven, said: "What is the big deal about grandma being secretary of state? Only girls are secretary of state." So things have changed quite a bit. 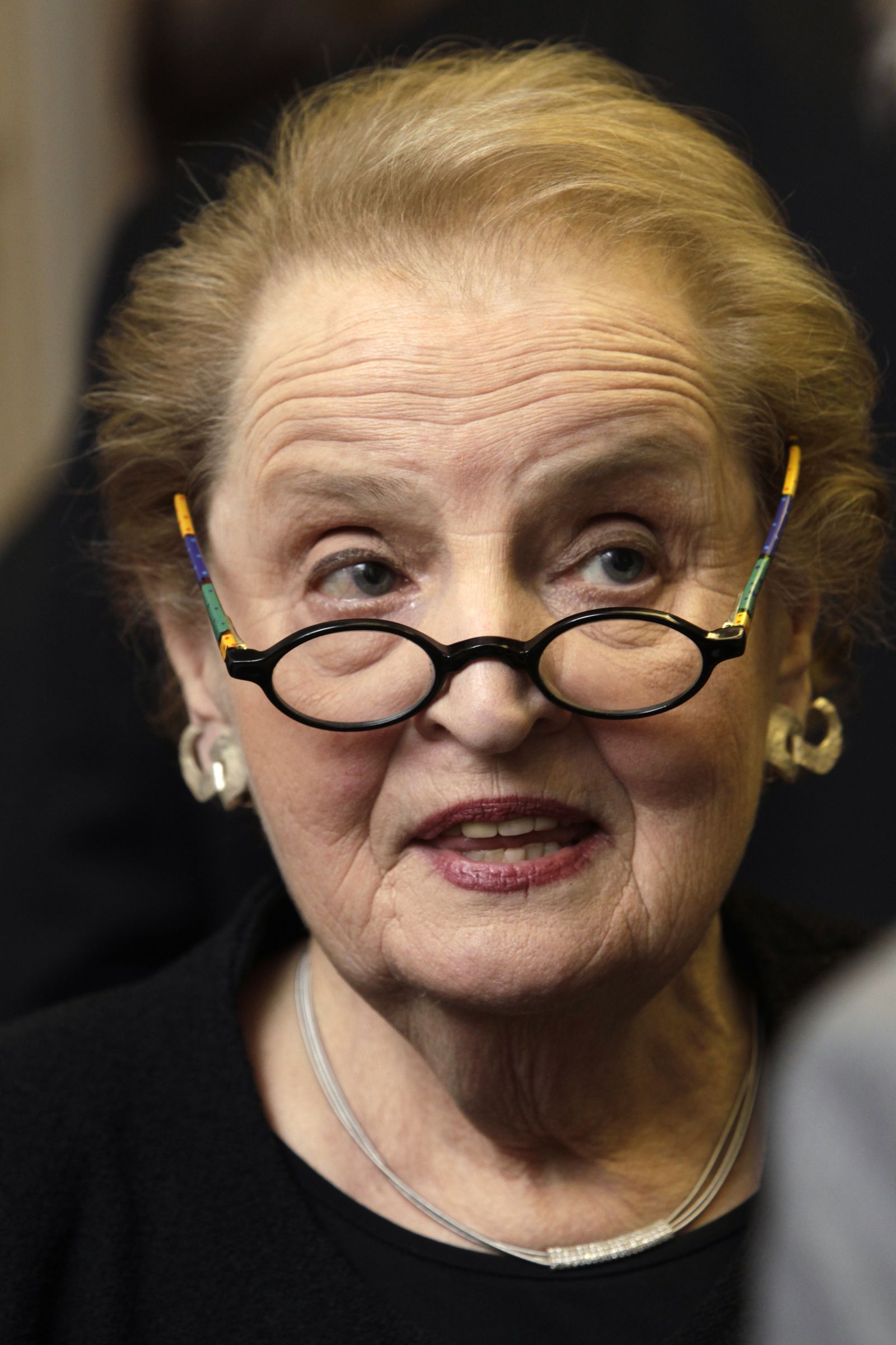 Former US Secretary of State Madeleine Albright says that the US remains an "indispensable nation."