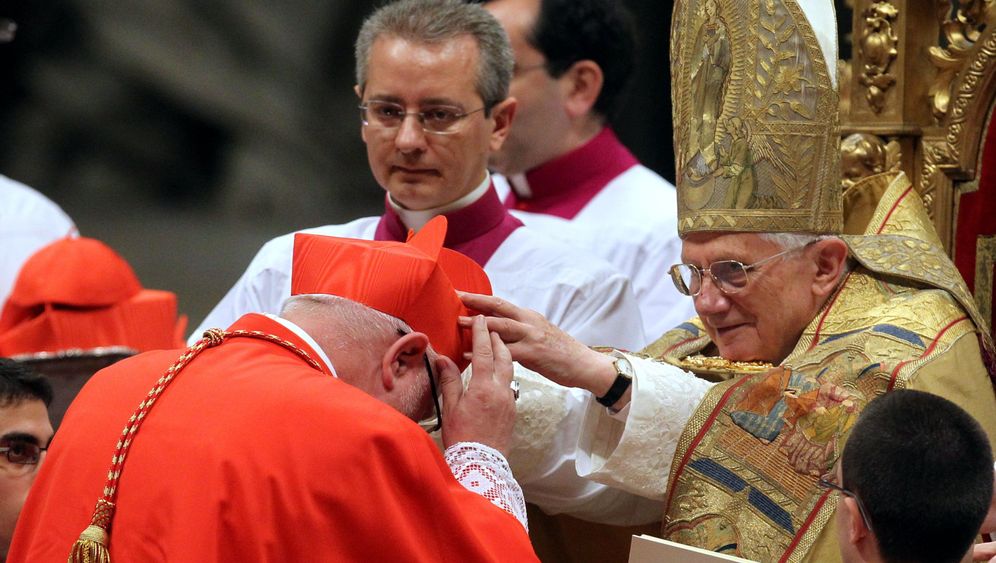 SPIEGEL: Mr. Berger, you describe the Catholic Church as a homophobic organization. Why did it take you, a homosexual theologian, so long to resign from your offices in the church?

Berger: Because such an exit isn't a question of days. Even as a child I wanted to be a priest, but by the time I had finished high school it was clear to me that I would not be able to live a life of celibacy.

SPIEGEL: And you became a theologian anyway?

Berger: Yes, because the church never lost its attraction for me. The Tridentine Mass was like a gateway drug for me. When I was 17, I was with the Pius Brothers in Lower Bavaria. What I saw there was a fascinatingly aesthetic baroque dream of leaf gold and Brussels Bobbin lace. I couldn't get away from it. It only became clear to me later what I had got involved in, and the dream turned more and more into a nightmare.

Berger: Because my own life, my life with a partner, increasingly contradicted what was said and demanded in my church environment. Through my enthusiasm for the traditional mass and for conservative theology, I became increasingly involved with conservative Catholic networks of young aristocrats, industrialists and reputable academics. They utterly condemned homosexuality.

SPIEGEL: How did that manifest itself?

Berger: I kept having to listen to inhuman views. For example, Hitler was praised for having interned and murdered homosexuals in concentration camps. The point came when I couldn't remain silent any longer ...

SPIEGEL: ... after you and your career had profited for a long time from contact with these right-wing circles.

Berger: Ever since Pope Benedict XVI, at the latest, you have to be anti-modern to have a career in the Catholic Church. I criticized the relatively progressive theology and left-wing church policy of Karl Rahner. That is how people noticed me. Because I was an expert on the medieval thinker Thomas Aquinas, I was invited by almost all right-wing conservative groups to give lectures. I was in touch with the Sedevacantists, the Priestly Fraternity of St. Peter, the Society for the Defense of Tradition, Family and Property, Una Voce, Opus Dei and the Servants of Jesus and Mary.

SPIEGEL: What went on at the meetings?

Berger: These groups are very careful about who they invite. They meet in very high-class venues, sometimes in former aristocratic residences or in luxury hotels. Old men smoke fat cigars, drink expensive red wine and eat well. It is a parallel world whose inhabitants seek to defy the modern world.

SPIEGEL: And what do they discuss?

Berger: They talk about a supposed Jewish global conspiracy or about how to keep emancipators, freemasons and gays out of the church. For many years, there were "gentlemen's evenings" in Düsseldorf that were organized by a tax consultant. They increasingly became a focal point for a right-wing Catholic network. At one of the meetings, which were regularly visited by senior clerics, the man sitting next to me, a retired university professor, was railing against the gay parades on Christopher Street Day (in Germany): "Instead of standing in a corner, being ashamed of themselves and just shutting up, they behave like pigs gone wild."

SPIEGEL: Why didn't you turn your back on the church at that point?

Berger: Many gays are attracted by the clear hierarchies of the male world of Catholic rituals. Among clerics I discovered extremely effeminate behavior of the sort I knew well from certain gay scenes. People give each other women's names and attach very high importance to clerical robes in all colors. Just think of the nicknames Bishop Walter Mixa (who recently stepped down amid accusations of violence and financial irregularities) and his housemaster friend gave each other: "Hasi," or "bunny," and "Monsi," short for monsignore.

SPIEGEL: Did you get the impression that your homosexuality may even have helped your career?

Berger: In clerical circles I kept getting shown through unmistakeable looks, hugs, stroking of my upper arms and excessively long handshakes that one didn't just appreciate my work a lot. The fact that many prelates had homosexual tendencies is certain to have made them more ready to help me get positions.

SPIEGEL: And these gentlemen weren't homophobic?

Berger: The contradiction between evident homosexual inclinations and homophobic statements is one way in which people in the church deal with their own, usually suppressed inclination.

SPIEGEL: You must explain that to us.

Berger: Evidently those who succumb to their desires are rejected particularly vehemently by those who painfully suppress such leanings in themselves. In the course of my own close cooperation with clerics, something I had long disavowed suddenly became clear to me: The fiercest homophobia in the Catholic Church comes from homophile clerics who desperately suppress their own sexuality.

SPIEGEL: Did you feel this pressure yourself?

Berger: I published the magazine Theological Issues and was summoned by the sponsors every time a faintly liberal view was espoused. Opus Dei people were always there to observe. They said I wasn't allowed to write "life partner;" it should instead be referred to as "fornication partner." "Homosexuality" was too neutral, they said. One had to refer to it as "unnatural fornication."

SPIEGEL: What finally triggered your departure?

Berger: The appearance of the bishop of Essen, Franz-Josef Overbeck, on Anne Will (a prominent Sunday night political talk show broadcast on German public television station ARD), when he described homosexuality as unnatural and a sin during a debate about sexual abuse.

SPIEGEL: Did that make clear to you that you'd been part of the church too long?

Berger: Instead of standing up for my rights and those of my partner I supported anti-democratic and anti-liberal groups that fight against these rights and in which some people dream of a fundamentalist Catholic religious state or seriously call for a Catholic jihad. I joined in this playing with fire and was then naively appalled when the whole house was ablaze. I regret that.

SPIEGEL: It sounds as if your book is a confession. But your former colleagues are not prepared to grant you absolution.

Berger: A reputable theologian loyal to the pope put it clearly: He said I was given the opportunity to discreetly distance myself from the "scene." I was offered the chance to continue this hypocrisy and go on climbing up the career ladder. Because I didn't want to take part in this ecclesiastic "crisis management," I was accused of "shamelessly seeking the public spotlight."

SPIEGEL: What impact do you hope your book will have?

Berger: I hope that the church will at last confront the issue of homophobia. It must recognize that a large proportion of the Catholic clerics and trainee priests in Europe and the United States are homosexual.

SPIEGEL: Can one really apply your experiences with peripheral right-wing groups to the whole church?

Berger: Ever since the rehabilitation of the Pius Brothers with a Holocaust denier among its leaders, it has become evident how much influence extreme conservative circles have won in just a few years. The views that used to be exchanged discreetly at gentlemen's evenings or in the editorial conferences of newspapers and magazines have now been declared part of the official doctrine of the Catholic Church by leading clerics.

SPIEGEL: Where do you think this development will end?

Berger: The fear of the world, of a spoiled, godless civil society, from which the Catholic Church wants to seal itself off in a bastion, will lead into isolation. There is no longer much sign of the open spirit, the sense of renewal that emanated from the Second Vatican Council. In order to defend itself, the Vatican is instead relying increasingly on reactionary troops. It is closing ranks with evangelists, bible fundamentals and extremely reactionary forces. But a fundamentalist parallel world will turn the people's church into a sect.