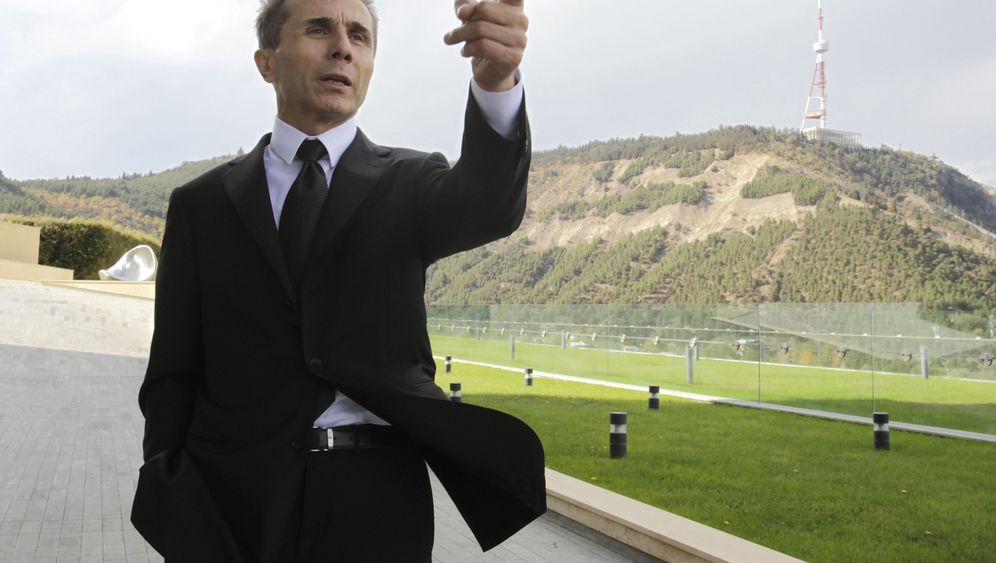 Just days after German Foreign Minister Guido Westerwelle had called for freedom of the press and "respect for the rights of the opposition" during a visit to Georgia, President Mikheil Saakashvili has mounted a major campaign against his political adversaries. More than 100 supporters of opposition leader and oligarch Bidzina Ivanishvili were summoned for questioning earlier this month. The interrogations, which went on for hours, prompted the human rights group Amnesty International to accuse Saakashvili of conducting a deliberate campaign of intimidation.

Ivanishvili, who financed Saakashvili's "Rose Revolution" in 2003, hopes to defeat the president's party in parliamentary elections this fall. Polls show his "Georgian Dream" movement, established in December 2011, having a 28 percent approval rating. Saakashvili's government has already tightened laws on party funding and has stripped Ivanishvili, whose net worth the US magazine Forbes estimates at $5 billion (€3.8 billion), of his citizenship. The 56-year-old businessman lives in a futuristic glass-and-steel palace high above the roofs of the Georgian capital Tbilisi.

In an interview with SPIEGEL ONLINE, Ivanishvili sets out his political vision and paints a bleak picture of Georgia under Saakashvili.

SPIEGEL ONLINE: Mr. Ivanishvili, you didn't give interviews until recently. You say that you can't stand journalists and hate the limelight. Where do your political ambitions suddenly come from?

Ivanishvili: This is my philosophy: I prefer to stay out of the public eye. I love freedom. But I've come under more and more pressure in recent years. I had to choose: Either leave the country, where it's become dangerous for me, or go on the offensive.

SPIEGEL ONLINE: If being in the public eye is so distasteful to you, why don't you support an existing opposition party?

Ivanishvili: Saakashvili has bought up one party after the next. These are pseudo-opposition parties. But even the few honest opposition politicians have lost the confidence of citizens. I am the last free man in this country. I have money, but my most important capital is the trust of the people.

SPIEGEL ONLINE: Those are grand words. If you win, what do you have planned?

Ivanishvili: Europe is our role model, goal and destiny. We want to become part of it. We will very quickly model our institutions after Europe's, and we will free the judiciary and create independent media. After one-and-a-half or two years, I will then withdraw from politics.

SPIEGEL ONLINE: You just want to give up everything again?

Ivanishvili: No. I will work with the civil society. Of course, I won't be as passive as I used to be. I will help society to contain the government I leave behind.

SPIEGEL ONLINE: Why are you buying full-page ads in US newspapers like the Washington Post, where you call on the West to end its support for Saakashvili?

Ivanishvili: America has chosen Georgia as a junior partner. The United States believes that Saakashvili is creating a democratic Georgia, but these are merely facades. I want to show the Americans his true face. Saakashvili is pulling the wool over their eyes.

SPIEGEL ONLINE: What do you mean?

Ivanishvili: For the first two years after taking office in 2004, he actually did build a democratic system. But he has departed from that path. He is developing a totalitarian state.

SPIEGEL ONLINE: What are you demanding from the West?

Ivanishvili: I don't have the right to demand anything. But I would like to ask the West to take a look at the real situation in our country and stop being fooled by Saakashvili. Europe and America should judge Georgia's leadership on the basis of their actions, not just their words and promises. Otherwise Saakashvili will transform Georgia into a dictatorship.

SPIEGEL ONLINE: What do you propose?

Ivanishvili: I've been talking to the ambassadors of European countries a lot lately. I hope Europe will help us conduct truly free and democratic elections. Georgia needs to set a precedent: a transfer of power through elections rather than a revolution, as is usually the case here. I'm arguing in favor of having international observers who would monitor the election campaign for six months, from the Organization for Security and Co-operation in Europe (OSCE) for example.

SPIEGEL ONLINE: Aren't you painting too negative a picture of Saakashvili? He introduced a police reform that attracted a lot of attention abroad.

Ivanishvili: The police reform was successful. Thousands of police officers have stopped accepting bribes, while police throughout the former Soviet Union remain corrupt. Corruption is being fought at the lower levels, but a small group of people are lining their pockets at the highest level.

SPIEGEL ONLINE: Are you accusing Saakashvili of personal enrichment?

Ivanishvili: Of course. He created this system. Some 15 to 20 people dominate the economy. The prosecutor general controls large segments of the Georgian economy, while former Defense Minister David Kezerashvili controls the gasoline and oil business.

SPIEGEL ONLINE: The government, for its part, calls you an agent of the Kremlin. You made your fortune in Russia. How obligated are you to Russia?

Ivanishvili: Not at all. I'm obligated to my country. Ninety-nine percent of my spending goes to Georgia. I've had all the theaters renovated, as well as all the museums. I've had roads built, as well as 50 new schools. If that's how Russian agents behaved, my country would do well to hope for more of these spies. I haven't been in Russia in 10 years.

SPIEGEL ONLINE: The Caucasus is a powder keg. Iran, which could be the target of Israeli air strikes, is in your neighborhood. Azerbaijan is building up its military. Georgia's conflict with the separatists in South Ossetia and Abkhazia remains unresolved. Doesn't Georgia need stable conditions, instead of a leader who plans, as you do, to step down after two years?

Ivanishvili: A small country like Georgia has little influence on conflicts that must be resolved at the global level. Yes, we could become the victims of such developments, but a difficult regional situation doesn't justify one man's determination to hold onto power. It's clear to me that democratization is a very complicated process.

SPIEGEL ONLINE: How do you intend to solve the conflict with South Ossetia and Abkhazia?

Ivanishvili: We will resume direct talks with our brothers and friends. We will talk to Russia. We have to remember our history. We coexisted peacefully for a long time.

SPIEGEL ONLINE: Under what conditions could you accept independence for these regions?

Ivanishvili: The Georgian people will never agree to independence.

SPIEGEL ONLINE: German Foreign Minister Guido Westerwelle wanted to meet with you in Tbilisi in mid-March. Why did you turn down the invitation?

Ivanishvili: To be honest, he actually offended me a little. He invited me to the same meeting as the members of the pseudo-opposition who are in Saakashvili's pocket. Perhaps he was misinformed. But in the end it sent a fatal message, namely that the West doesn't care about our coalition. Westerwelle had barely left (the country) when hundreds of my supporters were questioned.

SPIEGEL ONLINE: The Russian oligarch Mikhail Khodorkovsky once challenged Russian leader Vladimir Putin. He was even richer than you are, but now he's in prison. Are you afraid of suffering the same fate?

Ivanishvili: I won't go back on my decision. I'm not afraid of prison, but there are even worse dangers. They're capable of anything. 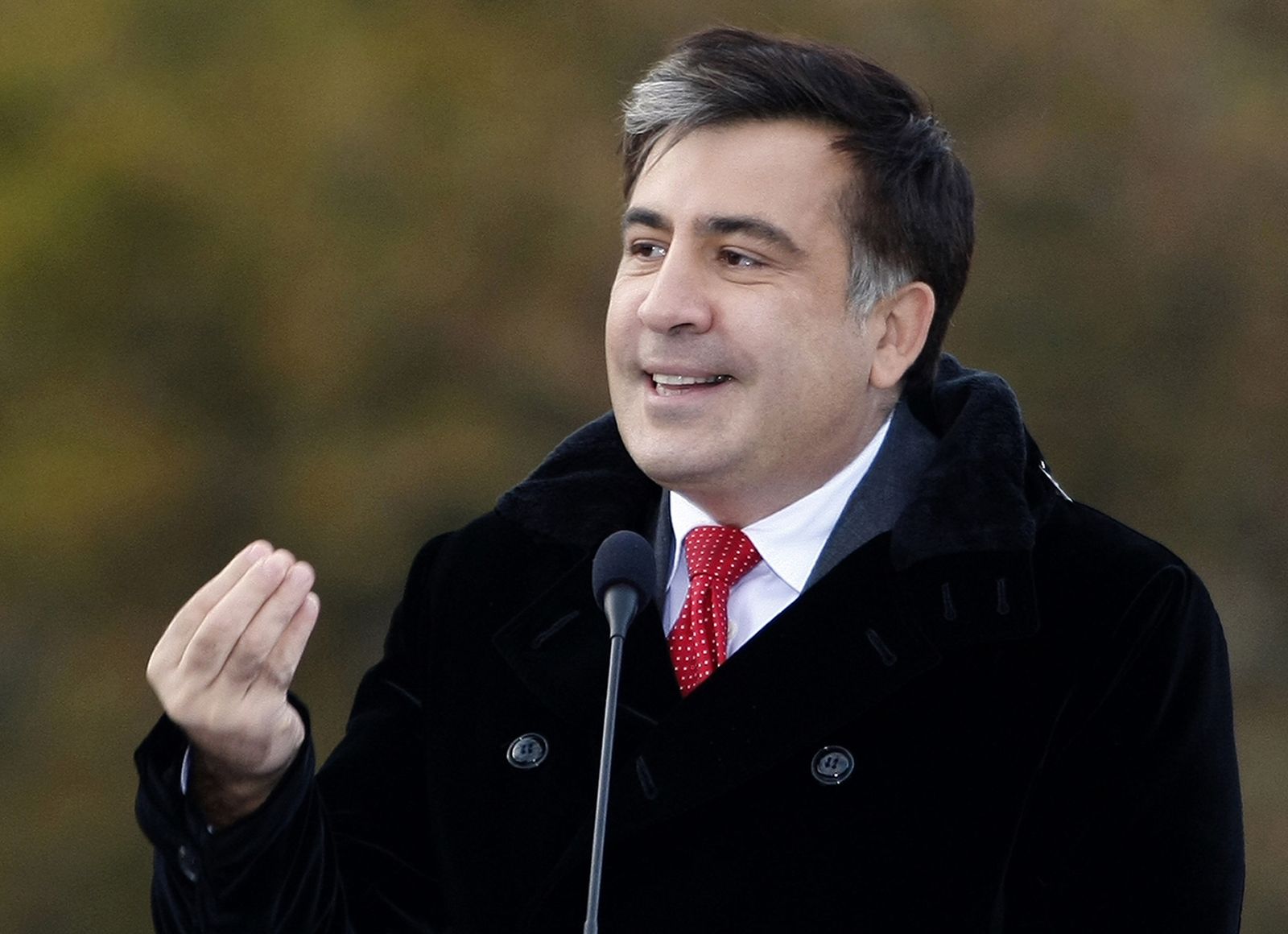 Georgian President Mikheil Saakashvili is seen at the unveiling of a monument to former US President Ronald Reagan in Tbilisi in November 2011. "I would like to ask the West to take a look at the real situation in our country and stop being fooled by Saakashvili," Ivanishvili said. "Europe and America should judge Georgia's leadership on the basis of their actions, not just their words and promises."