SPIEGEL: Minister Schäuble, how well do you get along with your American counterpart, Treasury Secretary Timothy Geithner?

Schäuble: Mr. Geithner is an excellent minister. We have a good personal relationship.

SPIEGEL: Nevertheless, he constantly criticizes government officials in countries that are achieving high export surpluses and not doing enough to stimulate their domestic economies. He's referring to you, isn't he?

Schäuble: It would appear that way. That's why I tell him again and again that I think his point of view is incorrect in this regard.

SPIEGEL: All the same, the value of goods Germany sold to the United States exceeded imports from that country by almost €14 billion ($19.8 billion) last year. Can't you understand that the American treasury secretary is concerned about this?

Schäuble: No, because since we introduced the euro in Europe, the determining factor is no longer US trade with Germany, but US trade with the totality of countries in the euro zone. And in that respect the balance of trade tends to be even. So what's the problem? After all, we don't complain about the export successes of individual American states.

SPIEGEL: But the German economy benefits from the fact that German industry has focused primarily on foreign markets and wages have hardly gone up in years. The Americans see this as unfair.

Schäuble: The German export successes are not the result of some sort of currency manipulation, but of the increased competitiveness of companies. The American growth model, on the other hand, is in a deep crisis. The United States lived on borrowed money for too long, inflating its financial sector unnecessarily and neglecting its small and mid-sized industrial companies. There are many reasons for America's problems, but they don't include German export surpluses.

SPIEGEL: The US government sees it differently. It wants to see German exports to the United States curtailed in the future once they reach a certain threshold. Will you give in to the pressure?

Schäuble: The proposal is not acceptable for Germany under any circumstances. If we were to introduce such measures, we would be restricting international competition. But for years we, together with the Americans, have believed that world trade needs to be opened up further. We should stick to that approach and, for example, press ahead with the Doha round to promote world trade. This would stimulate global growth far more effectively than a bilateral agreement on quotas.

SPIEGEL: Last week, the US Federal Reserve Bank decided to flood the economy with $600 billion in new money. Will this stimulate the economy as hoped?

Schäuble: I seriously doubt that it makes sense to pump unlimited amounts of money into the markets. There is no lack of liquidity in the US economy, which is why I don't recognize the economic argument behind this measure.

SPIEGEL: The US wants to depress the value of the dollar in this way, so that it can sell its products abroad more easily. In light of the ailing US economy, isn't that a completely reasonable strategy?

Schäuble: No. The Fed's decisions bring more uncertainty to the global economy. They make it more difficult to achieve a reasonable balance between industrialized and emerging economies, and they undermine the US's credibility when it comes to fiscal policy. It's inconsistent for the Americans to accuse the Chinese of manipulating exchange rates and then to artificially depress the dollar exchange rate by printing money.

SPIEGEL: The G-20 nations will meet in South Korea this week to discuss the condition of the world economy two years after the deepest financial and economic crisis since the war. When the crisis erupted, the international community reacted with astonishing unanimity. But now many countries are trying to achieve advantages by influencing their exchange rates. Are you worried about a worldwide currency war?

Schäuble: I don't believe in such belligerent terms, but it's obvious that the global economy is in a tough situation. This is due to the enormous national debts many countries have taken on while fighting the crisis. Reducing these deficits is the primary objective, as the G-20 countries decided at their most recent summit in Toronto, where everyone, including the United States, agreed to cut their deficits by half by 2013. We should stick to these decisions, and if we do we will be able to curb unrest in the markets.

SPIEGEL: But the United States isn't the only country that's responsible for unrest in the markets. The euro crisis also continues to smolder. The risk premiums for government bonds from the crisis-plagued countries Ireland and Greece have gone up again. How much longer will it take before Europe has to issue new state guarantees?

Schäuble: I'm not that pessimistic in this regard. Although the Irish have accumulated huge debts to bail out their banks, they are making good progress in cleaning up their economy. And I also have great respect for the Greek government's resolve. A few months ago, hardly anyone would have believed that the Greeks would manage to implement such a drastic austerity program. They're moving in the right direction now.

SPIEGEL: Conditions in Europe are not as orderly as you describe. Just two weeks ago, the European Council (the EU body in Brussels that includes the heads of state and government of the membber states) decided to introduce a new crisis mechanism for over-indebted euro nations. Are you satisfied with the result?

Schäuble: The Council's decisions are a great success. Only a few weeks ago, many predicted that France would never support Germany in its commitment to a European crisis mechanism. And that the French would be willing to change the European treaties to do so was seen as completely out of the question. But then Chancellor (Angela) Merkel and President (Nicolas) Sarkozy met in Deauville and achieved a historic breakthrough on both issues. It's completely in line with the approach we Germans have always supported.

SPIEGEL: You can't possibly believe what you're saying. Until recently, Germany was demanding automatic penalties for countries that violated the debt rules of the euro zone. That demand is now off the table.

Schäuble: In Europe, it just so happens that you don't always get everything you wish for. The overwhelming majority of EU members have made it clear that they would not accept automatic sanctions. Our response was: Instead of fighting for something you can't have, we'll try to achieve what's feasible.

SPIEGEL: That sounds like supreme statesmanship. But now there will be no change to the situation on the European Council, where the offenders and the watchdogs remain identical, as former constitutional judge Paul Kirchhof has said. The countries that don't have their budgets under control are helping to decide what penalties will be imposed for that. This isn't the way to come up with effective, prompt sanctions.

Schäuble: I disagree. It will be much easier in the future to enforce sanctions against deficit sinners. We will also be able to take preventive action earlier in the game. Besides, it didn't exactly advance the German position when the red-green government (the former center-left coalition of Social Democratic Party and Green Party that governed from 1998 until 2005), together with the French government, did serious, lasting damage to the Stability and Growth Pact by saying: The pact applies to everyone, just not to the two largest member states.

'The EU Wasn't Founded To Create Wealth for Financial Investors'

SPIEGEL: And now Germany has agreed to a permanent extension of the billions in bailout packages for Greece and Europe. Isn't this a high price to preserve the peace in the EU?

Schäuble: No, because we created a completely newly crisis mechanism, under which we achieved our most important demand: In the future, private lenders, that is, the banks and financial investors, will have a stake in the game when a country can no longer service its debts. Those who collect high risk premiums on government bonds will also have to bear that risk in the future when things get serious. This is an important principle: In the future, governments and investors will behave much more cautiously when it comes to new government debt.

SPIEGEL: Sounds good. But first the measures will have to be approved by the individual governments, on the one hand. On the other hand, it's completely unclear what the participation of private investors will look like.

Schäuble: We are in the process of working out the details within the German government and at the European level. It's already clear today that the new mechanism will not apply to old debt but only to new loans. I imagine that all bonds issued by euro countries will contain clauses in the future that specify exactly what happens to the claims of creditors in case of crisis.

SPIEGEL: Specifically, they will only get some of their money back.

Schäuble: In the event of a crisis. But the European Union wasn't founded to create wealth for financial investors. I imagine a two-stage process. If a country is having financial difficulties, the EU will launch an austerity and restructuring program, as it did in the case of Greece. In a first step, the maturities of those bonds that come due in this critical phase could be extended. If that doesn't help, private investors will have to accept a markdown on their claims, in a second step. In return, they'll receive guarantees on the rest.

SPIEGEL: And who will monitor the process, a European organization or the International Monetary Fund (IMF), which the Europeans already brought in during the Greek crisis?

Schäuble: For well-considered reasons, we decided at the time that we would involve the IMF. It proved to be a good approach. There is no other institution worldwide with a comparable amount of expertise on restructuring or a similarly strong reputation on the markets. We can also use this expertise in the future crisis mechanism. After all, we have to convince the financial markets that the new rules work.

SPIEGEL: You'll also have to convince your fellow Germans. When the euro was introduced, it was said repeatedly that German taxpayers would never have to pay for the debts of other countries.

Schäuble: Precisely because we want German taxpayers to be called upon as little as possible in a crisis, an organized debt restructuring involving the private investors is so important. But we should all recognize that keeping the euro stable is primarily in our interest. No one benefits from the common currency as much as the biggest European economy.

SPIEGEL: European Central Bank President Jean-Claude Trichet hasn't been won over by your crisis mechanism either. He fears that the prospect of losing money in a crisis would only scare away investors.

Schäuble: I disagree. We will develop a convincing crisis mechanism for the euro zone that increases the credibility of the common currency in the long run. We cannot achieve this goal if we simply extend the bailouts without changing the rules.

SPIEGEL: The markets aren't really convinced of this. The phrase "Merkel crash" was already making the rounds last week, because private investors are afraid of the risks that the European heads of state want to impose on them.

Schäuble: I have to question whether the movement on the markets was truly a consequence of our summit meeting decisions. Something else is more important: Europe has always made progress when Germany and France took the initiative. This is precisely what Sarkozy and Merkel demonstrated in an effective way by reaching an agreement on the crisis mechanism. That's the real signal coming from the most recent EU summit, and I'm sure that this signal will reach the markets sooner or later.

SPIEGEL: Mr. Schäuble, we thank you for this interview. 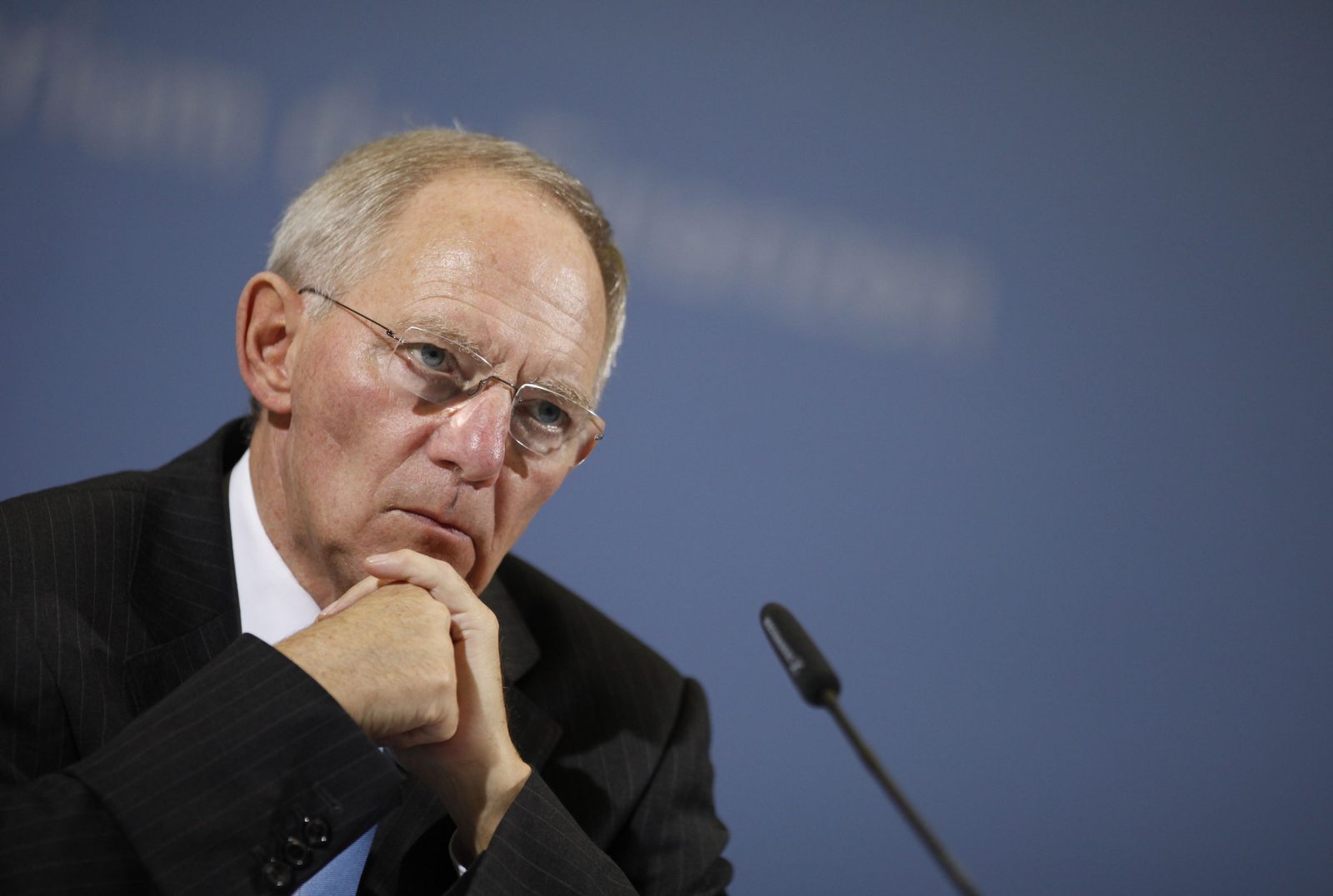