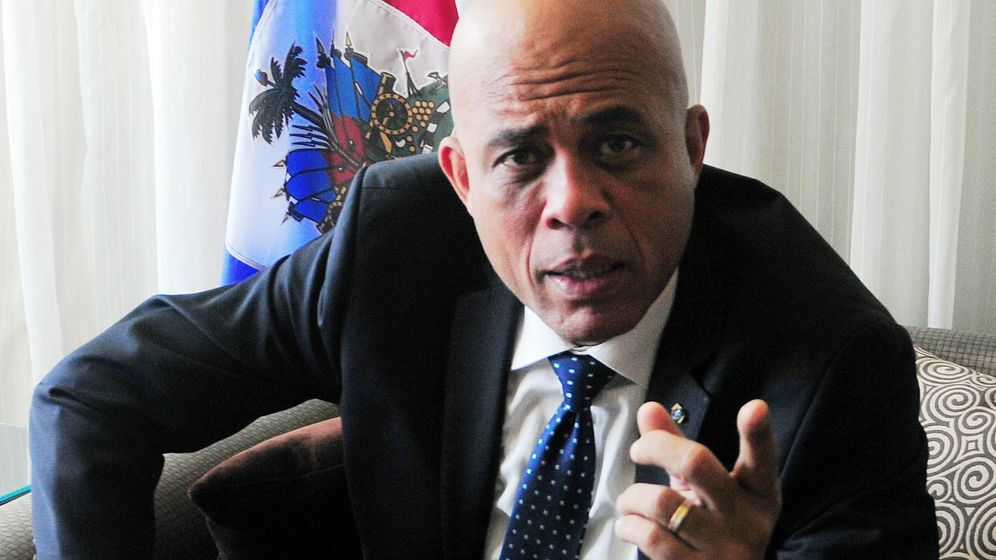 SPIEGEL: Mr. President, you have come to Germany to talk about the progress Haiti has made in the last few years, and to attract German investors to your country. Yet, just several days ago, thousands of Haitians were marching in protest over another delay in the elections that are three years overdue and were supposed to take place last Sunday (Oct. 26). How do you want to foster development without a functioning government?

Martelly: The truth is that we are making tremendous progress. Recently, we have encouraged big companies like JetBlue Airways to come to Haiti. We have a new international airport at Cap Haitien, new international hotels like Hilton and Marriott -- and they're not in Haiti by chance, but because they feel a change. We are working with them to secure their investment. We have new laws to fight corruption and money laundering. We are trying to establish a democracy. We are no longer the most insecure country in the region; we are the fifth most secure. Canada has lifted its travel warning for Haiti, and I have asked German Chancellor Angela Merkel to do the same. Now, about the elections: People are selling the idea that there is no election because of me ...

SPIEGEL: ... political opponents suspect that you would be happy to rule by presidential edict -- which is a likely scenario if the elections are not held before the lower chamber's term runs out in January.

Martelly: The elections are being blocked by the opposition. I have put in place five electoral councils. The first one was a permanent council, which was supposed to be established in 1987. But when I negotiated with the opposition, they proposed a new, provisory council. Then they wanted to exchange a few council members. Then they requested an entirely new council. I accepted all of this because I want elections. Now their last resort is to block the electoral law, because they just don't want to go to elections. This new movement that I am leading is very popular, and they know going to elections probably won't give them a chance to get re-elected. So they're aiming at chaos.

SPIEGEL: So when will the elections finally take place?

Martelly: My plan is to keep on negotiating with the opposition. If I don't get an agreement by Jan. 12, parliament will become dysfunctional. There is an article in the constitution which stipulates that when things go wrong, the president has to put things back in order. It is as simple as that.

SPIEGEL: Haiti is the poorest country in the region, and it is still recovering from the devastating earthquake that hit it in January 2010 and killed more than 200,000 people. The task of rebuilding your country is enormous. Where do you even start?

Martelly: We just need to organize ourselves. We used to be the richest country in the Western hemisphere. Today everything is weak in Haiti, the infrastructure, the institutions, the mentality. That's why I'm planning to make education free for every child. We use 5 percent of our budget for free education, and we collect 5 cents per minute from each phone call coming in from the Haitian diaspora, and $1.50 for each money transfer that the diaspora makes to Haiti. That adds up to another $50 million per year. It's not enough though -- one-third of our education budget is still missing.

SPIEGEL: After the earthquake, you said donor countries had pledged $12 billion in aid, but that Haiti only received $4 billion. Has the international community failed your country?

Martelly: I don't even want to talk about that money anymore, although we do ask those who promised to help to try and keep their promise. But we said to ourselves: Let's stop expecting donations, let's stop begging. Let's invest. That's why I'm doing what I'm doing here in Germany: I'm going around, trying to re-establish confidence. How do we create jobs for our people? We invite investors, we offer incentives, we create wealth for our people, and things start changing.

SPIEGEL: Haiti has been called the "Republic of NGOs," but the overwhelming presence of NGOs has not necessarily helped the country's progress. When will Haiti be able to function without them?

Martelly: We're making sure now that the NGOs are working with the government. We ask countries to channel their foreign aid through the government. Because if they give it to the NGOs directly they weaken our institutions. By doing that and by creating an institution where all the NGOs come to approve their projects, we have discouraged many of them. Some who were not there for Haiti, but for themselves, have left. So the situation is getting better.

SPIEGEL: The United Nations recently renewed the mandate of its peacekeeping mission in Haiti for another year. It has been blamed for introducing the deadly cholera epidemic four years ago, which has infected over 700,000 Haitians and killed more than 8,000. Do you still welcome its presence?

Martelly: The UN didn't force its way in. We created a situation that demanded that the UN be there to help us establish peace and security. Unfortunately, the cholera problem appeared. Now there are two types of reactions: trying to blame or trying to solve. Instead of making enemies, we are trying to solve this problem. The Secretary General has acknowledged the UN's responsibility, and he has pledged to help us. We'd rather have the UN help us fight the epidemic and improve our water and sanitation system than try to do it on our own.

SPIEGEL: What do you think of the efforts of human rights groups and cholera victims to bring on lawsuits against the UN in US courts?

Martelly: I won't tell a victim or somebody who has lost a member of his family to not go and talk to the UN or go to court and sue them. People can do what they want. But the government has the task to manage relationships, and I think we are doing a good job.