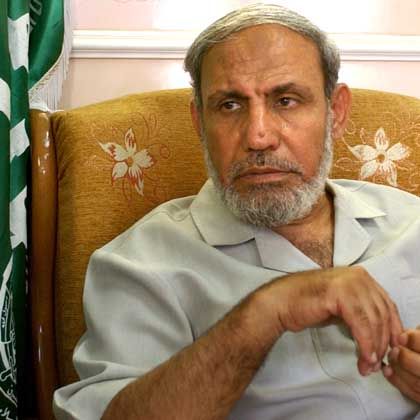 Hamas co-founder Mahmoud Zahar: "Our people can't distinguish between resistance and terrorism ... No one would have called Charles de Gaulle a terrorist."

SPIEGEL ONLINE: After heavy fighting, Hamas won control over the Gaza Strip last Saturday. But it's not clear what your party now intends to do. The assumption in the Western world is that Hamas wants to establish an Islamic state in Gaza. Is this true?

Zahar: Of course. We want to do that, but with full support of the people. At the moment we can't establish an Islamic state because we Palestinians have no state. As long as we don't have a state, we will try to form an Islamic society.

SPIEGEL ONLINE: How would a Hamas-led Islamic state look?

Zahar: There would be no difference from how it looks today, because our customs and traditions in Gaza are already Islamic. Marriage, divorce, daily business -- everything is Islamic. As soon as we have a state, then everyone will have their freedom. Christians will remain Christians, parties could be secular or even Communist.

SPIEGEL ONLINE: If an Islamic state is the ideal, why are there not more of them?

Zahar: If there were free and fair elections throughout the Arab world, Islamic forms of government would win everywhere. Islam is against the corruption, weakening, and materialism which have destroyed societies in Europe and America. Families are broken (in the West); there are AIDS and drugs. We don't have such things here.

SPIEGEL ONLINE: What will Hamas' future relationship to Israel be?

Zahar: We are ready to speak with everyone about everything. Of course we have to speak with the Israelis, de facto, for example over trade. We also have to speak with them about cross-border issues, like the movement of severely ill patients and protection from bird flu and how we can avoid environmental catastrophes. We won't discuss politics, because the Israelis have no political agenda with us. The political agenda of Condoleezza Rice and Ehud Olmert with President Mahmoud Abbas consists of trading kisses every two weeks -- but with empty hands. We will only talk about essential things.

SPIEGEL ONLINE: At the moment there are no attacks on Israel by Hamas' military wing. Is this a new doctrine?

Zahar: Yes, at the moment we have to deal with two enemies at the same time. Also, the Israelis have halted their aggression. That's a direct result of our attacks on Sderot (in Israel) -- the Israelis have suffered too much. Thousands of citizens had to leave (Sderot), and the Israeli government had to pay for their hotels. Factories and offices in Sderot also had to close.

SPIEGEL ONLINE: Palestinian President Mahmoud Abbas has called this a good moment to push forward with the peace process. Will Gaza and Hamas definitely stay out of any such talks?

Zahar: What kind of peace process is it? There will only be lots of chit-chat. Meanwhile the occupation will continue, and the Israelis will remain here to destroy our lives.

SPIEGEL ONLINE: In the West there is a fear that the Gaza Strip may become a playground for international terrorism. Is this danger real?

Zahar: Our people can't distinguish between resistance and terrorism. We're fighting for the liberation of our land from an occupation. When people in Europe had to fight the Nazis, they were honored, later, as freedom fighters. No one would have called Charles de Gaulle a terrorist.

SPIEGEL ONLINE: There has been talk in Israel about turning off electricity, water, and gas in Gaza. Could the people in Gaza starve?

Zahar: In that case Israel would have to open its borders. People wouldn't starve to death before violently storming the borders. Israel also loses $2 million in business income for every day the border stays closed.

SPIEGEL ONLINE: The international community plans to release all the aid money it has withheld from Palestinians for over a year to the Fatah government in the West Bank. Will the West Bank become a kind of luxury-Palestine, while the Gaza Strip starves?

Zahar: Fatah in the West Bank will receive money, and they will have to pass it on to Gaza. If it doesn't, it will lose Gaza forever. We would also have to search for alternatives. We have a very good image among people throughout the Arab world. If we want, we can get $5 million per month in donations from Egypt. We have also received money from foreign countries in the past -- $82 million from Kuwait, $50 million from Libya. I personally once brought $20 million from Iran to the Gaza Strip in a suitcase. No, actually twice -- the second time it was $22 million.

SPIEGEL ONLINE: What will improve for people in Gaza now that Hamas is in control?

Zahar: The good thing is that we can now collect information about our enemies and informants from foreign powers. We will look for Israel's spies.

SPIEGEL ONLINE: Last week there were street battles in the West Bank between Fatah and Hamas militias. Fatah maintained the upper hand. How will Hamas loyalists defend themselves in the event of any new fighting?

Zahar: Let me ask you: How have we defended ourselves so far against the Israeli occupation?

SPIEGEL ONLINE: With bombs and attacks?

Zahar: Exactly. But you said that, not me.

SPIEGEL ONLINE: The split between Hamas and Fatah has never been wider. Are you still in contact with one another?

Zahar: Yes, we speak to each other. But we're looking for the true Fatah so its members can take part in our new organization and plans for the future. The true, pure Fatah is the real loser (in this conflict) because its party in the West Bank is collaborating with Israel. In Gaza we have beaten those elements that collaborate with Israel. We have beaten everyone who represented an obstacle -- the ones who wanted to keep us from defending ourselves.

SPIEGEL ONLINE: The militant wings of Fatah and Hamas have been fully armed over the last few months. Are these weapons still in circulation?

Zahar: There are naturally very many weapons around now. Two years ago, one bullet in Gaza cost around €3.50 -- now it would cost 35 cents. The American aid money has been translated into weapons. Thank you, America!

SPIEGEL ONLINE: Isn't such a large number of weapons in the hands of militias -- some controllable, some not -- a huge security risk? What would happen if splinter groups started to shoot at each other?

Zahar: So far we haven't confiscated any weapons. If there are problems with splinter groups, we will disarm them and take the weapons for ourselves.