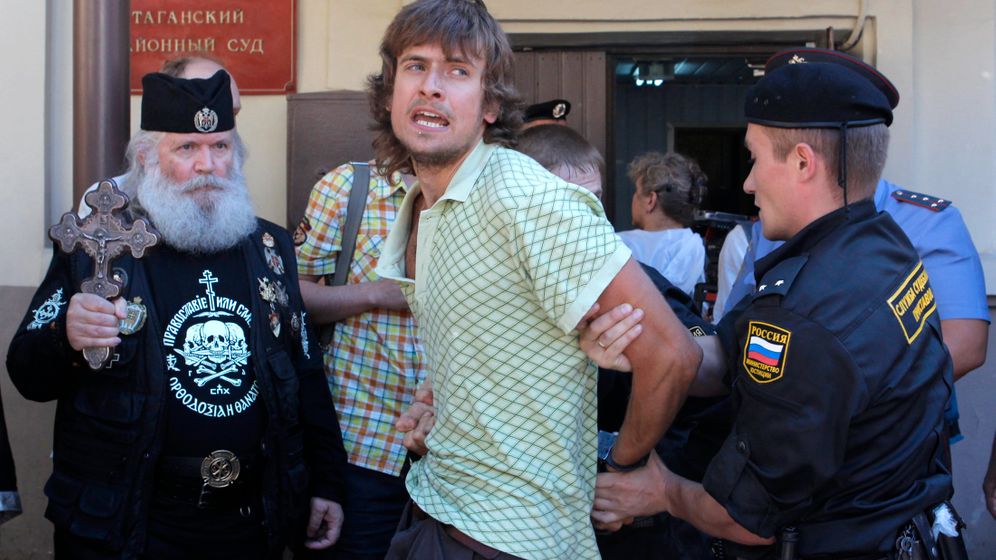 SPIEGEL is waiting at a sprawling industrial site somewhere in the enormous city of Moscow for Pyotr Verzilov, who is already an hour late. He's become difficult to reach.

Verzilov, 25, is the husband of Nadezhda Tolokonnikova, the most photogenic of the three members of the band Pussy Riot who are currently on trial on charges of hooliganism in relation to an impromptu concert they gave in Moscow's main cathedral. Verzilov met his wife when he was a philosophy student. The couple has a four-year-old daughter named Gera.

A text message arrives, and then suddenly Verzilov appears, a thin man with an unkempt beard and the harried look and good humor of a conspirator. "This is sort of a crazy day," he says in good English. "I have to take care of something inside, and then we can talk for 30 minutes. I have an interview with Australian TV after that, but then we'll have some peace and quiet. We'll take my car and talk for 40 minutes while we're stuck in traffic."

He disappears with some women. When he returns, he has a cup of coffee in his hand. During the interview, he speaks quickly and intently.

SPIEGEL: How is your wife?

Verzilov: I was able to visit her yesterday, for the first time in five months. I was turned down five times before that. The orders came directly from the former Moscow police chief and current interior minister, Vladimir Kolokoltsev. He had heard me in a radio interview and said: There's no way I'm going to let this guy into my prison.

Verzilov: She and the two others are role models for millions of Russians. It's amazing how well they are holding up under harsh prison conditions. They haven't lost their smiles, they're making political speeches in court, and they are courageous in the presence of power. Of course, they also sense the unbelievable worldwide support, and that gives them strength. 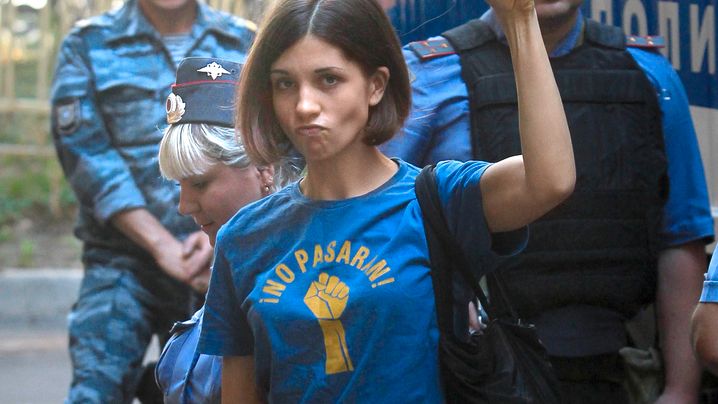 SPIEGEL: Are the three women in prison together?

Verzilov: They're being held in individual cells, in a special unit where they are monitored with video cameras 24 hours a day. And because they are Russia's most famous prisoners, security officials are worried that something could happen to them. But they are constantly being harassed in little ways, such as when the guards find private notes they've written, or their beds aren't made by 9:30 in the morning. They're doing their best to make life difficult for them.

SPIEGEL: What was it like to see your wife again?

Verzilov: It was very emotional. We were separated by a pane of glass and could only talk to each other through a telephone, but in the five months before that I had only seen her in the prison van or in the courtroom. The one hour and 33 minutes was incredibly beautiful.

SPIEGEL: You've written letters to each other in the last few months.

Verzilov: The attorneys passed them on. I kept her updated on what was happening in the West and in Russia, about the support for her cause, and about our daughter Gera.

SPIEGEL: You met this week with Madonna, who protested against the arrest of the members of Pussy Riot during her concert in Moscow by writing the band's name on her bare back.

Verzilov: She invited me to her hotel. She's great. And crazy. It was a fantastic thing that she did. She's worried about the girls. She said that she wanted to do something to make the girls feel her love. But she's always been a political artist. When she sang "Like a Virgin," Madonna also incurred the wrath of large segments of society and was criticized by the Church.

SPIEGEL: Where does your wife get the courage and the strength to endure?

Verzilov: She knows that it's an important message. This country, the Russian people, they're still stuck in the Middle Ages. My wife wanted to pit her feminist values and her protest against this reality. All three want to take Russia from the Middle Ages to the modern era. For five or six years, we've been involved in political protest campaigns with the Voina group, which we established together with other artists in 2007. Over the years, you learn that you have to fight in his country, and you become mentally prepared for the day when you have to be strong.

SPIEGEL: You were both very young. From what tradition did the Voina protests emerge?

Verzilov: Moscow conceptualism and Russian actionism of the 1980s and 1990s were important influences for us. But there were also philosophical inspirations. For me, they were mainly the classic philosophers of postmodernism, like Jacques Derrida, whereas for Nadezhda it was more the radical feminism of Judith Butler. We were very well prepared when it came to theory.

SPIEGEL: The Voina movement split in 2009, and there have been bitter accusations against you since then. There are claims that you posted videos of Voina activists on the Internet which led to their arrest.

Verzilov: Those are all lies -- brutal, old lies. It was a very nasty breakup at the time. We divided into two factions, the St. Petersburg and Moscow groups, because there were too many artistic differences. Both groups still call themselves Voina, hence the confusion. Our former colleagues from St. Petersburg keep sending around strange reports that no one believes.

SPIEGEL: How did Pussy Riot come about?

Verzilov: Pussy Riot was a direct response to a decision by (former President and current Prime Minister) Dmitry Medvedev not to run for reelection (as president). It was on Sept. 24, 2011, the day it became clear that the regime has no interest in change and only knows one direction: more authoritarian control. For 15 women, including Nadezhda, it was a wakeup call to do something and plan direct campaigns. The first videos appeared on the Internet only a few weeks later.

SPIEGEL: Who came up with the name?

Verzilov: These are collective decisions. The name is a reference to the Riot grrrl movement that arose in the United States in the early 1990s, based on a concept of feminine strength, not weakness. It sounded odd in Russia, and even the Western mainstream media has problems with it. Until recently, no English or American newspaper would have printed the word "pussy."

SPIEGEL: Didn't your wife expect there to be consequences, such as after the illegal concert on Red Square in January?

Verzilov: Never. Neither during the concert nor the performance in the church did anyone think that anything could happen. They didn't do anything criminal. Any honest lawyer in Russia will say the same thing. Pussy Riot believed that the worst it could get was a fine of 1,500 rubles, which is about €40 ($50).

SPIEGEL: When was your wife arrested? Was it in the church?

Verzilov: No, and that's very important in court. The security officials told the girls to leave the church, and the girls left. The police only arrived half an hour later, but they saw no reason to take any action against Pussy Riot. Only a week later, after the video had caused such a stir on the Internet, did the government decide to severely punish Pussy Riot.

SPIEGEL: And why Nadezhda? Why Maria and Ekaterina?

Verzilov: It was purely arbitrary. There were five of them in the church. They weren't wearing their masks yet when they entered the church, so their faces were filmed by the security cameras and the authorities knew who the five women were.

SPIEGEL: How is your daughter handling the situation? Does she know where her mother is?

Verzilov: My daughter tells everyone that Putin has locked her mother in a cage and that we have to find a way to get her out. She draws diagrams showing how we can go about doing this with bulldozers and buses, first by tearing down the prison walls and then by breaking open the cage.

SPIEGEL: What kind of Russia do you want for your daughter?

SPIEGEL: The prospects of that happening aren't exactly good at the moment.

Verzilov: But the trial has gotten everything going again. Pussy Riot have given a face to the Russian protest movement. They've made it onto cover pages, just like the Olympics. No one paid attention to protests here before this.

SPIEGEL: Are other campaigns in the works?

Verzilov: I can't say anything about that. There will be major rallies again in September, so we'll have to see what the fall brings. The fate of the protest movement also depends on whether or not Putin imposes a prison sentence on Pussy Riot. He's the only person directing things here. No one else in Russia has the power to make such a decision. It was Putin's personal decision to lock up the girls.

SPIEGEL: What sort of a punishment do you expect?

Verzilov: No one knows, because no one can see into Putin's head. He could send the world the message that Russia is not like China, but more like North Korea. In that case, he'll give the girls a prison sentence. Or he'll indicate that he is listening to Madonna, the Red Hot Chili Peppers and public opinion here in Russia, in which case he'll let them go and, for example, have them given a three-year suspended sentence.

SPIEGEL: What's next for you, after the verdict is handed down on Aug. 17?

Verzilov: We'll continue to fight, no matter what the verdict is. 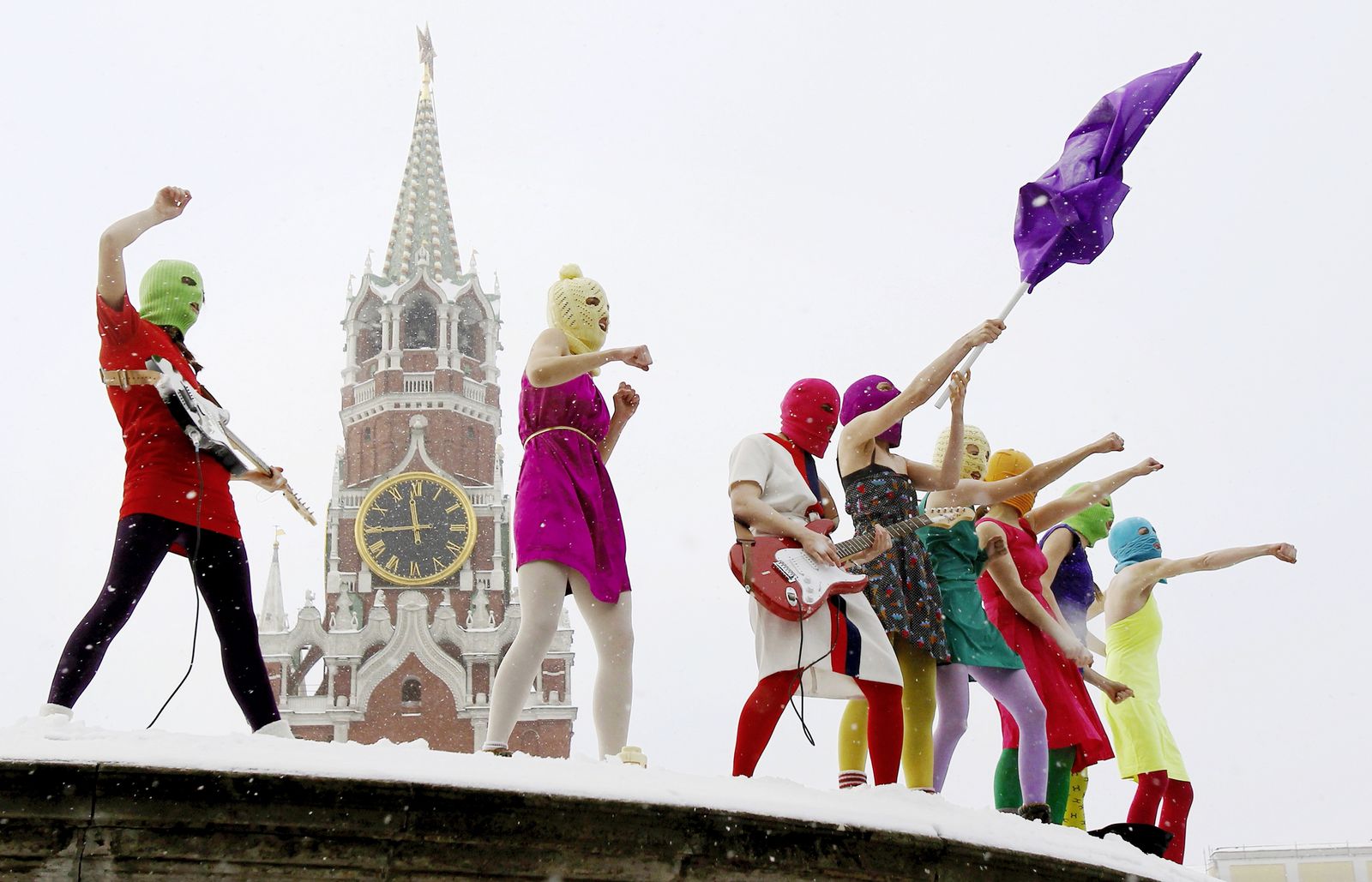 Pussy Riot made headlines with impromptu performances such as this one on Red Square in January 2012.