SPIEGEL ONLINE: Israel claims to be the only democracy in the Middle East. At the same time, there are things that seem to contradict democratic values, like the country's military censor.

Sima Vaknin-Gil: This is a common misconception. We are not a military unit. If you go to our examining room, you will see mainly civilians. We do not belong at all to the Israeli Defense Forces (IDF). The censor is based in the IDF, but we work under the auspices of the State of Israel.

SPIEGEL ONLINE: You are wearing the uniform of a colonel in the Israeli Army, but the chief of staff is not your commander?

Vaknin-Gil: The chief of staff does not appoint the censor, he cannot fire the censor and he does not influence his work. It is the defense minister who appoints the censor. But from the moment he assumes his position, the censor's decisions are only subordinated to the High Court of Justice.

SPIEGEL ONLINE: In criminal court cases the principle is this: If in doubt, back the defendant. Is the principle in your work that, if there is any doubt, you support state security and not the publication?

Vaknin-Gil: In 1988, the High Court of Justice laid forth an extremely rigid test. In order to censor a publication, there has to be an "imminent certainty of actual harm to state security." That same ruling mentions that in any case in which there is a direct conflict between the freedom of the press and state security, then state security will prevail. But our approach is very liberal. In the past, I served in intelligence -- and I wish that our enemies would publish some of the things we approve; it would serve me greatly.

SPIEGEL ONLINE: How can a specific publication endanger state security?

Vaknin-Gil: Our enemy is the intelligence officer sitting in Damascus and reviewing the Israeli media and Internet. I will censor anything that comes across my desk that I believe will be useful to the enemy for purposes of gathering valuable information. It can be one letter, one word, one line. At times, I regret, it can be more -- but we aim to keep our intervention to a minimum.

SPIEGEL ONLINE: How many items do you receive and how many of them do you censor?

Vaknin-Gil: We receive thousands per month. An item can be one headline in a newspaper or a complex article which might take several months to review. Out of the thousands of items, 80-85 percent are returned without being touched. Out of the remaining articles, between 10-15 percent are returned to the publisher with what we call "specific disqualifications." Often it is only one sentence that we ban. Only up to 1 percent of all the items submitted to the censor are totally disqualified.

SPIEGEL ONLINE: What can a journalist do if he thinks you banned information in an article for no good reason?

Vaknin-Gil: According to a memorandum of understanding signed by the Defense Minister and the Editors Committee of the media in Israel, the first step is an arbitration committee, also known as the "Committee of Three." It is headed by a representative of the public -- in most cases a judge. On one side, the judge has a media professional -- always from a different form of media -- at his or her side. For example, if the arbitration were to involve a newspaper, then the member of the committee would be from radio. In most cases, the media professional favors freedom of expression. The third element in this arbitration committee is a representative of one of the security institutions -- who, by definition, does not need to see things the way I do. But, of course, I have an easier time with him because we are both wearing army uniforms.

SPIEGEL ONLINE: How often are you taken to arbitration?

Vaknin-Gil: It used to be between six to eight times a year. But in the past 4.5 years, since I have been in my position, it has only been 1.5 times a year -- which is also an indicator of the degree to which we are balanced. There are generally two types of instances that can lead to arbitration. Either we disqualified an item and the media didn't like the decision. Or if I tell you not to publish something and you do anyway and I decide to seek punishment. The penalties are really minor: They can include reprimands or fines. But the best deterrent effect is the fact that the media in Israel doesn't like to be perceived as breaching censorship.

SPIEGEL ONLINE: There is even self-censorship among Israeli journalists: Sometimes they do not hand in certain information to the censor because they themselves think that its publication would harm state security. In the case of the killing of Hamas weapons dealer Mahmoud al-Mabhouh in Dubai, for example, Israelis journalists know much more than they have published.

Vaknin-Gil: Without reference to the specific event, what you are describing is what I call the Israeli consensus. I believe that Israeli journalists are very responsible. Some of them are even more security-oriented than we are at the censor's office.

SPIEGEL ONLINE: What can the security apparatus do in order to prevent the publication of certain information? Does Meir Dagan, the head of Mossad, Israel's intelligence agency, sometimes call you?

Vaknin-Gil: If the head of the Mossad thinks that I am about to make a grave mistake in approving an item, he can send his representatives or speak to me directly. That has happened in the past. But when I say to him, I am sorry, but I am not convinced that this story will cause harm to state security, then he has no further legal instance to impose his request. By the way, if the arbitration committee does not accept my position, I cannot do anything. But if a newspaper doesn't agree with the arbitration decision, it can challenge it at the High Court of Justice. So there is an extra legal step exclusively reserved for those representing the freedom of the press.

SPIEGEL ONLINE: But many Israeli journalists currently complain about suppression of the freedom of the press. An ex-soldier was put under house arrest for allegedly stealing secret army documents and leaking them to Uri Blau, a reporter with the Israeli daily Haaretz. For more than four months the media was not allowed to write about it due to a gag order. Is that an appropriate measure in a democracy?

Vaknin-Gil: It is important to point out that the gag order was imposed by a judge and not by the chief censor. There is a big difference there. The chief censor only weighs a potential harm to the state's security. In a gag order, much broader aspects are taken into consideration -- for example, the secrecy the authorities are aiming to give to an investigation in order not to harm it.

SPIEGEL ONLINE: Do you think the gag order should have been lifted earlier?

Vaknin-Gil: Yes, and I voiced this opinion internally -- Israel's international image should have been taken into consideration, especially after the foreign press reported about the case and the gag order. The reports in the foreign press made Israel look like a Third World country.

SPIEGEL ONLINE: Haaretz reporter Blau published some of the documents arguing that the army had, contrary to a ruling of the High Court, killed Palestinian suspects instead of arresting them. Did Blau hand in the article to the censor?

Vaknin-Gil: Blau's original article was subjected to censorship. It was approved by us with specific corrections -- counter to the stance of all defense authorities, by the way. But in the view of the censor, the published article did not harm the security of the State of Israel.

SPIEGEL ONLINE: What sense does a national censorship office make at all when things are published in the foreign press?

Vaknin-Gil: The intelligence value of an item published outside Israel is lower in the eyes of our enemy than an article written by a renowned Israeli security expert like Amos Harel in Haaretz or Ronen Bergman in Yediot Aharonot. The enemy attributes a higher credibility to articles published by the Israeli media.

SPIEGEL ONLINE: I disagree. I think some of the articles SPIEGEL published for example on Gilad Shalit, the soldier who was kidnapped by Hamas, were much more accurate than what our Israeli colleagues wrote.

Vaknin-Gil: In this specific case your are right. SPIEGEL is perceived as having integrity. But in most cases the enemy attributes more credibility to an article that is published by a well-known Israeli reporter. So we can live with most of the foreign reports. Even if secret information is published by the foreign media, we can force the Israeli media to write "as reported in the foreign media."

SPIEGEL ONLINE: In the four and a half years I have worked in Israel as a correspondent, I never handed in an article for approval, it is against my journalistic principles. But I have never received a phone call from you, either. Was I lucky?

Vaknin-Gil: Don't think we do not know what you have published. If I thought you were harming state security you would get to know the "other side" of the censorship. When you report to the German reader, you usually would not describe what this or that army unit did yesterday. Your reports pertain to the political issues and only occasionally to military issues. That's why we did not harass you. When you leave Israel at the end of your time as correspondent, I would be happy if you said: This country is really the only democracy in the Middle East. 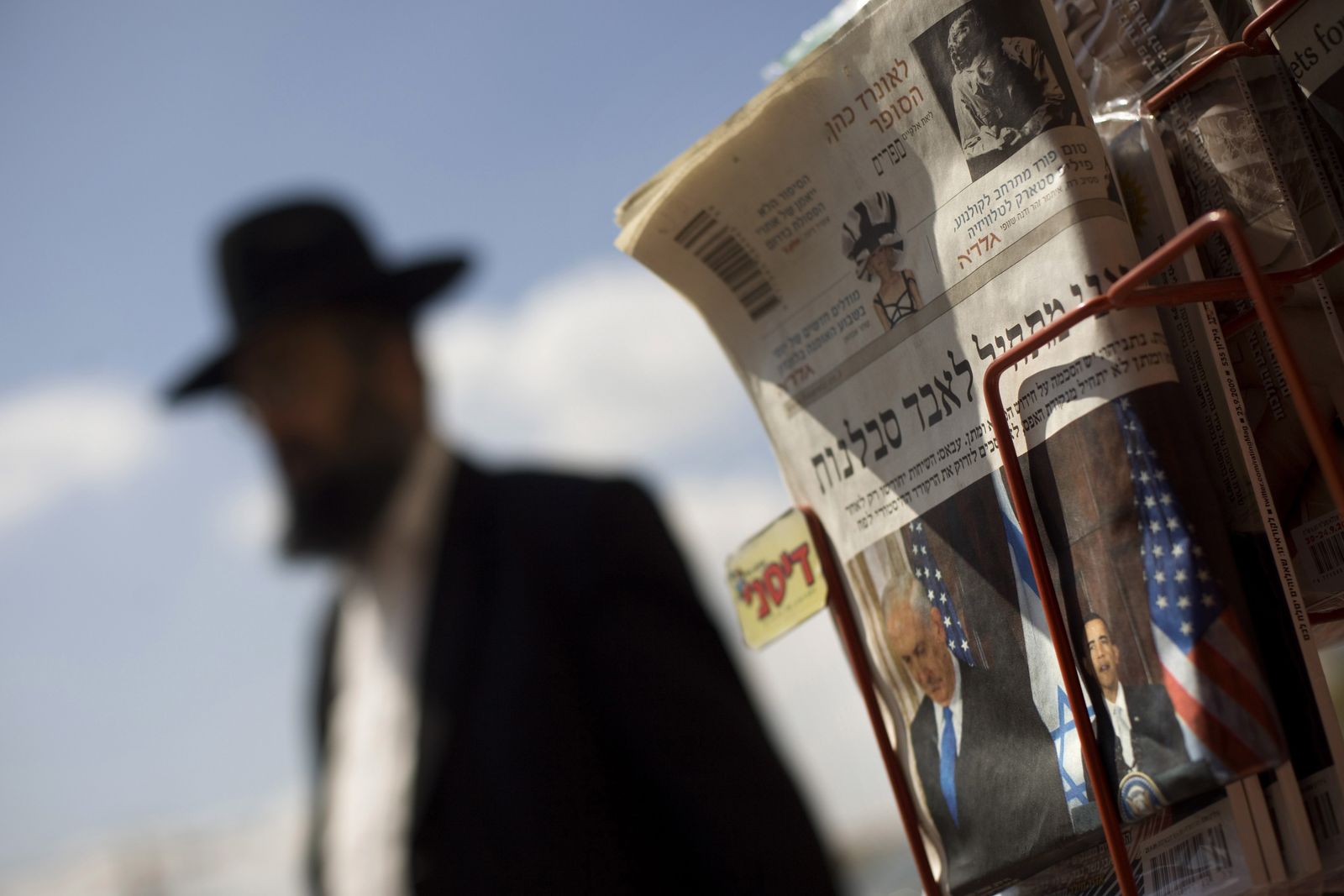 Israeli chief censor Sima Vaknin-Gil: "Some of them are even more security-oriented than we are at the censor's office."