SPIEGEL: Israeli Prime Minister Benjamin Netanyahu is meeting George Mitchell, the United States' special envoy to the Middle East, this Monday in London before coming to Berlin on Wednesday. Will we see a very confident and relaxed Benjamin Netanyahu or a politician whose hardline policies have put him under a lot of pressure?

Dan Meridor: I don't think we are hardline. But if you'd like to characterize our government in this way, you are entitled to do so. But please take into account the fact that the position of Israeli's prime minister is unique. The Israeli prime minister is confronted with problems you don't see as head of the government in Switzerland, Norway or even Germany. These are questions of a different scale and magnitude: a dramatically changing society, the absorption of immigrants and borders that are not yet defined and are challenged all the time. These are questions of the legitimacy of the state -- and its very survival.

SPIEGEL: And because of that ...

Meridor: ... you need to be relaxed and very stable as an Israeli politician. You can't try to meet all the expectations of the Israeli opposition, foreign powers or journalists. If I may say so, the issues are too serious to be taken at the press level.

SPIEGEL: What does this mean for the peace process and your government's decisions?

Meridor: We face many challenges that we did not create. Our government came in after a very serious attempt by (former Prime Minister Ehud) Olmert to reach an agreement with the Palestinians that offered more than anybody in Israel had ever done. He did not get a positive response. Perhaps Abu Mazen (ed's note: Abu Mazen is the name most commonly used in the Palestinian Authority for Palestinian President Mahmoud Abbas) reacted the way he did because he doesn't control Gaza, where 40 percent of the territories' population lives and into which he cannot even travel. Perhaps Abu Mazen wants even more than just the Palestinian state; but there is nothing more to give. It was Olmert's -- and not our government's -- offer. Surely, nobody expects Netanyahu to offer more than what Olmert offered.

SPIEGEL: Are you not happy with the Palestinian leadership?

Meridor: I don't know. The question is whether Abu Mazen can deliver. Is there a real leadership in the Palestinian camp now? Do we have a partner for a peace process?

SPIEGEL: You blame Palestinian intransigence. Western leaders are, of course, demanding that the Arab side compromise on some issues. But they are also putting pressure on Israel to make concessions, as well, especially when it comes to its aggressive settlement policy in the West Bank.

SPIEGEL: You don't regard new settlements in the occupied territories as being a major stumbling block in the peace process?

Meridor: That's exactly why we aren't building new settlements. We haven't approved any.

SPIEGEL: You are sidestepping the issue. US President Barack Obama wouldn't urge Israel to stop its settlement policies if he didn't have a reason to do so. He has demanded an immediate freeze to any expansion, but your government has chosen not to comply. Some of your colleagues in Israel's cabinet are even encouraging the most radical settlers to build new, completely illegal outposts. Just recently, several ministers visited these places and delivered provocative speeches.

SPIEGEL: But there is no question that your government is providing financial assistance to the ongoing, provocative expansion of existing settlements. This makes it impossible for the Palestinian leadership to negotiate with you.

Meridor: That's one of your misperceptions. Olmert made an agreement with the administration of former President George W. Bush according to which the Americans accepted that there would be construction within existing settlements. This has been admitted by the deputy national security adviser of the US, and it was recently published in the Wall Street Journal. That did not stop the Palestinians from negotiating with us over three years.

SPIEGEL: Well, the fact is that there is now a new American president who is urging Israel to make this concession. Why is it so difficult for your government to show some restraint and agree to the building freeze, when this is something that the US, the European Union and the United Nations are demanding?

Meridor: We don't feel pressured by Obama. We haven't built any new settlements, so we are fulfilling the understanding. Now there are some ongoing discussions about a compromise.

SPIEGEL: A freeze for the next 12 months?

Meridor: I can't comment on details at the moment because I'm very involved in these things. But, concerning the Palestinians, we are ready to negotiate. We don't want to wait. We said that from day one of our government. But the problem with the Palestinians is a serious one. You can't resolve it unless there is a readiness on their side to accept that, along with a Palestinian state, there is a Jewish state, too.

SPIEGEL: Fatah and its leadership have done it.

Meridor: No, they haven't -- at least not yet. I hope they will. They will only deserve their own state -- something which has never been offered to them in history -- if they do it.

SPIEGEL: What are you willing to negotiate on? Prime Minister Netanyahu needed months before he grudgingly accepted the two-state solution at all. And he didn't use the expression "Palestinian state" until June 14. And then there's the fact that he has announced a number of preconditions, such as that Jerusalem must remain the undivided capital of Israel.

Meridor: Again, not true. Netanyahu never set these positions as pre-conditions, although these are our strong positions in the negotiations process. Should we not have a position on Jerusalem?

SPIEGEL: Of course you can have a position. But you can't make this position a precondition. In a number of international accords, Israel agreed that the final status of Jerusalem would be part of the negotiations.

Meridor: Again, not accurate. These are not preconditions. The Old City with the Jewish Quarter and the Wailing Wall will never be part of an Arab state; all the major Israeli parties share this conviction. There could be a compromise on land in Judea and Samaria (ed's note: these areas are the biblical names for what is now referred to outside of Israel as the West Bank). But all Israeli governments have agreed on having a united Jerusalem. This is our clear position, but we can negotiate about Jerusalem. There are no preconditions, as you claim.

SPIEGEL: How much of the occupied land would you be willing to give back? By allowing the settlements to grow, aren't you more or less making a viable Palestinian state impossible?

Meridor: The final borders are open for discussion. But we will not return to the line of 1967 -- that's for sure. It was agreed in both President Bush's letter to Olmert and in the Geneva understandings that the settlement blocks would be part of the State of Israel in the final agreement.

SPIEGEL: Put yourself in the shoes of a Palestinian leader: Would you be satisfied with the fractured state that Netanyahu is offering -- which doesn't include an army, control of your air space and East Jerusalem as your capital?

Meridor: I'd accept it. You know, I would like the whole land to be my land -- because I think it's mine and they think it should all be theirs. But I changed my mind over 15 years ago: We need to divide it, and both sides have to accept this. For a long time already, we had a difficult, but very positive process.

SPIEGEL: Are you saying that there is no longer any peace process?

Meridor: We hope it will resume, and we have some hopeful signs. But, all in all, it has become more difficult over the years because of the introduction of religion into this conflict. Arab rulers hated us in the past, but they did it because of nationalistic ideas. Since the (1979) revolution in Teheran, we hear a different tune: The Iranians, Hezbollah and Hamas fight us in the name of religion. This is very bad because people can compromise, but gods never compromise.

SPIEGEL: Are you sure that the Iranians introduced religion into the conflict? Isn't Jerusalem about religion, too? Aren't the ultraorthodox settlers claiming the Holy Land for themselves because of their God-given rights?

Meridor: You can't compare these things. The previous pope (John Paul II) said that Jerusalem is sacred to all religions but was promised to one people. We have no religious claim on Jerusalem; we have a national one. Jerusalem is our capital. We shouldn't talk about the settlements 90 percent of the time and neglect the most important problems ...

Meridor: This is certainly a cause of serious concern.

SPIEGEL: John Bolton, the former US ambassador to the UN, recently claimed that Israel will attack Iran's nuclear sites by the end of the year. Although the well-informed Israeli newspaper Haaretz did not give an exact timetable for such an attack, it did report that Netanyahu has made the decision to bomb Iran. Is this true?

Meridor: I don't think the prime minister has made up his mind in the way it has been described. But I don't want to get into details ...

SPIEGEL: ...which is a pity. And that's because you -- as the minister of intelligence and atomic energy and a member of Netanyahu's inner circle -- should know.

Meridor: Let me say this much: I think Iran shouldn't be allowed to become a nuclear power. This is not only an issue for Israel but for the whole world. It would be a victory for the extremists over the moderates in the Arab world. This worries the moderate Arab countries more than anything else. It would change the equilibrium in the Middle East; it would mean the end of the (Nuclear) Non-Proliferation Treaty; it would be a serious threat for us. One shouldn't forget that Iranian President (Mahmoud) Ahmadinejad has repeatedly spoken about the illegitimacy of Israel and its destruction. But we should concentrate now on harsher sanctions against Teheran, with America leading the way. And we are counting on the Europeans to follow with serious actions. This includes Germany, which is one of Iran's very important trading partners.

SPIEGEL: But what if the sanctions fail to divert Iran from its present course? Will Israel attack alone? Or only with the consent of the US?

Meridor: I don't want to go into this. But we all see the clock ticking -- and Netanyahu knows what he's doing.

SPIEGEL: At the moment, he is much more popular in Israel than he is abroad. Are you worried that Netanyahu might get a somewhat cool reception in Berlin?

Meridor: No. Germany is one of Israel's best friends. And, all in all, I am quite optimistic that things in the Middle East will develop in a positive way. There's something in the air.

SPIEGEL: Really? Could Marwan Barghouti, the intifada leader who is currently serving five life sentences for murder in an Israeli jail, be released and become a respected Palestinian leader and partner for peace? Many think that he has become a moderate, and the Fatah Party's congress held in early August voted him into its Central Committee with the third-best results of any candidate.

SPIEGEL: Many people think that both the Palestinians and the Israelis have made peace with the status quo and are not prepared for any more painful compromises. Are they right?

Meridor: For us, the status quo is a bad option. We need to change it -- and take risks. But we must take into account the lessons we've learned from the past. 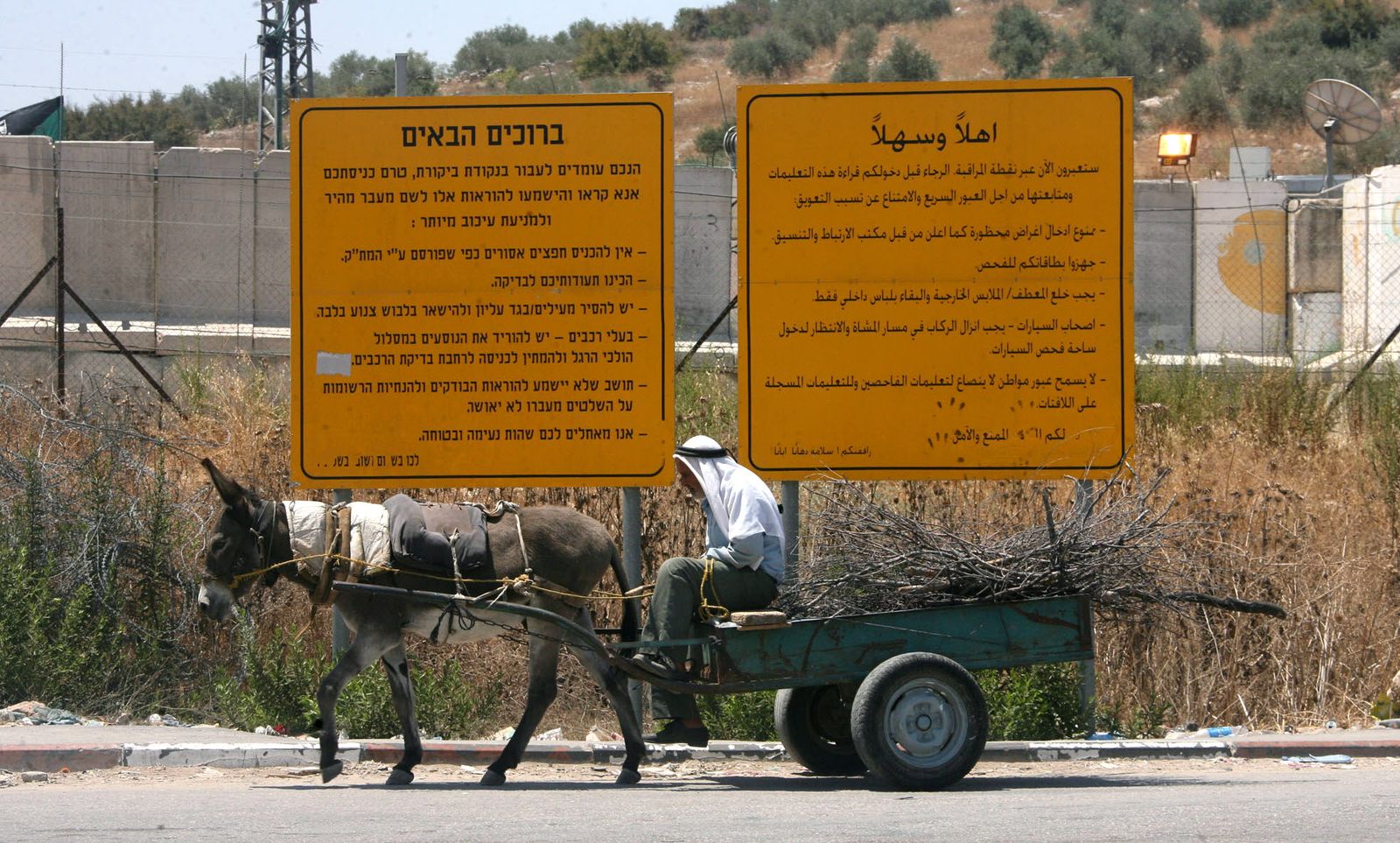