SPIEGEL: Senator McCain, do you still use your cell phone?

McCain: Yes, because I don't say anything that I am concerned about being publicized.

SPIEGEL: Can you understand why German Chancellor Angela Merkel was so upset by the revelation that her cell phone had been monitored?

McCain: Yes, absolutely. A certain amount of eavesdropping goes on amongst friends. We all know that. But it happens to be my personal opinion that the German chancellor's personal cell phone is not something that should be eavesdropped.

SPIEGEL: What did the National Security Agency hope to learn through their eavesdropping on Merkel's cell phone? There are experts that say the US would naturally be interested in information regarding national security, for example where Chancellor Merkel stands on troop withdrawal in Afghanistan or stricter economic sanctions against Iran.

McCain: I think we could find that out in many other ways, especially amongst friends. You don't have to invade someone's privacy in that fashion in order to obtain that information.

SPIEGEL: Why did the NSA do it then?

McCain: The reason I think they did it is because they could do it. In other words, there were people with enhanced capabilities that have been developed over the last decade or so, and they were sitting around and said we can do this, and so they did it.

SPIEGEL: Are the intelligence services out of control?

McCain: There has not been sufficient congressional oversight, and there has been an absolutely disgraceful sharing of information that never should have taken place. For many years, we had an absolute provision that any classified information, which was going to be shared, is based on need-to-know information. I was a Navy pilot and had Top Secret clearance because I was in a squadron that in case of war with Russia would carry nuclear weapons. But that did not mean that I was privy to everything to do with all of our war plans in case of a nuclear war.

SPIEGEL: That means that you only knew what you absolutely had to know.

McCain: Yes. Then along came 9/11 and we said, "Oh, one of the reasons why we didn't know about 9/11 is that we didn't do enough information sharing." So now we have a private in the Army with access to most secret cables.

McCain: And now we have a contractor employee, not a government employee, who has access to information which is, when revealed, most damaging to the standing prestige of the United States and our relations with some of our best friends. Why did Edward Snowden have that information? And what are we doing as far as screening people who have access to this information? It's outrageous, and someone ought to be held accountable.

SPIEGEL: Who must be held accountable?

McCain: The head of the NSA, the president of the United States, the Congressional Intelligence Committees, all of these contractors we pay that were responsible for performing the background checks. There should be a wholesale housecleaning.

SPIEGEL: Should Keith Alexander, head of the NSA, resign?

McCain: Of course, they should resign or be fired. We no longer hold anybody accountable in Washington. The Commandant of the Marine Corps fired a couple of generals because of failure of security at a base in Afghanistan. Tell me who has been fired for anything that's gone bad in this town.

SPIEGEL: Do you think it's conceivable that President Barack Obama didn't know anything about the monitoring of Chancellor Merkel's cell phone?

McCain: It's conceivable that he didn't know it, but the fact remains that he should have known it. Responsibility always stops at the president's desk.

SPIEGEL: How should the president have reacted to the revelations that were made public?

McCain: Knowing how angry Angela Merkel was, he should have apologized. You know, I've had to do that on numerous occasions in my life. The pain doesn't last very long.

SPIEGEL: In your opinion, how should intelligence services define the lines that must not be crossed?

McCain: The limit should be the potential damage to relations with that country. In other words, is it worth the collateral damage that could result in those techniques being revealed? What would be the reaction of our friends to it?

SPIEGEL: Since Merkelgate there has been much discussion over whether countries can be friends and whether the United States is a real friend to Germany.

McCain: Friends spy on friends. We all know that, but there have been certain boundaries. Those boundaries were probably, to some degree, there because we didn't have the capabilities we have now. But when you go to the point where you invade someone's privacy, the leader of certainly Europe, if not one of the most foremost leaders in the world, Angela Merkel, then it was a mistake.

SPIEGEL: Merkel's cell phone had been tapped starting in 2002. Is this monitoring a consequence of the Sept. 11, 2001 attacks?

McCain: Without Sept. 11, I don't think we'd be having some of these discussions. We know that if we had detected that phone call from abroad to somebody in San Diego (where three of the perpetrators lived), we might have been able to prevent 9/11. There are some ways of eavesdropping that not only are legitimate, but I think are important to securing this nation, and that includes monitoring phone calls from overseas. But again, that's different from eavesdropping on the cell phone of the chancellor of the Federal Republic of Germany.

SPIEGEL: What could the White House do to limit the damage?

McCain: Well, I'm not president of the United States, and I hesitate to tell the president what to do, because I tried and am not president of the United States. But I certainly would just render an apology. I would be appointing a commission of credible people here and around the world, like former Defense Secretary Robert Gates and ex-Secretary of State Condoleezza Rice, and ask them to make recommendations as to what our policy should be.

SPIEGEL: In Germany there is a discussion about the possibility of granting Edward Snowden asylum. To what extent could this damage trans-Atlantic relations?

McCain: She would never consider such a thing. We're too good friends.

SPIEGEL: But if she were to do it?

McCain: Well, I hate to get into hypotheses, but Mr. Snowden took an oath that he would not take actions that were harmful to the United States' national security interest. Anybody who would take him then believes that the United States of America is not a country of laws.

SPIEGEL: What would be the consequences for Snowden if he were to return to the United States?

McCain: He'd go on trial, but he's not coming back.

SPIEGEL: Even next year when his asylum in Russia expires?

McCain: Never. President Vladimir Putin will grant him asylum indefinitely. The Russians know if they send him back that that's a lesson to other people who might defect. I'm sure that Mr. Snowden has told them everything that he possibly knows.

SPIEGEL: He denies that and says that he did not take the NSA documents to Russia.

SPIEGEL: Granting Snowden asylum has helped Putin portray himself as an important player on the world stage. This comes after his clever intervention in the Syria conflict.

McCain: It's one of the most shameful chapters of American history. First, the president of the United States says he is going to attack a country which is in violation of a red line that he himself had drawn. Then the president decides to go to Congress. Finally, his secretary of state gives an offhand remark that chemical weapons have to be eliminated and Russian Foreign Minister Sergey Lavrov, the wily old fox, recognizes the opportunity and takes over. Now we are treated to the most incredibly bizarre scene where Russians are helping to categorize and eliminate chemical weapons, while at the same time flying in plane loads of conventional weapons, which are used to kill Syrians.

SPIEGEL: Are you disappointed in Europe's reluctance to get involved in the Syrian crisis?

McCain: The fact that our friends in Germany, the most powerful nation in Europe, basically played no role -- and not for the first time -- is also shameful.

SPIEGEL: In America there also wasn't a majority that supported a military strike in Syria.

McCain: We don't have a president who leads. We don't have a president who would tell the American people that what's happening in Syria is a regional conflict, which will sooner or later involve the United States. Al-Qaida has found a comeback. Iraq is unraveling. Jordan is de-stabilized. Lebanon is under severe attack. Hezbollah is fighting in Syria with its 5,000 troops. This has turned into a regional conflict, which directly affects national security interests. The president of the United States has never told the American people that.

SPIEGEL: One can also see it from a different angle. Obama may achieve the destruction of chemical weapons in Syria without the use of deadly force. He is attempting to negotiate an agreement with Iran to stop their nuclear program. Both would be achievements of historical proportions.

McCain: So suppose that tomorrow we got rid of the chemical weapons in Syria. Does that change the slaughter of now up to 110,000 people? The problem in the Middle East today is a regional conflict, which is spreading throughout the region -- from Libya all the way across the Middle East into the Arabian Peninsula. And I am very skeptical about the situation with Iran. I've seen this "confidence-building measures" movie many times. The reality is you have a nation, Iran, embarked on spreading its brand of Islam throughout the Middle East and the world. They are still dedicated to wiping Israel off the map.

SPIEGEL: You wouldn't compromise in any way with Iranian President Hassan Rouhani?

McCain: We don't need any confidence-building measures which are going to include easing some of the sanctions. That's the Iranians' goal. They either stop the enrichment or they don't.

SPIEGEL: Is the case of Edward Snowden also an issue where such a hard line approach is necessary? He says that telling the truth can't be a crime. What do you say to Snowden?

McCain: That's an interesting interpretation that he has. No one drafted him or forced him into his job. He made a pledge that he wouldn't reveal information that he gained while working there, and he violated that pledge. That's not the way that the system should work. We have a reason to keep certain things secret that the enemy, who are dedicated to our extinction, might gain advantage from. Al-Qaida is still out there. It's growing, and they are still dedicated to attacking and harming the United States of America. What Mr. Snowden has given them is a greater ability to do that.

SPIEGEL: Senator McCain, we thank you for this interview. 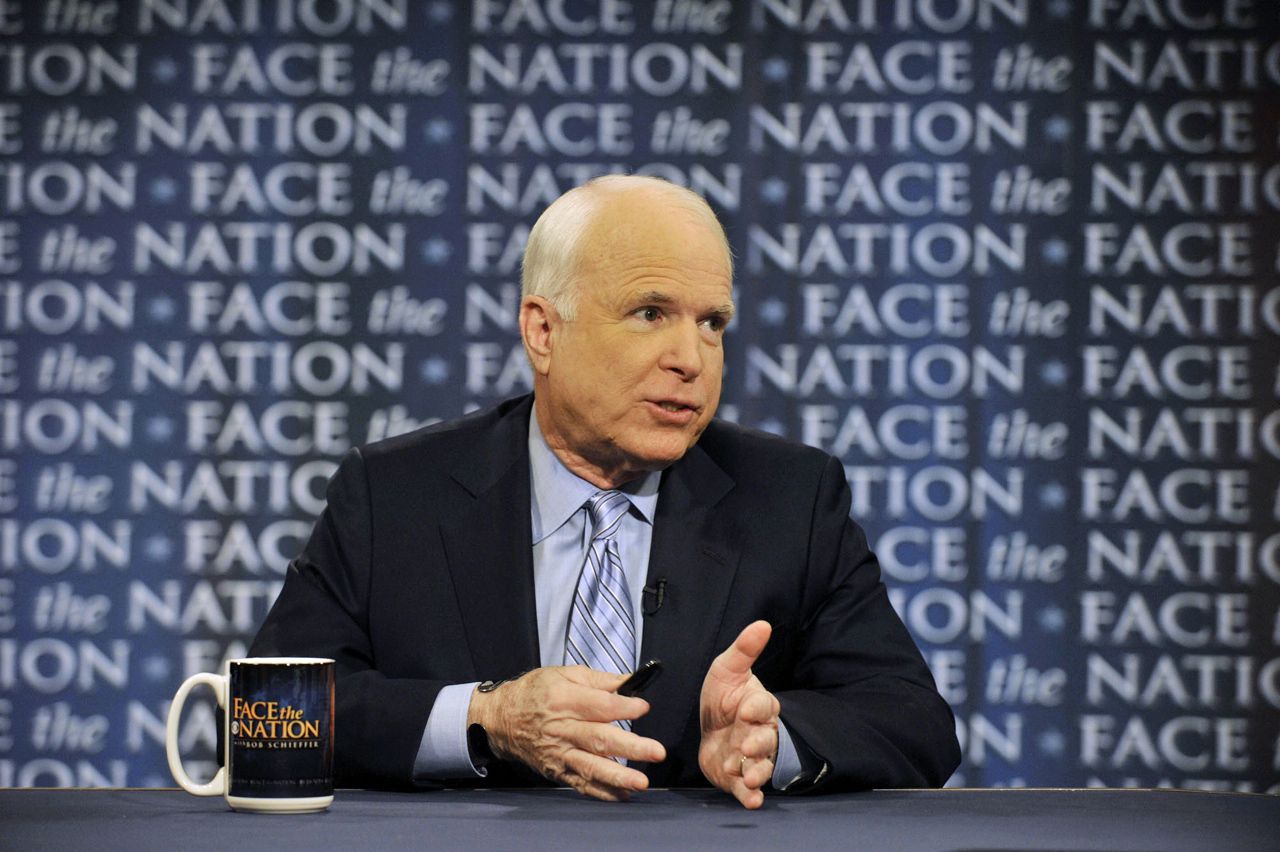