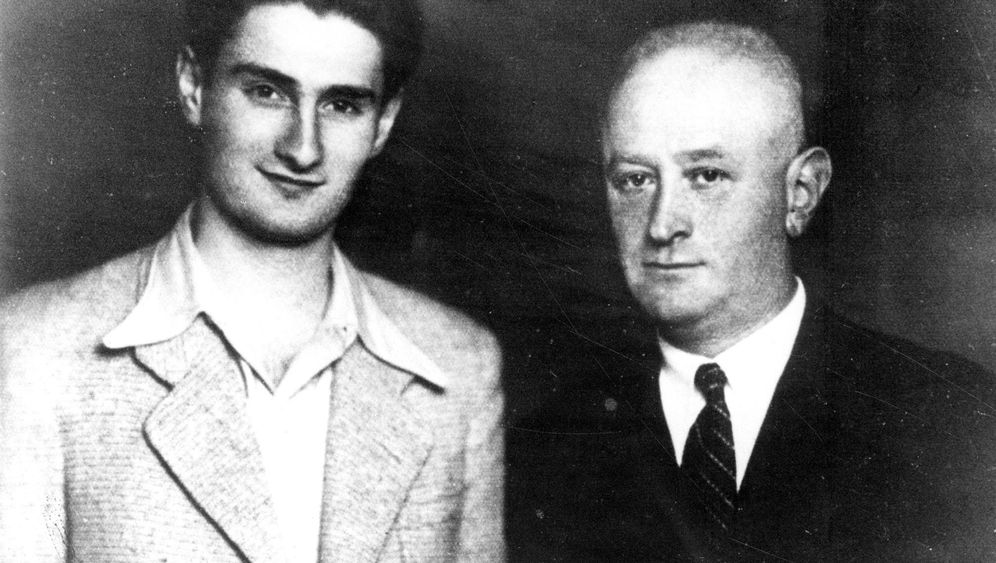 Photo Gallery: The Fate of the 'Struma'

David Stoliar's neat house sits atop a hill on the edge of Bend, a small city in central Oregon. A few steps lead up to the front door. Stoliar's wife, Marda, opens, followed by a happy beagle. "Come in," she says cheerfully. "Come in."

Her husband is waiting in the living room, surrounded by souvenirs and family photos. Stoliar, his light-blue eyes twinkling, appears much younger than 90. He laughs, chats about the weather, mentions the road conditions up on nearby Mount Hood. He's making small talk, obviously, to avoid the actual topic of this visit.

David Stoliar needs time to bring his thoughts -- and himself -- all the way back to that night. He's actually never discussed it before with a German reporter. "Nobody has asked me," he says with a shrug, adding emphatically that, after this meeting, he won't ever speak of it again -- with no one, no matter what or where they're from.

"Not a good memory," Stoliar states matter-of-factly. "I just want to finish my life in peace."

But memories, of course, can't be dismissed so easily. Especially these memories. The explosion, catapulting him into the water. The screams of the others, fading slowly. The wait for his own certain death on that icy night at sea.

Stoliar's story has always been a taboo of sorts. His ordeal illuminates a forgotten, inconvenient chapter of the Holocaust, which the then-Allies would rather not be reminded of. For, if anything, they chose to look the other way -- before, during and after.

"Everybody had an excuse," Marda says.

That chapter found its horrifying conclusion in the Black Sea, near Istanbul, in the wee hours of February 24, 1942. That's when a Soviet submarine sank a Jewish refugee ship en route to what was then the British Mandate of Palestine. All told, 786 people, among them 101 children, either died instantly or slowly froze and drowned in the wintry water.

Only one of them made it.

"There was no reason for me to survive," Stoliar says. "I feel like I survived by luck. Pure luck." To this day he struggles with guilt. Psychologists call this the Holocaust Syndrome.

So even today, after all these years, Stoliar approaches that memory warily, reluctantly and carefully coached by his wife. Born an American, almost 20 years younger than him and a gentile, Marda lacks David's trauma but knows his story almost better than he does.

"Talk about Romania," she goads him gently.

Setting Out for Freedom

David Stoliar grew up in Romania, home to nearly 800,000 Jews before World War II. By the summer of 1940, their life, too, had become unbearable, thanks to anti-Semitic laws, deportations and, ultimately, bloody pogroms.

Stoliar's mother fled to Paris to seek safety. The 19-year-old son stayed behind with his father, who eventually bought him a passport and a ticket to freedom -- or, rather, a ticket to Palestine on a ship named Struma. In today's value, that ticket cost $1,000 (€775).

The Struma followed an armada of previous ships that had been trying to make it to the Holy Land since the beginning of the war. Many of these passages, however, ended in death, and most were illegal. Great Britain, which administrated the British Mandate of Palestine back then, had been curbing Jewish immigration since 1939 and ultimately blocked it altogether in the hopes of keeping the Arabs from taking up arms in support of Nazi Germany.

The Struma was no more than a pile of junk. Built in 1867, this former luxury yacht had been sadly degraded to a cattle transport ship. The masts were long gone, leaving just a wooden hull, barely held together by metal plates. The engine, added later, worked only sporadically.

That didn't prevent two Jewish groups from Romania from chartering the Struma in 1941 for their escape from the Nazis. They advertised the journey into the unknown with promising pamphlets, some of which read "Bon voyage!" and "Welcome to Palestine!"

Stoliar signed up along with his fiancée, Ilse Lothringer, and her parents. But when they finally caught a first glimpse of the Struma in the Black Sea harbor of Constanta, it was a bad omen: The ship, originally meant for only 150 passengers, had been retrofitted to carry almost 800, in tiny wooden bunks on three low levels -- and that in the coldest winter in generations.

"Like sardines," Stoliar says. "We couldn't even turn over. But we had no way of going back."

After several delays they finally put out to sea on December 12, 1941. Their route was supposed to take them through the Black Sea, the Bosporus and the Mediterranean to the port of Haifa. But they had gone only a few kilometers when the engine started sputtering - and then died completely as they approached the Bosporus.

A Turkish tugboat schlepped them to the harbor of Istanbul, supposedly to have the engine fixed. The refugees, lacking visas, were forbidden to disembark. Instead, the authorities raised the black and yellow quarantine flag over the Struma.

Meanwhile, a long, diplomatic tussle began behind the scenes. Great Britain refused to allow the Struma to continue on to Palestine. Romania didn't want it back, either. The United States stayed out of it completely. And Turkey, still neutral at the time and not wanting to get on the wrong side of anybody, forced the passengers to stay on board, where they were slowly starving.

"We were not considered human", Stoliar says. "So why should you help?"

Conditions on board worsened rapidly. Food became scarce; a pregnant woman suffered a miscarriage. The only help came from Simon Brod, a local Jewish businessman who rescued many refugees over the course of the war. He occasionally brought food and water.

Turkey eventually took action on its own. On February 23, 1942, policemen stormed the Struma, cut the anchor chain, tugged the ship back into the Black Sea -- and set it helplessly adrift.

"We knew we had nowhere else to go," Stoliar recalls. "We all smelled the end of it."

Indeed, that end came in the early hours of the following day -- in the form of a sudden explosion.

Most of the passengers were asleep, including Stoliar. "It was probably three or four in the morning," he says, now softly and haltingly. "I woke up as I was thrown into the air. I fell back into the water, and when I surfaced, there was no vessel anymore. Nothing. Just debris."

What they didn't know at that point was that the Struma had been hit by a torpedo fired from a Soviet submarine a kilometer away. Decades later, it was revealed that Stalin had given out a secret order to sink all neutral ships in the Black Sea.

Most passengers and the Romanian crew of the Struma died in the torpedo's explosion. Among them were Stoliar's fiancée, Ilse, and her parents, who had been sleeping in the bottom part of the ship's hull. One reason Stoliar survived was that his bunk was right below deck.

Back in Bend, Stoliar gets up, rummages about and brings out an album. All he has left is a single black-and-white photo of Ilse, showing her on a balcony, laughing and holding a puppy. It's a copy; the original is in the archives of Yad Vashem, the Holocaust memorial in Jerusalem.

Marda nudges her husband back into the past. "So, that night, what happened next?"

Oh, yes, that night. Stoliar sighs and sits down again.

More than 100 survivors were still struggling to stay afloat and alive in the ice-cold water around him. Stoliar and a few others clung to a piece of floating wreckage, a section of the wooden deck. But one after another they froze to death and slipped into the abyss. "Eventually," he says, "I was just by myself."

At some point, a man swam over. He introduced himself in Russian as Lazar Dikof, the Struma 's chief mate. They sat on that piece of wood talking, yelling, trying to keep each other alive.

Stoliar lost hope. He tried to kill himself by cutting his wrists with a pocket knife. But even that didn't work: "My hands were too swollen from the frost."

After 24 hours, a coast guard rowboat appeared and picked Stoliar up. He was brought to the port of Sile and then to a military hospital in Istanbul. A week later, he was moved to a jail, where he was detained for being in Turkey "illegally."

Stolier was kept in jail for 71 days. Only then did the British government decide to grant an "exception" and allow him to enter Palestine. A train took him to Aleppo, a car to Tel Aviv, both arranged by Brod.

After the war, Stoliar tried to forget about the Struma and start a new life. His mother had died in Auschwitz. His father survived in Bucharest, and Stoliar brought him to Palestine.

But not even his first wife, Adria, whom he married in Cairo in 1945, knew about the Struma.

In 1954, Stoliar ended up working for a trade company in Tokyo. Adria died of cancer. An arranged date with Marda, a shoe designer from Oregon who was living in Paris then, turned into his second marriage. After a life traveling the world, they settled in Bend.

Stoliar didn't mention the Struma until two years into their marriage.

The story of the Struma faded into obscurity. MGM once wanted to make a movie about Stoliar's story, but he declined. There were a few articles in newspapers and magazines. In 2003, Douglas Frantz and Catherine Collins, two former New York Times correspondents, reconstructed the tragedy in their book Death on the Black Sea. Stoliar, albeit reluctantly, was their main source.

So now he wants to stop talking about it altogether. "Why did the others die," he still asks himself, "but I didn't?"

It's a question with no answer.

His mind returns to the present, and his light-blue eyes twinkle again. He laughs, talks about the weather, discusses the road conditions up on Mount Hood. The happy beagle jumps onto his lap.