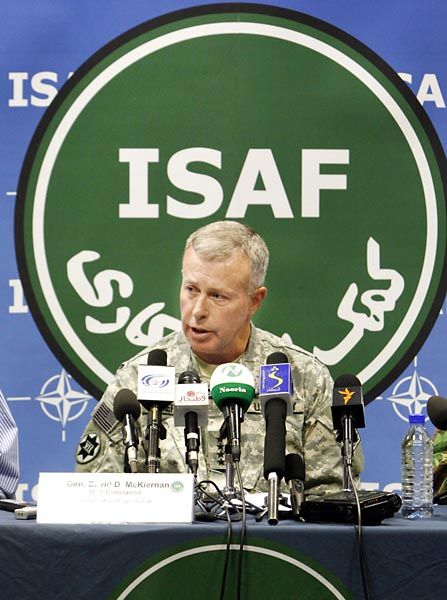 SPIEGEL: Many Germans are highly critical of the Bundeswehr's deployment in Afghanistan. Can you explain why we should put the lives of our soldiers at risk there?

McKiernan: I believe they should relate the right outcome in Afghanistan to their own security in Europe. The Taliban harbored al-Qaida and others and we made a commitment to keep them from returning. In order to do that, we must conduct operations against insurgents. NATO did sign up for operations, and I would like to send out a reminder that Germany is part of NATO. If you're telling me the German population doesn't support the NATO commitment then that's unfortunate, but there is a NATO commitment to this mission.

SPIEGEL: Germans are prepared to support the government of Hamid Karzai and to push forward with reconstruction, but they clearly aren't interested in waging war. More and more civilians are falling into the line of fire in the fronts between the insurgents and ISAF, and ISAF soldiers are dying everyday.

McKiernan: I am very concerned that we are seeing an increase in violence. Part of the reason for that increase is related to the tribal areas across the border in Pakistan that provide sanctuary and freedom of movement for militant groups that are operating in Afghanistan.

SPIEGEL: Though the fighting is happening in Afghanistan, a few neighboring countries are now participating in an invisible manner. They provide support to militant groups because they do not want American dominance in their backyard.

McKiernan: I understand that there are people who don't want any foreign military troops in their country. But there is no alternative to our presence here as long as the legitimate government of Afghanistan still needs the support of the international community. If militants can continue to find sanctuary in the tribal regions, this region will remain unstable.

SPIEGEL: The tribal areas are located in Pakistan. How can the problem be solved in Afghanistan if it is being caused in another country?

McKiernan: The militant tribal groups that operate with impunity in the tribal areas are a problem for Pakistan as well as Afghanistan. The causes of the insurgency are extremely complex. Historically, the average time for a counter-insurgency campaign to be conducted with a successful outcome has been 14 years.

SPIEGEL: So we still have seven more years to go?

McKiernan: No, I didn't say that. A counter-insurgency takes a long time, longer than we thought. We also need additional military capability -- regardless whether it comes from Europe, the US or Afghanistan.

SPIEGEL: For a year now, the Americans have been working closely together with ISAF peacekeeping troops down a list of high-ranking Taliban commanders, who are either being targeted for assassination in commando deployments or arrested. But isn't the supply of jihadists endless?

McKiernan: We have had some effect by targeting Taliban leadership inside Afghanistan. In some cases they were killed. In other cases we captured them. This has had some effect, but there is a manpower pool and while I will not say that it is inexhaustible, we also can't see the bottom of the pool yet.

SPIEGEL: In the so-called caveats, or limitations to its deployments, that the German government submitted to NATO before taking part in the Afghanistan mandate, Germany claims it is unconstitutional to conduct a targeted killing unless there has been a direct attack. Are the Germans a particularly difficult ally?

McKiernan: If there is something the German military cannot do that the American military can do, then the decision has been a legal and political decision back in Germany, and I accept that. But as a soldier, I don't understand it. I don't understand ever putting your men and women in harm's way without their having the full ability to protect themselves. That also means operating on actionable intelligence to defeat insurgents and protect your forces. That's how you keep your soldiers alive.

SPIEGEL: NATO is constantly asking for additional soldiers and equipment. The latest request is for AWACS aircraft that are largely operated using German flight crews. Their mission would be to monitor the airspace -- and also help armed planes. For many Germans, who don't want to get involved in the battle, that goes one step too far.

McKiernan: The AWACS planes are needed to help control the airspace over Afghanistan so that conflicts don't develop. That includes both military and civilian airspace, which is being used more intensively. The Afghans don't have the capacity yet to do this themselves. I would like to make it clear to your readers that when an armed plane takes off, it has already been given approval to bomb a specific target. The AWACS have nothing to do with setting bombing targets.

SPIEGEL: In October the Bundestag will again vote on extending the Bundeswehr's mandate in Afghanistan. What will happen if Germany rejects the extension?

McKiernan: The signal it would send is the opposite of what I think we ought to be sending: that there is solidarity on the part of the international community to remain committed to Afghanistan.

SPIEGEL: What would happen to Afghanistan if NATO were to pull out overnight?

McKiernan: It would be terrible. We run the risk of Afghanistan reverting to insurgents' control and that it could again become a sanctuary for all kinds of criminal activity -- including narcotics trafficking, terrorist camps and other things that would directly affect the security of your country as well.

SPIEGEL: When will Germany be able to send its troops home?

McKiernan: I don't know. The tipping point will be when government at all levels, economy and security in Afghanistan are strong enough that we can stand back and provide support and mentorship.

SPIEGEL: In the time since Germany became militarily involved in the Hindu Kush, the risk of a terrorist attack in Germany has risen significantly. Wasnt our participation supposed to help make the world a safer place?

McKiernan: Before I came here to this assignment, I was the Commander of the US Army in Europe, of all of our troops stationed everywhere from Norway to Italy. There was a concrete threat in Europe from an organization called the Islamic Jihadist Union that included some German nationals. They had traveled to Pakistan to train in camps and had returned to Germany to carry out terrorist activities. Those camps also used to exist in Afghanistan, too. We have to ensure that those camps don't return to Afghanistan under the protection of the Taliban. As I said, it's complicated, and it will take time.

SPIEGEL: The majority of Afghans currently reject the government of President Karzai because of the country's immense corruption. Are we supporting the right regime?

McKiernan: We might not like it, and we might say there are unacceptable levels of corruption and perhaps it is ineffective in many areas of Afghanistan. But this is Afghanistan's legitimate government. It's true that good governance, that serves and meets the peoples needs locally to nationally, is one of the biggest challenges here, and that must be improved.

SPIEGEL: Both American presidential candidates -- Barack Obama as well as John McCain -- want to massively increase the troop presence in Afghanistan. How many soldiers are necessary?

McKiernan: I'm not going to put a number on it. If you give it a number, it sounds like that's the answer, but the conflicts in Afghanistan can't be resolved by military means alone. Ultimately the answer must be found politically.