DER SPIEGEL: Mr. Stoltenberg, one of your predecessors, the first NATO Secretary General Lord Ismay, said that NATO was there to "keep the Soviet Union out, the Americans in and the Germans down." Have you already come up with your own clever saying to use on Wednesday in Washington to describe the current state of the alliance?

Stoltenberg: My main message is this: NATO is good for Europe and North America. That's why we have to stand together. And: NATO is the strongest alliance in history because we change when the world changes.

DER SPIEGEL: We're not quite as optimistic about the state of the alliance. U.S. President Donald Trump is raising doubts about his solidarity with the alliance, Russia is stationing new medium-range weapons and with China a new military power is emerging beyond the scope of the trans-Atlantic alliance. Is the world a more dangerous place today than it was when NATO was founded?

Stoltenberg: The world is less predictable today. During the Cold War, we had hundreds of thousands of soldiers ready for action in the East and the West and tens of thousands of nuclear warheads. This confrontation between NATO and the Warsaw Pact was very dangerous, but at the same time also very predictable. Today we have fewer soldiers, fewer nuclear weapons and the Warsaw Pact is history. But we are experiencing a new uncertainty.

Stoltenberg: ... or the annexation of Crimea by Russia. That's exactly what I'm talking about. We need to prepare ourselves for the unexpected. NATO helps us to prepare for surprises.

DER SPIEGEL: The only problem is that the behavior of some allies has also become unpredictable -- first and foremost that of Donald Trump. How often do you check Twitter each day for White House news?

Stoltenberg: I use Twitter, but I don't only follow Mr. Trump. I do not deny that there are disagreements between the NATO member states. Take trade and climate policy, the Nord Stream 2 pipeline project and the nuclear agreement with Iran. At the same time, we can see that North America and Europe are working more closely together in NATO than they were a few years ago. Despite all the differences, there are new multinational NATO battlegroups in the eastern part of the alliance, and the U.S. is strengthening its presence in Europe.

DER SPIEGEL: But deterrence isn't based exclusively on soldiers and military equipment -- it also has to do with the opponent believing the alliance will stick together at the decisive moment. And every new Trump tweet raises fresh doubts.

Stoltenberg: No. The U.S. government and President Trump have not been lacking in clarity: They are 100 percent behind NATO, and they show it with their deeds. Since Donald Trump became president, NATO military spending for Europe has risen by 40 percent. The last American tank left Europe in 2013, but now the U.S. is back with an armored brigade -- because the security situation has worsened following Russia's annexation of Crimea. At the same time, the U.S. insists that the burden be shared more equitably. Although the economic strength is roughly the same, the U.S. spends more than twice as much on defense as the Europeans.

DER SPIEGEL: Trump's criticism is mainly directed at Germany. Has the federal government officially informed you yet that Germany will not be keeping its promise to spend 1.5 percent of economic output on defense in 2024?

Stoltenberg: First of all, I welcome that Germany is increasing its defense budget: from around 35 to 42 billion euros between 2014 and the present. That's an important step. Moreover, in their national plan for NATO, the German government has pledged to increase military spending by more than 80 percent within a decade. Germany's economy is big, so every tenth of a percent more for defense is a big step.

DER SPIEGEL: So, let's be clear: As long as the German government doesn't inform you otherwise, you expect Berlin will stick to the pledged 1.5 percent?

Stoltenberg: Of course. I assume Germany will keep its promises, and I see that defense spending is to be further increased in the current draft budget. I understand that it is harder for a government to spend money on defense than on roads, schools and hospitals. But we are not increasing our defense spending to please President Trump -- it's out of our own European interest. We see a stronger Russia, we see terrorists at our borders and we have to fear there will be cyberattacks.

DER SPIEGEL: Long-time NATO observers say the alliance has two problems: an American one and a German one.

Stoltenberg: No, that's not how I see it at all. I see that Europe and the United States are cooperating more on security issues. Germany leads NATO troops in Lithuania, participates in monitoring the airspace in the Baltic states, is deployed in Afghanistan and trains soldiers in Iraq. NATO's strength is that it works well together despite all its differences.

DER SPIEGEL: One answer to the lack of preparedness to spend a lot of money on the military is that Europeans are working together more closely on defense. French President Emmanuel Macron is calling for a European army and says that Europeans need to be able to defend themselves even without the U.S.

Stoltenberg: I support the Europeans when it comes to their joint defense. I welcome, for example, the close cooperation between Germany and the Netherlands with the joint brigade, which is happening under the auspices of NATO. But we must avoid a situation in which European efforts merely copy NATO's efforts or are even seen as an alternative to NATO. European unity cannot replace trans-Atlantic unity, especially after Brexit, at which point 80 percent of NATO's defense spending will come from countries that are not members of the EU.

DER SPIEGEL: Because Trump continues to sow doubts about his solidarity to the alliance, the idea has been circulating to extend the umbrella of the French nuclear arsenal to Germany and Europe. How do you feel about that idea?

Stoltenberg: The French have a clear view that these weapons are French weapons. Anything else would be speculation.

DER SPIEGEL: Do you understand why Germany's center-left Social Democratic Party has a tough time spending more money on the military? As a politician in the youth organization of Norway's Social Democrats, you were also involved in anti-NATO politics ...

Stoltenberg: ... on the contrary! As a young Social Democrat, I defended the alliance like no other. When I became head of the Norwegian youth wing of the Social Democrats in the 1980s, they were opposed to NATO. When I left, they were for it. My role models were Willy Brandt and his Ostpolitik ...

Stoltenberg: Exactly. Like Brandt, I did everything I could later as Norwegian prime minister not to isolate Russia. As prime minister, I reached agreements with Russia to extract oil and gas in the Barents Sea. This was not directed against NATO, rather, it succeeded because of NATO. The alliance provided a platform for the dialogue with the Russians.

DER SPIEGEL: But it looks less and less like that today. NATO has sharply criticized Russia repeatedly for violating the INF treaty banning medium-range nuclear weapons in Europe. But the Russians don't care. How great is the danger?

Stoltenberg: The INF treaty between Russia and the USA is of existential concern to the security of Europe, because medium-range missiles are built to strike Europe, not the U.S. We've been trying for six years now to get the Russians to comply with the treaty again. Unfortunately, the result is clear: There are no new American missiles in Europe, but there are new Russian missiles. These weapons are dangerous. They are mobile, difficult to discover and they can reach European cities without significant warning time. This lowers the threshold for the possible use of nuclear weapons in a conflict. We continue to call on Russia to come back into compliance, but we are also preparing for a world without an INF treaty. In that case, NATO's response to the new Russian missiles will be measured and defensive. Let me be clear: We have no intention of stationing new land-based nuclear missiles in Europe.

DER SPIEGEL: NATO members like Lithuania have warned that Russia could interfere in the European election campaign. How great do you consider this danger to be?

Stoltenberg: Free and fair elections are the basis of every democracy. It is therefore extremely important that we protect democratic institutions. Any attempt to influence the European elections through hacker attacks, propaganda or other forms of interference is unacceptable. We have to be vigilant.

Stoltenberg: NATO has invested a lot in defense against cyberattacks. For example, we exchange real-time information on cyberattacks with NATO members and the EU. But the best weapon against disinformation is our free society. We respond to propaganda with facts, not propaganda. One of the best instruments for protecting our democratic institutions is a free and independent press. Your work prevents governments from undermining confidence in our democratic institutions.

DER SPIEGEL: The Soviet Union, even at the peak of its power, was never an adversary playing at eye level with the U.S. economically. That's different with China today. How is China changing NATO and its tasks?

Stoltenberg: We have to assess the consequences of China's rising power. There is no doubt about that. China is a growing economic power, but also a military one. With the exception of the U.S., no country in the world spends more on arms than China. The Chinese are developing capabilities that they can use worldwide -- new weapons systems, new missiles, and they are not bound by the INF treaty. It's not a question of NATO expanding in the direction of the South China Sea, to the contrary: The Chinese are getting closer to us. They perform naval maneuvers in the Mediterranean Sea, the Baltic Sea and the far north.

DER SPIEGEL: China could leave the West trailing behind on future-oriented issues like artificial intelligence. Chinese companies want to get involved in the construction of new 5G mobile networks. Is the U.S. right to see this as a threat to its security?

Stoltenberg: It is up to the member states to decide on which firms they award investment contracts and with which countries they conduct trade. We respect national decisions, but also point out that these decisions could have consequences for our security. That's why we have agreed on standards in NATO to ensure a secure telecommunications and energy infrastructure, and we are also discussing this with the EU.

DER SPIEGEL: Can NATO operate with mobile networks that are being set up by the Chinese company Huawei, which has close ties to the state?

Stoltenberg: Some NATO member states, including the U.S., are very concerned about Huawei setting up the networks of NATO members, and have expressed their views accordingly within NATO. We take these concerns very seriously.

DER SPIEGEL: Mr. Stoltenberg, we thank you for this interview. 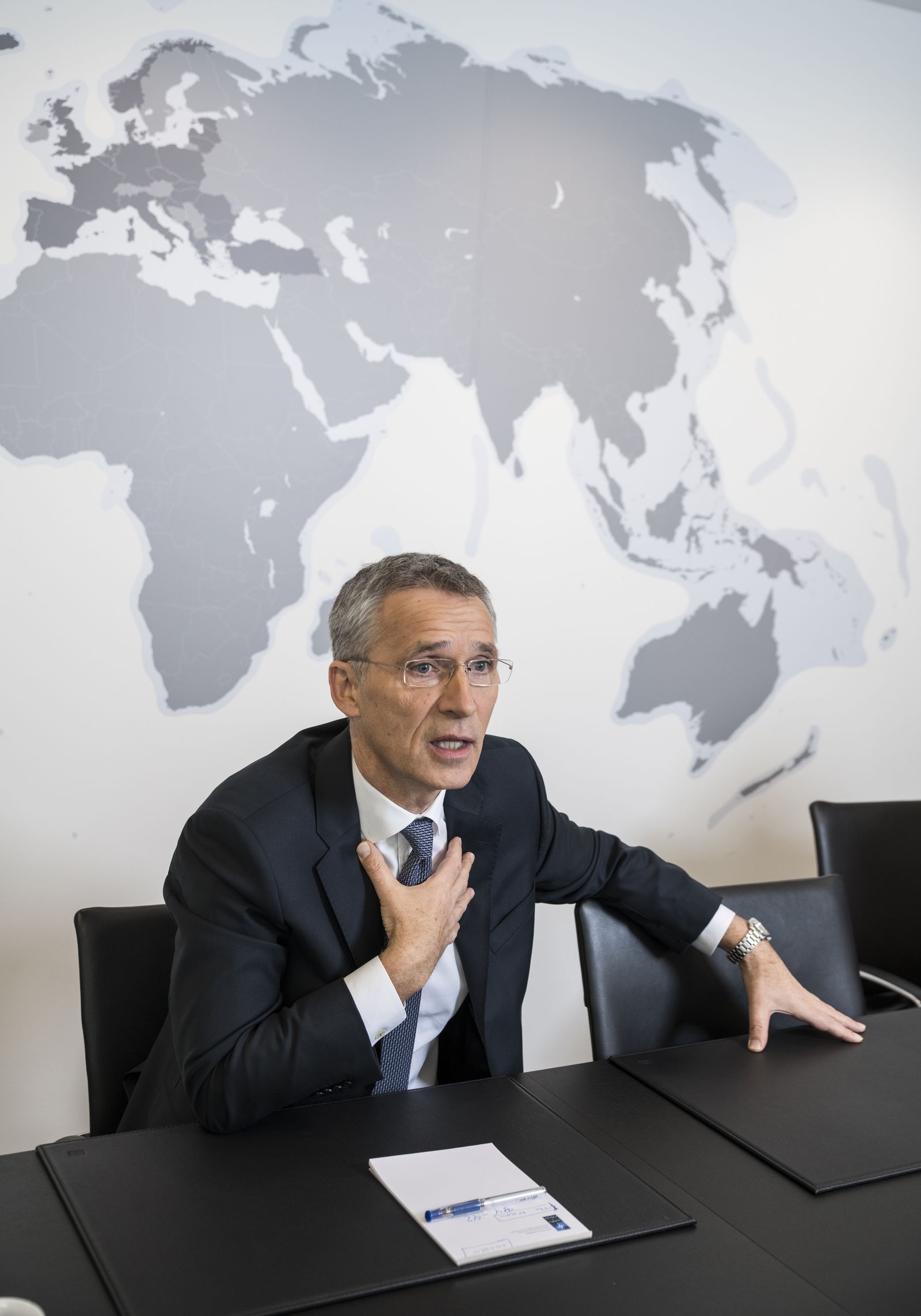 NATO Secretary General Jens Stoltenberg during his interview in Brussels