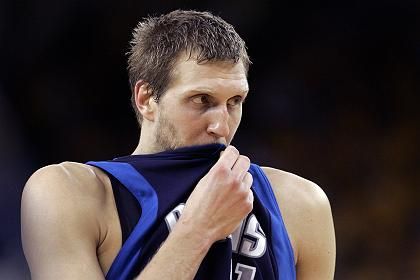 SPIEGEL: Mr. Nowitzki, next to (German soccer star) Michael Ballack you are Germany's highest-paid professional athlete. This season you'll be earning a salary of at least $16 million with the Dallas Mavericks. And this spring you were voted the Most Valuable Player in the NBA. One could say that you are currently Germany's biggest sports star. All that, and you still haven't even won a championship. Why not?

Nowitzki: I won the Lower Franconia tennis championship when I was 12. Does that count?

Nowitzki: I'm now 29 years old. Two years ago, I was a member of the German team in the European championship final and last year I played for the Mavericks in the NBA finals. We failed both times. Things just don't always go the way you want them to. But I'm certainly aware that many stars eventually quit and that it leaves a certain taste in their mouths. That's when people say that so-and-so never quite made it. I'd like to avoid that experience. I want to finally get that championship here in the NBA within the next three years.

SPIEGEL: How painful was it to have been eliminated in the first round of the NBA playoffs with the Mavericks this year and then in the quarter finals of the European championship with the German national team?

Nowitzki: I was out of my mind, and incredibly frustrated. That's when you question everything -- your entire career. Especially the early elimination in the NBA after such a great season, that was terrible. Only now, after a few months, is it possible to see the bright side. For example, that I was named the NBA's Most Valuable Player.

SPIEGEL: You once said that in sports there is no such thing as a disgrace.

Nowitzki: And I stand by what I said. If you do the best you can, you have nothing to be ashamed of. A defeat is not a disgrace.

SPIEGEL: In the third game in last year's finals, against Miami, you missed a freethrow three seconds before the end of the game. It was the first time you were heavily criticized in the US.

Nowitzki: You don't lose a game because of a missed freethrow, just as you don't win a game because of a made freethrow. The whole game was messed up. Especially at the end of a game, when everything comes together, there are lots of situations in which there was something you should have done differently. I have trouble sleeping after every game, especially after important ones. That's when there's a lot going through your head. A failed freethrow, the entire game, the many missed opportunities. Reflecting about the game is part of sports, but getting over those kinds of games is also part of it.

SPIEGEL: Do you fail in key situations because you think too much?

Nowitzki: I take my sport damned seriously. Basketball is my life. There are other people who go into important games as if they were any other game. I'm a brooder and I spend a lot of time thinking about my opponent, about the things he can do and about what I have to do to win. I don't think I'll ever be able to change that.

SPIEGEL: Does that come from fear of failure?

Nowitzki: Hmm, I really can't let myself think that way. Actually, it's more like the opposite. I often dream about slamming the ball into the net in a situation where everything is on the line.

SPIEGEL: Do you work with mental trainers in the US?

Nowitzki: We had a very good psychologist with the Mavericks for four years. Unfortunately, he switched to baseball last year. He was very effective in helping me get over defeats. Unfortunately, I had already been in the US for five years when he joined the team, and I had developed my routines long before that. He got there a little too late for me. 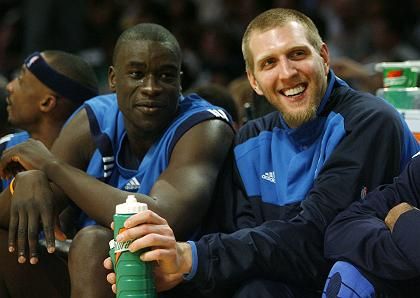 SPIEGEL: What's it like working with a mental trainer?

Nowitzki: First of all, he has to get to know the athlete really well. The way he thinks and feels. In the end, he taught me exercises that helped me think positively and made it easier for me to bring myself down after a game. I still do that today. I try reading or playing the guitar. I'm also learning how to play the piano now. I've already started lessons and I've even bought a piano. It also has something to do with the fact that I'm a little afraid of dumbing myself down and stagnating intellectually. I have to make sure that I don't just hang out with the guys and play PlayStation.

SPIEGEL: After the Mavericks dropped out of the playoffs, you and Holger Geschwindner, your personal trainer and the man who discovered you, spent five weeks traveling in Australia. Was that a kind of therapy?

Nowitzki: The idea was to get some distance. The media in Dallas really ripped us apart and wanted to see the team replace all its players, and they were claiming that we were all lousy. I just wanted to go someplace far away. Basketball players aren't that important in Australia. We did a lot. We went hiking, played the guitar around the campfire at night and talked. One of the things we talked about was what could happen after the end of my career.

Nowitzki: I want to start setting things up now. Basketball gave me a lot, which is why I want to stay connected with this sport later on, maybe working with young people. But it would be more in the background. Being in the spotlight was never really my thing. I never wanted to be famous. Of course, you also think about different things at 29 than when you were 20. In the long run, for example, planning a family is a very important goal for me. I haven't found the right woman yet. That's something I want to pursue in the next few years.

'Money Was Never a Goal in My Life'

SPIEGEL: It's that easy?

Nowitzki: Of course. I always told myself that I didn't want to marry before I turned 30, and that's how it's worked out. But I also don't want to wait until I'm 40 to get married. I'm sure that something will happen in the next four or five years. 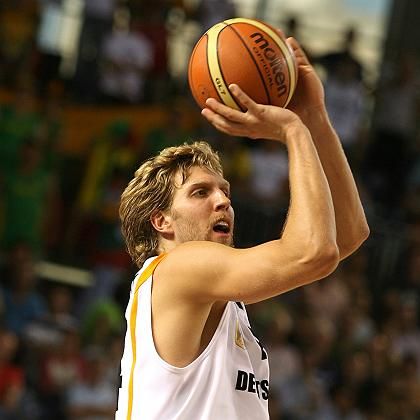 Nowitzki says he is still working on the perfect shot.

SPIEGEL: Did you ever think about leaving Dallas and getting a fresh start somewhere else?

Nowitzki: No. Why should I? Of course, it was a huge day for me when I was named the NBA most valuable player in May. I was supposed to say a few words in front of a giant auditorium, which is something I don't do very well. I even had a joke ready, but then Mark Cuban, the owner of the Dallas Mavericks, starting talking, and when he talked about me he started to cry. Obviously it took me a while before I could say much.

SPIEGEL: Why was he crying?

Nowitzki: We have a very good relationship. After buying a share of the Mavericks in 2000, he put a lot of faith in me, and I always felt that I owed him something. He's a media entrepreneur. He bought the team a plane and got a new arena, and for all that I would love to give him the championship. We almost made it a couple of times.

SPIEGEL: There are rumors that superstar Kobe Bryant is moving from the Los Angeles Lakers to Dallas, possibly as part of a trade. In that case, you'd have to play in Los Angeles.

Nowitzki: Oh, those are the usual rumors that keep our business interesting. The same thing happens in the German soccer league. I couldn't care less about what Kobe is doing in L.A. Our team is strong enough as it is.

SPIEGEL: A trade would be out of the question?

Nowitzki: Definitely. Before the season, I signed up early for another three-year contract -- even though I still had two more years to go.

SPIEGEL: And what if Cuban wants to trade you anyway?

Nowitzki: I couldn't do anything about it, of course. But I couldn't imagine that, given our relationship. I'm pretty sure that he still believes in me, despite the screw up in the playoffs.

SPIEGEL: A switch could be financially lucrative.

Nowitzki: I'm already paid very, very well, and I didn't go to America to make more money. I wanted to play in the best league in the world. Sure, it's nice to know that I never have to think about money again in my life or worry about my family in that regard. But knowing that is good enough for me. Money was never a goal in my life. My upbringing was too down-to-earth for that. I come from a family of painters in Würzburg, and my mother makes sure that I don't let things go to my head.

SPIEGEL: What do you do with your millions?

Nowitzki: Investments. I bought a house here five years ago, but that's all. Six cars and all kinds of jewelry, the way the other guys do it here, that's not something I need.

SPIEGEL: You went to the United States when you were 20. How foreign do you feel in the world of the NBA?

Nowitzki: You wouldn't believe how different I felt here at first. It was a completely new world. I tend to be shy, and it took me two years before I felt completely at home and had the slang down.

SPIEGEL: And now, when you go back to Germany, do you feel a little like a stranger there?

Nowitzki: Würzburg will never change for me. My parents are there, and I still have my buddies there. I feel very comfortable in both places, but after almost 10 years in the NBA and living the American lifestyle, I have outgrown Würzburg a little. America is my home now.

SPIEGEL: How different is the atmosphere in the German national team?

Nowitzki: Of course, lots of those players are completely unlike American players. They move in different circles, and many are graduates of college prep high schools.

SPIEGEL: Could it be that there are too many brains for the team to be truly successful?

Nowitzki: Especially at the European championship, it was obvious, once again, that 19 or 20-year-old talents had grown into the sport on other countries' teams. We haven't had any of that in recent years. I'm not sure if it's because of the trainers or that young people just aren't working hard enough.

SPIEGEL: The German national team has turned into a sort of one-man-show these days.

Nowitzki: That's not true. You need consistency to play at the top of the league. Even the world's best teams sometimes have quarters where nothing works, and yet that doesn't suddenly put them 30 points behind. In our case, we suddenly bottomed out in a couple of games, and there just wasn't anything left.

SPIEGEL: Your manager, Holger Geschwindner, handled your business affairs for many years. In 2005, he spent five weeks in jail on charges of tax evasion, to the tune of €3 million. You paid his bail of €15 million. Geschwindner was later sentenced to one year of probation and fined €50,000. How could that happen?

Nowitzki: You'd have to ask him. All I know is that we went through hell together at the time. It was the most difficult time of my life. I never really paid attention to these things. Perhaps that was my mistake. But I had trusted him completely. He was always a second father to me. He's in Dallas right now and we're getting ready for the season.

SPIEGEL: And how do you feel about it?

SPIEGEL: Mr. Nowitzki, thank you for taking the time to speak with us.