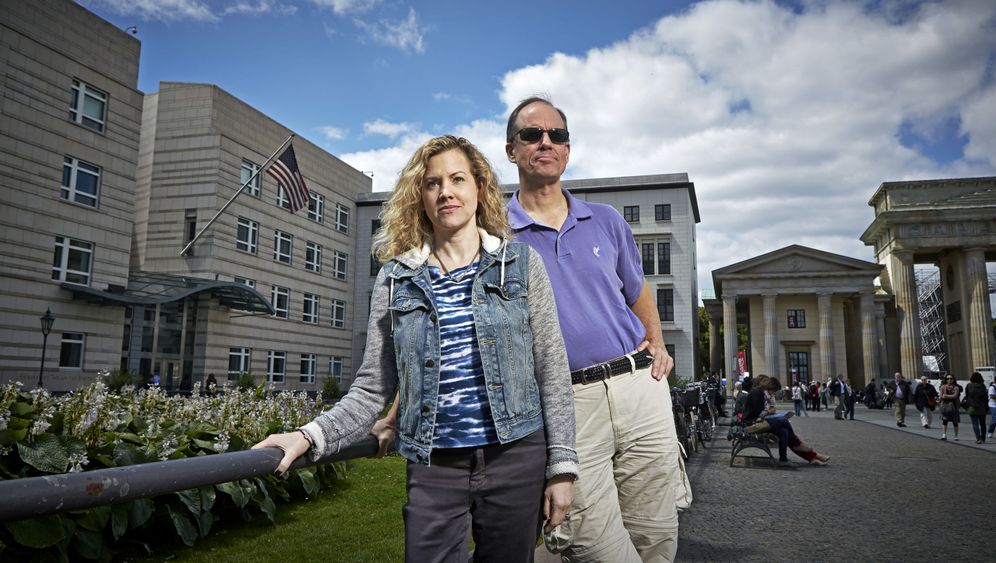 For more than a year now, the world has closely followed revelations disclosed by former American intelligence worker Edward Snowden. The documents from the whistleblower's archive have fueled an at times fierce debate over the sense and legality of the National Security Agency's (NSA) sheer greed for data.

In its current issue, SPIEGEL conducted two interviews it hopes will contribute to the debate. The first is with two major critics of the NSA's work -- human rights activist and lawyer Jesselyn Radack, who represents Snowden, and former spy Thomas Drake. The second interview is with John Podesta, a special advisor to United States President Barack Obama.

SPIEGEL: Germany's federal prosecutor has opened a formal inquiry into the surveillance of Angela Merkel's mobile phone, but he did not open an investigation into the mass surveillance of German citizens, saying that there was no evidence to do so. Mr. Drake, as a former NSA employee, what's your take on this?

Drake: It stretches the bounds of incredulity. Germany has become, after 9/11, the most important surveillance platform for the NSA abroad. The only German citizen granted protection by a statement by Barack Obama is Angela Merkel. All other Germans are obviously treated as suspects by the NSA.

SPIEGEL: Ms. Radack, do you have an explanation for the German federal prosecutor's position?

Radack: Of course. They don't want to find out the truth. Either they're complicit to some extent or they don't really care to investigate.

SPIEGEL: The federal prosecutor says that he has no chance of obtaining any evidence because everything is classified and that he doesn't expect the Americans to cooperate anyway.

Radack: As a government, you have the power to make people testify, to interview people, to call them in front of a grand jury or the equivalent. I think you should at least try to subpoena them, and if they ignore the subpoena, they don't get to have their little family vacation in Europe, because they would be on a wanted list.

SPIEGEL: Our newsmagazine recently released documents from the Snowden archive pertaining to the work of the NSA in Germany. They include a list that shows 150 different places, at least historically, where the NSA and its predecessors conducted espionage here in Germany, so-called Sigads.

Drake: Yes, those are activity designators for signals intelligence, so these are sites where data is collected, data is accessed, and it's being provided back to the NSA.

SPIEGEL: Are we talking about data that was gathered for the sake of the security of the United States and Germany?

Drake: Well, that has traditionally been the purpose, but it goes far beyond that. Just look at the technology, the network. All the important information, economic as well, crosses through Germany in some manner. It is either collected by the NSA itself or forwarded to it by the BND or companies that secretly pass it along.

SPIEGEL: The NSA argues that, in the war against terrorism, in order to find the needle in the haystack, we need lots of hay.

Radack: If you're looking for a needle in a haystack, you don't make the haystack bigger. The US government is fear mongering when it claims: "If you're against surveillance, the next terrorist attack is on you!"

SPIEGEL: What is the true reason for the data collection?

Radack: It's about population control. And economic espionage.

Drake: One of the big elephants in the room is Germany with its engineers. It's extraordinarily tempting to know what's going on here -- new products, new methodologies, new approaches.

SPIEGEL: Mr. Drake, was that your assignment when you worked for the NSA in Germany?

Drake: I personally didn't, but I knew that it happened.

SPIEGEL: On the other hand, Snowden's documents show that Germany's foreign intelligence service, the BND, cooperates closely with the NSA. Why does it do that if it harms Germany?

Drake: It's a sort of paradox in that relationship. The cooperation between the two services goes back to the Cold War. There was a deep intelligence sharing going on. The NSA has always been the master in that relationship, and most of the sharing is in one direction. It has never been equal. Then 9/11 happened.

SPIEGEL: The terrorist attacks in New York and Washington.

Drake: Yes, and guess which country was actually declared as a target nation No. 1 afterwards? It was Germany. It was like Germany needs to be punished, because the hijackers lived here, trained here and communicated from here.

SPIEGEL: To punish? Was that the political agenda?

Drake: You would not have heard it particularly that way. But the conversation was always like: My gosh, we can't trust the Germans because guess who was living amongst them: some of the hijackers. Ironically, this actually bound the partnership with the BND even tighter, because the NSA wanted to have more control over what your guys were doing.

SPIEGEL: How close is the relationship between the two intelligence agencies?

Drake: Extraordinary close. They were not like the United Kingdom or Australia and other members of the "Five Eyes," the closest allies of the NSA. But it is fair to say, that the NSA relationship to the BND is similar to this.

SPIEGEL: You yourself worked as a spy for the NSA. What made you become a whistleblower?

Drake: It was only months after 9/11. Back then it became clear to me that in order to avoid another failure to protect people we just set aside the rules of law. The NSA violated our constitution by spying on its own people. Today, we have the greatest surveillance platform the world has ever seen. This is why I shudder. National security has become a state religion. They say they want to keep us safe, but from whom?

Radack: Oh, I've heard that a lot of times: This is all being done for security. The former NSA director Keith Alexander lied to Congress when he said they had thwarted 54 terrorist plots. Four months later, he was dragged back to the Senate Judiciary Committee and had to admit it had thwarted one plot. Maybe.

SPIEGEL: Information from US intelligence services allegedly helped lead to the arrest of members of the Sauerland terrorist group that was planning attacks in Germany.

Radack: I'm not denying this is possible, but the vast majority of this, 99.9 percent, is not about security. It's about controlling people and information.

Drake: Yes, this is where we get to the dark side of that whole surveillance apparatus. It takes the Stasi motto of knowing everything on a new level. In order to know it all, the NSA collects it all.

SPIEGEL: Can you still recall your first reaction to the Snowden affair?

Drake: None of it surprised me.

Radack: I thought: Finally, finally! Because for years I have been representing NSA whistleblowers who were saying the agency is monitoring all your e-mails, all your phone calls. They turn over every kind of personal data without any kind of warrant. And nothing happened. My second reaction was: Whoever did this is going to be completely nailed.

SPIEGEL: Mr. Drake testified in front of an investigative committee on NSA spying in Germany's federal parliament this week. Edward Snowden will not be able to because he hasn't been invited to Germany by the committee. However, Snowden doesn't want to testify while under asylum in Moscow. Can you explain why?

Radack: Members of the committee wanted an informal meeting in Moscow. But comprehensive testimony is only possible in Germany.

SPIEGEL: Some people believe Snowden will only be willing to cooperate if he is offered residency in Germany.

Radack: No. He has spoken in front of the Council of Europe, so he has done this before. Germany really needs to decide how serious it is about clarification.

SPIEGEL: Some members of the parliamentary investigative committee claim that your client doesn't really have much information to provide about NSA activities on German soil, anyway.

Radack: That is incorrect given that they haven't heard his evidence. It seems like the majority of the parliamentarians -- from both the conservative Christian Democrats and the center-left Social Democrat -- don't want to be affiliated too closely with him. I think a lot of them are acting cowardly.

SPIEGEL: Would Germany even be a safe place for Snowden?

Radack: Germany does have an unfortunate history in terms of providing protection to informants from the NSA.

SPIEGEL: You are alluding to the case of Jens Karney, who was kidnapped in the middle Berlin in 1991 by US special forces.

Radack: Yes, but I nevertheless still think Germany seems like a good place for Edward Snowden to get asylum.

SPIEGEL: Mr. Drake, are you still in contact with former colleagues? How do they view Snowden's actions?

Drake: Right now I have no contact with anybody. They said internally that if you have any contact with Drake, you're risking your job. That's a chilling message. I suspect there is actually great sympathy for Snowden, but it is never shared. Because people go home at night, watch their TV shows, pay their mortgages and they don't want to have that disturbed. It's too uncomfortable to look in the mirror.

Radack: Sometimes people show up anonymously at our events and then whisper in my ear: "I work at NSA. I support everything you do."

About Jesselyn Radack and Thomas Drake

Jesselyn Radack, 43, has provided legal defense to several prominent whistleblowers. She previously worked as an advisor for the United States Justice Department. Today the attorney counts former NSA worker Edward Snowden among her clients.Thomas Drake, 57, is also one of Radack's clients. After the Sept. 11, 2001, terrorist attacks, Drake exposed abuses at the NSA. In 2011, he was convicted by a US court and given probation on a misdemeanor charge relating to the case. All serious charges against him had been dropped. On Thursday, he testified before a committee in the German parliament investigating NSA spying in the country. 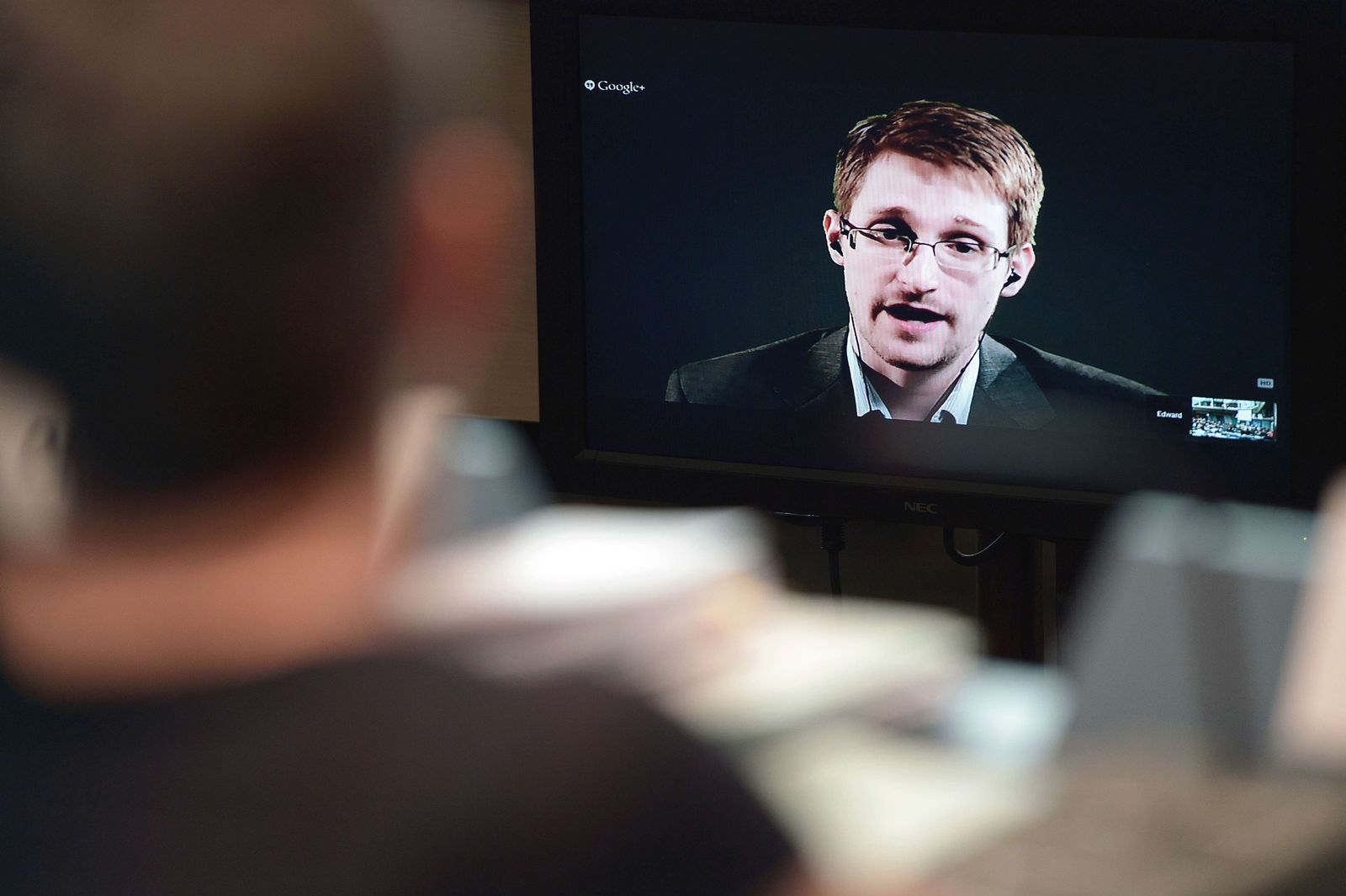 Here, Snowden can be seen speaking by video to the Council of Europe in Strasbourg, France, on June 24. Radack suggests it would be possible for Snowden to testify in Germany.