Getting in touch with Osman Kavala isn’t easy. The Turkish entrepreneur and philanthropist has been held in Silivri prison, near Istanbul, for the past four years. Apart from his lawyers and wife, he is allowed almost no visitors.

Kavala, 64, is one of the most important supporters of Turkish civil society. Through his Anadolu Kültür Foundation, he has facilitated a whole range of cultural projects in Turkey.

But President Recep Tayyip Erdoğan views him as an enemy of the state. He accuses Kavala of orchestrating the anti-government protests in Istanbul's Gezi Park in 2013 and of involvement in the failed coup attempt on July 15, 2016.

The Kavala case has long been a matter of concern for international courts and governments. At the end of October, Erdoğan nearly declared 10 Western diplomats, including the ambassadors of Germany and the United States, as personae non grata because they had spoken out in favor of Kavala's release.

The dispute has now been settled and, contrary to Erdoğan's threat, the diplomats will be allowed to stay in the country after all. However, this does not mean that the Kavala case is over. The Council of Europe is set to take the Kavala case up again in November.

DER SPIEGEL sent questions to Kavala through his lawyers. It is one of the few interviews that the Anadolu Kültür Foundation chair has given since his arrest – and the first since the scandal between Erdoğan and the diplomats.

DER SPIEGEL: Why do you think President Erdoğan has so much interest in your case?

Kavala: I don’t think that the President is interested in the details of the case or the accusations against me. But he is interested in the length of time I will remain in jail. I think it is his desire to nurture the claim that the 2013 Gezi protests were a foreign plot to overthrow the government. In the absence of any tangible evidence on the matter, the fact that I opposed construction in the park, the reason for the protests, and therefor empathized with the protestors, as well as my relationship with the Open Society Foundation, which was established in our country with the support of George Soros, have become the sole basis of this conspiracy theory. The belief that Soros supported public riots in various countries became the official view in government circles after the failed coup attempt on July 15, 2016. Bogazici (University) students who protested against the (government-)appointed rector are likened to Gezi protestors, are being marked as troublemakers and are accused of serving the interests of opposition parties, foreign powers.

DER SPIEGEL: Recently, 10 Western ambassadors issued a joint statement calling for your release. Was that helpful?

"The continuation of dialogue and cooperation in a way that will consistently address issues of human rights and the rule of law will be the appropriate approach before resorting to sanctions."

Kavala: Previously, the Council of Europe's Committee of Ministers made a series of decisions for the implementation of European Court of Human Rights (ECHR) rulings, inviting Turkish officials to take steps. There were similar statements made by European capitals and the European Parliament. After Joe Biden’s election, the U.S. Embassy also made a similar statement regarding my release. It would have been rational for the statement to be also taken as a warning that it may initiate infringement procedures against Turkey. But it unfortunately did not create such a reaction in public opinion. Despite it all, I believe that a common initiative by the representatives of European countries, together with the U.S., New Zealand and representatives of Canada, was beneficial in terms of creating a foreign relations atmosphere sensitive to human rights. This is not solely about Turkey.

DER SPIEGEL: Erdoğan has temporarily declared the 10 ambassadors who had requested your release to be "personae non grata.”

Kavala: It looks like a highly emotional reaction or a gesture intended for domestic politics. Fortunately, it was not put into action. The claim that a call made to the government to meet its obligations is interference in our internal affairs, especially the judiciary, is not very convincing. If interference in the judiciary is the issue, it happened two years ago with the European Court of Human Rights rulings that complied with the European Human Rights Convention and our Constitution. In this ruling, it was determined that my arrest, in the absence of evidence that would raise suspicion that any crime committed under Turkish law was a rights violation, and my immediate release was ordered. Moreover, the ECHR determined that the European Human Rights Convention’s Article 18 was violated. In other words, it was determined that my arrest was politically motivated. The ECHR’s ruling does not only concern the judiciary, it also serves as a warning to the government not to interfere in the judiciary. Unfortunately, requirements of this ruling were not fulfilled.

DER SPIEGEL: Should the EU impose sanctions against Erdoğan’s government?

Kavala: I can say that the continuation of dialogue and cooperation in a way that will consistently address issues of human rights and the rule of law will be the appropriate approach before resorting to sanctions.

DER SPIEGEL: Do you think you will ever be released from prison while Erdoğan is in power?

Kavala: I guess that there will be a tense political environment until the next elections. It seems that a rhetoric, echoing conspiracy theories about foreign powers actively (seeking) to topple the government, will be used during this period. That’s why, my imprisonment until elections may be just a wish. On the other hand, the Council of Europe's Committee of Ministers, which oversees the implementation of ECHR decisions, declared that it will decide to start infringement procedures unless I am released by the end of November. If this procedure begins and the cost of not complying with ECHR decision weighs heavier than the benefits of keeping me in prison, I could be released before the elections. 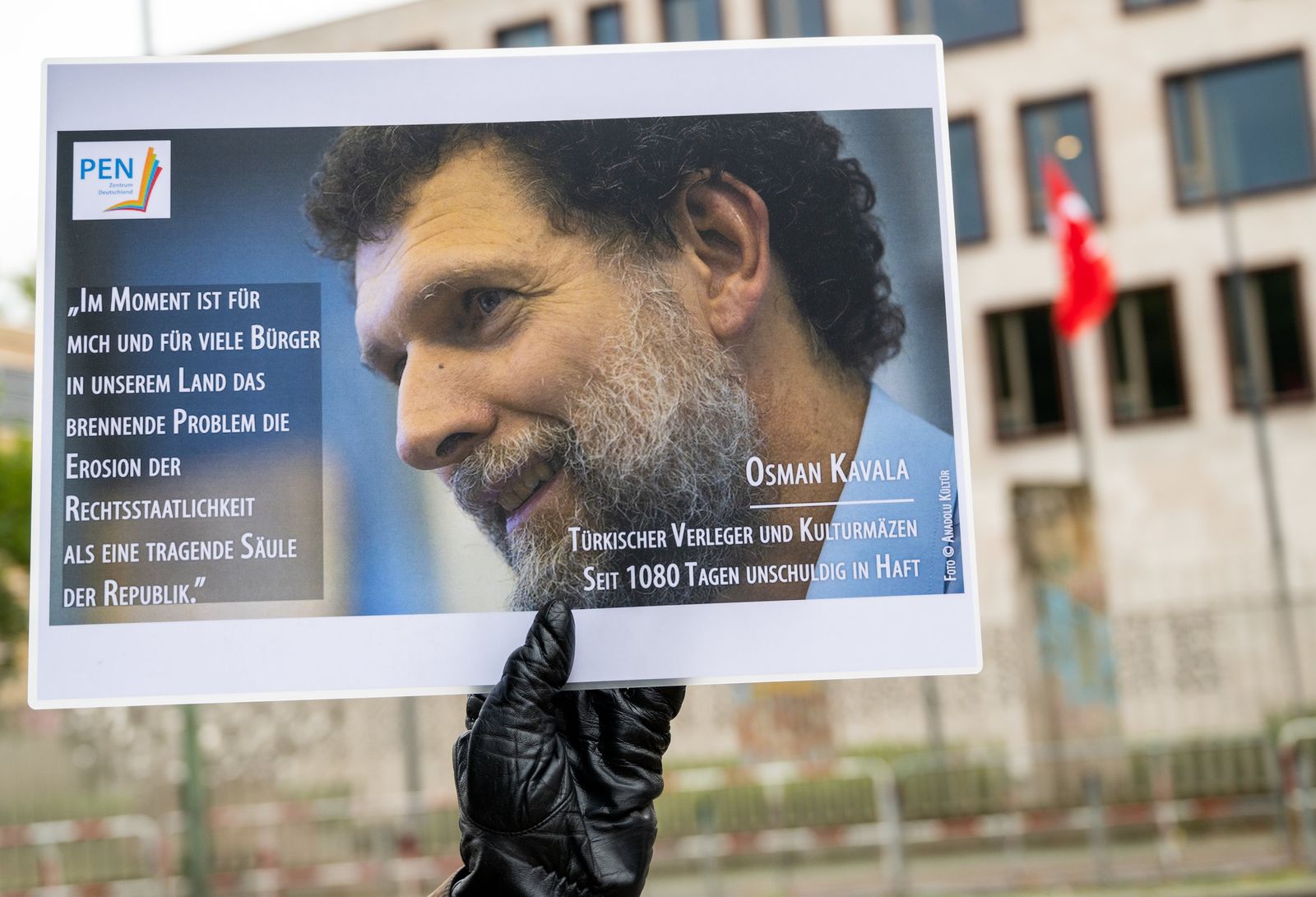 A vigil held for Osman Kavala in front of the Turkish Embassy in Berlin: "a highly emotional reaction" 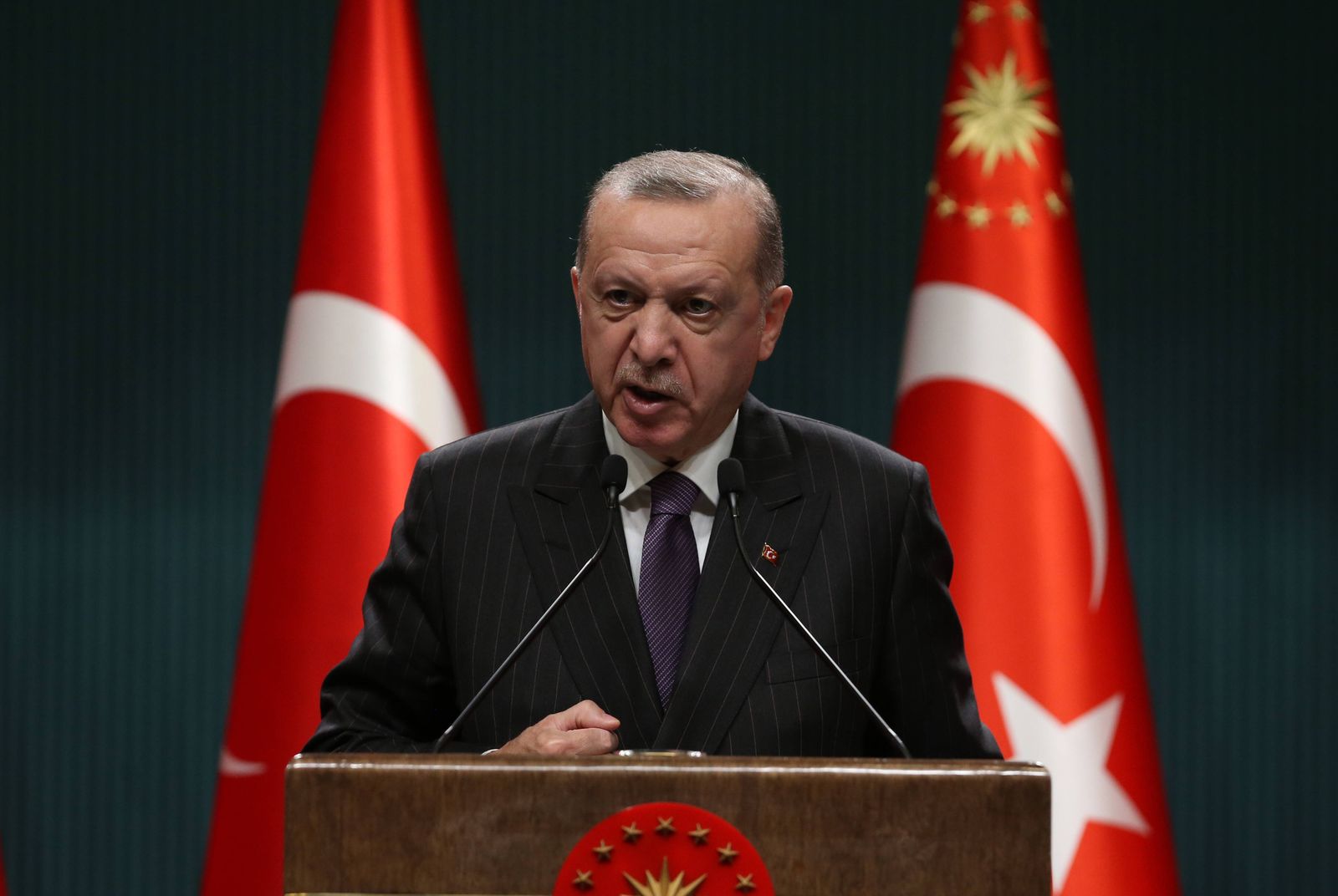