SPIEGEL: Mr. President, the whole world is waiting for you to meet with Israeli Prime Minister Benjamin Netanyahu for talks. When is this finally going to happen?

Abbas: That depends on Israel. We Palestinians have always said that we are willing to negotiate, but only if Israel stops settlement construction completely and recognizes the 1967 borders. 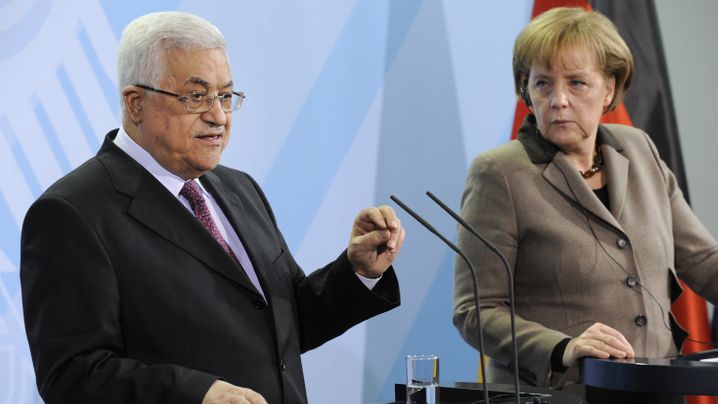 Photo Gallery: 'A Race Against Time to Reach a Conclusion'

SPIEGEL: Why are you standing in the way of talks by setting these preconditions?

Abbas: They aren't preconditions, but steps that are overdue after the first phase of the international roadmap for peace. Unlike Israel, we have met our obligations: We have recognized Israel's right to exist, and we are combating violent Palestinian groups. The Americans, the Europeans and even the Israelis have acknowledged this.

SPIEGEL: At least Netanyahu has ordered a 10-month freeze on settlements, something no other Israeli prime minister has done. Wouldn't it be your turn now to take a step in his direction?

Abbas: It isn't a real moratorium, because a few thousand housing units are still being built in the West Bank, and Jerusalem is completely exempted from the settlement freeze.

SPIEGEL: You negotiated with Netanyahu's predecessor, Ehud Olmert, even though settlement construction was continuing without restrictions at the time. Aren't you applying a double standard here?

Abbas: In a way, yes. But I have asked Olmert to freeze settlement construction every time we met. Besides, Barack Obama was elected president of the United States in the interim. In his speech to the Islamic world in Cairo, he called for a complete freeze on settlements. When the American president does this, I cannot accept anything less.

SPIEGEL: But now Obama is only talking about Israeli "restraint" in building settlements. At his request, you even agreed to a symbolic handshake with Netanyahu in New York.

Abbas: I was initially very optimistic after Obama won the election. His Middle East envoy, George Mitchell, kept coming to us and promised to urge the Israelis to stop settlement construction completely. Mitchell said that the negotiations would only resume after a moratorium. The American government suddenly backed away from this position in September.

SPIEGEL: Are you saying that it's the Americans' fault that things aren't progressing?

Abbas: Naturally, I'm not pleased with the Americans' change of course. But I will not back down.

SPIEGEL: What do you expect from Obama?

Abbas: I still hope that he will revive the peace process. At least he has to convince the Israelis to announce a complete freeze on construction in the West Bank and East Jerusalem for a few months.

SPIEGEL: Apparently the pressure Obama has exerted on Israel until now hasn't been very effective.

Abbas: It isn't my job to tell the Americans how to deal with Israel. But they have options. They are, after all, the most powerful country in the world. Obama said that a Palestinian state constitutes a vital American interest. The president is under an obligation to apply all of his energy to achieving peace and the vision of a Palestinian state.

SPIEGEL: Could it be that the real reason for the current standstill is that you don't trust Netanyahu?

Abbas: What he has said so far, at any rate, leads me to question whether he really wants a solution. He has not expressly accepted the two-state solution.

SPIEGEL: In a speech at Bar-Ilan University in June 2009, Netanyahu said: "If the Palestinians recognize Israel as the Jewish state, we are ready to agree to a real peace agreement, a demilitarized Palestinian state side by side with the Jewish state."

Abbas: You see, he's the one who is setting preconditions. He declares Jerusalem as the "undivided and eternal capital of the State of Israel." He refuses to discuss the question of Palestinian refugees. And he insists that we accept Israel in advance as a Jewish state.

SPIEGEL: But the principle of the two-state solution must mean that the one state is for the Palestinians and the other is for the Jews. Why do you have a problem with recognizing Israel as a Jewish state?

Abbas: We recognized the State of Israel within the 1967 borders. Whether it defines itself as a Jewish state, a Hebrew state or a Zionist state is its business. As far as I'm concerned, it can call itself what it pleases. But he cannot force me to agree with this definition.

SPIEGEL: Israel wouldn't be Israel without a Jewish majority.

Abbas: It is a fact that the majority of the citizens of the State of Israel are Jews. But it isn't within my power to define Israel's character.

SPIEGEL: But with such remarks, you create the suspicion among Israelis that you actually hope to eventually overcome this Jewish majority, particularly when you continue to insist that all Palestinians expelled in 1948 have the right of return.

Abbas: I understand these concerns. Today, there are 5 million Palestinian refugees. I'm not saying that they all have to return, but we need a fair solution. United Nations Resolution 194 ...

Abbas: ... states that those who relinquish their right of return must receive appropriate financial compensation for doing so. In other words, the solution has been on the table for 60 years, so what's the problem?

'Palestinians Never Miss an Ppportunity to Miss an Opportunity'

SPIEGEL: Netanyahu's predecessor Ehud Olmert made you the best offer: The establishment of a Palestinian state on far more than 90 percent of the West Bank, a division of Jerusalem and the return of a few thousand refugees to Israel. Why did you reject it?

Abbas: I didn't reject it. Olmert resigned from office because of his personal problems.

SPIEGEL: You waited too long. If you had accepted, most Israelis would probably have been willing to ignore the corruption charges against Olmert. Former Israeli Foreign Minister Abba Eban once said that the Palestinians never miss an opportunity ...

Abbas: ... to miss an opportunity. Yes, I'm familiar with the quote. But we did seize the opportunity when Olmert was in office. We negotiated very seriously with him. We exchanged maps showing the locations of the borders. Then he left office. His successor Tzipi Livni lost the subsequent election. So where is the opportunity that we missed?

SPIEGEL: If you had accepted Olmert's offer early enough, it would have strengthened those who support the peace process. Instead, you now have to make do with Messrs. Netanyahu and Lieberman.

Abbas: That's right. We were in a race against time to reach a solution. But I wasn't the one who thwarted an agreement. Olmert resigned from office shortly before the finish line.

SPIEGEL: Mr. President, the Palestinian camp is deeply divided. Your Fatah movement was unable to prevent Hamas's violent takeover in the Gaza Strip in 2007. How do you intend to guarantee that the same thing won't happen in the West Bank?

Abbas: We have complete control over the security apparatus in the West Bank. The situation is 100 percent stabile. We will not allow the same thing to happen in the West Bank that happened in Gaza.

SPIEGEL: As long as Hamas controls Gaza, Israel will never agree to the establishment of a Palestinian state.

Abbas: We spent two-and-a-half years conducting a dialogue sponsored by Egypt to seek reconciliation. It culminated in a document that we, representing Fatah, signed on Oct. 15, 2009. To this day, Hamas refuses to sign this document.

SPIEGEL: How can reconciliation be possible between the secular outlook of your Fatah movement and the Islamist worldview of Hamas?

Abbas: We are a people with different religious and political sentiments. Some are extremely religious, some are strictly secular and others are moderate. But we have been accustomed to living together for the past 60 years. All of these movements exist within the PLO.

SPIEGEL: Would Marwan Barghuti, the hero of the second Intifada, who is imprisoned in Israel, be someone who could bring about reconciliation between Fatah and Hamas?

Abbas: Marwan Barghuti is part of the leadership of Fatah. He is a member of the central committee of our movement. If he were released, it would be very advantageous for us. But not even Barghuti will be able to bring about reconciliation on his own. There is an external reason why Hamas isn't signing the document.

SPIEGEL: You are referring to Iran.

Abbas: That's what you said.

SPIEGEL: Mr. President, you have announced that you will not run again for the office of president of the Autonomous Authority. Is this an admission that you will no longer be able to make the Palestinian dream of a sovereign state a reality?

Abbas: That's absolutely correct. The road to a political solution is blocked. For that reason, I see no purpose in remaining president of the Autonomous Authority. And I also have a warning for the world: Do not drive the Palestinians to the point of total hopelessness.

3 Bilder Photo Gallery: 'A Race Against Time to Reach a Conclusion'