SPIEGEL: Mr. Kudrin, why have you described the past year as being, both politically and economically, a lost year for Russia? It sounds bitter.

Kudrin: Economic reform came to a standstill, and political reforms didn't produce the results I had hoped for. Although people can now elect governors directly once again, there are too many obstacles for candidates that are not backed by the government. But I do see one important, positive trend: A new, active civil society has developed.

SPIEGEL: But isn't it already on the wane once again? The number of people attending protests against President Vladimir Putin is declining.

Kudrin: You shouldn't base your assessment of civil society solely on the number of demonstrators. And besides, only a radical minority was calling for Putin's resignation at the first major demonstrations. The majority took to the streets because parliamentary elections were not being conducted fairly. But they recognized that a majority of the people elected Putin. Why then should Putin resign? The majority of the demonstrators didn't want the government overthrown from one day to the next. But it does want fundamental reforms.

SPIEGEL: What is the first thing that should be done?

Kudrin: Russia needs free elections. It will be a difficult and protracted process, which is something I pointed out in my speech at the mass demonstration way back in December 2011. Simply repeating the bogus parliamentary election, as some were demanding at the time, wouldn't have done much good. For the most part, it would have produced a similar outcome, because there wouldn't have been any strong, new parties yet. We have to develop new parties and pass laws that prevent election fraud. Candidates should have equal access to the media, and business owners who fund opposition parties should no longer be punished for doing so. The apparatus of state cannot be used to support a specific party. This has been so widespread until now that we even have a term for it in Russia: "administrative resources." Russia has to take a chance with more democracy.

SPIEGEL: Why didn't Putin seek a dialogue with the opposition instead of launching a series of repressive laws?

Kudrin: In the wake of obvious election fraud, I went to see him and proposed precisely such a dialogue. The time is ripe for more political competition. Putin didn't reject the idea at the time, but said that he would come back to it later on. Then he apparently weighed his options and chose a different path.

SPIEGEL: You and Putin have been friends since the 1990s and you could become prime minister if Dmitry Medvedev falls. You were also Russia's finance minister for 11 years. Is the president open to criticism from you and others?

Kudrin: He's a very good listener. He listens to all positions during meetings and then he makes his decision. Sometimes he supported me when most of the others were against me, and sometimes he didn't. Above all, Putin is pragmatic.

SPIEGEL: How successful was your attempt to mediate between Putin and the opposition?

Kudrin: I failed, but I'm glad I tried.

SPIEGEL: Last winter, you attended demonstrations for the first time. Yet you are a fiscal policy maker, a former cabinet member and many see you as something of a bureaucrat. Why did you take to the streets?

Kudrin: Because there were suddenly people streaming into the streets who thought the way I do. It wasn't just the 4,000 or 5,000 that attorney Alexey Navalny or former Deputy Prime Minister Boris Nemtsov had mobilized in the past, but between 50,000 and 70,000 people. They want democratic reforms and new leaders with sound judgment. The radicals who want every change to happen immediately are deceiving themselves. They are naïve and make unrealistic demands. You have to give the Kremlin a chance to change.

SPIEGEL: The Kremlin always claims that if truly free elections were to be held, communists and nationalists would come into power.

Kudrin: Unpleasant election outcomes are certainly possible in a democracy. There are laws that are meant to prevent extremists from coming into power. But I don't want to compromise when it comes to democracy and free elections.

SPIEGEL: Do you deny that there is an undertone of nationalism in post-Soviet Russia?

Kudrin: Xenophobia is widespread. But things are more complicated than that. There is a widespread attitude that I call "imperial syndrome." A sizeable number of Russians place their country above other nations and see neighboring countries as part of our zone of influence.

SPIEGEL: The Kremlin also encourages this nationalism. For instance, it responded to an American law barring entry to the United States to corrupt Russian officials by prohibiting the adoption of Russian children by Americans.

Kudrin: I'm against the constant anti-Western rhetoric, even if it's only intended for domestic ears. It's detrimental to the modernization of our economy, and of course it doesn't help make Moscow a global financial center. We need more openness. However, even worldly, well-educated Russians have a problem with other countries telling us how to manage our own, internal affairs. We don't want to degenerate into a zone of influence of the West.

SPIEGEL: Medvedev, when he was still president, relieved you of your cabinet duties in September 2011 because you were opposed to higher military expenditures. Now they're rising even further.

Kudrin: Medvedev was upset that, on the day he had to announce his intention not to run for president again, I said that I didn't want to be part of a new administration under his leadership. He apparently felt that he was being exposed as a lame duck. I had asked Putin long before that to remove me from office, because I didn't want to support the military budget. But then Putin urged me to stay until the end of my term.

SPIEGEL: What is your opinion of the powerful deputy premier, Dmitry Rogozin, and others who see an increase in military spending as the key to Russia's economic resurgence, and who point to the fact that the United States spends a great deal more on defense?

Kudrin: These people have forgotten that the arms race was one of the reasons for the demise of the Soviet Union. We were producing a lot of tanks and fighter jets at the time, while people were standing in line with their ration cards. We cannot repeat that mistake. The longer we delay the implementation of economic and political reforms, the worse it will get.

SPIEGEL: Are you not exaggerating? Russia has the world's third-largest foreign currency reserves, and the economy grew by more than 3.5 percent last year.

Kudrin: If the oil price falls sharply, we will quickly realize that our cushion isn't as thick as some believe. Then either taxes will have to be increased or military and social spending cut.

SPIEGEL: Which reforms would you introduce now?

Kudrin: I would increase the retirement age, which is now 60 for men and 55 for women. We also need more investment in infrastructure, such as roads, housing, power grids and water lines. We should stop distributing social benefits with a watering can. We need more privatization and fewer government-owned companies, along with more power and tax revenues for the regions.

SPIEGEL: You sound as if you wanted to replace Medvedev right away.

Kudrin: I'm just saying what needs to be done.

SPIEGEL: Putin recently had to dismiss his defense minister because of financial irregularities.

SPIEGEL: Do you have an antidote?

Kudrin: Yes. First, all government spending must be subject to strict controls. There is still the widespread illusion that all we have to do is throw a lot of money at things -- for kindergartens, agriculture, high-tech -- and everything will be fine. But the opposite is often the case. The more money the government makes available, the greater the corruption.

SPIEGEL: Europe is currently discussing a €17.5 billion ($23.3 billion) aid package for Cyprus. What's your response to the criticism that such a bailout would primarily benefit Russian oligarchs?

Kudrin: It's exaggerated. And it distracts from the fact that Cyprus was also a convenient tax haven for companies from the West for a long time. Western companies are just as apt to use offshore models around the world as Russian companies do in Cyprus.

SPIEGEL: You have often been called the world's best finance minister. How can the euro be saved?

Kudrin: Russia hopes that the euro zone will come to grips with its problems. But Europe isn't doing enough to achieve that end. Deficits in countries like Greece are still too high. Spain is also in a serious trouble. Both countries are effectively bankrupt. Greece and Spain cannot service their debts on their own. The European Central Bank (ECB) helps them by buying up government bonds.

SPIEGEL: Is that the right approach to solving the crisis?

Kudrin: The ECB is merely buying time, but at this rate the situation will only get worse. The European Union must proceed more decisively to reduce debt loads.

SPIEGEL: Wouldn't it be preferable to just write off the debt or a portion thereof?

Kudrin: I think that's a possibility if something is done to cushion the creditor banks. It would certainly be a step away from the precipice and toward stabilization of the markets.

SPIEGEL: Was introducing the euro the right thing to do in the first place?

Kudrin: Of course. I was very enthusiastic at the time. However, we can see today that not everything was well thought-out. The rules to prevent debt were not enforced strictly enough. Productivity is too low in some countries.

SPIEGEL: Do you believe that the euro zone will fall apart?

Kudrin: It can't be ruled out. The financial and economic crisis can quickly turn into a political crisis. People in the West are not prepared to drastically reduce their standard of living. At least Russia managed to do so peacefully in the 1990s. I'm not sure that this will succeed in Europe. The Europeans are living beyond their means. The social welfare state is not sustainable in its current form.

SPIEGEL: Does that also apply to Germany?

Kudrin: I'm afraid so, no matter how well Germany is doing today. Let's say the euro crisis costs Germany €100 billion a year. What will the Germans do if that number increases by another €50 billion? A strong fiscal union is needed to save and protect the euro. Are the German people prepared to allow some commissioners in Brussels to decide on their government spending and taxes?

SPIEGEL: Do you think a German withdrawal from the euro zone is conceivable?

Kudrin: Yes. Every solution will be expensive for Germany, whether it's saving the euro or withdrawing from the euro. Your country has yet to face that difficult political decision. 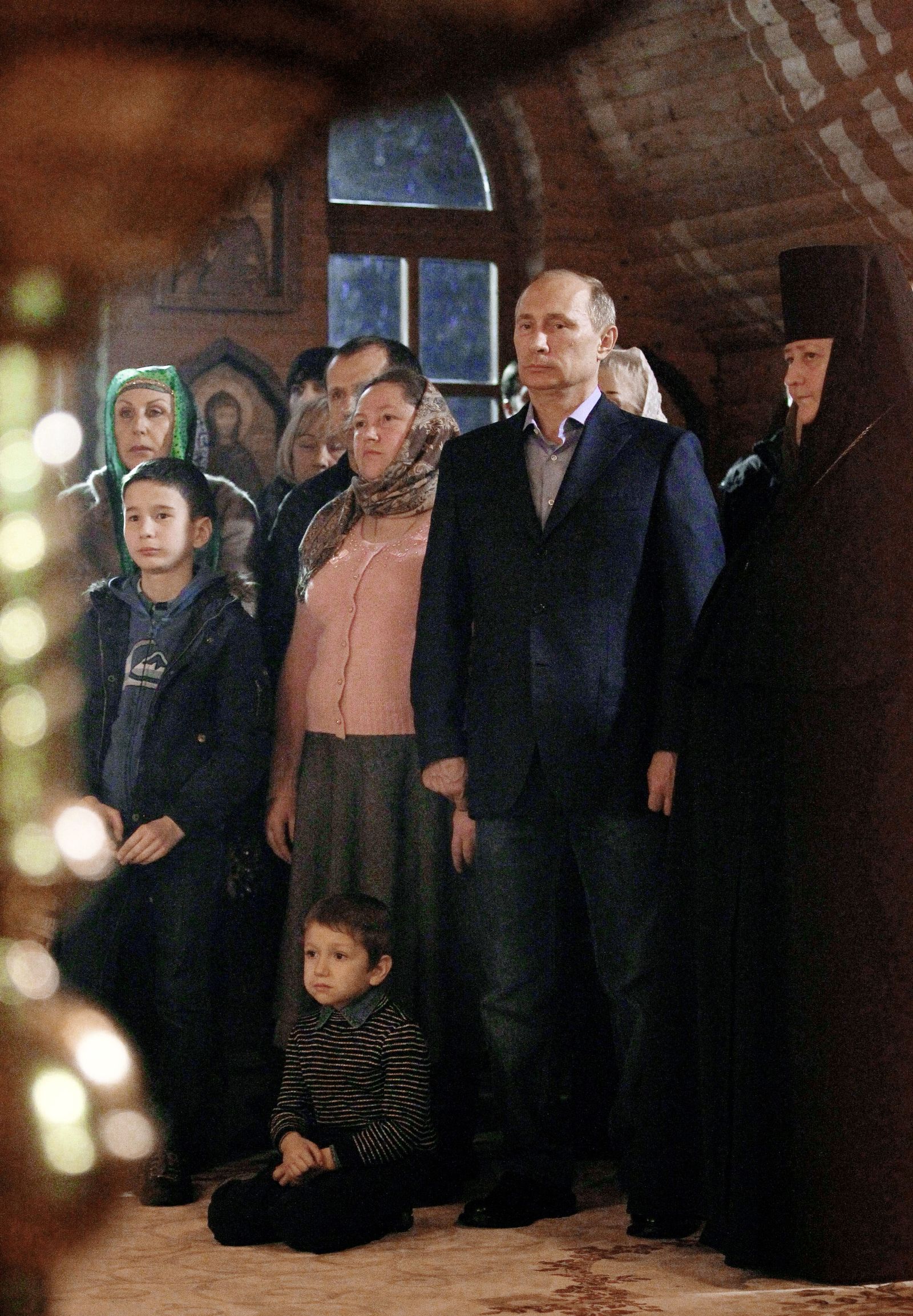 Russian President Vladimir Putin at a Christmas service in Sochi.