SPIEGEL ONLINE: Mr. Prokhorov, you own assets worth billions and now you plan to challenge Prime Minister Vladimir Putin in the presidential election this spring. What makes you think that a successful businessman makes a successful politician?

Prokhorov: That is no problem when that businessman has social skills to go with his leadership abilities. When I was head of the mining company Norilsk Nickel, I also handled the kindergartens, energy provision and housing construction. On a smaller scale, I have already done what is needed on a national level. It is good to have a president who has already achieved something in life.

SPIEGEL ONLINE: Don't you think that different rules apply to politics and business? Politicians have to vie for support in the public arena whereas businessmen take decisions behind closed doors.

Prokhorov: Many political decisions are also taken away from the public eye. That is one of Russia's biggest problems. Even in Western countries with their longer democratic traditions, public participation is not always as good as it should be. A businessman can lose his money and then earn it again. The currency in politics is trust. When you have lost people's trust once, it is hard to win it back again.

SPIEGEL ONLINE: The Russian people's loss of faith in Vladimir Putin has been dramatic. Why did his popularity ratings suddenly slide from 70 percent down to 50 percent according to official polls, or even 40 percent, according to an internal survey?

Prokhorov: His primary mistake occurred on the day of his United Russia party's convention at the end of September, when (outgoing President Dmitry) Medvedev and Putin announced they were simply going to trade places. That was cynical. It really angered people. The creative class then said: Wait a minute, we earn the taxes and so we earn respect and demand respect. People no longer remain silent when decisions are taken above their heads.

SPIEGEL ONLINE: Did the Kremlin send you into the running, to channel this dissatisfaction?

Prokhorov: I make my own decisions. That's what I'm used to. I was never anybody else's project.

SPIEGEL ONLINE: Does it offend you that your close acquaintance, former oil baron Mikhail Khodorkovsky who has been in prison for the past eight years and whose business was nationalized, called you a Kremlin project?

Prokhorov: No, I am not offended and am generally difficult to offend. It is my job to prove the opposite to the skeptics who want to tag me with the Kremlin label. I am sure that I could convince Khodorkovsky if I could just talk to him. Mikhail is an excellent, talented manager. He must have a difficult time right now and is sitting behind bars. When I become president, I will ensure that he is freed.

SPIEGEL ONLINE: You advocate a term limitations law that prevents a person from holding the same political office for more than two terms. What, then, would happen to Vladimir Putin, who is seeking to become president for a third time in March? Should he lead the energy company Gazprom and should Medvedev become the president of the Constitutional Court?

Prokhorov: I'm too busy to spend time thinking up such fantasies.

SPIEGEL ONLINE: You took part in the mass protests. One of the solutions offered was: "Russia without Putin." How do you like that slogan?

Prokhorov: I am in favor of a Russia with Putin, but also with the writer Boris Akunin and the blogger Alexei Navalny, both of whom called for Putin to step down. If the different sides don't manage to reconcile themselves we will, in the worst case, face civil war. The solution "Russia without Putin" does not inspire me. We don't need revolution, we need evolution.

SPIEGEL ONLINE: Why are you running against Putin in the election then?

Prokhorov: Precisely because we need evolution, new minds with new ideas. Putin deserves credit for what he's done. In particular, during the early years of his rule, he managed to unite a divided land and simplified the tax code. People's income rose. It is exactly this new middle class, these well-earning citizens, who refuse to go without their civil rights any longer.

SPIEGEL ONLINE: What three measures would you focus on first if you were elected president?

Prokhorov: For me it is important to establish competition in business and politics. When you go into a shop in our big cities, you can choose between dozens of refrigerators or tea pots. In politics people have little choice.

SPIEGEL ONLINE: What exactly do you want to change?

Prokhorov: I want to make it easier to establish new parties. The 7 percent hurdle for parliamentary representation should be lowered to 3 percent. The term of office should be reduced from recently decided-on six years back to four years. In the economy I will break up monopolies, like Gazprom for example. Third, I will give top priority to investments in education, science and culture. They are much more important than high military spending. At the moment no one is threatening our country.

SPIEGEL ONLINE: The Russians are not fond of oligarchs. How do you rate your chances of entering the Kremlin?

Prokhorov: There are prejudices against rich business people but not as many as there used to be. Above all the country is not fond of dishonest people.

SPIEGEL ONLINE: Why do you think that the reputation of rich people has improved?

Prokhorov: Because they create many jobs, invest in their country, engage in charity work and help people. On the campaign trail, I speak to many ordinary people. Again and again people come to me and say: I am actually a communist but I will vote for you because I know that you don't steal. This is the moment when successful and well off people should assume power instead of those who abuse their office to line their pockets.

SPIEGEL ONLINE: How far up the ranks is the corruption you describe? Are President Demitri Medvedev and Prime Minister Vladimir Putin corrupt?

Prokhorov: Slow down. Corruption is an inheritance from the Soviet Union, a consequence of an economy of scarcity. To buy meat you had to bribe the butcher. Those needing official authorization had to give the right officials a present and doctors got pralines or chocolate. A system developed based on double standards. We were all dissidents when we chatted at home in the kitchen but at work and in public we were followers of the communist party.

SPIEGEL ONLINE: But we asked if the system is corrupt from the top down?

Prokhorov: Also from there. There you find people with double standards. 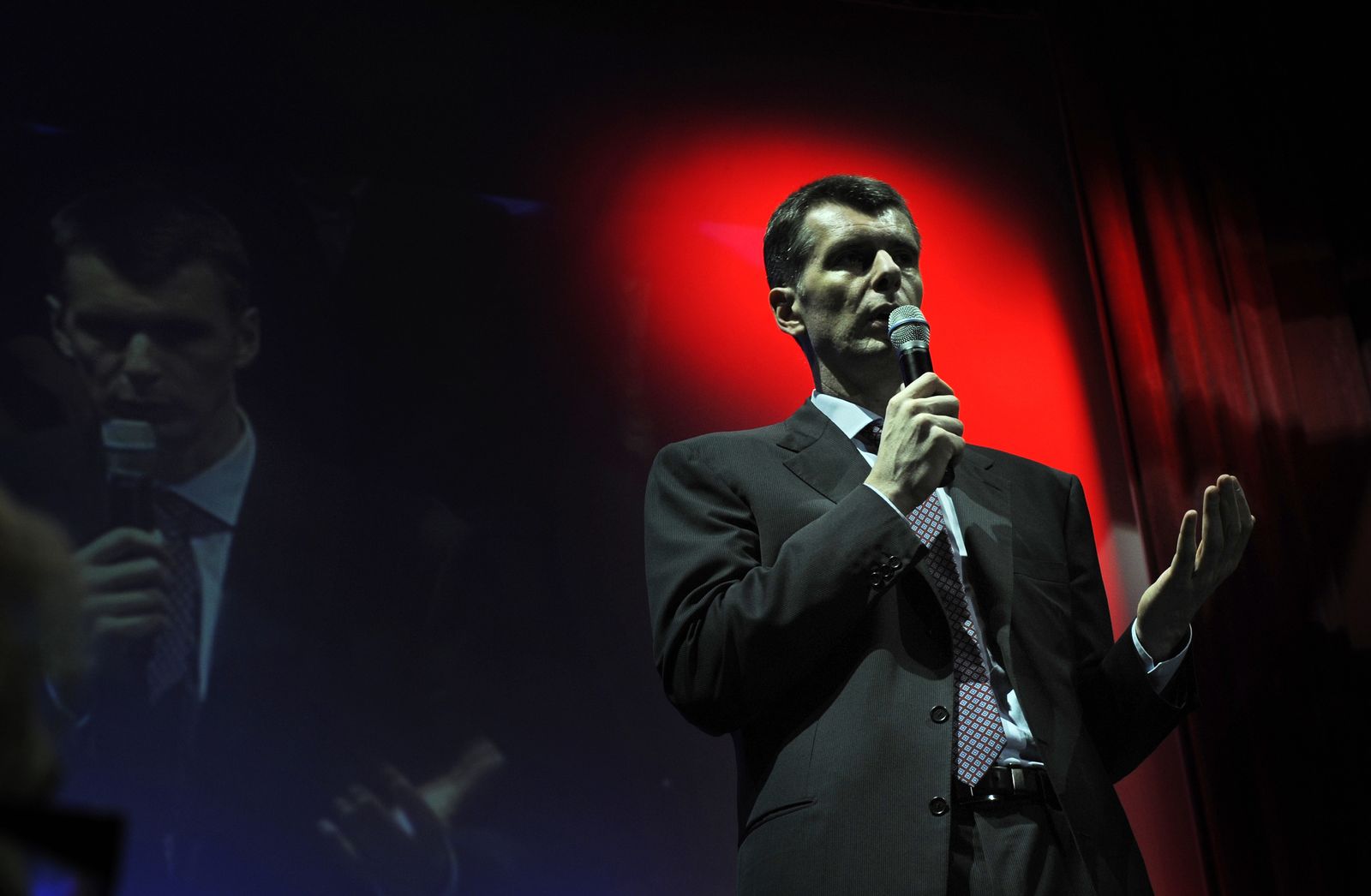 Russian billionaire Mikhail Prokhorov would like to take over for Dmitry Medvedev.